The Fast and the Furious is an incredibly unlikely franchise starter. These days, we know the various productions as the movies with flying cars and unconvincing government espionage. Back in 2001, however, director Rob Cohen simply wanted to showcase the super-cool Los Angeles street-racing scene. The resulting movie is niche and self-contained, making it kind of difficult to imagine how it could have inspired eight further installments (F9 drops this month). And yet, there’s a fizzy, exciting, almost illicit energy to The Fast and the Furious that’s irresistible. Sure, the members of the central gang are bad people, but they’re not terrible. Plus, they’re all such great drivers that it’s easy to let all the other stuff go — consider how often they beat L.A. traffic!

In pop culture, The Fast and the Furious is frequently dismissed as simply Point Break with cars, and to a certain extent it is just that. The brewing bromance between Vin Diesel’s alpha, Dom Toretto, and the late Paul Walker’s undercover cop, Brian O’Connor, fuels most of the tension. In real life, Diesel has spoken endlessly of their close bond, whether he’s bursting into song at awards shows or naming his daughter Pauline. The Fast and the Furious is mainly concerned with the two characters (and indeed the actors playing them) feeling each other out, but their rapport is charged with strange electricity right from the beginning. Dom is introduced first from Brian’s perspective, the back of his bald head to the rookie as the mysterious hard man takes a break in the Toretto family store. The two share a look that could easily be read as longing even before they’ve said a word to each other.

The Fast and the Furious isn’t subtle about the mutual attraction either — Dom is visibly crushed when he finally finds out the truth about Brian – with Matt Schulze’s Vince making several dodgy comments about Brian’s sexual orientation, even calling him the “F” word at one point. Although Brian gets grief from his superior officer (played by the great Ted Levine, with whom Walker appeared in the 2001 horror movie Joy Ride) about not being able to “see past” Dom’s sister, Mia (Jordana Brewster), it’s actually Dom himself who sullies Brian’s judgement. Like Patrick Swayze’s Bodhi in Point Break, Dom is clearly dangerous and maybe even slightly unhinged, but he’s also charming, effortlessly cool and quietly confident enough not to arrogantly assert dominance at every turn. Even when interjecting in a fistfight between Brian and Vince, after being dragged away from his car magazine by Mia, Dom keeps his cool, simply informing Brian he’s lost his job for behaving badly because that’s how much power Dom has in the local car scene.

More by Joey Keogh: Insinuendos in the Hacienda: ‘Sexy Beast’ at 20 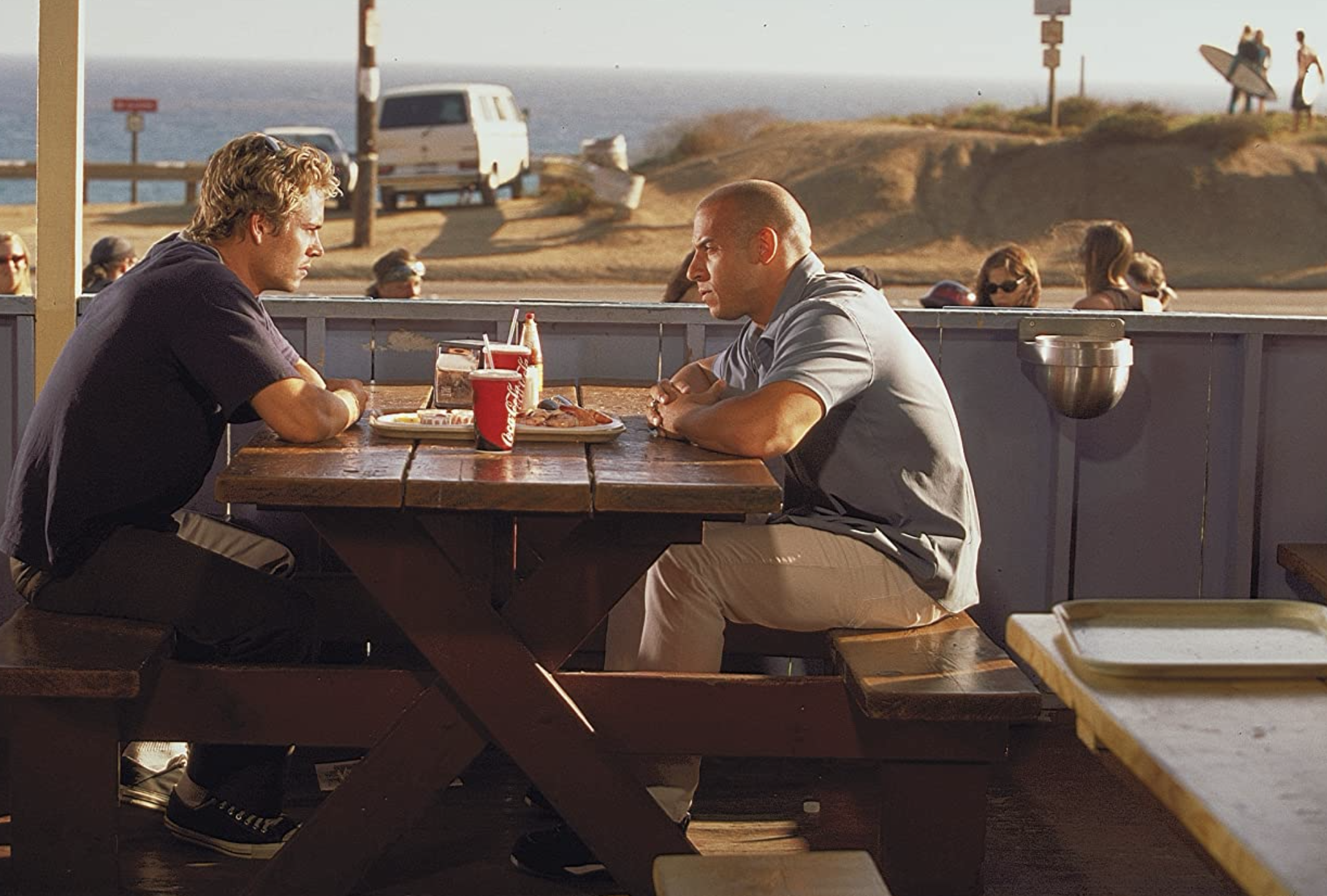 InThe Fast and the Furious, Diesel delivers his best performance of the entire franchise by a wide margin. He somehow gets less emotive as the series wears on, eventually refusing to raise his voice above a whisper. Offscreen, Diesel got into petty scraps with The Rock over who was allowed to throw the most punches in a single scene. Here’s a better question — who genuinely believes Diesel could beat The Rock in a fight? During The Fast and the Furious, Dom’s bad ass reputation is clear from the very first moment he appears, and it’s solidified by how other characters react to him, whether it’s Mia, Letty (Michelle Rodriguez) — whom has held a candle for Dom since they were little — or random racers and hangers-on (I have so many questions about these ladies’ lives outside the drag circuit). The camera admires human bodies in a similar manner to how it glides over the various cars on display, but it’s never more loving than when taking in Dom’s intimidating figure.

One sequence finds Diesel’s character emerging from the shadows like a silent predator, and Dom is just as quietly assured when he, Vince and Brian are hiding in a rival’s warehouse. The whole essence of Dom is the strained relationship with his father, whose beloved car the younger man can’t bring himself to drive. Brian’s boss tells him that Dom nearly beat a man to death with a wrench, however when the story is retold to Brian later, Diesel’s character puts an entirely different spin on it not by downplaying what he did but by sadly intoning that the victim takes the bus to work each day. From Dom’s perspective, the worst fate for a person is no longer being able to drive. Danger lurks on the periphery throughout The Fast and the Furious, the camera lingering just for a second on a gun sitting amongst the snacks at a party. The kind of crimes the film traffics in are low-level, with the central mystery surrounding who’s conducting a series of truck hijackings to steal and then sell on DVD — timely! A cool but unavoidably nerdy opening sequence sets the tone, soundtracked by something that plays like a Mike Shinoda off-cut, as a group of cars driven by a helmeted crew take on a massive semi in the middle of the night, which is mirrored at the end of the movie in daylight when everything goes to hell.

The Fast and the Furious’ eye-popping action sequences are tactile, practical and feel inherently dangerous. Many films are described as “high-octane thrill rides,” but Cohen’s movie is genuinely authentic. There’s verve and vivacity to these scenes, which captures how cool the filmmakers evidently thought they were and, crucially, really appeals to the audience. The Fast and the Furious kicks off at a decent clip and rarely lets up even when the core group sits down to enjoy a barbecue together. It’s a small, localized story, but the film is stuffed to bursting point with action and impressively tangible protagonists, too (something the series has clung to in a major way, at least as much as possible). The cast members all feel like real people, even if the lads get far more characterization than the ladies (Rodriguez has just a handful of lines, while Brewster is relegated to “sweet sister”). The Fast and the Furious is a proper L.A. movie through and through, with tons of lovely establishing shots of the city bleeding into nighttime and back into daylight again. Sun-drenched and sweaty, the actors look as though they’re baking onscreen, whether Letty is panting getting out of her car or Dom is sweating through his shirt. 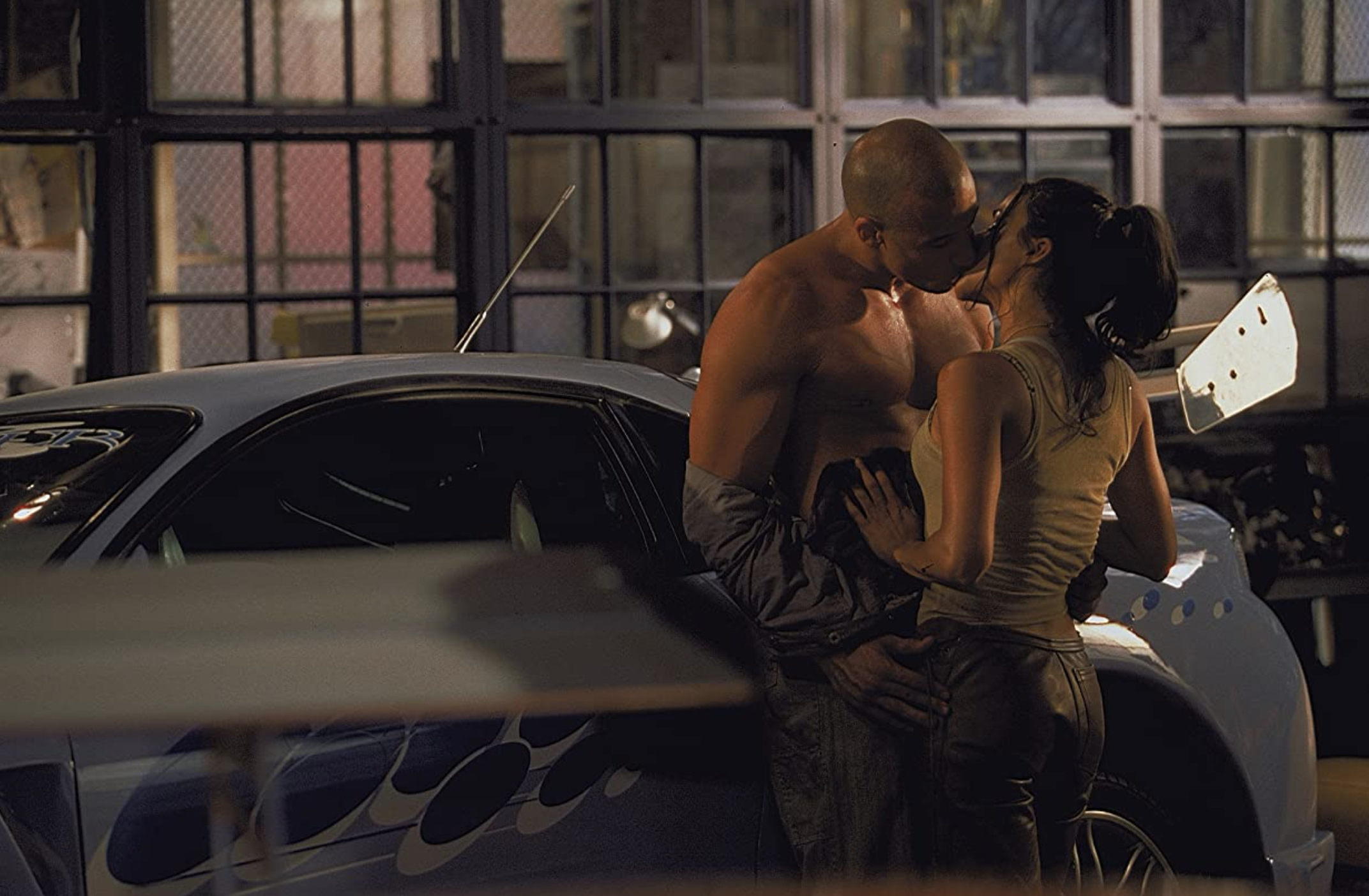 Universal Pictures released The Fast and the Furious in 2001, so the clothes are a goldmine of dodgy early-2000s style. The top of Mia’s jeans has been cut off to make them super low-rise, while Letty is introduced flaming New Rocks boots first. Tiny shades abound, as Dom proudly wears a Von Dutch shirt in several scenes, and there’s at least one thong on show. Plus, an enemy is dismissed due to his love of snakeskin pants. There are plenty of oddly specific details, in particular the proliferation of Corona beer, which quickly became a running joke in the franchise. The gang’s cars are color coded, while their rivals ride motorbikes. Rampant, unchecked machismo leaks out of the screen — the boys sit down to enjoy a Jackie Chan movie at one stage and women are offered as prizes for winning races. Plus, the amazingly dumb needle drops are hilariously era-specific, from forgotten nu-metal offshoot Dope, which scores a SWAT raid, to Benny Cassette’s very literal “Watch Your Back,” which hums along as tension mounts between Brian and Vince before kicking into high gear once they physically collide. The Fast and the Furious’ soundtrack shouldn’t work, but it totally does.

Similarly, the wonderfully ripe dialogue (“What is he, sandwich crazy?”) fits the goofy premise as perfectly as Dom’s black tank top. It’s worth noting that Gone in 60 Seconds was released just a year prior, and barely made a dent, likely because of how seriously that film took itself. Car analogies are a given in The Fast and the Furious, with Brian’s superior describing Dom as someone with an engine for a brain before dismissing peripheral characters as “fumes.” It’s a fool’s errand counting how many times the word “car” is uttered (and with different intonations), but the film is surprisingly funny even outside of all the silliness. There’s an easy camaraderie between the core cast, with The Fast and the Furious providing a snapshot of the characters’ lives in a visceral and surprisingly emotional way, especially when it comes to the brother-sister relationship between Dom and Mia, and also with Dom and his long-time buddy Vince. In a genuinely clever moment, Diesel’s character asserts that there was a time when they didn’t know each other, only for Vince to respond, “That was in the third grade!”

More by Joey Keogh: Put Your Hand Down, Little Steve: ‘Get Over It’ at 20 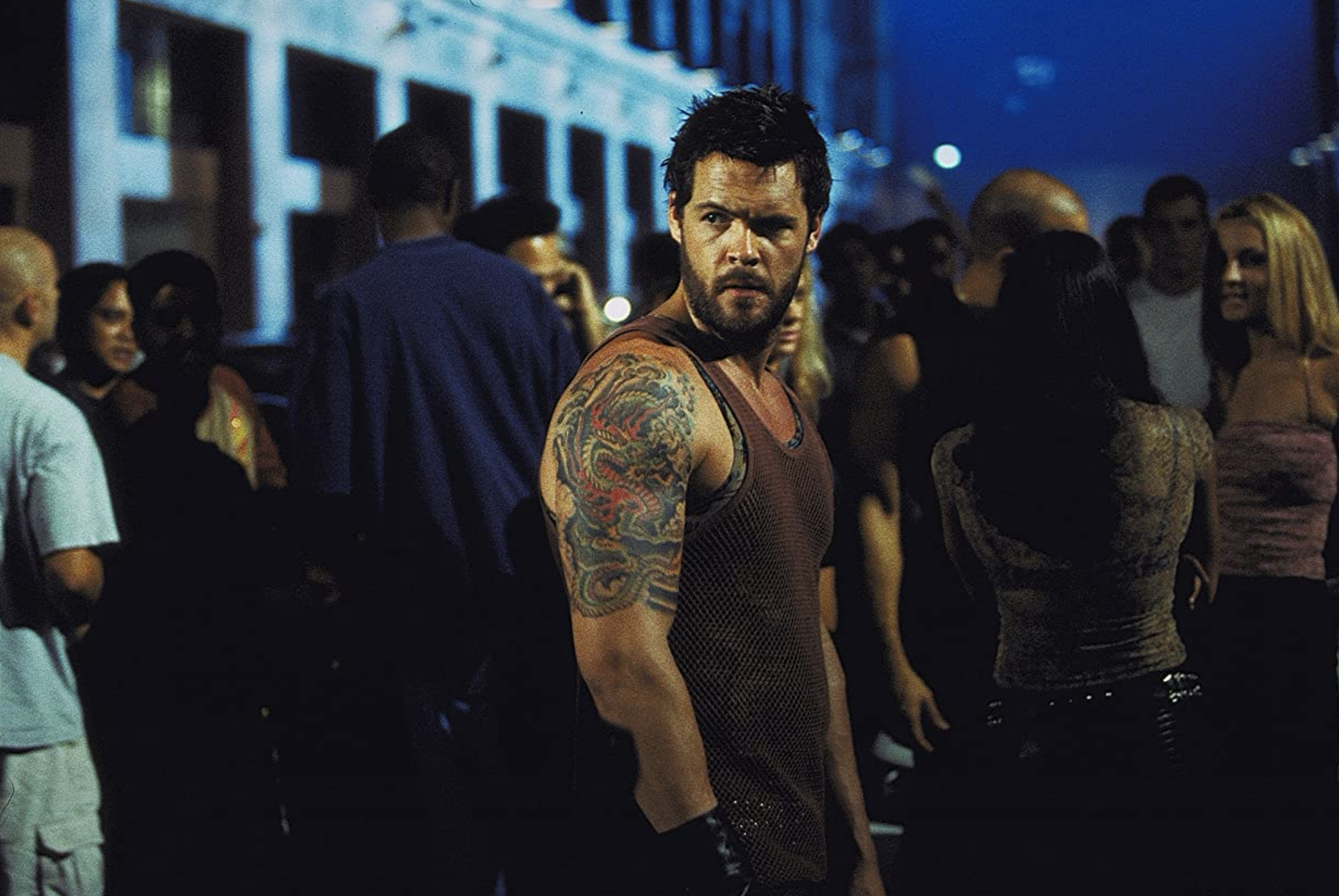 The F&F franchise is well-known for featuring plenty of actors of color upfront (which is funny considering the big racing competition the characters take part in is called, er, “Race Wars”), and the first film is no different. Notably, Walker and the rest of the cops are white while the drag racers Brian interacts with, along with their various associates, are predominantly not. There are almost too many people to keep track of in a way, but everybody gets their moment to shine, although poor Leon (Johnny Strong) and Johnny Tran (Rick Yune) have yet to be resurrected (Tran is technically dead, but that’s never mattered in this series). Just as Cohen was intrigued by the drag racing community, audiences have become enamored with The Fast and the Furious’ ragtag bunch of reckless drivers and petty thieves.

The relationship between the Dom and Brian is key in The Fast and the Furious. Much like in Point Break, the protagonist loves his nemesis too much to take him down. The final hijacking forms much of the final act, and it’s here when the duo’s devotion to each other is laid bare. However, there has to be a follow-up moment where Brian defiantly allows Dom to go free — otherwise, the message falls flat. The Fast and the Furious’ overarching theme is about chosen family, something Brian’s superior confronts him with at one point, not realizing that the younger man will opt for a more exciting life of crime once given the opportunity. As much as this is a dumb action movie about driving and behaving badly in Los Angeles, Cohen’s film (which has four credited screenwriters, including David Ayer) has a surprising amount of heart, too. Winning isn’t important — it’s the friends you make along the way.

Dom has a saying in The Fast and the Furious about living life a quarter mile at a time. The first film in the ludicrously popular franchise is the only one that really does that, and it’s better for it. Much has been written and discussed about where the series is now and where it could potentially go in the future, but it’s worth appreciating where F&F began 20 years after the original film’s release.