Edward Yang’s ‘Yi Yi’ in the Era of Social Distancing 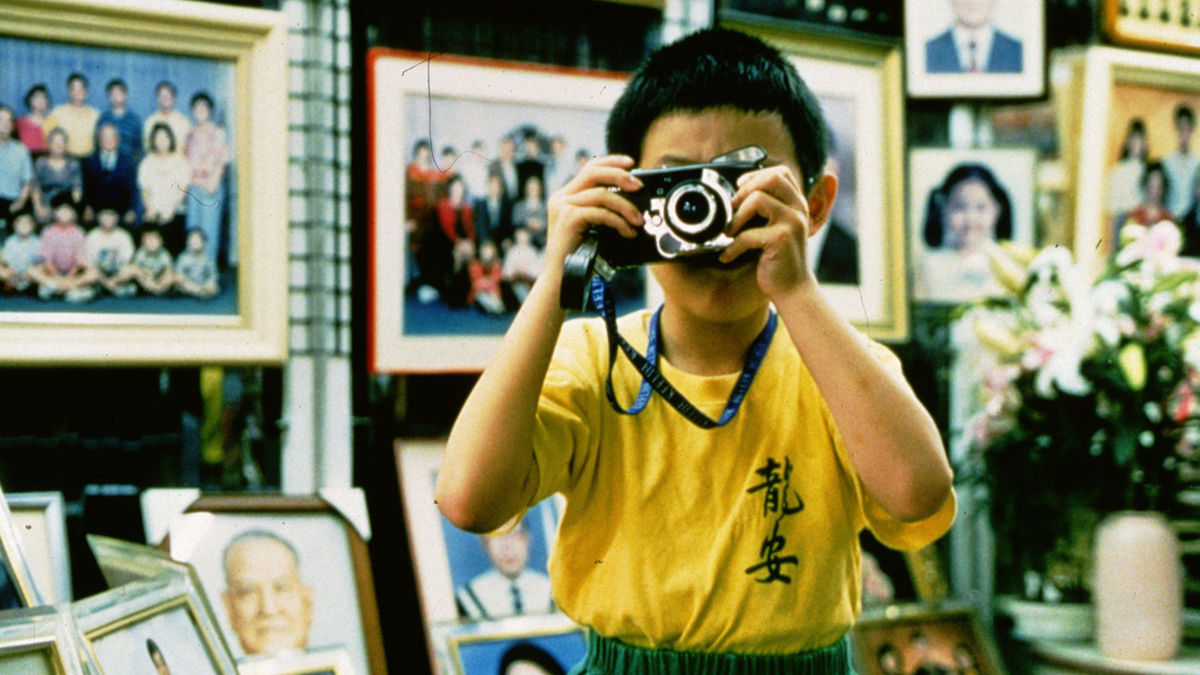 Released in 2000, Yi-Yi is a cinematic tapestry that weaves together life in a Taiwanese family bookended by a wedding and a funeral, two events that bring the film’s disparate relatives all in one place. Yi Yi is a sprawling, three-hour saga involving the city of Taipei and its intermingled inhabitants. Director Edward Yang choreographs the camera in relation to his actors with a kind of inherent social distancing, also lingering on reflections of characters in glass rather than their actual selves, and rarely going in for a close-up. If he did not maintain some detachment, he might have ended up with an overwrought melodrama, instead of an elegant, quietly devastating meditation on what it means to be alive. It’s a film that was highly acclaimed when it was released 20 years ago, and one that fascinates during our time of self-isolation.

The close-up is the emotional high watermark of a film, reserved purely for the most heart-rending moments of an actor’s performance. Traditional filmmaking guidelines rule that to move an audience, the camera (or focal length) must be close enough to the actor to properly capture their expression. Yang managed to keep a mostly six-foot distance between his camera and its subjects in Yi Yi.  It was an austere approach for aesthetic purposes, but one from which we can learn much during this pandemic. Yang’s gaze lingers on his actors, showcasing them like tulips in an urban garden. Characters touch each other out of affection or out of anger, while we — in 2020 — maintain strict measures of self-abnegation when it comes to social traditions like shaking hands. Yet many of us are still invested in the lives of people who reside in big cities.

The most urgent narrative at the heart of Yi Yi involves a married man and father to a young boy who has a chance meeting with a former lover he spurned 30 years earlier. Yang is an auteur who clearly understands how cinema can capture real life in all its pain, coincidence and winding timeline where meaningful people can disappear and re-appear in the entire lifetime of a child. Yi Yi is emotionally muted, slow and reflective of a pace of life undisrupted by modern distractions like smartphones. It takes place in the early infancy of internet technology in a major metropolitan area, yet there is no flash or sizzle. There are not many shots that take viewers inside what a character is feeling, and most of the time Yang shows people from above the top of their head to below their feet.

Early on, at the opening wedding reception, Yang stages a binge-drinking escapade that involves the groom. This party-hard mentality is international, but what separates it from how the scene might play in an American film is the camera’s emotional detachment. The composition is almost painterly in the way that viewers can see the interaction among the guests; Yang is not out to shove their revelry down our throats in a vicarious way. That would be distasteful. Alternately, the dispassionate, frozen camera records the movement of the whole bunch of revelers, from the accomplices that egg the groom on to the outliers in the back who are more emotionally removed from participating. Yi Yi sets up a world, undoubtedly sprung from Taiwanese culture, where audiences can watch ordinary people negotiate their needs with one another without crossing a boundary that upsets the balance of its delicate tone. The result is a film that feels truly lived by its characters and an experience of time as distinct as the memory of a first love lost.

More by Philip Brubaker: Sharing the Cinematic Bathwater: From Wim to Jim 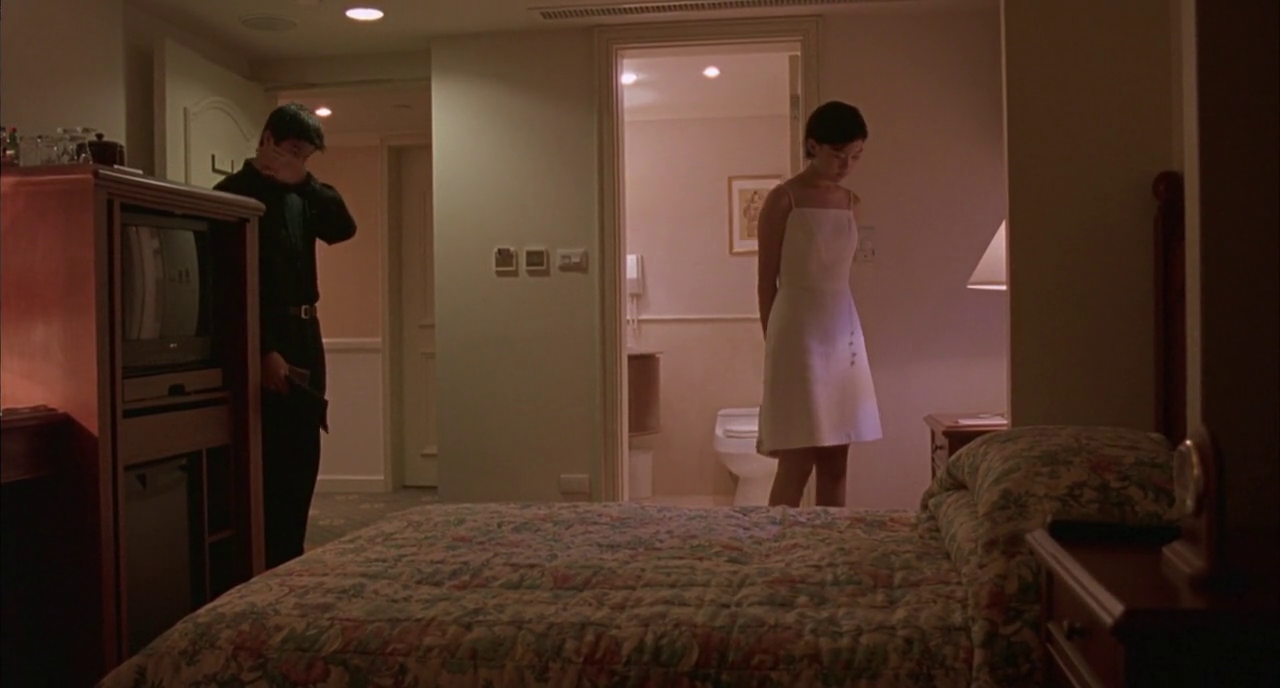 Several times throughout Yi Yi, Yang films a conversation between two people walking through the concrete jungle of Taipei from a great physical distance. Even the dialogue is quiet, but thanks to subtitles, viewers can easily follow along. When the young couple pauses on the sidewalk to express their true feelings to each other, they are surrounded by curving roads and the anempathetic sounds of cars that wind through the veins of the city. Consistent with the realist perspective of Yi Yi, the cinematography never takes the audience somewhere one can’t naturally be with their own eyes. “In my heart, there’s only you”, says the male character to the girl. The traffic lights change to green immediately after he tells the girl he loves her. A happy accident? Most likely, but its results are in the picture. Is it true love or is he just trying to get her in bed? The signal is to go, go, go three times over in three different concurrent traffic signals. Yang’s palette encompasses the wide, impersonal nature of their surroundings, which makes the relative smallness of their love more poignant.

Yang also makes poetic use of reflections throughout Yi Yi’s three-hour running time. By juxtaposing characters with glass windows that refract the many lights and skyscrapers of Taipei, the director creates a double image that is arrestingly surreal, yet bound to the realism of the story. By revisiting this method of cinematography throughout Yi Yi, Yang weaves in a city symphony dedicated to Taipei, wrapped in the folds of familial turmoil that take the foreground. When NJ and his colleagues drive through the city after a business lunch, the towering buildings are curved and refracted in the windshield glass followed by a scene in a café, also filmed from behind glass with the motion of yellow taxis that glide by. Yang seems to understand that cinema is movement, and he keeps the frame active at all times, even in dialogue scenes where characters stand still.

Yang’s cinema is also like life in the sense that chance has a devastating effect on the lives of his characters. While the early vignettes surrounding the wedding may at first seem episodic, such as little Yang-Yang’s bullying, the sequence is in the larger service of the causality of the film. If Yang-Yang had not been bullied, he wouldn’t have demanded his father take him to McDonald’s; if they hadn’t gone to McDonald’s, they wouldn’t have walked back to the hotel to the elevators; if the first elevator door they tried had worked, NJ wouldn’t have met Sherry coming out of the second. The engine of the story is therefore put in motion. The wedding is held on this particular day because the almanac considers it the luckiest day of the year — lucky for the bride and groom, but experienced differently for NJ and Sherry. 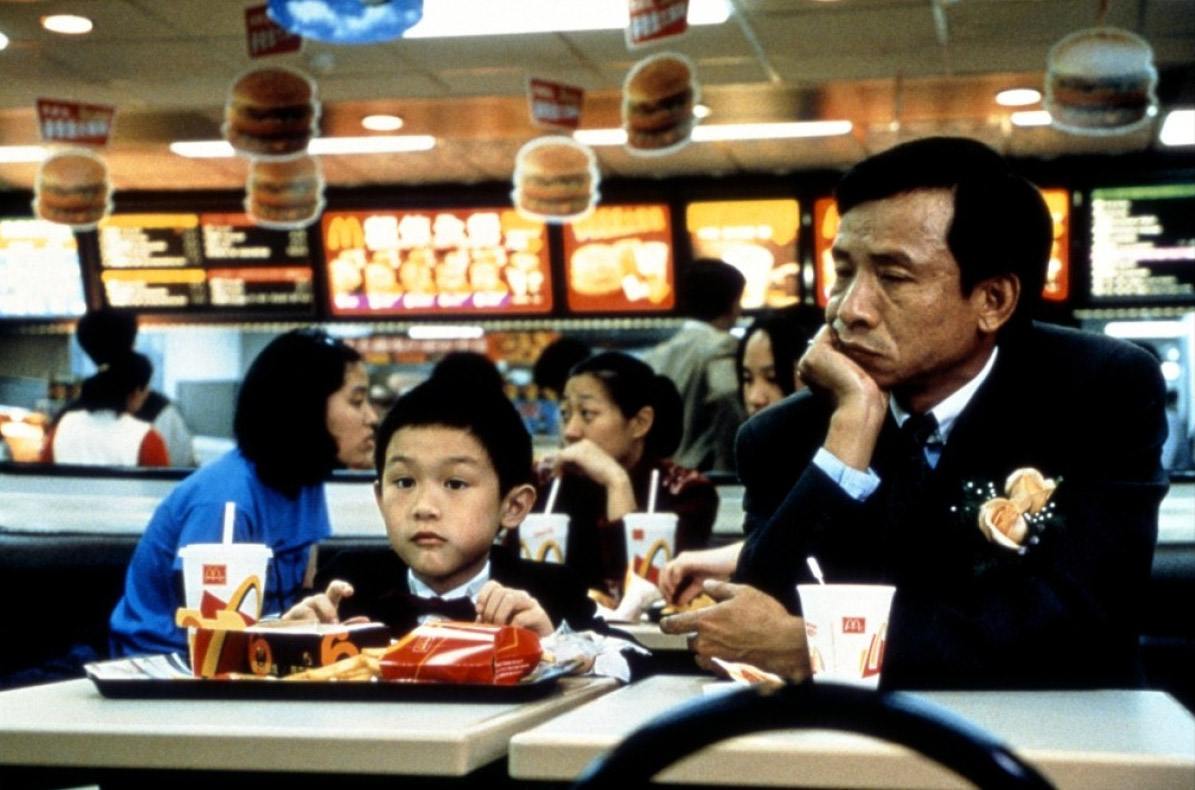 Yi Yi holds its distance from its characters in a way that may challenge the attention span of today’s viewers, and the lack of instant gratification by way of constant humor or excitement forces one to develop interest in the big picture of each character’s life. There is intermittent charm surrounding the life of Yang-Yang, an adorable child who is bullied by taller girls and his callous teacher. But for the most part, Yang focuses on the heartbreak of life and how it can linger with a person for decades. Working with a three-hour film that depicts life in real time opens up that space in the diegesis to address time itself, as Sherry’s memories from childhood can cause her to sob with uncontrollable rage in a city park 30 years later, as if those wounds were freshly sowed.

The plot of Yi Yi is spare, and the payoff does not really occur until it is over, not to say that everything coalesces and is resolved. But there is a cumulative understanding, much like how a person can look back on their life many years later and finally understand what their sadness meant, despite not being able to change any of it.

There is a rich tradition of directors making movies about children who are actually stand-ins for the filmmakers themselves. Take a look at Ingmar Bergman’s Alexander or François Truffaut’s Antoine Doinel; the wisdom and resourcefulness that children seem to naturally possess can get misunderstood by their peers and authority figures. When Yang-Yang’s teacher looks at his photographs of mosquitoes, he sees only poorly composed shots of the ceiling, which he immediately writes off as “avant garde” art, and which reveals him to be not only insensitive to his student’s abilities but also ignorant of the larger art world. The first close-up in Yi Yi is of Yang-Yang, who mopes at the wedding reception after he is harassed by the taller girls who remove his shoe and toss it away, only to flee the scene cackling, “Don’t mess with girls!”  Yang-Yang discovers the wonder of elastic balloons, especially as a means of revenge. He experiments by inflating a water balloon, which he inadvertently drops on his oppressive teacher while he aimed for a girl bully. When Yang-Yang attends the funeral of a family member and speaks from the heart, the audience learns about his true thoughtfulness.

“Do you know what I want to do when I grow up? I want to tell people things they don’t know. Show them stuff they haven’t seen. It’ll be so much fun. Perhaps one day…” 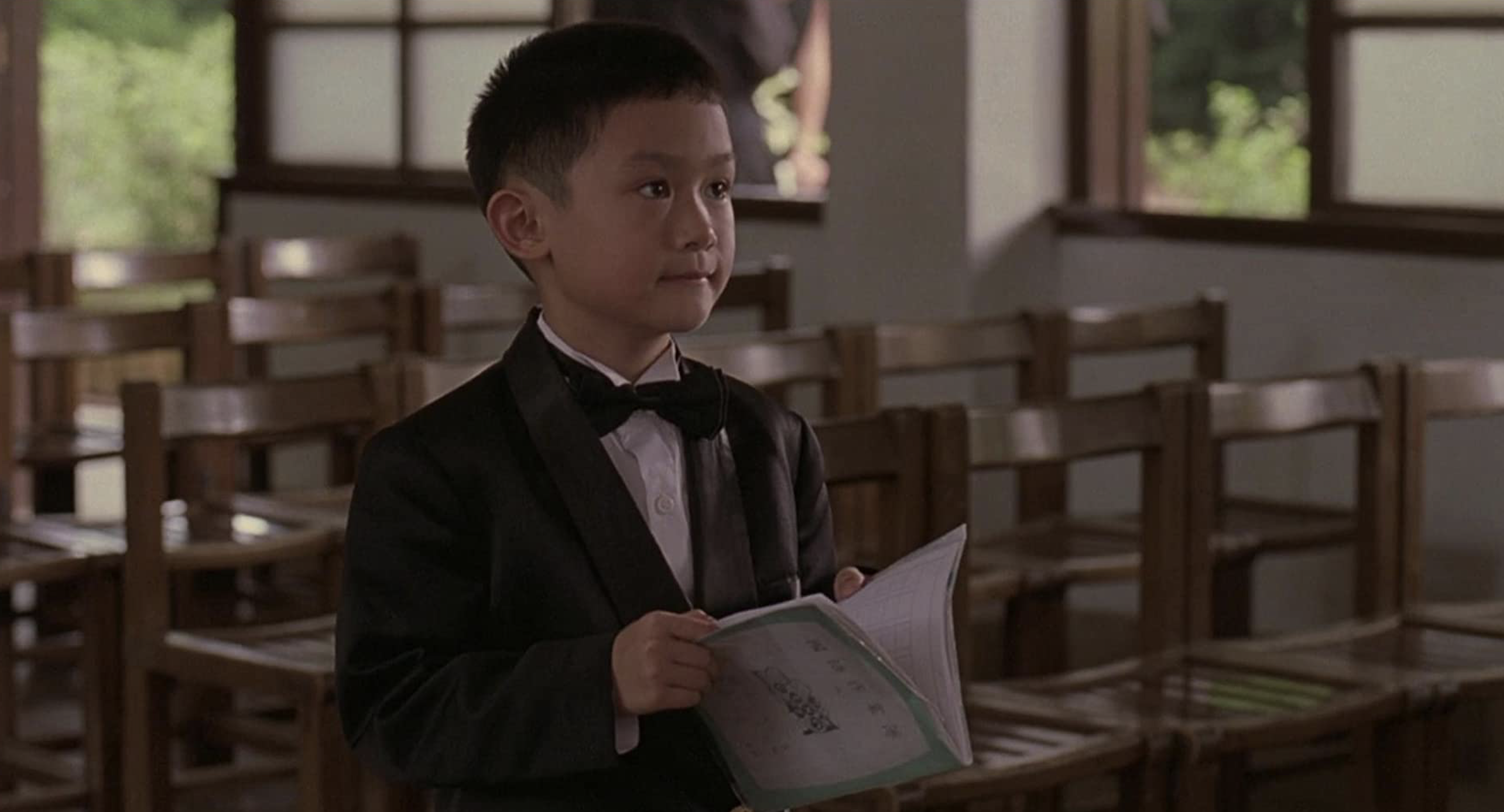 This quote all but cements the notion that Yang-Yang is a little stand-in for the director himself, still a child but already aware of his desire to make art about people to share with people. Yang has already begun the journey by taking still photos. He photographs the back of people’s heads so that they can see “behind them,” which is how he understands our capacity to reckon with our past. It’s the journey Yang-Yang’s father must take when he reunites with Sherry, his old flame.

At the end, Yang-Yang feels everything he has experienced across his entire brief lifetime. To him, it feels epic. It serves as a reminder that our concept of time is relative. For Yang’s final film, he received the Best Director prize at Cannes. It’s such an interesting distinction between winning Best Director and winning the top honor, the Palme D’Or. Both awards go to the director, but — in this case — it would seem the jury admired the consistency of Yang’s vision and approach, even if the finished product may not have been the most stunning film in their eyes (the Golden Palm winner that year was Lars Von Trier’s anti-musical Dancer in the Dark). The way Yang guides his acting ensemble through the various surprises and catastrophic events that befall the characters is subtle yet steady. The closeness viewers may feel to NJ, Sherry and others is not due to their proximity to the camera, which mostly keeps a respectful distance, but through the way they reveal who they are in the face of one devastating crisis after another.

It is fitting that a film about a family begins with a wedding and ends with a funeral. Are these not the primary reasons why extended family members get together? First, out of joy, then out of sadness? Yang died seven years after his last feature was released. Yi Yi is a film for grown ups in the sense that the characters have lived long enough to understand how memories of people can stay with them over the course of their lives. Keeping your distance from people is not the same as giving up on them.

Philip Brubaker (@lens_itself) is a writer-filmmaker and has contributed video essays to Fandor and MUBI. He lives in Florida where he avoids stepping on lizards daily and draws inspiration from Spanish moss.