It’s a story structure as old as drama itself: some terrible event occurs suddenly, and a group of characters must react and overcome the conflict. In a way, the building blocks of the disaster movie have been a part of storytelling since time began, and while the more personal and intimate types of disaster have always been dramatized in various mediums, the scale of motion pictures begged for incidents of a larger nature. Yet the modern definition of the disaster movie didn’t truly begin until the 1970s. In that time, the genre went from an exciting new style of mass entertainment to a cliché-ridden format that could be easily spoofed. It is during the 70s that the disaster film’s most pure and admirable entries were made, bookended by two significantly different stories involving air travel fiascos.

The disaster film didn’t emerge from nowhere, of course, for as early as the birth of motion pictures there were films being made about humanity enduring cataclysmic events. Movies like The Last Days of Pompeii (1908) and The End of the World (1916) were early examples of filmmakers utilizing the expansive abilities of the medium to depict disasters both historical and speculative, and the trend only continued as motion pictures became more popular. Films about natural disasters were common given mankind’s first-hand experience with them: earthquake movies like Deluge (1933) and San Francisco (1936); storm movies like Tornado (1943) and The Hurricane (1937); other films about floods, locust attacks and more. At one point, the disaster film combined forces with the adventure film, exploiting then-modern fears about exploring exotic lands in movies like The Lost World (1925) and the 1933 classic King Kong. The latter film kicked off its own giant monster movie genre, one that came to fruition during the 1950s. While those films depicted angry creatures devastating civilization, the implication was usually that these creatures were an extension of nature, a disaster that could not be avoided. Movies like The Lost Continent (1968) and Krakatoa, East of Java (1968) saw an ensemble of characters encountering prehistoric creatures as well as natural disasters. The Cold War paranoia of the 1950s and 60s resulted in a ton of Atomic Age fears being exploited on film — many of these stories involved the still unknown long-term effects of radiation and the threat of nuclear winter, some of them worried about new consumer-level technology and transport simply failing to function. In The High and the Mighty (1954) and Zero Hour (1957), two unexpected occurrences (a broken propeller and food poisoning, respectively) kick off a chain of events that jeopardize the lives of passengers and crew aboard commercial air flights. Few of these films follow the structure of the classic disaster movie as modern audiences came to understand it, but it’s clear that the genre was going to form sooner or later. 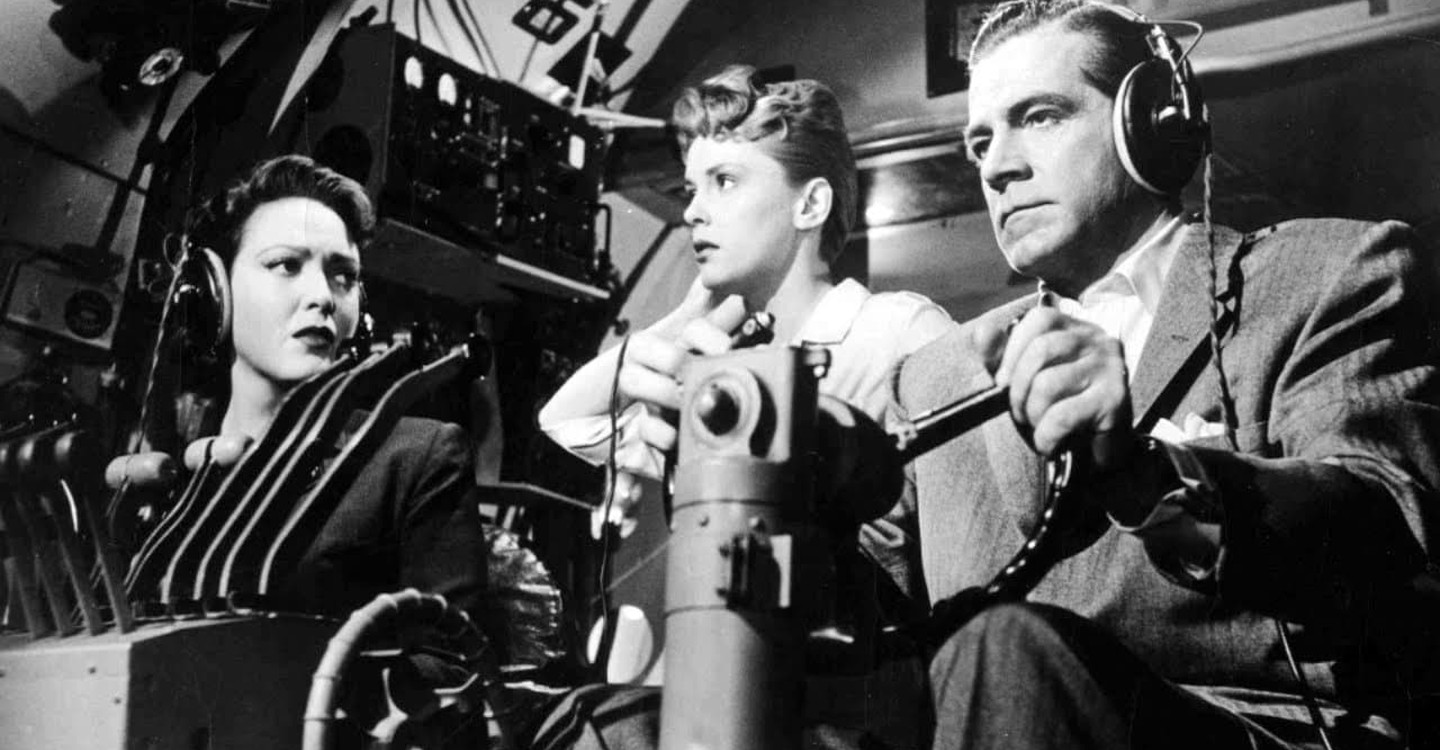 That formation occurred in 1970, when producer Ross Hunter secured the rights to adapt Arthur Hailey’s novel Airport. The novel had been a best seller upon its publishing in 1968, and its reputation as a harrowing suspense story featuring soap opera-esque characters was seen by Hunter as a way of laterally moving away from the romantic comedies he’d been producing during the 50s and 60s such as Pillow Talk (1959) starring Doris Day. Hiring veteran director George Seaton — who was best known at the time for Miracle on 34th Street (1947) — to write and helm the picture, the resulting film adaptation of Airport bears the hallmarks of both men: there are many charming dialogue scenes between two characters that mostly concern their relationships, and there are more split-screen phone conversations present than, well, a Doris Day film. As a result, Airport is rather unassuming as a disaster movie, with its literary roots translating into it being much more of a character-based film than an effects-driven spectacle. Its focus is primarily on the men and women who run the titular bustling building, the implication being that the events of Airport are exceptional but not entirely out of the ordinary for them. While the tension and suspense of the main disaster — a mentally-ill bomber blowing a hole in a 707 mid-air — is built up over the course of the story, it occurs 100 minutes into the film’s 137-minute run time. Compared to the disaster films to follow, that leaves Airport feeling like it has an overlong first act. Still, the basic building blocks of the modern disaster film were present: an ensemble cast of big stars (Burt Lancaster, Dean Martin, Jean Seberg, Jacqueline Bisset and George Kennedy, to name just a few); character traits and plot points that become liabilities when the disaster happens; a focus on people coming together to weather the events they’re suddenly faced with. More than anything else, Airport’s huge success at the box office inspired other studios and producers to take note, and to see what other disasters could be exploited for profit.

While Hollywood scrambled to take advantage of Airport’s success, another book adaptation hit screens in 1971 that helped establish the disaster film as a bonafide draw. Author Michael Crichton, whose works over the next few decades would come to influence both disaster as well as sci-fi and horror films, had his first big literary hit (under his own name, at least) with The Andromeda Strain (1969), a realistic yet fictional account of scientists encountering a deadly virus brought back by a U.S. space probe. The novel and its cinematic adaptation intersect with a number of genres — it’s part conspiracy thriller, part “alien invasion,” part viral outbreak horror and part procedural (not a whodunit, but a howdunit). Its place within the disaster film canon isn’t typically cited, yet it’s director Robert Wise and screenwriter Nelson Gidding’s grounded approach to the material that allows it to work as a disaster film. Universal Pictures saw The Andromeda Strain as part of the genre right away, exhibiting it on a double bill with Airport in 1972. Indeed, the film bears the basic disaster movie structure: an ensemble of characters (although deliberately played by non-movie stars) are forced to deal with a natural, if extraterrestrial, phenomenon that they must overcome, one that bears them no personal ill will but is nonetheless destructive. The Andromeda Strain fits into several genres in a variety of ways, and its moderate box office success continued to prove the disaster film format had an audience.

More by Bill Bria: Tone in the Films of Joe Dante: Attack of the Multi-Layers!

The genre format found its template and creative guru in 1972 with producer Irwin Allen and his production of The Poseidon Adventure. Like most of the early disaster movies, the film directed by Ronald Neame was originally a successful novel, written by Paul Gallico in 1969, inspired by an incident he experienced as a boy when the Queen Mary was nearly tipped over by a rogue wave. Allen, already a prolific producer of television, saw his opportunity to make a return to the big screen, counter-programming against the trend of more serious-minded New Hollywood films of the time — The Poseidon Adventure’s marketing touted it as “the return of the movie movie,” playing up the scale of the film. The marketing didn’t lie: here, finally, was the prototypical disaster film, a movie where the spectacle of a luxury liner being capsized on New Year’s Eve was both the inciting incident and the main attraction. The Poseidon Adventure features an ensemble of characters played by big stars (Gene Hackman, fresh from 1971’s The French Connection, Shelley Winters, Ernest Borgnine and Leslie Nielsen) as well as solid character actors (Stella Stevens, Red Buttons and Roddy McDowall) whose storylines primarily involve their reactions to the disaster rather than issues apart from it. Allen and Neame staged elaborate setpieces of suspense and survival that followed the initial disaster, made up primarily of practical, in-camera effects. Screenwriter Sterling Silliphant created a structure that saw the drama spiral logically out of the initial disaster, never letting the story become too broad or distracted. Just as with Halloween’s relationship to the slasher film boom in the early 80s, the disaster movie would get bigger and wilder from here, but would always have The Poseidon Adventure to fall back on as an outline. During the next few years after the film’s huge theatrical run, Hollywood studios would chase its box office success with an increasing number of their own disaster films, and Allen would embrace his newfound role as the “Master of Disaster” with another effort that he hoped would tower above his first.