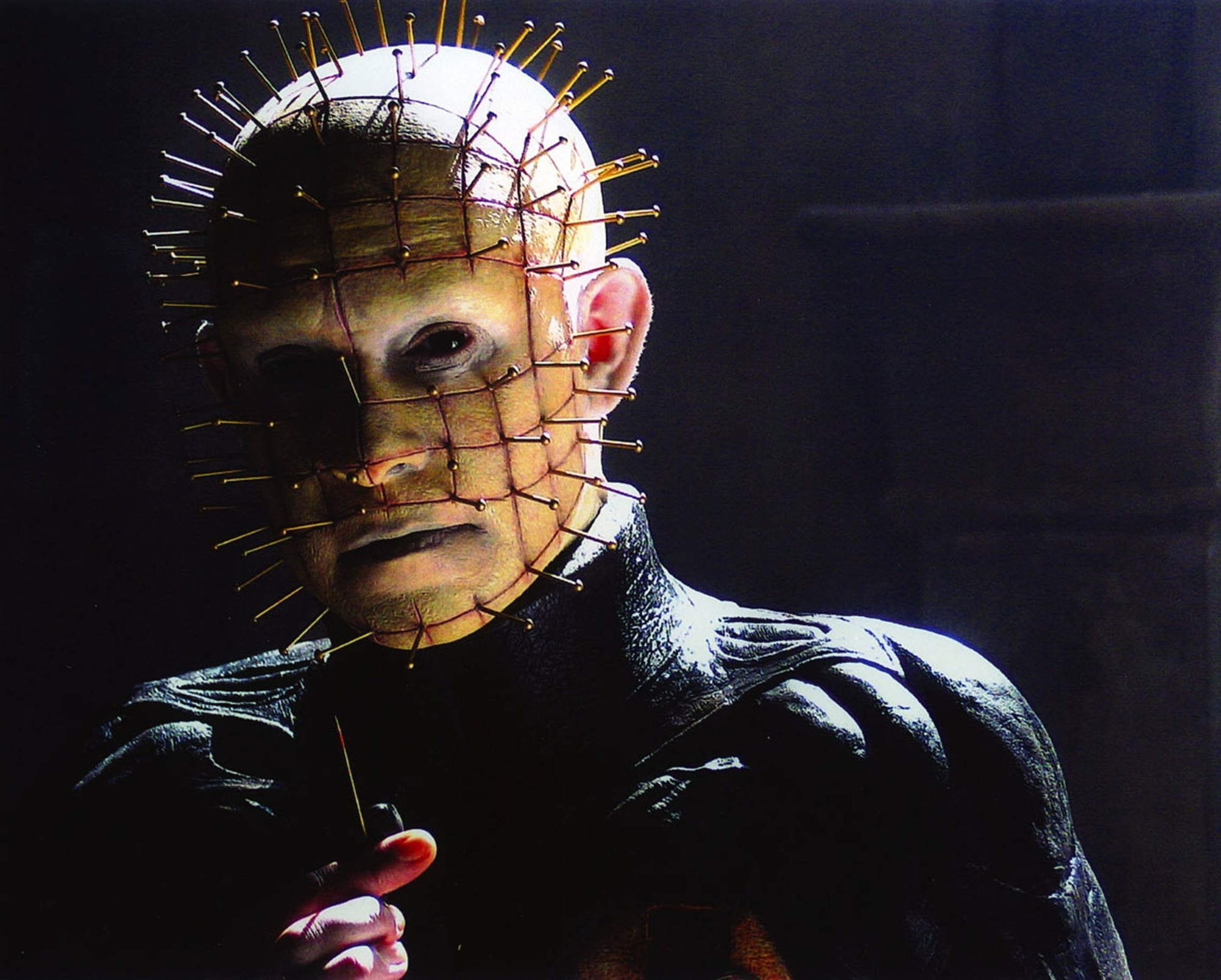 ‘Tis the season for a little hellraisin’. In the midst of the haunting and horrors on which we feast as part of Halloween festivities, let’s celebrate Clive Barker, writer and director of Hellraiser (1987) and co-director with Tony Randel of Hellbound: Hellraiser II (1988). The filmmaker’s genius is creating cinematic horror in the context of actual horrors. In the case of Hellraiser and its sequel, the horrors of the Cotton family are extensions of the same horrors that many witnessed during the dawn of the industrial age, well into the Great War and through to the end of the 20th century. Barker and Randel plunge viewers into a mental and spiritual exercise, one that explores the repercussions of hedonism with a hypnotic and subliminal atmosphere. The reason for their effectiveness lies in the subconscious manner in which Hellraiser’s creators channel the works of Francis Bacon, Walter Sickert, Allen Jones and Zdzisław Beksiński. These impressionist and surrealist craftsmen, like Barker and Randel, expose the horrors of their lifetime to the populace at large.

In both Hellraiser films, Kirsty Cotton (Ashley Lawrence) must escape the clutches of her sadistic Uncle Frank (Sean Chapman/Oliver Smith) and blood-lusting stepmother Julia (Clare Higgins). Meanwhile, the protagonist comes to terms with her deceased father, Larry (Andrew Robinson). On another plane of existence, Kirsty wagers her immortal soul against an immortal deity known as Pinhead (Doug Bradley) and his troupe of cenobites. Thematically and structurally, the Hellraiser series takes on the guise of both Christopher Marlowe’s Doctor Faustus (1604) and William Shakespeare’s Macbeth (1623). But it is the unique artistic look of the first two films (an achievement that was honed perfectly on the first try) that keeps fans wanting more. 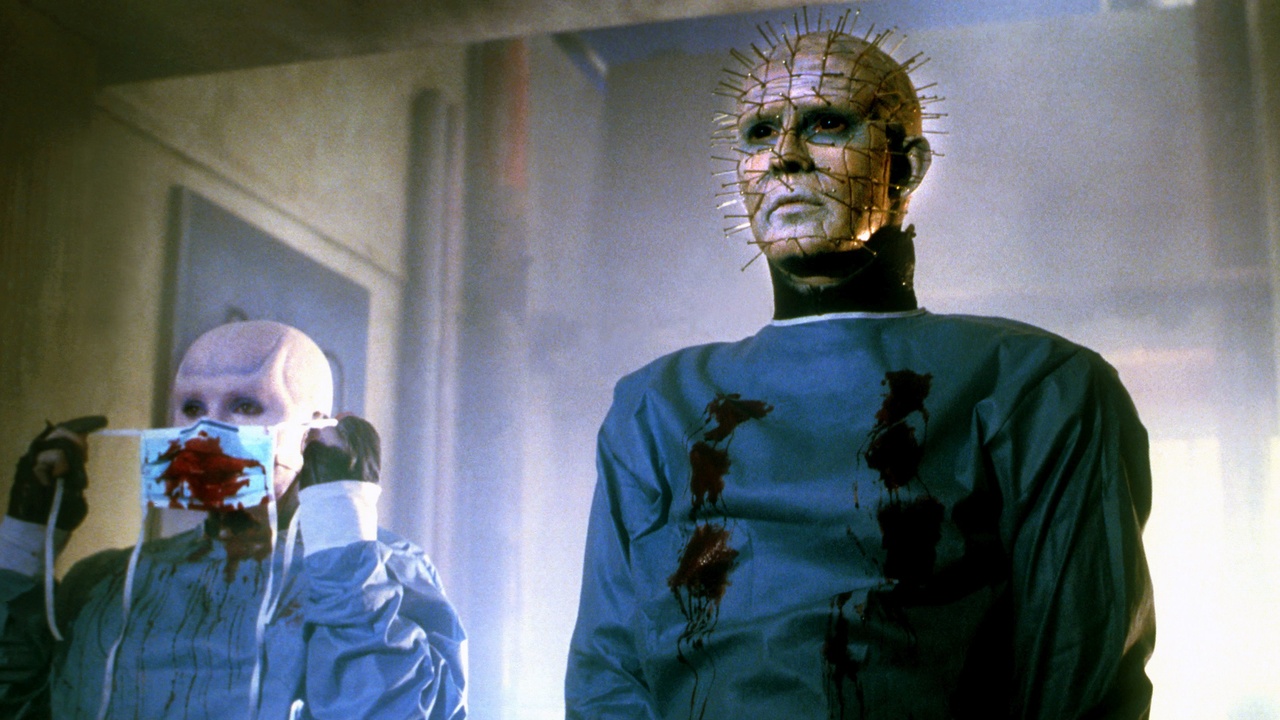 Largely known for his raw, unsettling images, Bacon’s signature style consists of abstract figures of himself and warped human anatomy in the most barbarous fashion. A key trait of his work is the crucifixion. In 1965, Bacon took the image of a dying Jesus Christ and reworked it into a hanging piece of meat torn asunder. Even the unrecognizable animal-looking shape exudes an aura of indifference. In Hellraiser, Barker puts his own spin on this piece. Following Frank’s apathetic delivery of the infamous line “Jesus wept,” the destruction of the character commences. According to Wieland Schmied, author of Francis Bacon: Commitment and Conflict (2006), Bacon once said to colleagues, “When I’m dead, put me in a plastic bag and throw me in the gutter.” This is also the apparent philosophy of Frank upon informing Kirsty that she cannot bring her father back from hell: “Oh, come on, Kirsty. Grow up. When your dead, you’re fucking dead.” The Bacon connections continue with the resemblance of Frank’s demonic form, while dressed in formal business attire, to the subject of the 1961 lithograph Seated Figure. It is worth noting the faint outline of the box structure that surrounds Bacon’s figure. Similarly, boxes represent Frank’s own imprisonment to his hedonistic lifestyle throughout Hellraiser. Julia’s obsession with him and his draining of her blood resembles the 1953 Bacon piece Two Figures. In this Bacon image, a ghoulish figure appears to be sucking the life force out of its lover.

Hellraiser’s nihilism and melancholia mirror the work of the aforementioned Sickert and Beksiński, whose paintings have pre and post-war elements that share thematic ties with the cenobites. Sickert’s post-impressionist characteristics create a feeling of desensitization, which is evident throughout Hellraiser’s exterior landscapes and throughout the Cotton estate. One of Sickert’s works, The Camden Town Murder (1908), shows a half-naked woman lying on a bed as a shadowy figure lies over her. There is a mysterious air about the piece with its alleged connections to the dreaded Jack the Ripper. Similarly, the ghastly remnants of Frank Cotton haunt his brother’s homestead, almost like a ghost story. The literal corpse of Frank looms over the bedside of Julia and Frank’s brother, Larry, as the couple is making love. Frank skins a rat, an act that foreshadows his Jack the Ripper-style murder of his sibling. 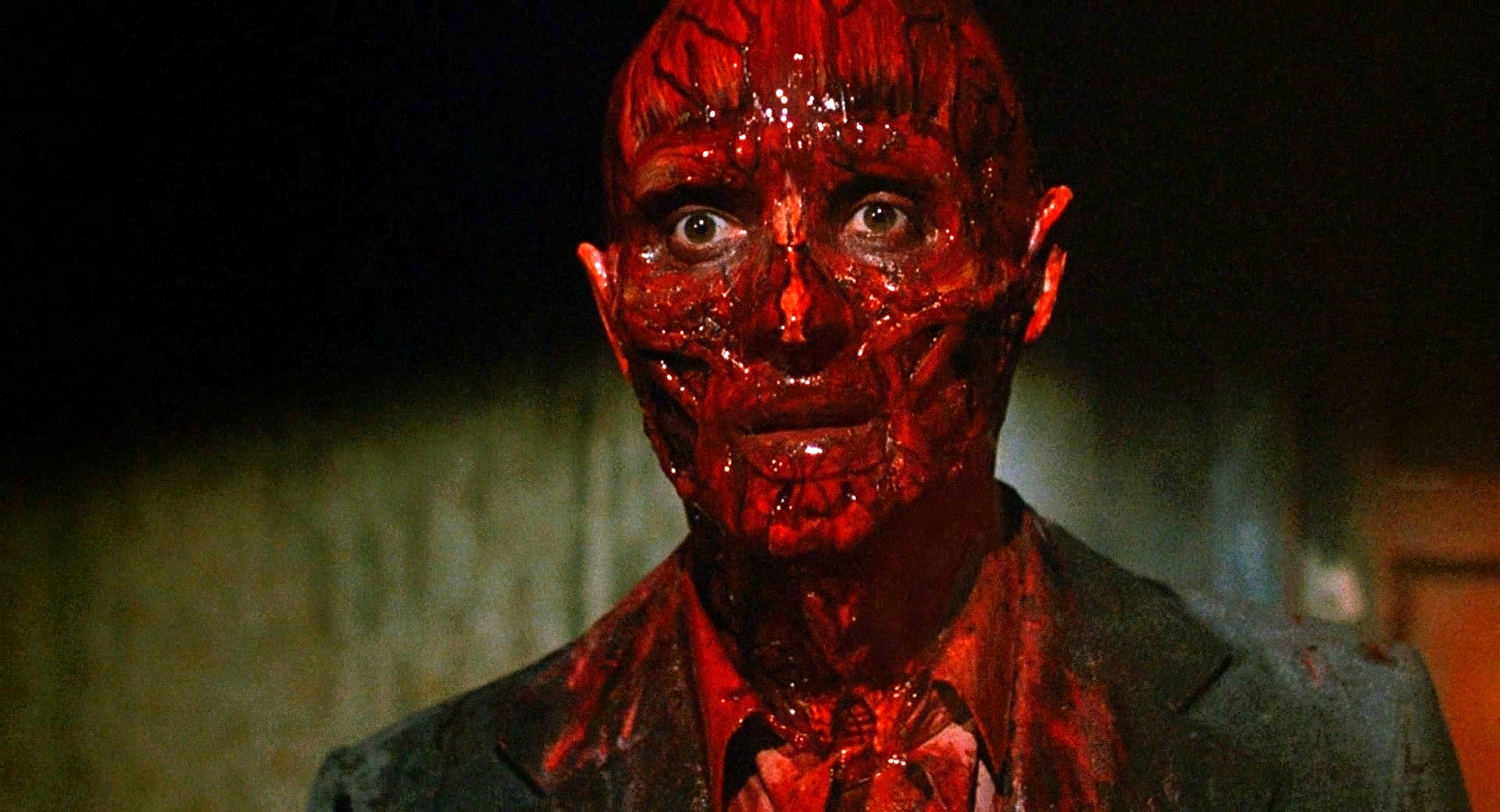 Next, there are connections of Sickert’s artwork with Pinhead aka Elliott Spencer. Service as a captain in The Great War precedes the character’s cenobite transformation. His fall comes in the Battle of Flanders. Left with feelings of deep emptiness and hedonistic urges, Spencer seeks out otherworldly delights and in doing so nullifies any sensations from his body and soul. This discontent towards the horrors of war is the subject of Sickert’s Soldiers of King Albert at the Ready (1914). Soldiers with an emotionless and blank look stare into the void of no man’s land. War has desensitized them. In Sickert’s Minnie Cunningham at the Old Bedford (1892), three old men stare blindly past an exhausted and frail female vocalist. Her pale expression hints at internal suffering. The framing of these men makes them appear as if they’re looking in a mirror, communicating a sense of dislocation and disinterest. In Noctes Ambrosianae (1906), Sickert’s ghoulish onlookers lust after the performers, which is eerily similar to gawkers at public executions. The cenobites in Hellraiser are likewise incapable of achieving pleasure from their sensual desires or the pain they inflict on others. It’s this characteristic that differentiates the cenobites from their 1980s thrill-kill counterparts.

Hellraiser’s Doctor Channard (Kenneth Cranham) connects with the works of Beksiński, a painter and sculptor of surrealist dystopias. His techniques are similar to the same brutalist styles of many post-World War II paintings. Beksińsk’s hometown of Sanok was the site of a Jewish concentration camp, and illusions to the holocaust are evident in his artwork. Beksiński acknowledges this by using the color Prussian blue when shading his deformed human creatures. This color is connected to hydrogen cyanide and other chemicals of genocide. Both in life and death, Channard serves as a haunting reminder of men like Josef Mengele; men incapable of being broken, due to their monstrous nature from the onset. Just as Mengele conducted horrific physical experimentations on the body, so too does Channard break his patients’ minds, seeking a greater truth from their suffering. The gothic labyrinth that Channard and the other cenobites inhabit is tonally and structurally similar to the necropolis architecture found in Beksiński’s paintings. The strongest argument for the concentration camp connections comes when the demons of hell inject Channard with a mysterious blue dye, thus turning his skin pale and white, like a zombie. This is a fitting punishment for him to bear. 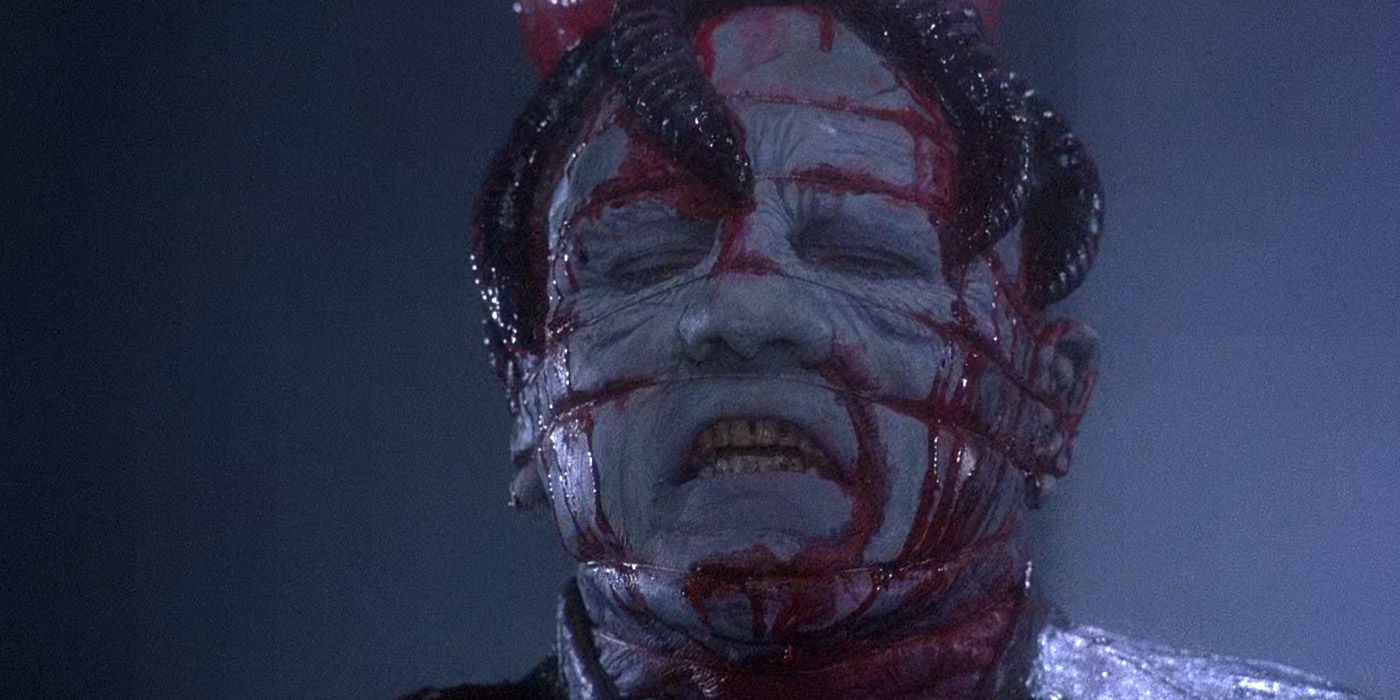 Also at Hellraiser’s artistic core is British pop artist Allen Jones, who is well-known for toying with sexuality and fetishization. The Hellraiser franchise twists these visual aesthetics, giving them a brutalist gothic makeover. In the first film’s opening, Barker builds off this concept in a most chilling and sickening way. Rather than bashing viewers over the head with obscene images of eroticism, Hellraiser starts by assaulting its audience with indecorous visuals. The tempo of the violent actions slows down, almost giving the cenobites’ examination of Frank’s unrecognizable corpse a hint of beguilement. As highlighted in Marco Livingstone’s Allen Jones, Sheer Magic (1979), “Eroticism in Jones’ work is a means of engaging the viewer’s attention before intellectual preconceptions take over.” In the artist’s 1976 piece Leopard Lady, a female hunts for her next victim with a cannibalistic grin and leopard skin in hand. This same level of aggression exists in Hellraiser’s Julia (Clare Higgins). She aggressively dominates her male victims before bludgeoning them to death, leaving them as a “snack” for her beloved Frank.

Hellraiser Essay: Related — Soundtracks of Television: ‘Let the Right One In’

Overall, the Hellraiser franchise is a transfixing art installation, one that is enjoyable for its abstract frights and chills. And for those daring enough to dive into the more cerebral and historical aspects of the gothic nightmares, the added knowledge will give pause for meditation and respect for the worldly horrors that have come before. Hulu’s 2022 release of David Bruckner’s Hellraiser remake sees yet another exploration of art and horror. This time, the world of BDSM fashion combines with the world of body performance art, twisted from the inside out in horrific fashion. In an interview with Collider, Bruckner makes the following statements about the new Hellraiser’s reimagining. “I don’t remember where the initial idea came from. But the notion came from a conversation of what is leather, if not a representation of skin form-fitting that can accent the human body in various ways… and that it had all the personality you might find on a work of art bestowed upon a runway model.” The runway model aspect that Bruckner references carries with it allusions to the daring works of British designer Alexander McQueen, such as the 1995 runway show “Highland Rape.” According to David Kunzle, the author of Fashion & Fetishism (1982, 2004), the purpose of these works is to create a femme fatale — a strong and sexual woman who is hyper-feminine and terrifyingly male. These notions of dominating androgyny can be seen in the hyper-masculine porcelain doll designs of the new Pinhead, portrayed by actress Jamie Clayton. Whether this creates a renewed interest in darker aspects of Victorian fetishism and gothic styles is anyone’s guess. It’s a safe guarantee that the new Hellraiser has many stimulating sights to show YOU.

Hellraiser Essay: Related — That Feeling When You’re Hellbending (and Evolving)