That Feeling When You’re Hellbending (and Evolving) 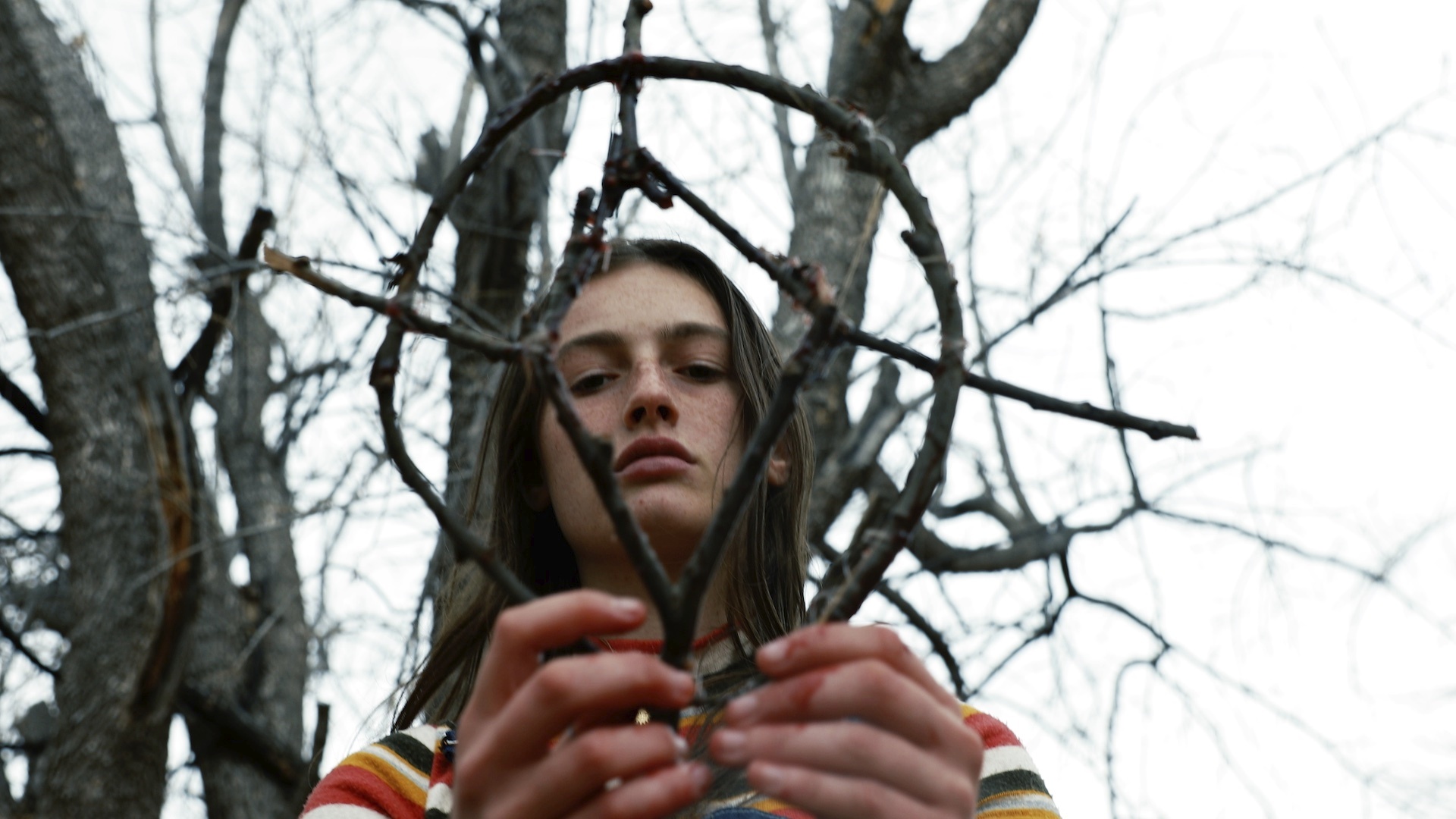 The Adams Family continues to evolve as a DIY filmmaking unit. Hellbender, the four-person crew’s latest release, retains the organic energy of past flicks but looks and sounds like a studio feature. The horror film channels the familial edginess of 2012’s Rumblestrips, the emotional poignancy of 2014’s Knuckle Jack and the genderism of 2016’s Halfway to Zen. Visually, tonally and sonically, however, Hellbender aligns more with 2019’s The Deeper You Dig, a film that — at the time — proved that the Adams Family was the real deal. Now, it’s clear that John Adams and Toby Poser, along with their children Zelda Adams and Lulu Adams, will be relevant figures in the Streaming Wars of the 2020s.

Hellbender takes place in a mountain community. A teenager named Izzy (Zelda) plays in a rock band with her unnamed mother (Toby) but can’t leave home because of a rare illness. When the young protagonist meets a local girl (Lulu as Amber), she attends a pool party and unleashes a primal scream after consuming alcohol and one single earthworm. Izzy, who doesn’t fully understand herself as young woman, learns that her blood-thirsty descendants “grew drunk on fear” and thus became known as “hellbenders”; people with supernatural powers who turned their backs on heaven and bent towards hell. Izzy learns practical life lessons from her mother — such has how to control her hunger and powers — but the girl doesn’t recognize her true potential, at least until she begins investigating the family property. 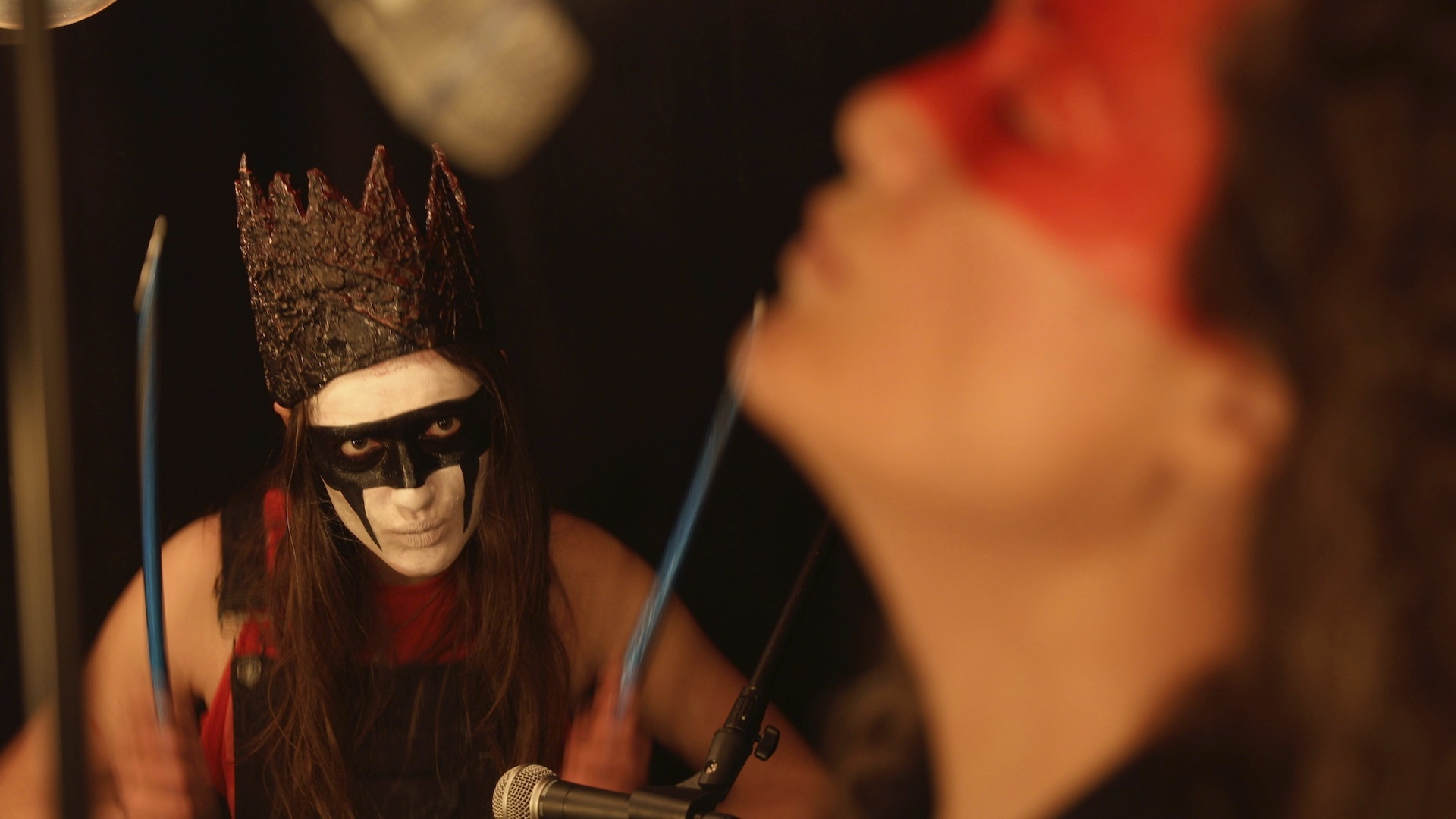 The Adams Family excels at finding truth in dangerous situations. Their feature debut, Rumblestrips, is primarily an easy-going, on-the-road family comedy, yet it builds to a suspenseful moment in which a mother (portrayed by Toby) must fight or flee. Similarly, Knuckle Jack explores mature themes (a morally-questionable man looks after his impressionable niece), while the mostly light-hearted Halfway to Zen features a disturbing sequence in which an ex-con father (John as Nick) protects his 11-year-old daughter (Zelda as Eddie, a girl who identifies as a boy) from a sexual predator. The Deeper You Dig ups the ante, as a mother named Ivy (Toby) tracks down a local man (John as Kurt) who killed her daughter (Zelda as Echo) and hid the body. Hellbender internalizes the external threat concept, as Izzy doesn’t really know anyone aside her from mother, a woman who may not necessarily be evil but may indeed appear that way to a teenage girl whose only goal in life is to have one friend (which she is denied). In past Adams Family productions, Zelda’s characters have had someone to look after her, even in death (The Deeper You Dig). In Hellbender, Izzy must feel her way through life; a narrative premise that allows Zelda to thrive as a performer. Her protagonist doesn’t seek answers in the natural world but rather from within. The latest Adams Family story feels like a natural narrative progression in the unit’s filmography — an inward look; an exploration of the ego in a time of chaos. 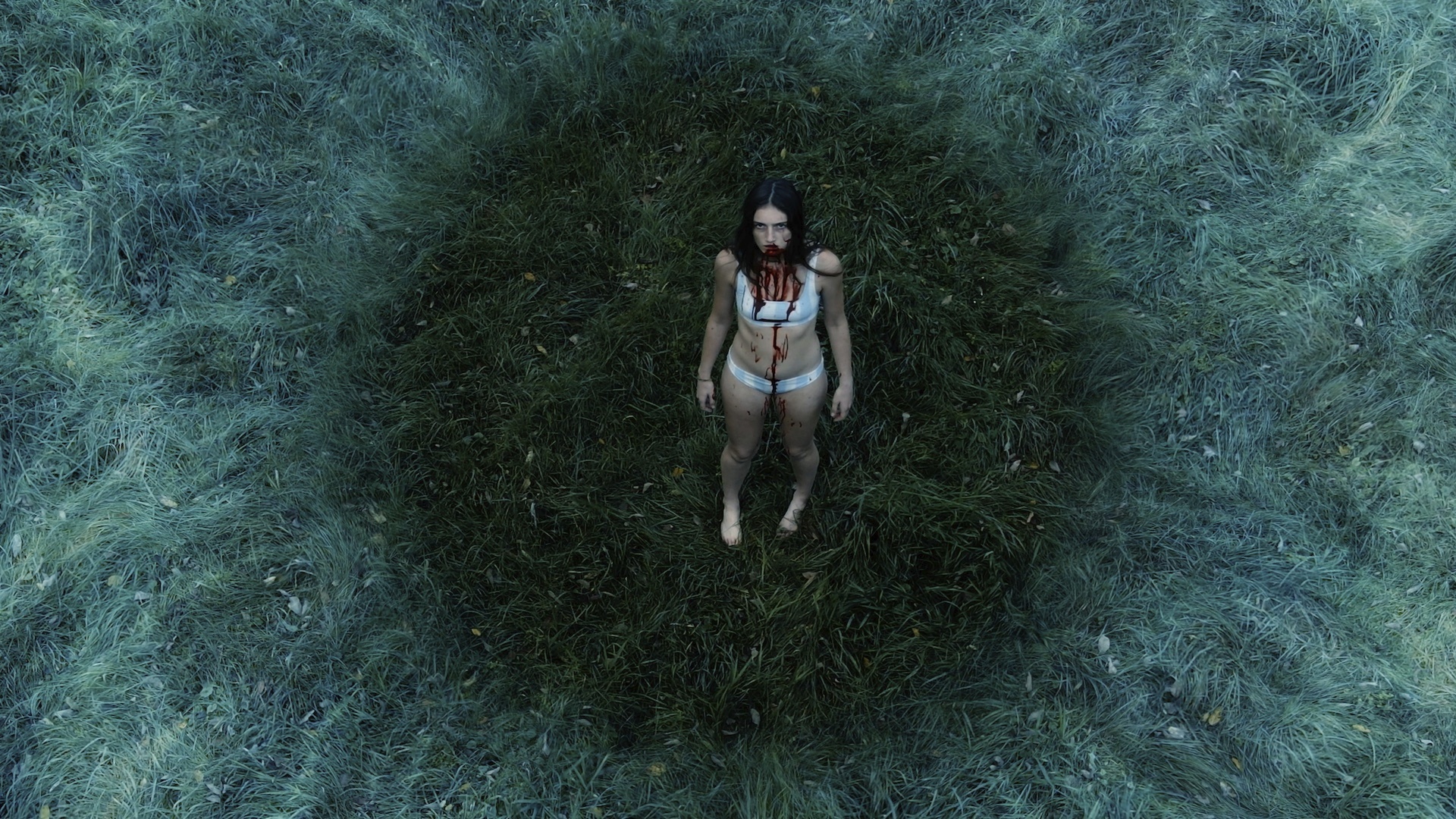 Hellbender includes outstanding drone sequences, courtesy of Zelda, that further establish the Adams Family’s revised filmmaking style. If past indies lack a strong sense of directorial form, The Deeper You Dig and the latest release show a willingness to innovate and improve. In fact, Hellbender and The Deeper You Dig both include striking window imagery, with characters often gazing off into the distance. Both films include staircase sequences that emphasize the psychological space between two individuals. In Hellbender, John and Toby — with Zelda’s directorial assistance — drop the fun-lovin’ montages of the past in favor of surrealistic montages that at once boost the suspense while strengthening the character dynamics. There’s a touch Guillermo del Toro in Hellbender’s bold color palette and a bit of German Expressionism in a fantastic freak-out sequence featuring Zelda and her mother.

After watching each and every Adams Family film, I appreciate the nuances of the collective acting. Everyone brings something different to the table. John, a former model and long-time musician, has leading man looks and always seems to communicate the heart and soul of his characters. The family patriarch appears only briefly in Hellbender but elevates the film with his presence alone. Similarly, Lulu makes the most of her screen time with scathing dialogue deliveries in a minor yet important role.

Toby, an accomplished actress and voice-over artist, has a striking on-screen presence with her big smile and expressive eyes; she reminds me of many California women that I met during the late 2000s and early 2010s while living right off Hollywood Boulevard. Her characters have a distinct point of view, and they will succeed or die trying. But as much I appreciate Toby’s beat poet-style narration in early Adams Family films, it’s refreshing to see her lock into characters who live with a sense of urgency. The Deeper You Dig’s Ivy needs to fix a problem ASAP. The same concept applies for Hellbender’s Mother when she realizes that something is off with Izzy. 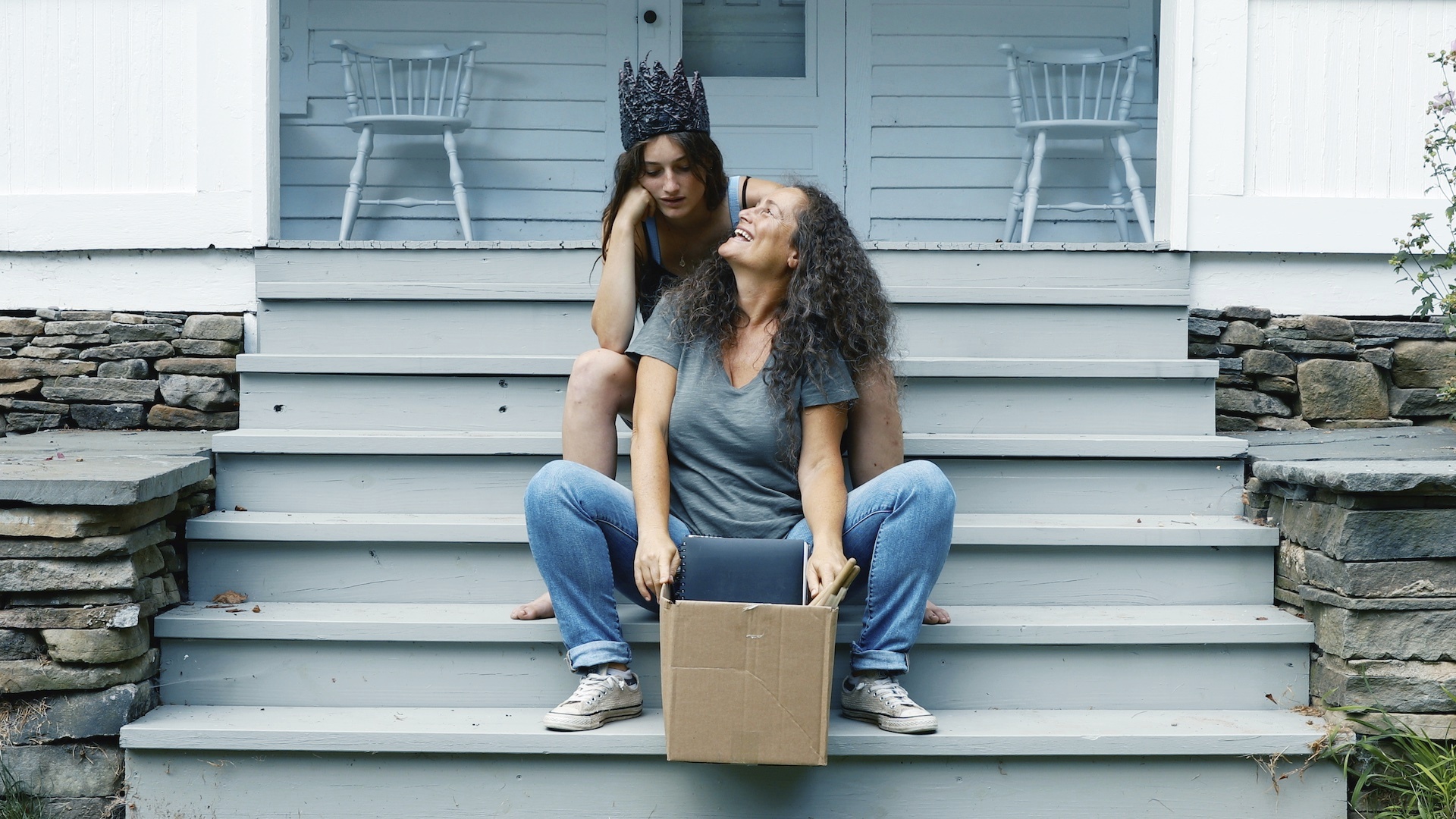 As for Zelda, she seems ready for a big movie career, whether it’s within the horror genre or working in mainstream cinema. Her dialogue delivery stands out in Hellbender, as she speaks naturally during early scenes with Toby’s mother and then slows up her vocal patterns in later sequences. Zelda’s artistry shines through during a climactic moment that will undoubtedly convince viewers that she’s a legitimate star.

The Adams Family evolves with changing times and new life experiences. They are like The Beatles, pre-fame, after playing thousands of shows in Germany. What now? What genre is next? Personally, I hope the New Yorkers make more horror films that can be seen in movie theaters on a Friday night in Fargo. But I trust that the Adams crew will stay true to what they know and feel passionate about. In 10 years, Hellbender will probably be viewed as the hit before THE HIT.