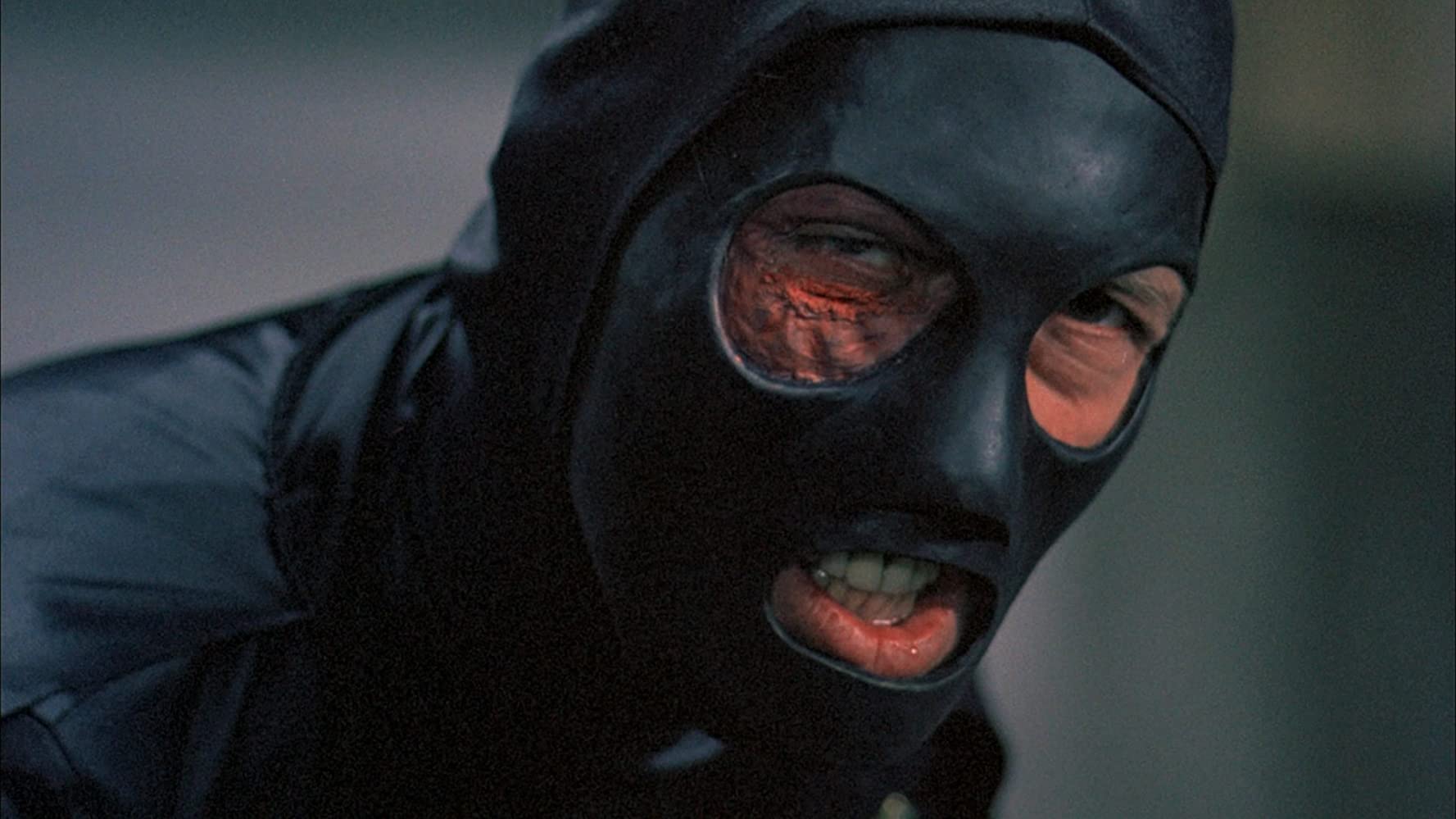 Life in recent months has taken a decidedly dystopian spin. Back in February 2020, amidst the presidential primaries, I saw Donald Trump’s limo do a lap at the Daytona 500. My mind flashed back to the 1975 classic Death Race 2000, produced by Roger Corman and directed by Paul Bartel. Then and now, I find that Death Race 2000’s crazy camp smash-up of a dysfunctional government, rebellion and the absurd suits the surreal times in which we live. In this film, five drivers in a cross-country race display speed and a profound numbness to running over pedestrians: Frankenstein (David Carradine), Machine Gun Joe Viterbo (Sylvester Stallone), Calamity Jane Kelly (Mary Woronov), Matilda the Hun (Roberta Collins) and Ray “Nero the Hero” Lonagan (Martin Kove). The Transcontinental Race is the event of the year, meant to give meaning and entertainment to the lives of every citizen. Interrupting and sabotaging the race are members of the Resistance, an anarchy movement hoping to seize control of the nation from the totalitarian President. Nothing is sacred in the portrayal of religion, politics and relationships as the exaggerated tale unfolds. Charles Griffith wrote the screenplay for Death Race 2000 as an adaptation of Ib Melchior’s 1956 short story The Racer. Upon watching the bizarre national normality of Death Race 2000, I find myself reflecting upon what may be our contemporary national normality at a time when our lives are on pause. For those less drawn to introspection, Death Race 2000 offers mindless fun and an amusing distraction to the concerns of today.

Upon its release, Death Race 2000 met the full spectrum of critical evaluation. In Lawrence Van Gelder’s 1975 review for The New York Times, he describes the film as “an Orwellian vision of the American future, if you believe that Orwell was afflicted with blurred perception and an inclination toward the adolescent in satire.” For this writer, the political satire falls superficially short on the topics of government and rebellion, which is no surprise given the post-Watergate/ Vietnam environment. On the other hand, Film Comment contributor Dave Kehr lauded Death Race 2000 in 1977 as “an expressionist tour de force,” praising the visuals and political themes. In spite of these mixed reviews, Bartel’s film remains a cult classic and has spawned enough prequels, sequels, video games and comic books to claim a niche in the cultural zeitgeist. Death Race 2000 pokes holes in the superficiality/artificiality of national government, rebellion, religion and modern culture at large. Its adolescent faults give the film an engaging edginess. Exuding campy absurdism, Death Race 2000 connects well with the jaded and disillusioned.

More by Peter Bell: Ridley Scott’s ‘Alien: Covenant’: Another Look at the Power of Creation and Destruction 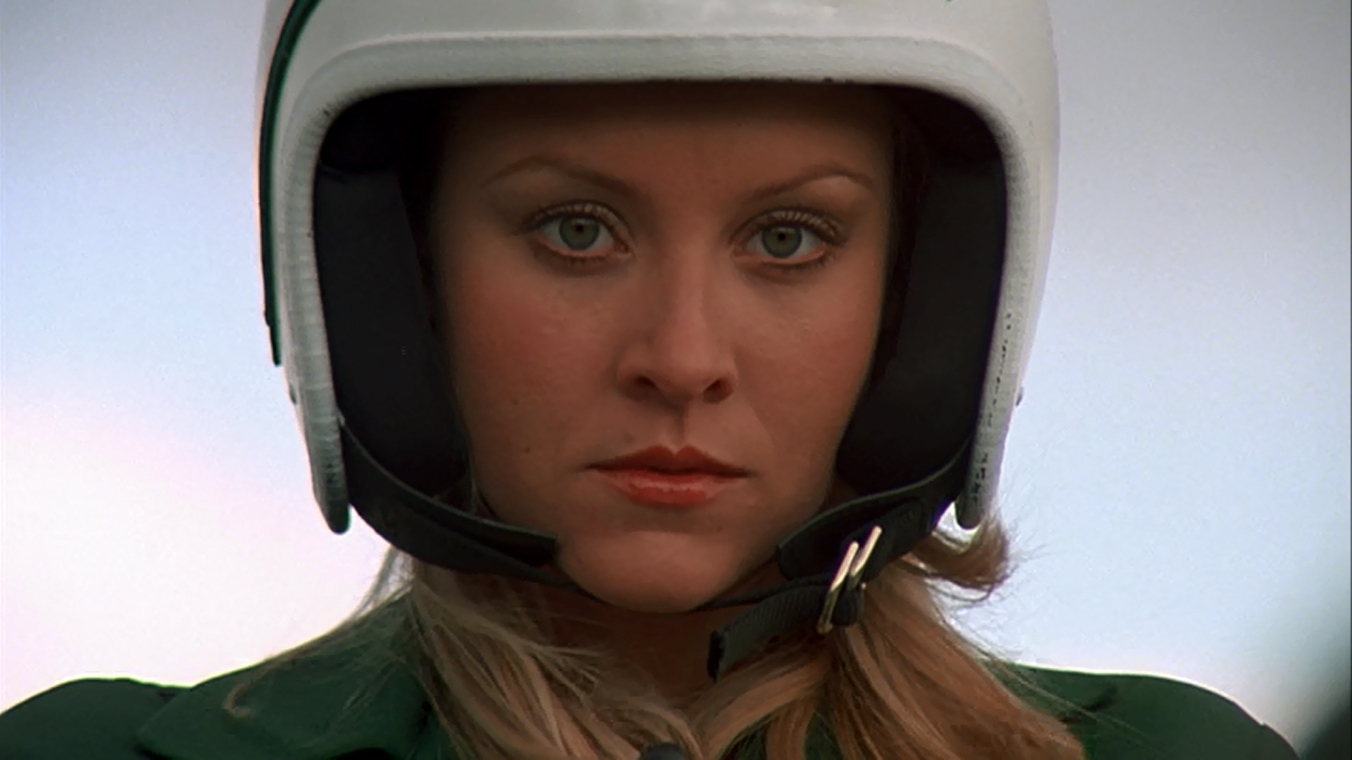 Inherent in the absurdist philosophy of Death Race 2000 is the essential question posed by philosopher Albert Camus: “What is the meaning of existence?” According to Stephen Bronner, Camus believed “The absurd generates an impulse toward self-destruction, and in response it thus becomes necessary to embrace a certain stance towards life.” Both of Death Race 2000’s most prevalent characters exhibit this trait. Frankenstein (David Carradine), the hero of the film, makes it clear at the onset that his life’s purpose is winning. He views the rebellion and the threat on his life as minor annoyances, saying that they add spice to the race. Like a true absurdist hero, Frankenstein takes jabs at religion, even running over the bi-partisan party deacon after that clergyman gives Frankenstein his blessings and declares him immortal. Consistent with Frankenstein’s disregard for religion, Camus claimed that if God exists, He would either have to be an imbecile or a psychopath, concluding that the existence of a Supreme Being would only make existence all the more absurd. Frankenstein reveals that death is his life’s work. His mindset does not change, not even by association with his undercover co-pilot Annie Smith (Simone Griffeth), who is the granddaughter of the leader of the Resistance. Frankenstein tells Annie, “Your mission is a waste of time. The world doesn’t want to be saved — I’m giving you the chance to save one small part of it… yourself.” Frankenstein’s self-destructive fatalism becomes fully apparent when he reveals he has literally attached a “hand” grenade bomb to his prosthetic limb as he intends to be the end of the line of the masked men who have played the role of Frankenstein.

Machine Gun Joe’s motivation is hate, another element which correlates to our nation’s current normality. When asked by Mira what compels him to win he responds, “In the name of hate, one big victory for hate.” The irony here is that despite his bombastic talk, Joe seems to be an intelligent guy. He clearly sees through the government’s façade of making Frankenstein a demi-god. Joe calls “bullshit” on scapegoating the French as the enemy when it’s obvious the rebels of the Resistance are to blame for disruption of the race. Given his hatred of authority figures, one could almost see Joe joining the rebellion. Despite his clarity of the government’s motives, Joe covets the fame and devotion Frankenstein receives. His envy of Frankenstein blinds him as he allows other racers to pass him while he sulks. Joe should realize that his is a Sisyphean role. He refuses to let go of the race, hoping he’ll succeed at replacing Frankenstein as the fan favorite, but the powers above ordain him to be a mere foil to Frankenstein. Neither the race nor the nation can give him what he truly seeks. 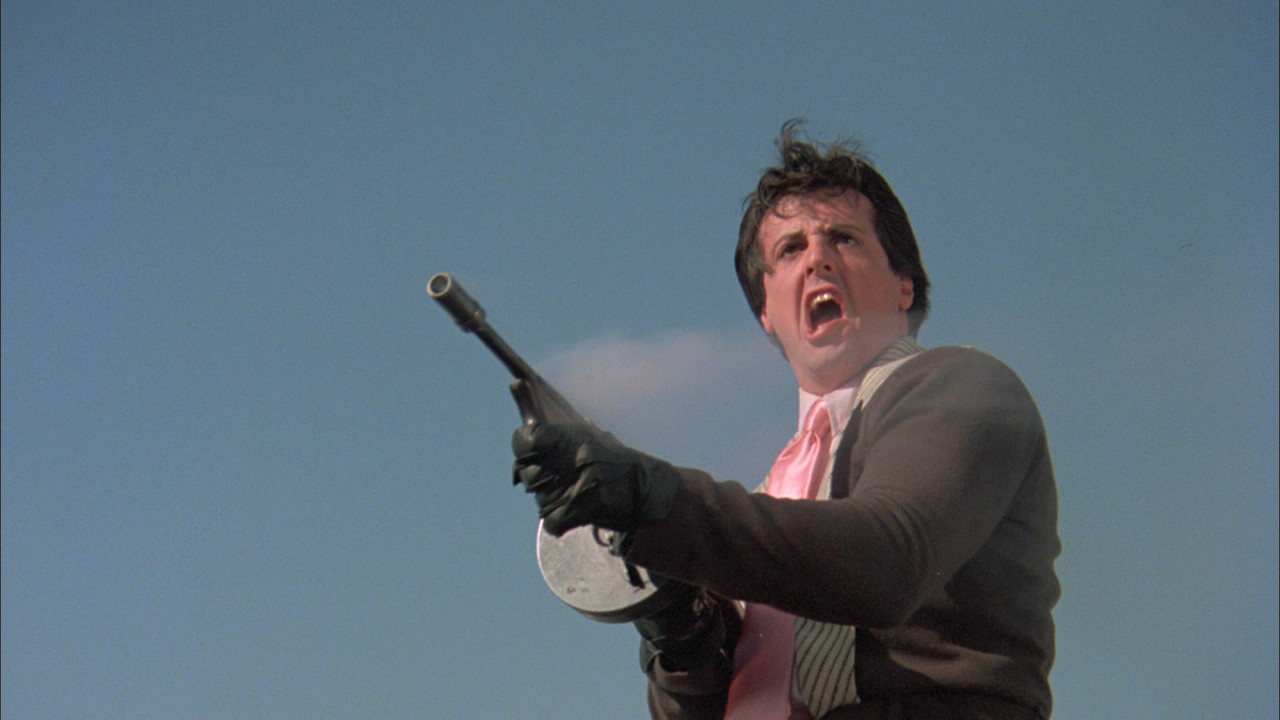 The glue that holds Death Race 2000 together is its camp style. In Susan Sontag’s 1965 essay Notes on Camp, she enumerates 58 characteristics that define camp. Death Race 2000 checks a lot of the boxes on her list. According to Sontag, camp “contain(s) a large element of artifice… (It) is a vision of the world in terms of style, but a particular kind of style. It is the love of the exaggerated, the ‘off’ of things being what they are not…It sees everything in quotation marks.” All of these elements are front and center in Death Race 2000. Much credit for the camp style of this film goes to Jane Ruhm, the costume designer. Several characters appear in comic book caricature attire: a Nazi, a gladiator and a gun fighter. Frankenstein’s black bondage wardrobe makes him a dead ringer for the Italian villain Diabolik (Danger Diabolik, 1968), while his dead pan mannerisms evoke Adam West’s Batman. Sontag cites comic books as sterling examples of camp. David Kehr’s Film Comment review points out Death Race 2000’s “bright comic book style.” A knock-on effect of this comic book aura is the exaggerated, pan mime style in which the actors use their physicality to boastfully express themselves. It calls to mind the Delsarte aesthetics seen in Fritz Lang’s Metropolis (1927) and many other silent films. Actors would punctuate their emotions through heavy-handed arm and hand gestures while interstitial cards handle the bold exposition. Talkies largely swept away this style, except for the remnants which remain in science fiction and horror.

Glorification of character is another hallmark of camp which abounds in Death Race 2000. Sontag explains that “character is understood as a state of continual incandescence — a person being one, very intense thing.” This is certainly true for the aforementioned main characters of Death Race 2000, but it extends to minor ones as well. Famous radio DJ host Don Steele strikes comic book pose, as one would expect from Frank Gorshin aka The Riddler from the Batman TV series, and spouts dialogue including “A beautiful kill! A clean kill!” Similarly, intensity strikes the viewer when director Bartel — in his cameo as the “mad” reconstructive surgeon — proclaims “There is no cause for alarm! The patient has been flown in from abroad and is in a state of suspended animation.” True to camp style, there are no real character arcs in Death Race 2000. Each “burn” a single brilliant color. 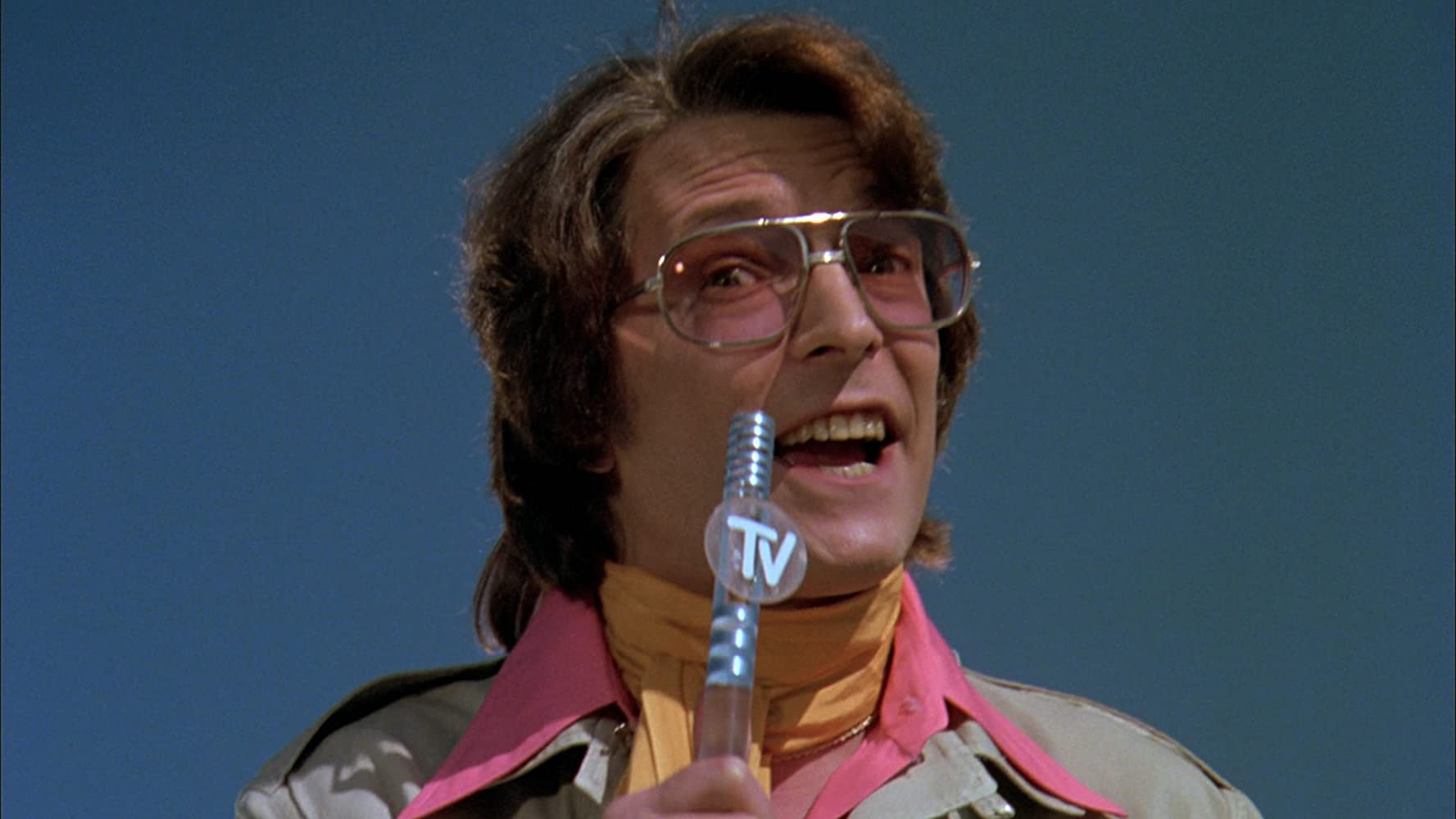 Another prevailing aspect of camp, as Sontag reveals, is its capacity to “dethrone the serious.” The entire premise of Death Race 2000 earns a big checkmark here. At a lower level, this trait also diffuses tension for certain situations, such as when Annie removes Frankenstein’s mask. Annie and the viewing audience anticipate a Lon Chaney Phantom of the Opera (1925) moment. Instead, the ruggedly handsome Carradine appears, accompanied by a sappy romantic soundtrack, as he states, “what were you expecting… a pretty face?” Similarly, after Annie is nearly killed by Machine Gun Joe, the scene rapidly devolves into a Joe vs. Frankenstein fight scene that looks like it was stolen from a Batman episode. Even the cinematography of this segment is reminiscent of 60s television.

Part of the reason that Death Race 2000 has such a strong camp style stems from a happy coincidence. Bartel and Corman were engaged in a constant tug-of-war over the film’s tone from beginning to end. Bartel insisted on the re-write of Robert Thom’s original script by Griffith before he would even agree to direct. Griffith added humor and a human touch. According to film scholar Stephen Armstrong, “Bartel tried… in an effort to soften the narrative’s violence with satire… to make the film’s characters and their approaches to killing pedestrians at once absurd and funny.” As Armstrong wrote, Bartel revealed “The premise of the movie was so grim that the only way I could deal with it was to exaggerate it outrageously, artificialize it and not take it seriously.” Corman, meanwhile, watched the dailies and demanded a re-shoot of any scene that he found too farcical. The end result of this struggle between director and producer is a product that perfectly fulfills Sontag’s parameter that “Camp is art that proposes itself seriously, but cannot be taken altogether seriously because it is too much.” 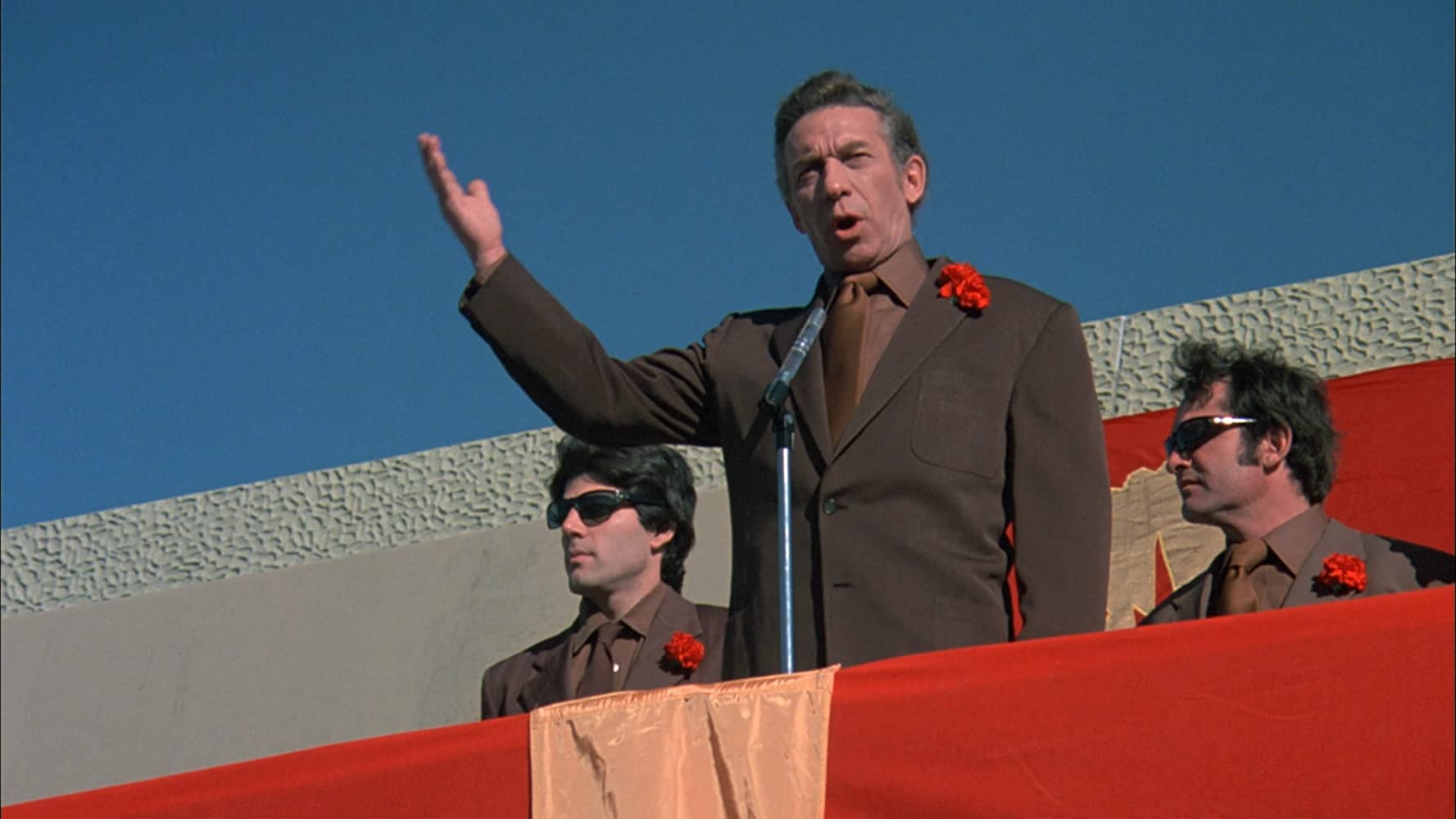 American fashion, fine arts and high society embraced camp at the 2019 Metropolitan Museum of the Arts Met Gala with its theme “Camp: Notes on Fashion.” In a May 2019 article for The New York Times, Bonnie Wertheim comments that the Met Gala’s 2019 theme had society wondering about treasured things. That same article includes a quote from Andrew Bolton, curator of the Met’s Costume Institute, as he explains “Camp can actually be a very sophisticated and powerful political tool, especially for those living in marginalized times.” Fast forward to 2020 when many of us are re-evaluating what we treasure, as access to many of our formerly treasured activities, services and material obsessions are not within our reach. We are living through a crisis in which the most vulnerable are the marginalized. We have several camp characters in government who exhibit over the top behaviors and make exaggerated statements. Many at the highest and lowest levels of society weigh life versus money when making decisions. Perhaps the exaggerated disregard for human life in the name of national pride, entertainment and prosperity in Death Race 2000 is a timely trigger for reassessing priorities as we await a return to normalcy.