Conceptions of identity and security are so often tied to a sense of place, of belonging to a community, a group or a township. We fear the erasure of these things and the subsequent erasure of the self — an act historically tied to great colonising forces like Genghis Khan or the British Empire, but as prevalent today in an increasingly globalised world dominated by Western capitalist agendas and interests. The citizens of Bacurau find themselves very tangibly at the receiving end of this insurmountable threat when their backwater town is literally removed from the map following the death of its matriarch. As a troupe of wealthy European and American game hunters moves in to pick off the residents one by one, directors Kleber Mendonça Filho and Juliano Dornelles call upon a wide-ranging cinematic vocabulary to manifest a furiously entertaining rail against the systems, institutions and individuals working to oppress, exploit and erase vulnerable civilisations around the world today.

Mendonça presents his new feature, a Jury Prize winner at the 2019 Cannes festival, as the latest entry to a filmography defined by its preoccupation with ways of life under threat. His previous film, Aquarius, dealt with the impending demolition of a long-standing apartment block in the city of Recife and one woman refusing to give up her lifelong home within. Where this 2016 offering communicated its ideas through feminine melancholy and ageing anxiety, sharing formal DNA with Claire Denis’ Let the Sunshine In (2017), Bacurau can rather trace its aesthetic heritage from films like Predator (1987) or First Blood (1982) through to, say, the Expendables franchise (2010-14). However, it rebukes the nationalistic jingoism of such American action fare to put forward a leftist, socially-conscious manifesto for a progressive Latin American politics. 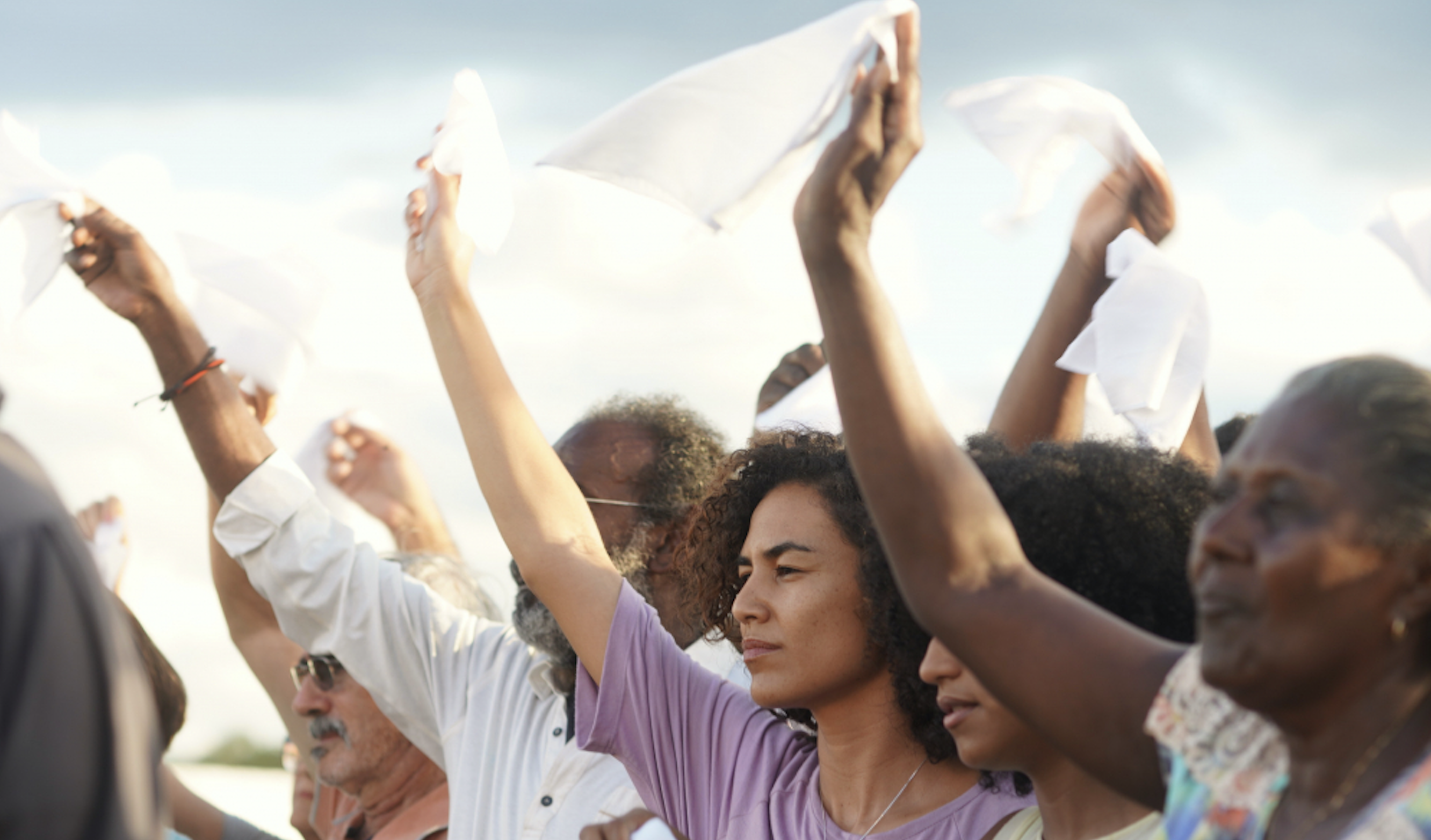 By bringing on Aquarius production designer Dornelles as Bacurau’s co-director, Mendonça refocuses on look and feel to great effect. The opening stretch of the film realises Bacurau as a palpable, tactile place — fully mapped out both geographically and demographically with neatly-established landmarks and social dynamics. It’s clear from the outset that the town is especially vulnerable. Bárbara Colen’s Teresa serves as the audience’s eyes, returning home after many years for the funeral of her 94-year-old grandmother who had long been looked to as the town’s unofficial figurehead. Age-old feuds and simmering tensions between locals come to the fore, while populist political upstart Tony Jr. (Thardelly Lima) moves in from the city to manipulate votes out of an embittered community desperate for resources and support. A leisurely, extended tour through this place exposes a people on the back foot, easily baffled by the arrival of two mysterious motorcyclists with pale skin and heavily-accented Portuguese who prod and test the uneasy equilibrium. The revelation that these mysterious riders are in fact in the employ of the nefarious Michael (B-movie giant Udo Kier, gorging on scenery) and his band of trigger-happy Westerners sees the movie shift gears without properly applying the clutch. It’s a sudden jolt from languorous, allegorical place-setting into gleeful, schlocky ultraviolence, deliriously effective in its lack of subtlety to wake up any dozers in the back row.

As Bacurau ramps up, it moves ahead with both its genre heritage and political agenda proudly on display, and the appeal of the film comes from how the two cohere rather than compete. Michael and the game hunters are introduced as a group of intoxicatingly odious caricatures unabashedly devised with the Trumps, Bezoses, Zuckerbergs and Musks of the world in mind. Bristling with grim personality, this bloodthirsty pack of super-rich day-trippers articulate the vulgarity and rot at the heart of neoliberal entitlement, not least in the ease with which they reduce their prey — the men, women and children of Bacurau — to animalistic traits and numerical values in their sick game of cat and mouse. Their assault on the town is built from the same formal components as an American shoot-em-up, but twisted out of shape by reorienting viewer sympathies with the recipients, rather than the perpetrators, of these gung-ho acts of militaristic derring do. 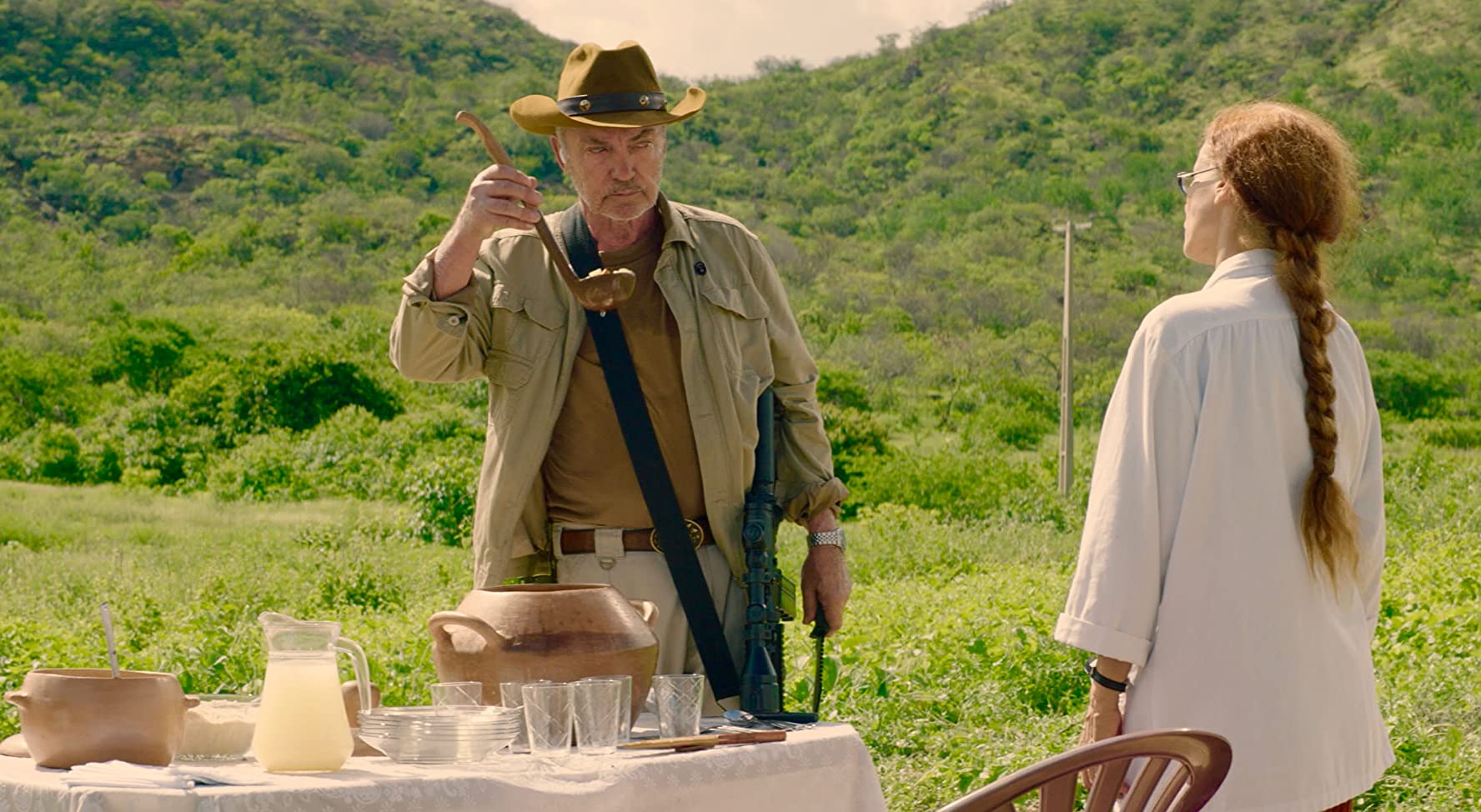 Mendonça and Dornelles use the push-back of the townspeople against this imperialist onslaught (writ specific in Bacurau and writ large in countries like Brazil in the present day) as a rejection of Western-centric narratives, drawing up for themselves a utopian vision of community outside the dominant framework. Bacurau itself, though run down and underserved thanks to the ignorance of the powers that be, comes together as an idealised, progressive collective — accepting of all stripes, as exemplified in the heroism and gender fluidity of its outlaw defender Lunga (Silvero Pereira) — to resist the invaders intent on wiping their home out of existence. Colonialist intent is not only forcefully resisted by Bacurau’s citizenship, but also joyfully disregarded, as when Sônia Braga’s guru doctor Domingas dismisses a song by British new wave titans Spandau Ballet as “American music.”  Braga herself — another Aquarius import, having led that film with a graceful, understated turn completely alien to her weather-beaten, snarling work in Bacurau — is positioned diametrically opposed to Kier’s Michael, an unapologetically Latin figurehead with little interest in compromise or peacemaking to placate her people’s supposed oppressors.

Relishing in its ability to wrong foot and thrill right to its final moments, Bacurau is an unashamedly cinematic experience, with its makers playing in a sandbox of tropes and expectations, subverting them to put forward a radical and wholly essential message. A call to arms for the oppressed and a shot across the bow to oppressors — whether conscious, unconscious, complicit or otherwise — its ability to challenge and entertain makes for an experience impossible to ignore and a lesson impossible to forget.