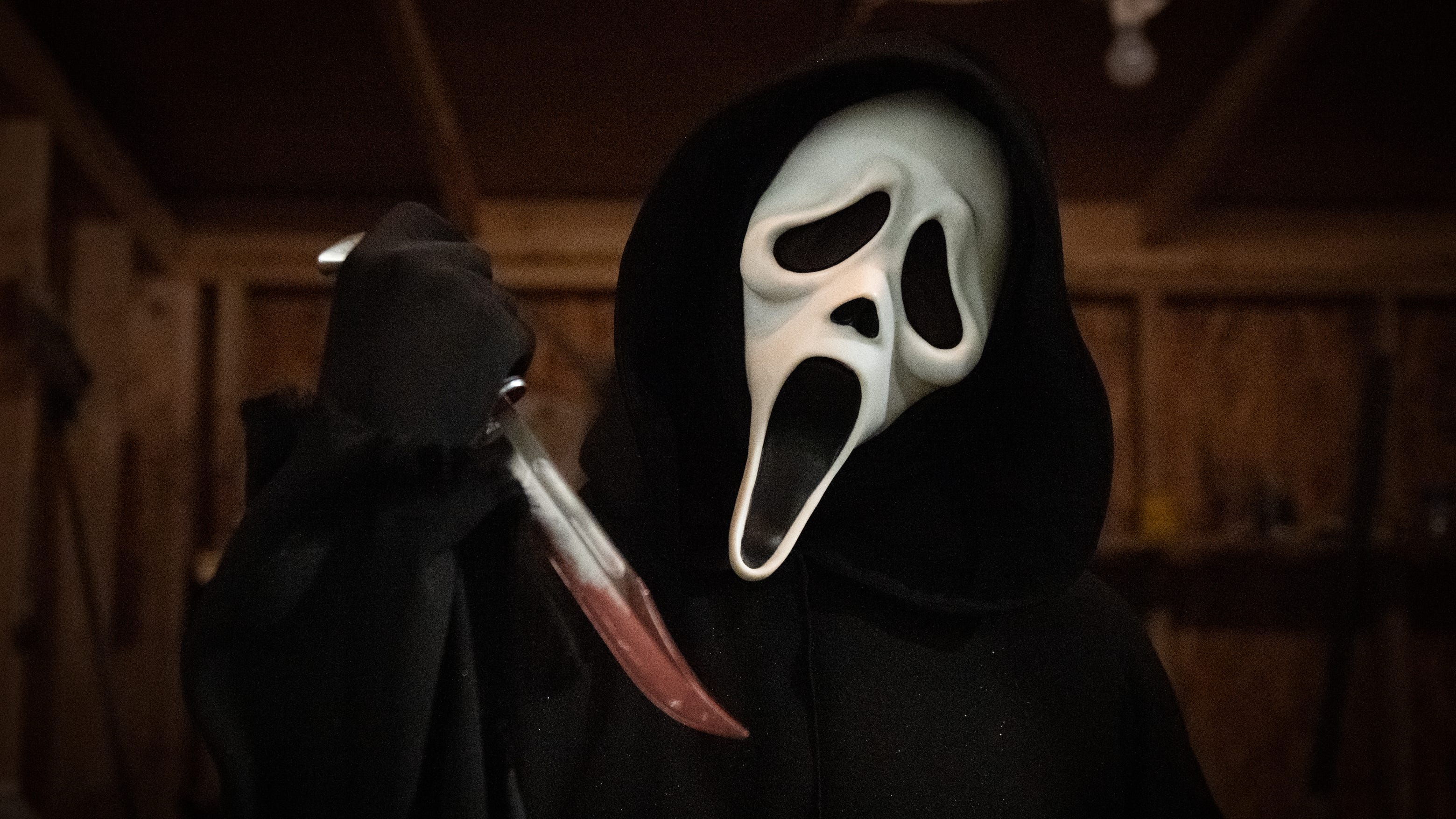 Pity the man — or in this case, men — tasked with attempting to continue maestro Wes Craven’s Scream legacy. The late filmmaker’s meta slasher franchise is among the most beloved of the horror genre, with its least-liked installment, Scream 3, still standing head and shoulders above most comparative sequels. Put simply, if Scream 3 were released as an unrelated movie, it would’ve been well received. Taken as is, it’s a lesser version of Scream precisely because the quality of the franchise is so incredibly high overall. For many fans, Scream 4, released in 2011, was a welcome return to form, as well as a fitting capper to the series (the fact that it ended up being Craven’s final film also felt sweetly apt). But, given we’re in the midst of a classic horror resurgence, with the likes of Halloween and Candyman gifted reboot/sequels in recent years, it’s only fair that Scream gets resurrected too — confusingly, with the same title as the original 1996 film. For all intents and purposes though, this is assuredly Scream 5.

If anybody was going to carry the torch for this untouchable series, the guys behind the terrific, modern horror hit Ready or Not seem like a safe bet. It also helps that co-directors Matt Bettinelli-Olpin and Tyler Gillett, of cult filmmaking collective Radio Silence, are on record as lifelong Scream fans. Tackling the script, meanwhile, are Zodiac scribe James Vanderbilt and Ready or Not co-writer Guy Busick. All the pieces were in place to deliver a great Scream sequel, or “requel” as the film itself terms it, but without Craven or, arguably even more importantly, original screenwriter Kevin Williamson, is the film ever going to feel as special as it once did? Is it even really Scream? The good news is that, to their great credit, Bettinelli-Olpin and Gillett manage to deftly balance old school homages and brand-new thrills, spills and kills without it ever feeling like they’re being too deferential to either. There are some missteps along the way, with one particular character choice making less sense the longer it goes on, and a reference to fellow requel Black Christmas (2019) feeling meanspirited and, worse, ignorant, but for the most part the big swings taken by this talented new team pay off. 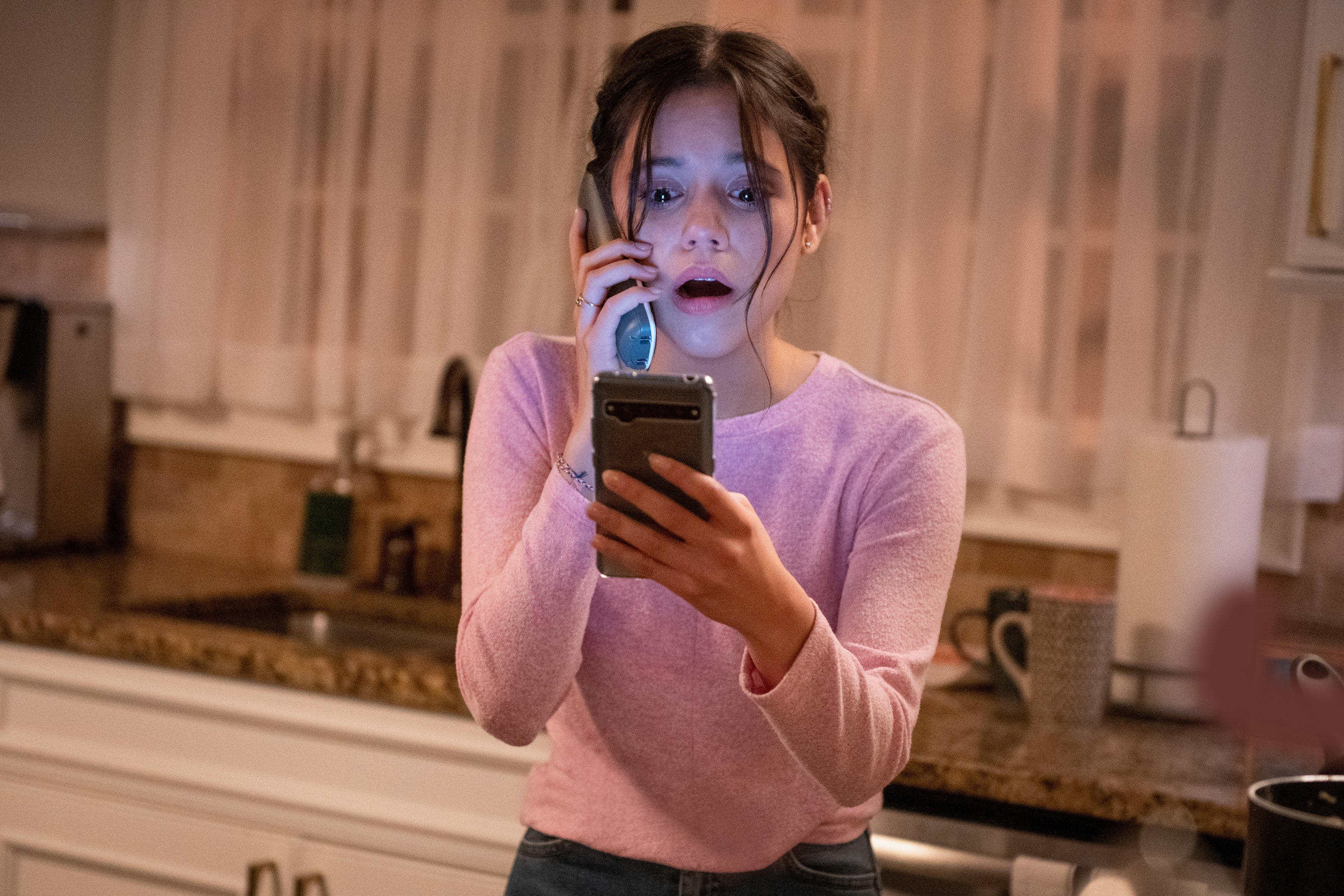 Although the original Scream trio is back to fight Ghostface once more —  Neve Campbell as Sidney Prescott, Courteney Cox as Gale Weathers, David Arquette as Riley Dewey — there’s a whole cast of charmingly diverse newcomers that complement the return of Scream 4 fan favorite Judy Hicks (Marley Shelton). The ostensible Final Girl is troubled transplant Sam (Melissa Barrera), whose younger sister, Tara (Jenna Ortega), is attacked in the film’s thrilling opening moments, which are glimpsed in the trailer but boast considerably more dark delights in the finished product. Sam rocks up to Woodsboro alongside dedicated but cautious boyfriend Richie (Jack Quaid), who understandably questions the logic of willingly traveling to this murder town, and right into the path of danger. Sam’s crew, meanwhile, is comprised of BFF Amber (Mikey Madison), sensitive Wes (Dylan Minnette,  whose character name is dedicated to Craven), lost soul Liv (Sonia Ammar) and plucky brother-sister duo Mindy (Jasmine Savoy-Brown) and Chad (Mason Gooding).

Elsewhere, Kyle Gallner’s oily Vince lurks on the sidelines as a creepy older guy and obvious suspect. This group of erudite and undeniably good-looking young people is movie-literate and tech-savvy, making each of them reasonable guesses for Ghostface, too. They know the rules and even playfully break them down, much like in the original Scream movies, but their smarts won’t save them no matter how fast they Google for information. It’s tough to capture the brilliance of Williamson’s whip-smart and utterly ahead-of-its-time writing, so Vanderbilt and Busick wisely opt not to emulate him. Instead, they craft their own clever jokes, nods and references that feel equally fitting for a Scream movie and a modern horror released in 2022. The Babadook gets a shout-out, as an example of much-maligned “elevated horror,” while sequels that ignore the beloved legacy of their source material or, worse yet, honor fans’ wishes above all else, are ruthlessly demolished. One of the strongest elements of this new Scream, in fact, is a cutting and brilliantly incisive through-line about snide, entitled, self-described film buffs, who believe they know best but clearly deserve nothing but derision and scorn. 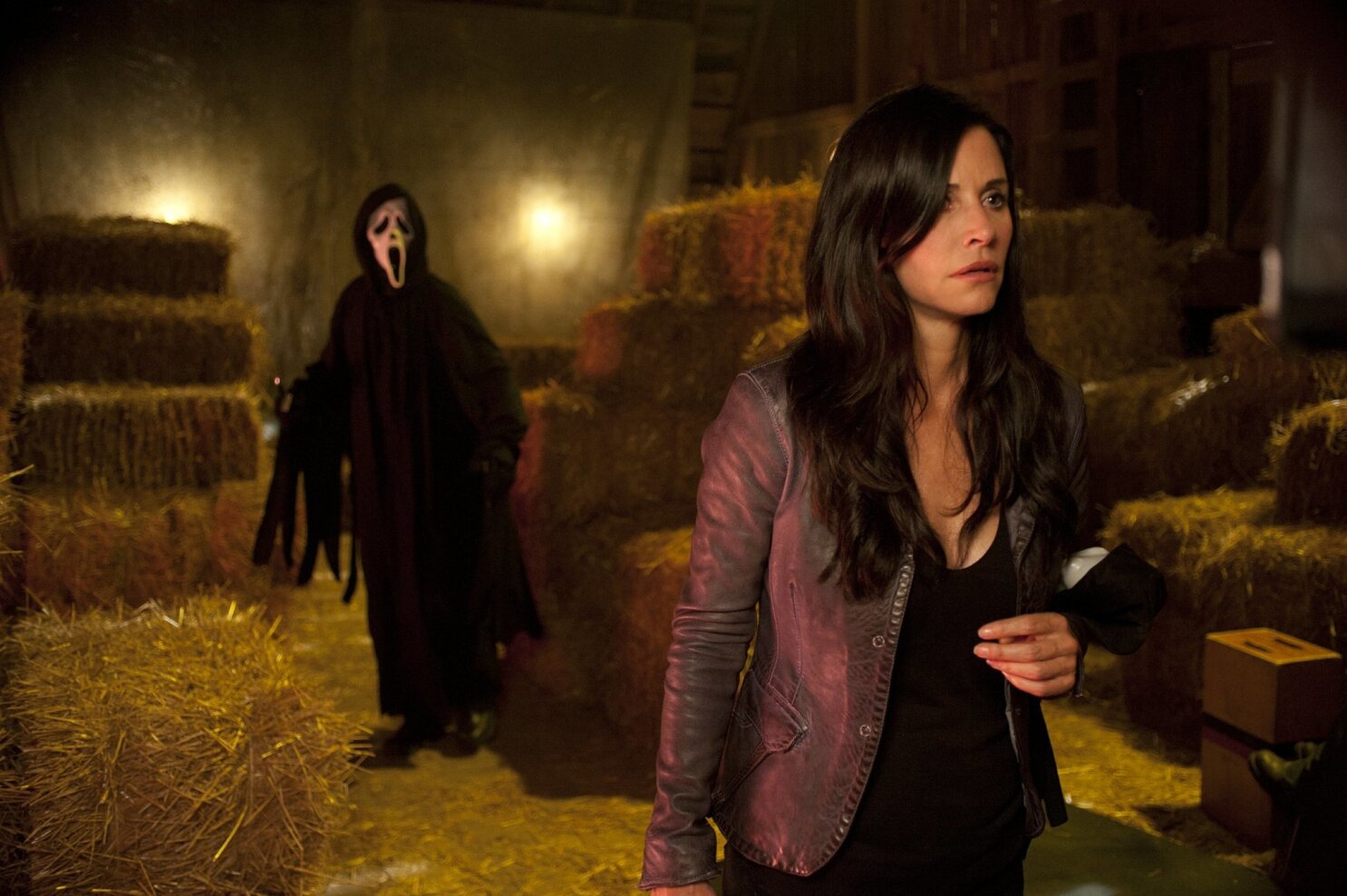 Much like Halloween (2018), the focus is evenly split between the returning series stalwarts and the various newcomers. Impressively, Sidney herself doesn’t return to Woodsboro for a good chunk of Scream, allowing the younger cast members the space to make their mark. Their personalities are thinly sketched, but this was true of the original series too. Although Scream didn’t make audiences cheer for characters’ deaths in the same way that Friday the 13th did, for instance, the only people viewers really got to know was the core cast. Thankfully, this means any of the newcomers could be the killer and, equally, any of them could be next. Although eagle-eyed Scream fans will spot certain clues along the way, the movie continues the franchise’s well-established legacy as a riveting whodunnit. Even when it’s clear that the final act has arrived (because someone points it out, natch), there are more surprises to come. Considering everything the filmmakers must contend with, from previous entries to fan expectations, it’s impressive that Scream is as unpredictable and exciting as it is. This is also among the goriest and most violent entries. And just because someone is stabbed doesn’t mean they’re dead, which is an interesting wrinkle to the narrative that further destabilizes the audience. Scream also feels like a fitting final chapter, rather than the start of something new.

One of the major hallmarks of the Scream franchise is its ability to adroitly balance scares and laughs, and thankfully this fifth installment is loaded with plenty of both, never to the detriment of either. There are instantly quotable lines and references, while Ghostface is given more phone-time than ever before, with the incomparable Roger L. Jackson proving once again why he’s the O.G.

Woodsboro itself is fleshed out in a similar manner to Haddonfield in Halloween Kills, with a hospital-set sequence paying homage to Scream 4, while the return of a key location from the original film, though rightfully marked out as slightly derivative by one of the original leads, makes sense for a film looking to finish things off on a familiar note, rather than rewrite history. And, if this Scream never reaches the heights of the original film of the same name, it’s hardly the fault of the people behind it, who have clearly done their utmost to craft a story in Craven’s mold (and indeed, in his honor, per a dedication) that also feels refreshing and different for fans craving something new. 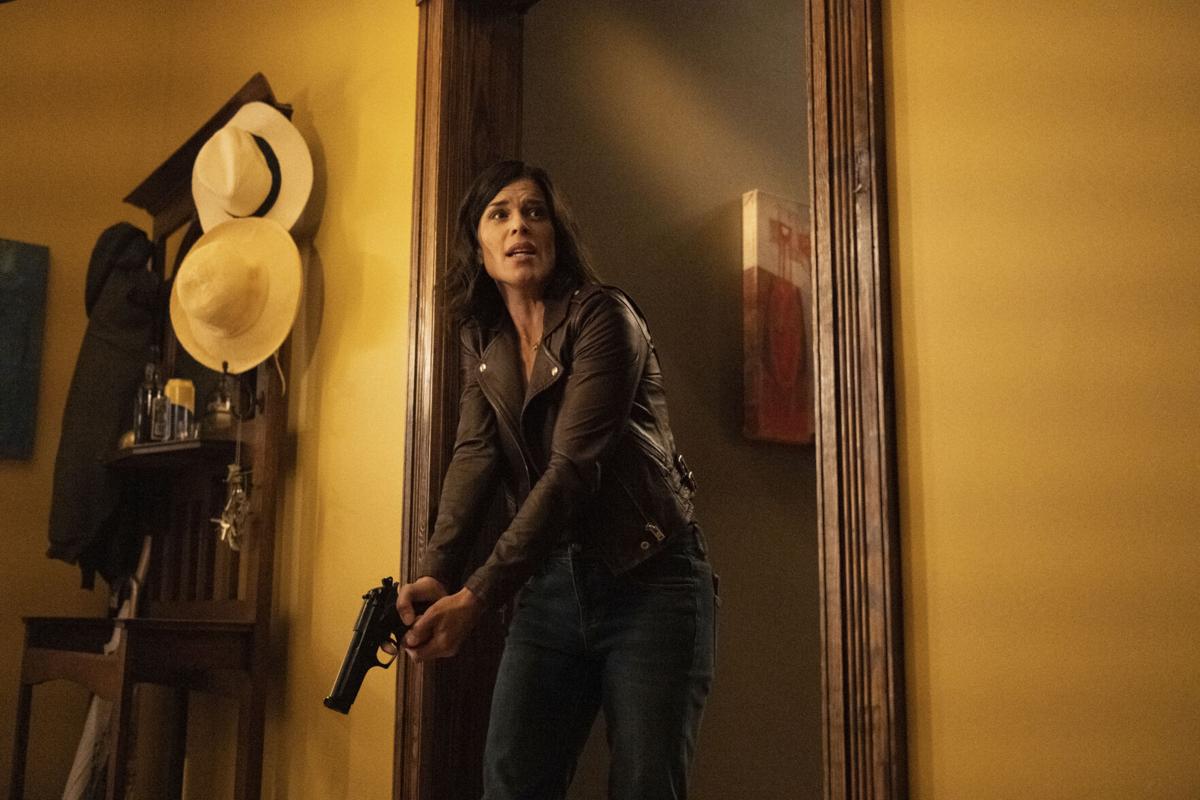 As a hilarious running joke about Stab 8 attests (the film features a buff Ghostface wearing a gold mask and brandishing a flame-thrower, in a clear nod to Jason X), Scream was never going to be some crazy sequel that threw caution to the wind and established an entirely new path forward for the franchise because, first, that’s not what anybody really wants. Secondly, it wouldn’t make any sense. Scream 4 was intended to kickstart a brand-new trilogy, but because it didn’t, there’s space to wrap this story up in a way that feels right for the franchise and its fans. Happily, Bettinelli-Olpin and Gillett, in conjunction with their skilled co-writers, justify making a sequel without cynically begging for further entries in the process of doing so. By showing just as much love for the past as understanding of the present, Scream conjures up a fast-moving, razor-sharp, viciously violent and sufficiently surprising modern slasher of which Craven himself would be proud. It may not be perfect, but it’s still Scream, and really, what more could we ask for?