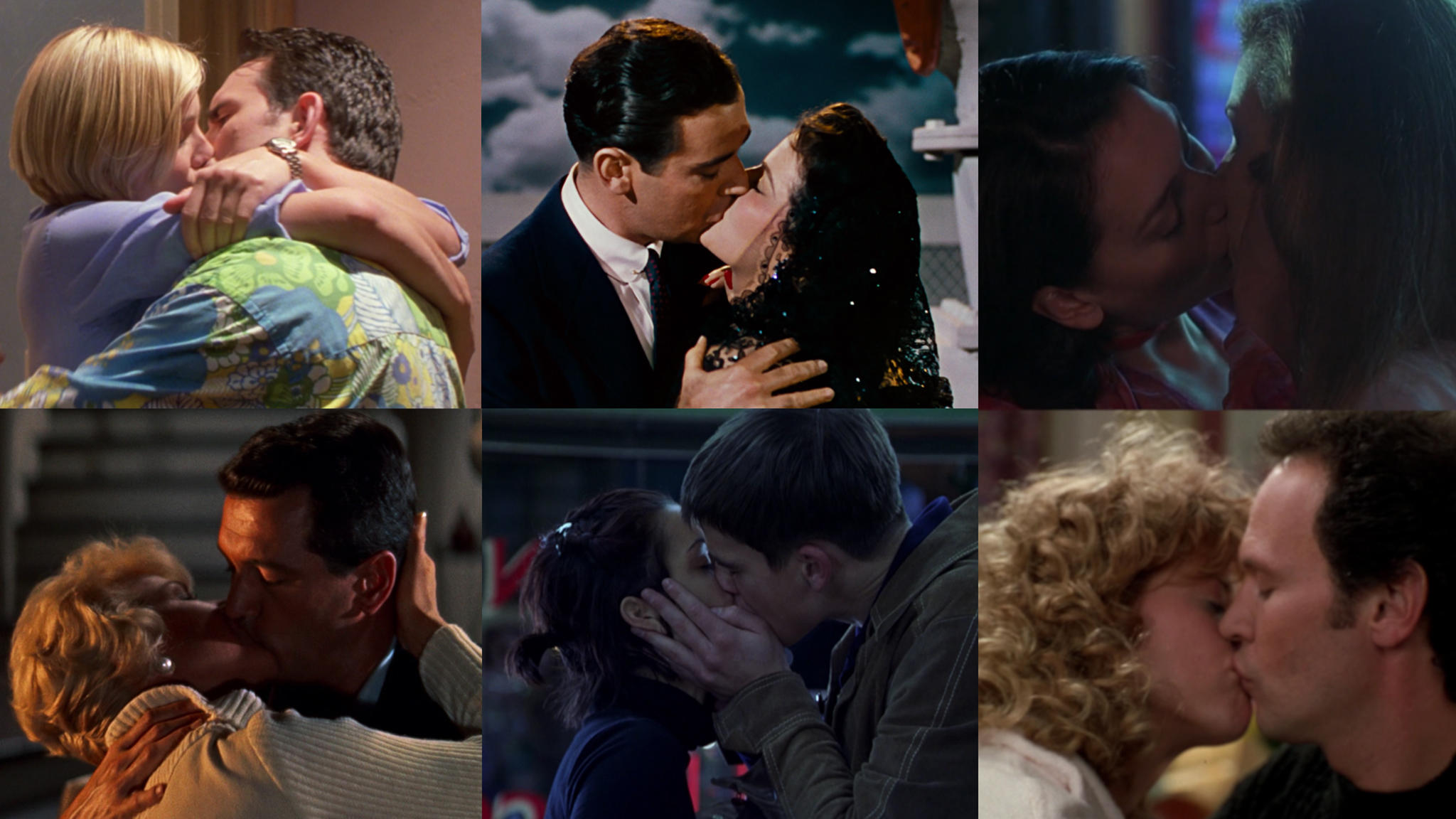 How many times can we see people falling in love before its gets old? Well, according to filmmaker and musician Elizabeth Sankey, 160 times is not even close enough. That is the amount of films, spanning from a period from 1934 to 2018, that Sankey injected into her debut film, the aptly titled Romantic Comedy. And she definitely could have added more.

Romantic Comedy is constructed as a long video essay made entirely of movie clips. The film plays both as both a love letter and a call-out to the genre, one that Sankey grew up on. In it, the director, who also edited the film, reflects on her almost loyal admiration for romantic comedies before addressing how problematic some of the plots and tropes have become through a contemporary gaze. Joined by friends and colleagues whose interviews are only heard through audio and without introductions, Sankey creates a multifaceted voice that manages to deconstruct, for better and worse, the appeal that popular cinematic love stories have had in the last couple of decades.

It’s quite easy to connect to the “Greatest Hits” aspects of Romantic Comedy, as there is an undeniable charm in watching montages of Hugh Grant mumbling or Renée Zellweger stumbling. In these moments, however, Sankey goes beyond the superficial delight of the genre to shed light on its darkest aspects, such as the lack of diversity or the oblivious pushing for toxic relationships.

But despite drawing attention to the genre flaws, Sankey maintains an optimistic view of the genre’s ability to explore human behaviour. The director, who talked with Vague Visages before premiering Romantic Comedy at the Loco London Comedy Film Festival, believes in the narrative power of watching people falling in (and sometimes out of) love. “It can transcend and get the heart of humanity,” she says on the other side of a WhatsApp call.

Romantic Comedy marks a new collaboration with Sankey’s spouse and creative partner, Jeremy Warmsley. Their band Summer Camp provides the original score for the film. For its London premiere, Romantic Comedy was scored live by the director’s band.

After entering the festival circuit following an international premiere at the International Film Festival Rotterdam in February, Sankey is currently focusing on upcoming projects. With a new film on the horizon (she will not disclosure what is it about just yet) and a possible career in television, the artist seems to be on the right path. 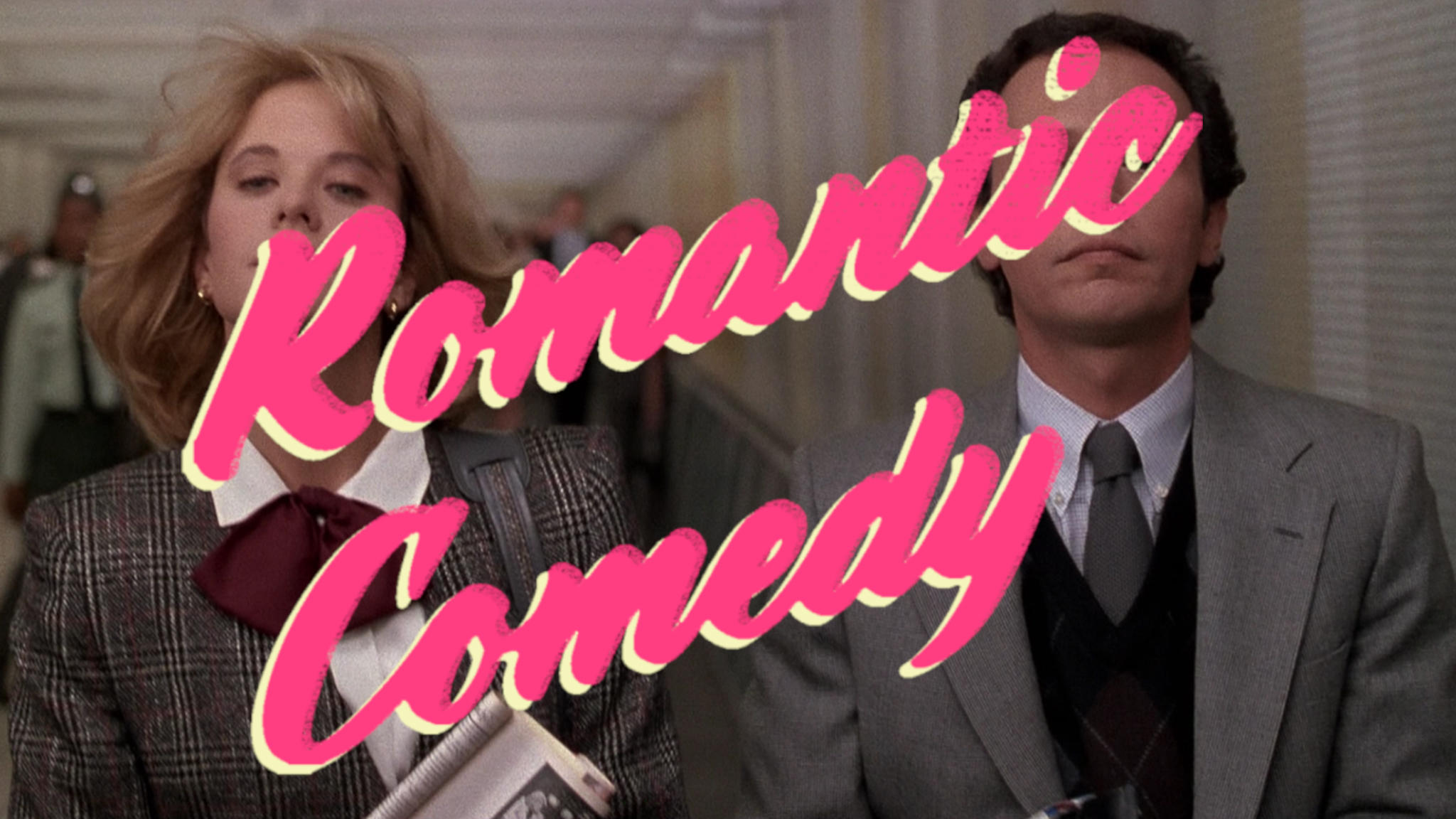 Pablo Starico Cadenazzi: Let’s start from the beginning: where did your first experiences with romantic comedies take place? At home or at a cinema?

Elizabeth Sankey: I think both. I would go to the cinema with my mom or my dad and watch new releases. I remember seeing In & Out with her. At home, my dad would show me romantic comedies like When Harry Met Sally and Housesitter. When I became a teenager, I started buying VHS tapes from charity shops, and I had this huge collection because it was so cheap to buy anything. But I definitely feel like romantic comedies are films that should be watched in a cinema with a big audience. That’s when they really come alive, with a shared experience.

PSC: A couple of years ago, you worked on the soundtrack for Charlie Lyne’s film Beyond Clueless. Did his analysis of teen movies inspire you to make something similar with romantic comedies?

ES: A hundred percent. When I knew I wanted to do something about romantic comedies, I was thinking that I could do kind of a one woman show and take it to Edinburgh, but, thankfully, I didn’t do that. When we wanted to do another album with the band [Summer Camp], we wanted something kind of visual, and so I was like “I could basically copy Charlie and do what he did with Beyond Clueless.” One time, we were with him at a party and I said “Charlie! Can I do this? Will you give me your permission?” and he was like “Yeah, sure, a hundred percent.” He’s a friend, and I’m a big fan of his work.

PSC: Do you remember the first steps you took to make the film?

ES: Initially, it was really important for me to interview other people from different backgrounds to be in this film. I’m very aware that I’m a white, middle class, straight, cis woman and that my experiencies of watching romantic comedies were different than other people. At the same time, I was going through all these films, grabbing clips and making folders of all the romantic comedies tropes like the “meet cute” scenes and the weddings. Originally, I was going to say what was terrible about these films and how they didn’t hold up, but then — in the process of doing the interviews — I fell back in love with the movies because everyone I talked to would say “The stories are really white, straight and all about privileged people, but they really helped me through a certain time.” I started to realize they had this amazing power, and it changed the plan for the film. 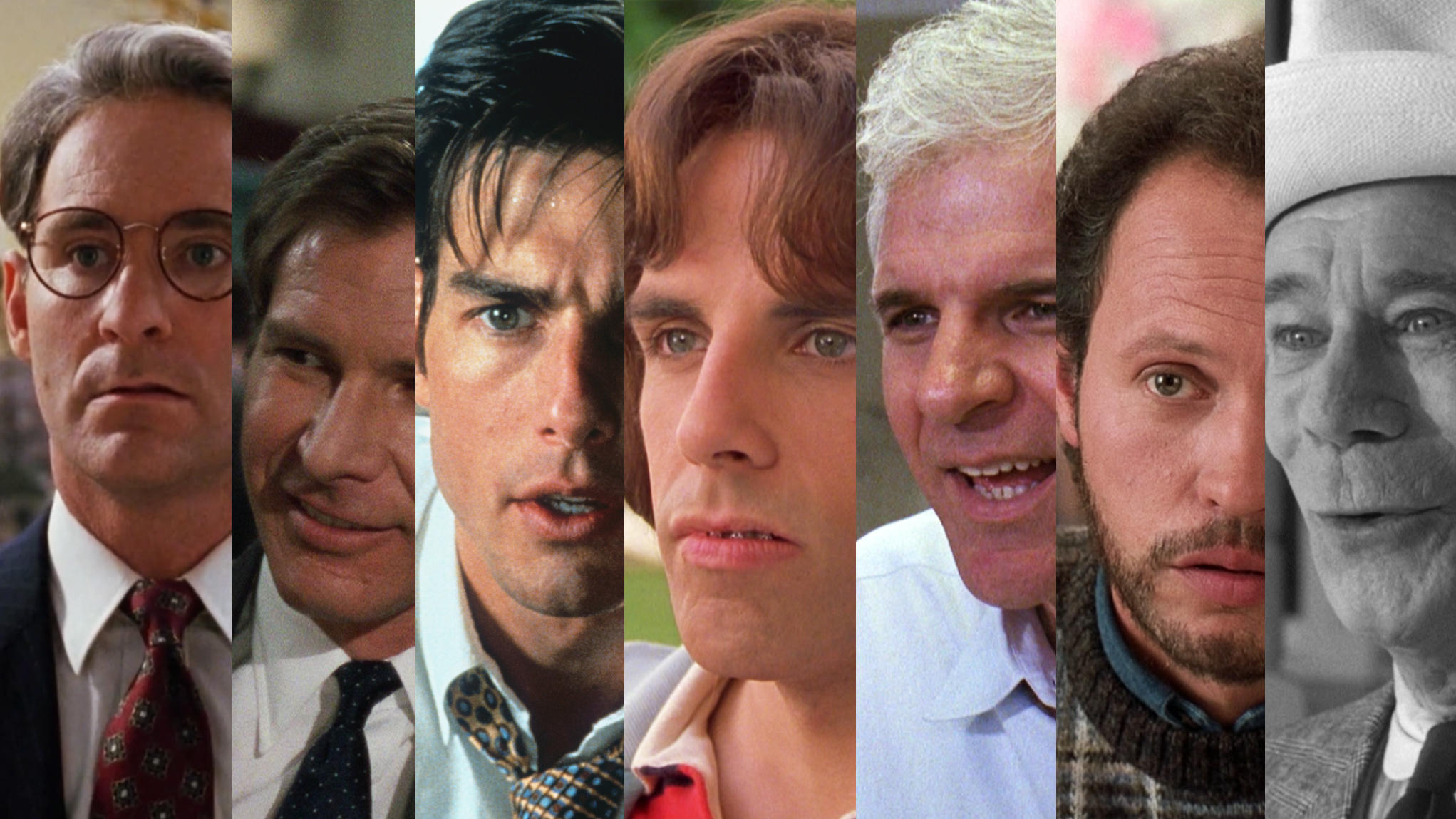 PSC: Why did you decide to make such a personal statement with Romantic Comedy instead of going for more of an “objective” analysis of the genre?

ES: I’m very comfortable being personal with my work because I’ve done it over a decade with the songs and stuff. I’m not an expert, not a film critic per se and I’m not an academic, so I wanted my experience to be personal because I don’t want to talk as if I know everything about the genre or cinema. The way that the romantic comedies had impacted me negatively was as a woman who was a bit naive and didn’t understand what was going on behind the scenes of these films — who was in power and what they were saying. It was really important for me being personal, as I find that when I watch something, I want to connect with the person who is making it.

PSC: What were the challenges of taking a video essay approach with a feature film? Did you ever feel overwhelmed by the editing process?

ES: I love watching these films, so it was kind of a couple of years of watching my favorite films as work. It was amazing. What’s great about romantic comedies is that because they have such a sort of ingrained and repeated arc, it very easy to know that there’s gonna be a meet cute, a kiss, a wedding scene, and there’s always gonna be a declaration of love. I knew what I was looking for. I had all these folders in [Adobe] Premiere with all those scenes. When it came to building the film, I just put the bits that I liked the most. That part of the process never drove me mad. What drove me mad was trying it make it be good because I really like editing and that was my happiest part of it, but I didn’t want it to be boring. I think that may have influenced how I edited, especially the first part of the film, which has more quick cuts. The second half is a lot slower with longer cuts and also is not as funny, but instead tries to create the emotional feeling of romantic comedies.

PSC: How did you and your partner, Jeremy Warmsley, tackle the composition of the soundtrack? How did you merge these two sides of your creative persona?

ES: We write the album at the same time as making the film. But there were some songs that we’d written before, when we were just doing the interviews. At some point, though, we said “Ok, we are going to have a song about how men are” or “We are going to have a song for the kissing scene.” We knew we needed these songs. I wrote the lyrics and Jeremy did the music. But I remember I wrote the lyrics for “Nice Guy,” the song about men, the week all the Harvey Weinstein stuff broke and I was really angry. There’s a version of that song a lot more angrier, but it just didn’t work. But Jeremy didn’t start the soundtrack until I finished the first version of the movie, when we knew pretty much what it was going to be. The soundtrack is so beautiful. I wish we ‘d been doing it earlier because I feel I could’ve let more space for him to do music. But that’s something to learn for the next time. 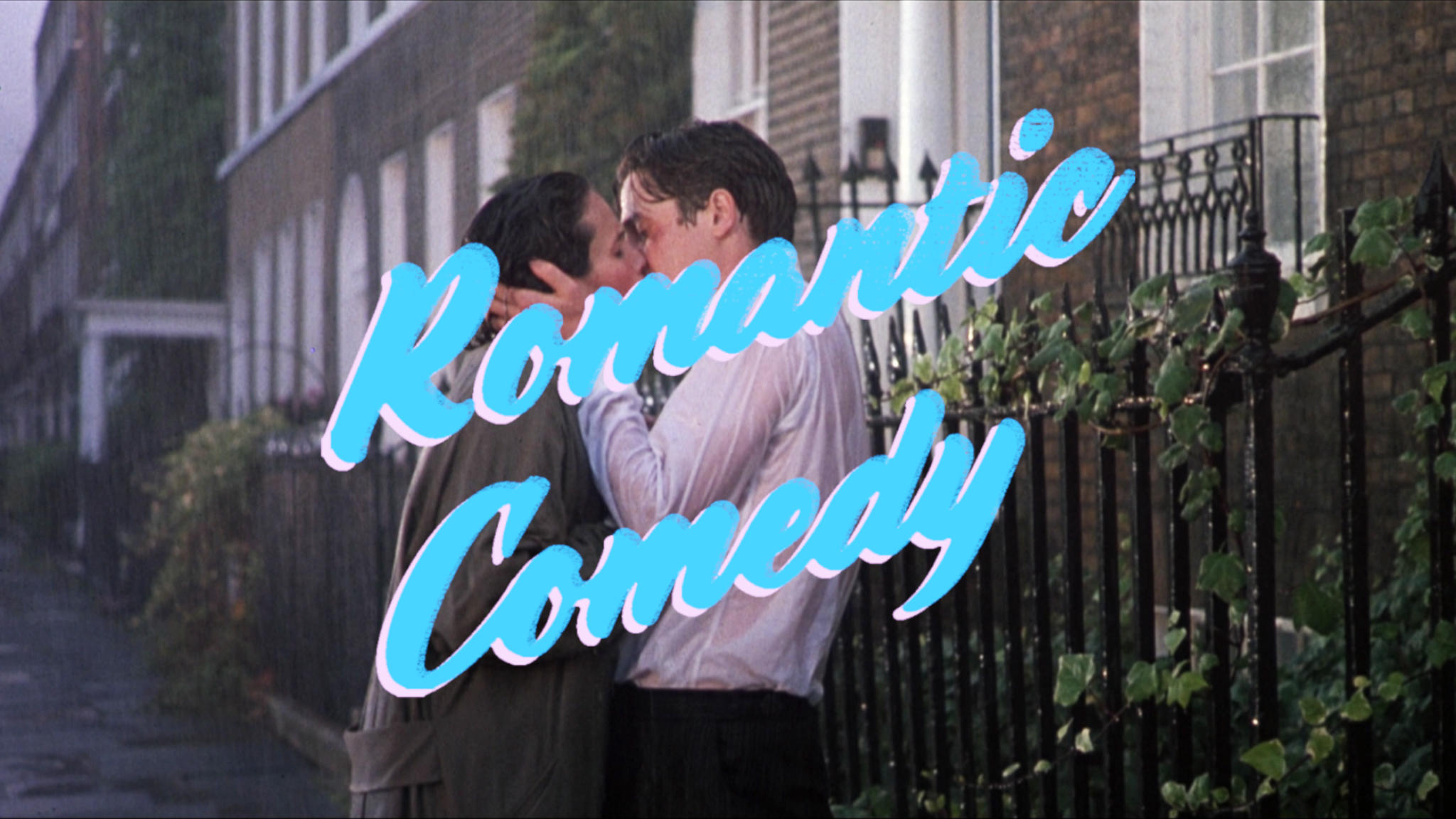 PSC: The film even shows a glimpse of what some critics and journalists have deemed as “a new chapter” for the romantic comedy genre. Where do you stand on this matter?

ES: I’m a big fan of the genre still. I have a lot of hope for it. I think there’s still so much more to do, and I think I want more romantic comedies to happen. I’m very enthusiastic and supportive about the fact that streaming networks and Netflix are creating romantic comedies. I think that’s great. I just watched Always Be My Maybe, and I really loved it. But I do think that romantic comedies are something you should watch in the cinema. I think they deserve that. They are part of an important genre, and they do have the power to expose new stories and characters and kind of worlds that we may have not seen before. Also, they are really cheap to make, so they are not very risky because there’s a huge audience for them. When I saw Long Shot, the audience was packed. I am very encouraged by the fact that Netflix is creating their amount of romantic comedies but also I’m a little bit wary of not getting them out of the “guilty pleasure” bracket that they still seem to be classified. They are pretty brilliant films, and we need great writers, directors and actors and actresses to make them.

Pablo Staricco Cadenazzi (@pstaricco) is a France-based Uruguayan journalist, film critic and member of FIPRESCI. He worked as a staff member for the newspapers El País and El Observador, and he is currently part of the the movie podcast Santas Listas (from @polentapodcast) and the comics publisher Pantano Editorial.