It’s Only a Movie: Audience Complicity in Horror and Exploitation Films 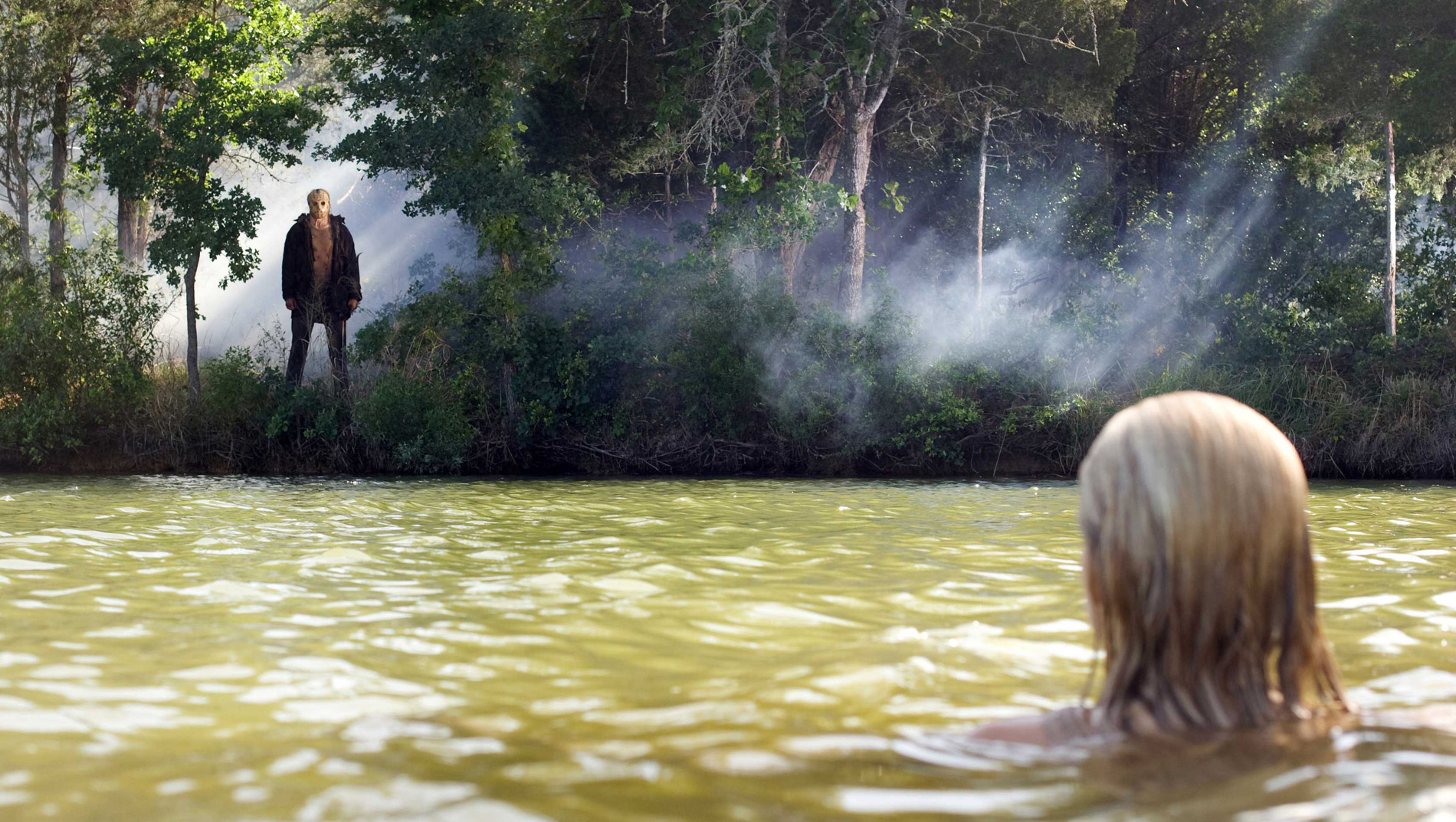 Who do you root for in a horror film? Do you want the tormented teenagers to survive their long night of terror, or do you want their masked marauder to take them down, racking up plenty of gory kills along the way? It would be dishonest to say that the violent, nail-biting set pieces in a horror film aren’t a major part of their appeal; watching body counts rack up in inventive ways is the sort of thing that generates countless sequels and remakes of films like Friday the 13th and Halloween. The role of the audience plays a certain morbid role in this; if they didn’t want to keep seeing men in masks hacking up teenagers, these films would never become franchises. And that’s why certain horror and exploitation films, steeped in equal parts transgressive material and postmodern theory, forcing audiences to look at themselves, out there in the dark, are so interesting.

Michael Haneke’s Funny Games (1997) is a lot of things, but subtle isn’t one of them. The horror film does more than just wear themes on its sleeves; instead, it declares them to characters and audience alike through a mixture of home invasions and narrative rule-breaking. The sociopathic Paul (Arno Frisch) deliberately brings the audience in on the action, through sly winks and direct questions. When asking Anna (Susanne Lothar) — one of the family members that he and Peter (Frank Giering) are torturing — to look for her dead dog, he turns and winks at the audience, a gesture that lies somewhere between a morbid flirtation, and the entering into of a kind of complicity: the audience knows Paul’s secrets, just as Paul knows theirs. Paul is the only character in Funny Games to break the fourth wall, doing so to make jokes, ask questions and even make sure that the film reaches feature length. By having this kind of relationship exist between the audience and only one character, Haneke creates the idea of someone who exists as a kind of dark surrogate for the audience: Paul understands the way that this game is played, as his final wink to the camera illustrates. But in knowing how these things work, Paul is also able to break the rules; the lack of survivors destroys the idea of a final girl trope, and that of the seeming sanctity of children, even in horror films. 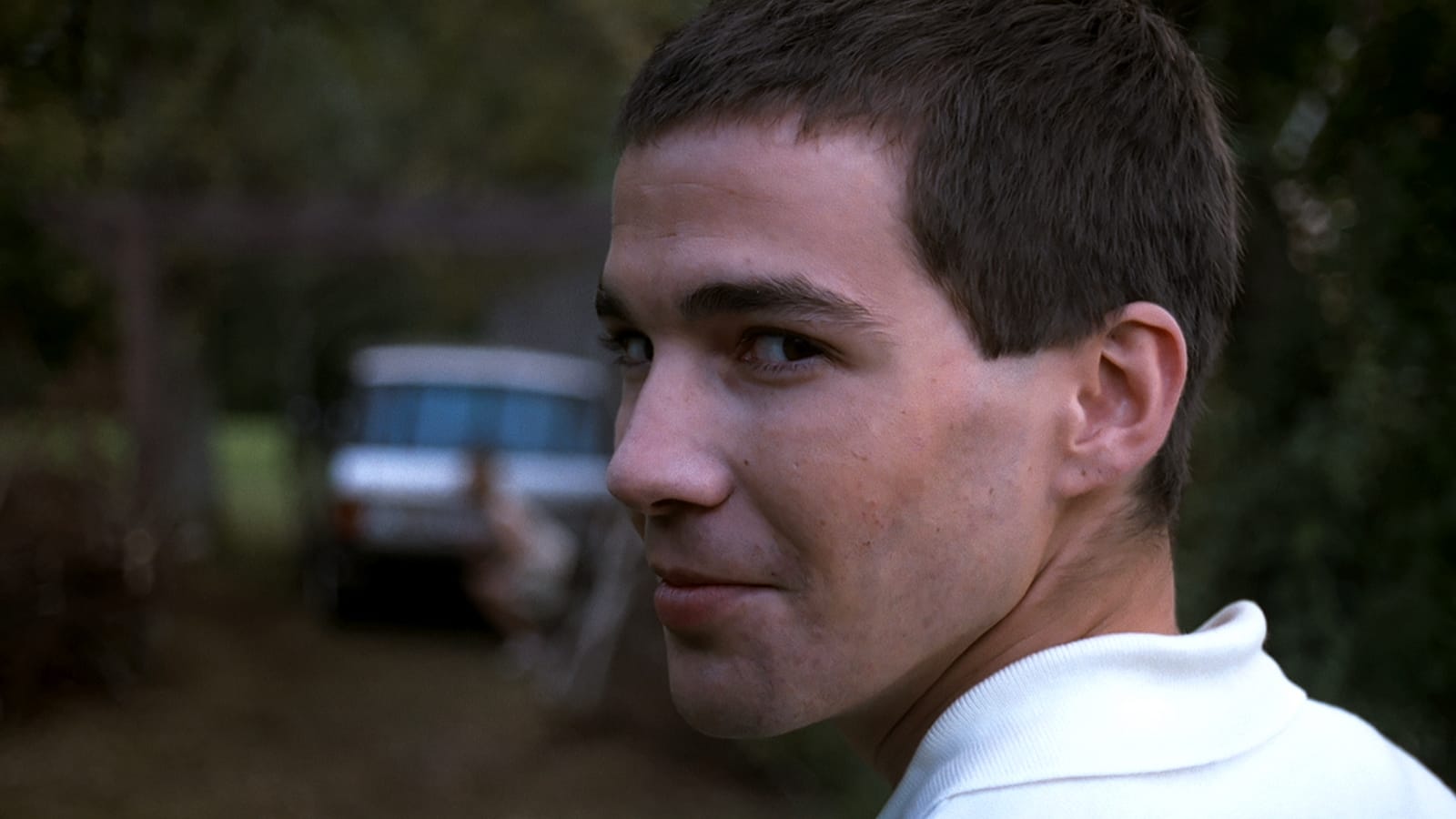 Sanctity isn’t something that matters much in Nikos Nikolaidis’ Singapore Sling. The horror film seems impossible to classify, occupying a perverse space between European art cinema and the grimmest and grimiest of exploitation films. Like Funny Games, Singapore Sling also breaks the fourth wall as a way to bring the audience in on the action. The film mocks genre conventions and forces a consideration of how we relate to the morbidity that we see on screen.

Singapore Sling creates a fascinating dynamic between sound and silence. The title character (Panos Thanassoulis) — a wounded and tortured private investigator, in love with the deceased Laura — never says a word beyond the inner monologue that explains his circumstances to the audience. Running in counterpoint to this is the direct address from the sadistic and incestuous pair of Mother (Michele Valley) and Daughter (Meredyth Herold), telling the audience what they do and why, bringing them in to the games that they play, making them more than bystanders; Singapore has no choice in the matter, but the audience can always choose to look away.

Daughter addresses the audience while sitting in a comfortable chair, by a roaring fireplace. She says it’s “night by the fireplace, [and] we’ve just finished with our chauffer.” With her casual demeanour, the use of imagery so associated with the gothic genre, the scene feels like an echo of the ways in which Rod Serling addresses the audience in The Twilight Zone and Night Gallery, explaining not only the world that they were to briefly inhabit, but also their place in it; asking questions, making them question themselves and their perceptions, something that would be standard practice in a place like the Twilight Zone. This comparison doesn’t feel too far-fetched for a film like Singapore Sling, which obviously calls back to other texts, like Otto Preminger’s Laura. But these moments of direct address do much more than show the audience the lineage of Singapore Sling, they also bring them in to the world of the horror film, with the collisions of sound and image forcing an audience to think about what they’re seeing, and their own place within it. 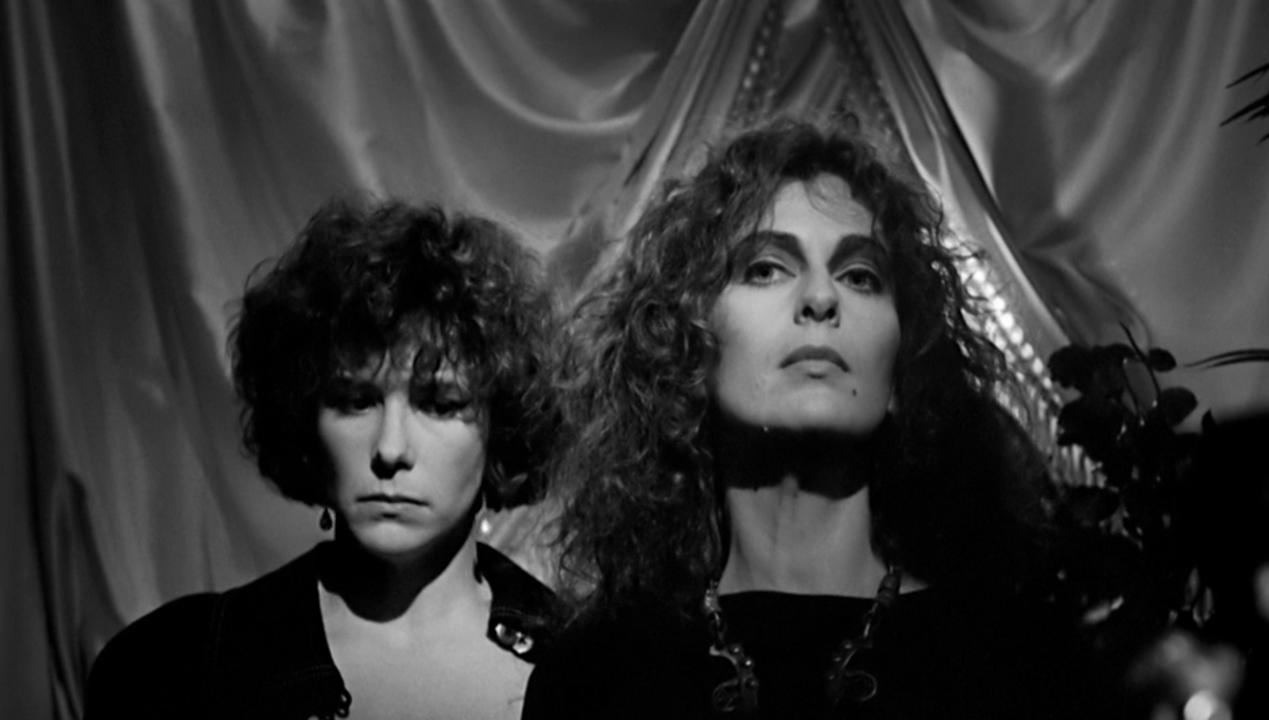 Daughter’s first recollection takes place early in the horror film, and her dialogue leads to, and overlaps with, the first scene of incestuous sex between her and Mother; the dialogue guides the things that the audience sees, acting at once as an act of confession and implication. The incestuous sexual dynamic between Mother and Daughter offers a fascinating look into the ways in which fantasy and reality make for uneasy bedfellows. Throughout the film, Daughter pretends to be Laura — presumably the same woman Singapore is looking for and loves — and on occasion the line between the two of them becomes blurry, as if Daughter’s own identity is lost in the roles that she plays in her games with Mother, and later, with Singapore. Layers of performance like this are interesting in a film that plays with postmodernism; it forces questions of fantasy and reality, fact and fiction, and just how much of this it’s possible for an audience to keep themselves at a safe distance from.

These ideas are also present in Funny Games, when home invaders Peter and Paul discuss the line between fantasy and reality. The self-aware Paul makes the case that if fiction is observed by an audience, then it’s just as real as reality itself. This theory puts the audience in a difficult position, forcing them to consider the (un)reality of the torment that they’ve just seen; by witnessing it, have they made it real? Questions like these are the ones that define the satire of media violence that works alongside the film’s postmodern horror; the most striking image in Funny Games is of a TV playing in the background of a killing, with blood dripping down the screen and onto the floor; an unsubtle but unshakeable nod towards the ideas of the violence in the media, another arena full of a potentially complicit audience, bemoaning what they see, but constantly going back to see more of it.

This is the DNA that Funny Games shares with Natural Born Killers, Oliver Stone’s mass media answer to Bonnie and Clyde. The horror film uses frantic editing and the backdrop of a media obsession with the film’s two killers as a way of challenging what audiences want, and why. Natural Born Killers mixes the monstrous and the mundane through the kind of media that seems innocuous; one section, “I Love Mallory,” takes the form of a parody of sitcoms about dysfunctional families, TV shows that don’t exactly dance around the edges when it comes to the potential for explosive violence. 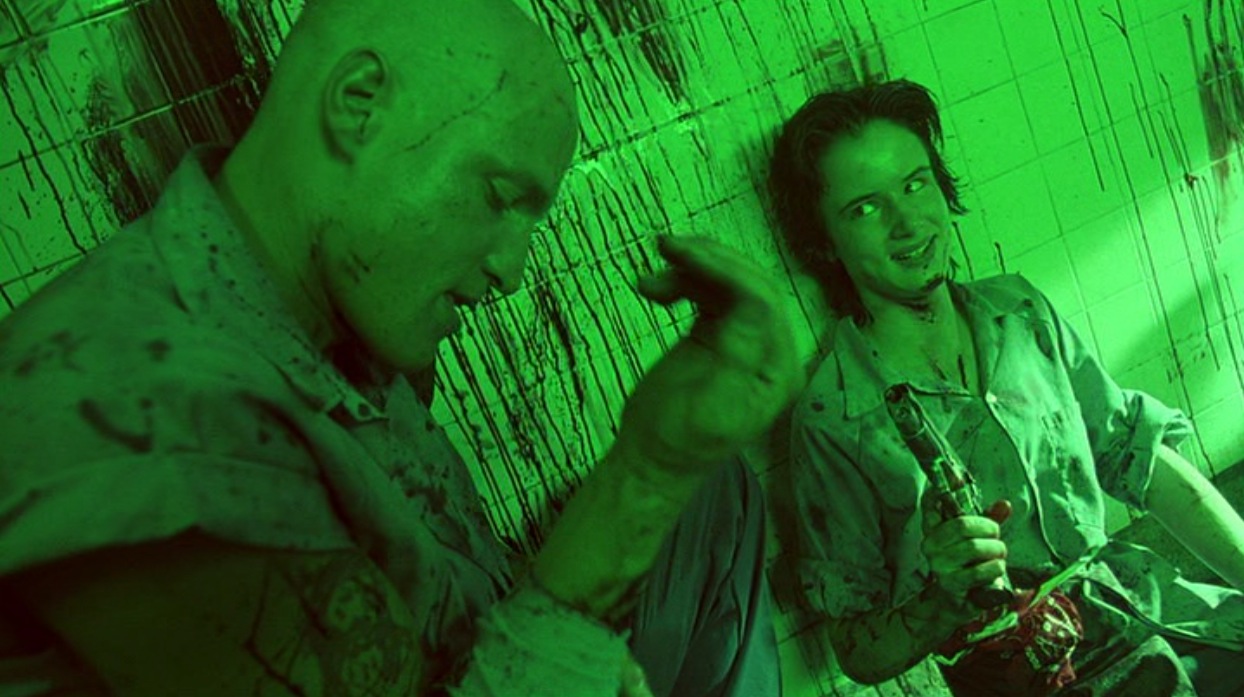 While it might be easy to assume that horror films like Natural Born Killers and Funny Games simply demonise their audiences as wanting the thrill of violence without thinking about the consequence of it, the films instead ask questions, instead of only providing answers. One telling moment of this agenda comes in Funny Games when the family are asked to bet on their survival, before the audience themselves are then asked if they would bet on the family. The question is impossible to answer; the characters would never hear anyone that said yes or no, but the question of “would you bet on them?” has another layer to it: “do you want to bet on them?” — the question of who an audience member roots for is brought into the light here; betting on the survival of the innocents is as much about what someone would want to see as much as it’s about what genre conventions they expect to see.

These three horror films share interesting strands of DNA, from modes of address to opinions on mass media; although they’re an unlikely trio, they engage in a conversation with each other, and with their audiences: they dare you to keep watching as much as they dare you to look away. While they’re full of uncomfortable content, the questions that exist underneath the violence and morbid sexuality are where the real horrors lie. If it ever gets to be too much, if the questions are too invasive, or the answers are too difficult to confront, there’s always a way out of the conversation. Just keep repeating: it’s only a movie. Only a movie. Only a movie.

Sam Moore (@Sam_Moore1994) is a writer, artist and editor. Their writing on the intersections of culture, queerness and politics has been published by The Los Angeles Review of Books, i-D, Little White Lies and other places both in print and online.