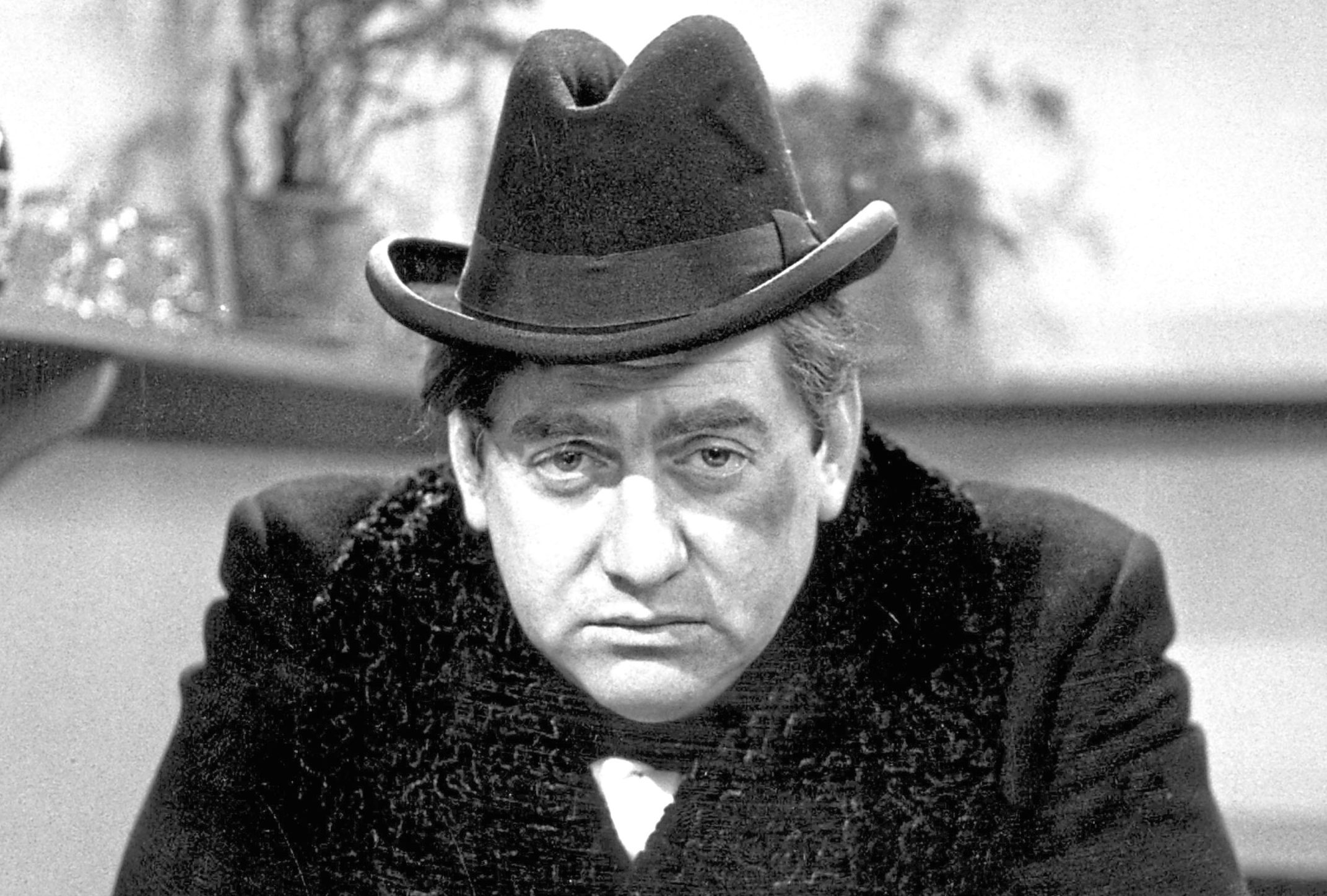 It is difficult to convey the full extent of Tony Hancock’s fame at the turn of the 1950s. First on radio and then on television, Hancock’s Half Hour established the conventions of the situation comedy and endeared the host to a burgeoning mass audience. Hancock and his collaborators were determined to shift British comedy away from the trappings of variety towards reality; this determination met with general acclaim, speaking to a post-war sense of ennui from which entertainment had hitherto shrunk. Hancock’s kitchen sink despondency was no less instrumental in bringing a new grittiness to popular culture than Woodfall Film Productions or the Angry Young Men. At its peak, the television series was watched by 27 percent of Britain’s adult population; one in three TV-owning homes tuned in to see the latest instalment in the travails of Anthony Aloysius St John Hancock of 23 Railway Cuttings, East Cheam. Hancock’s Half Hour was the definition of appointment-to-view television, as the nation’s streets cleared for each new episode. The Tony Hancock persona tapped into a uniquely British strain of malaise, which manifests itself in a fractious fatalism, a dread of impotence which finds its expression in outlandish displays of petulance, pettiness and pomposity.

Yet it was never enough for TonyHancock. Blighted by chronic alcoholism, domestic turmoil, crippling self-doubt and relentless perfectionism, Hancock set about stripping away everything in search of the truth until nothing remained, severing fruitful professional relationships when they threatened to lapse into familiarity and formula. For all the specificity of his comedic milieu, Hancock propounded a universal theory of comedy. He sought to transcend the proscriptions of the medium; he yearned to become an international comedic figure on a par with Charlie Chaplin or Jacques Tati, and he understood that film was the only vehicle for achieving this. With his long-time writers Ray Galton and Alan Simpson, Hancock set about excising from his work anything which smacked of provincialism; the very provincialism upon which his character’s popularity rested. (This decision was spurred by a meeting between Hancock and Oliver Hardy, who when asked about how he could universalise his comedy, advised Hancock to “cut out the slang.”) Hancock’s estuary locutions gave way to a more generic metre. The Hancock of The Rebel (1961) is a tidied up variant on the Hancock of old; his horizons have broadened, yet his desperation is undimmed.

What remained at the end of this process was a comedy which excavated its protagonist’s abiding preoccupations: his fear of mediocrity, his inability to connect, his desire for recognition, his self-destructive impulses. This was a personal cinema which struggled to reach an uneasy truce with the populist form. Tony Hancock was at war with himself, and the screen was his battlefield. In The Rebel — renamed Call Me Genius in North America — Hancock plays a Wilderian office drone who yearns to flee the nine-to-five grind and lead the life of an artist. It was a premise which got to the heart of Hancock’s dilemma: whether to embrace the security of conformity or set off on the perilous path to self-expression. Just as his character’s artistic longings are undermined by his lack of vision, so Hancock’s desire to abandon the small screen is sabotaged by his personal demons. Hancock used to berate himself in front of the mirror before every performance, and The Rebel feels like an equally lacerating self-appraisal, laying bare the acuteness of Hancock’s impostor syndrome.

The Rebel is the story of a man of minimal talent who claims credit for something that is not his; one can certainly detect in this the tensions and insecurities that existed between Tony Hancock, Galton and Simpson, whose professional partnership was severed by the star for fear that it was becoming stale. Upon arriving in Paris, Hancock befriends Paul (Paul Massie); a struggling, unassuming painter who is immediately overshadowed by the blustering dilettante, whose “hideous daubs” are hailed by the cognoscenti as the vanguard of the “infantile school” of painting. Paul leaves Paris defeated, but when his paintings are mistaken for Hancock’s by a renowned art critic (played to suave perfection by George Sanders), Hancock pretends they are his. The final act deals with Hancock’s struggle to keep up the lie he has perpetrated; as the initial acclaim fades, the practicalities of his imposture begin to bite. The Rebel has its fun at the expense of the art set, with its own conformity and credulity, but it is intrinsically an exploration of self-doubt. Hancock’s deception will ultimately be exposed to the world’s scorn; trapped within the hollow construct of celebrity, he is as beholden to the machinations of commerce as he was when he was a lowly clerk. 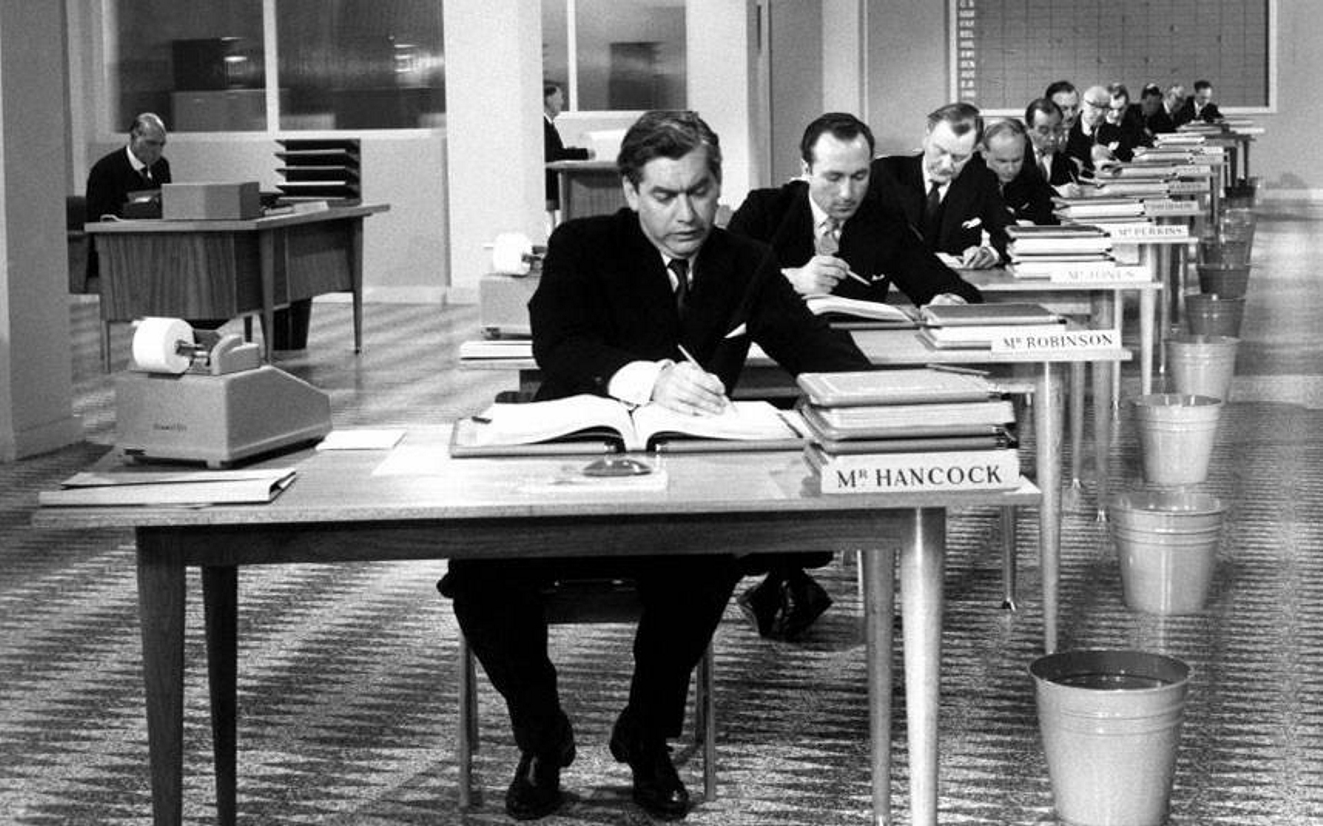 Tony Hancock’s character seeks to escape the context in which he is firmly entrenched; yet for all his exertions, he cannot shake off his essence. For Hancock, his established character is drudgery; it is predictable, familiar, repetitive; it is stasis, consolidation, a career track. Following the first flush of fame, Hancock spent the rest of his life trying to run away from his shadow, trying to evade the spectre of expectation. Hancock was a masterful comic performer; he had a face that was made for the dimensions of television; his close-up enlivened the small screen. But it is clear in The Rebel that Hancock is not a cinematic actor; his endlessly expressive face seems lost amidst the film’s vivid Technicolor; his famed reactions merely become a facet of the compositions, rather than the focus. As with Peter Cook, something fundamental is lost in the transition to the big screen, that spark of spontaneity and mischief the small screen afforded is dulled by the demands of filmic craft, character and actor equally trapped in stultifying routine. The transition was equally tough on Galton and Simpson, who seem out of their element away from the down-at-heel territory to which they would return with Steptoe and Son (remade in the U.S. as Sanford and Son).

The discursive, introspective tenor of Tony Hancock’s comic universe doesn’t quite translate to the structural rigours of film narrative; with the result being that The Rebel plays out more as a string of ingenious but loosely threaded sketches. The restless inner monologue is intact, and Hancock’s imploring blue eyes burn from the screen, but one cannot escape the feeling that creative paths were diverging in front of our eyes. (Galton and Simpson’s increasing exasperation with their temperamental star equally informs the characterisation of Hancock as a charlatan who is exploiting the work of another.) The Rebel feels like another stage in what Hancock saw as a reduction of his art to its quintessence, but increasingly seemed like a pathological desire to prove himself as a comedic auteur in his own right. It is the last hurrah of the Hancock character as it had come to be codified on radio and television, but there are some chilling portents of the darkness that would envelop Hancock’s life as his drinking spiralled out of control, his career floundered and his depression intensified. Among the bohemian caricatures which people the Paris art scene is Josey (Nanette Newman), a pale-faced, black-clad existentialist who asks: “Why kill time when you can kill yourself?”

Without Galton and Simpson to guide him, Tony Hancock ventured further inwards for The Punch and Judy Man (1963), a deeply personal work which evokes his childhood in seaside Bournemouth, and explores the slow disintegration of his marriage. What is so strange about The Punch and Judy Man is that, for all Hancock’s professed internationalism and dismissal of his erstwhile writers as “colloquial” and “parochial,” he should produce a work so mired in the gaudy traditions of the British coast. Following the failure of The Rebel to make a dent in the global consciousness, Hancock’s follow-up feels like a retreat into the familiar. The Technicolor is ditched in favour of stark monochrome, and Hancock’s earthy locutions have returned. The film tells the story of Wally Pinner (Hancock), who ekes out a bare living performing “Punch and Judy” puppet shows on the beach of Piltdown Bay, while his social climbing wife (Sylvia Sims) is the primary breadwinner as the proprietor a souvenir shop. The Punch and Judy Man was conceived as a “Chaplin-style” film, and there is certainly something of the Little Tramp in Pinner, a lowly figure who becomes the unwitting disruptor of social order, puncturing provincial pretensions with a blundering class consciousness. The prevailing atmosphere of The Punch and Judy Man is one of social-realist slapstick; its moments of comic extravagance are tethered to a low-key political commitment.

The Punch and Judy Man is one of the most unusual and downbeat British comedies ever made. It is even more episodic than The Rebel, bereft of Galton and Simpson’s ability to craft sitcom-like through-lines which lend sketches a narrative context; there are moments that are pure observation, allowing Tony Hancock to indulge in the kind of self-contained clowning that film comedy seldom permits. There are few films which capture a state of aimlessness so well; in this regard, it is strikingly modern, with moments that have a proto-hangout piquancy. Hancock and co-writer Philip Oakes trace the shifting social sands of early 60s Britain, where wartime austerity was giving way to the wilful indulgence of a consumer culture that would sweep away the traditional amusements Pinner and his cohorts offer (ironically, Hancock was one of the first beneficiaries of this shift). This transition is symbolised in the ice cream parlour where Pinner struggles at length to eat an elaborate “Piltdown Glory” (like the coffee bar in The Rebel, it is a development to which Hancock’s character is reflexively resistant, rejecting the froth on his cappuccino to the consternation of the waitress. In each instance, Hancock finds himself in a combative posture against the promise of novelty; there is something inherently suspicious to him about anything that presents pure pleasure). 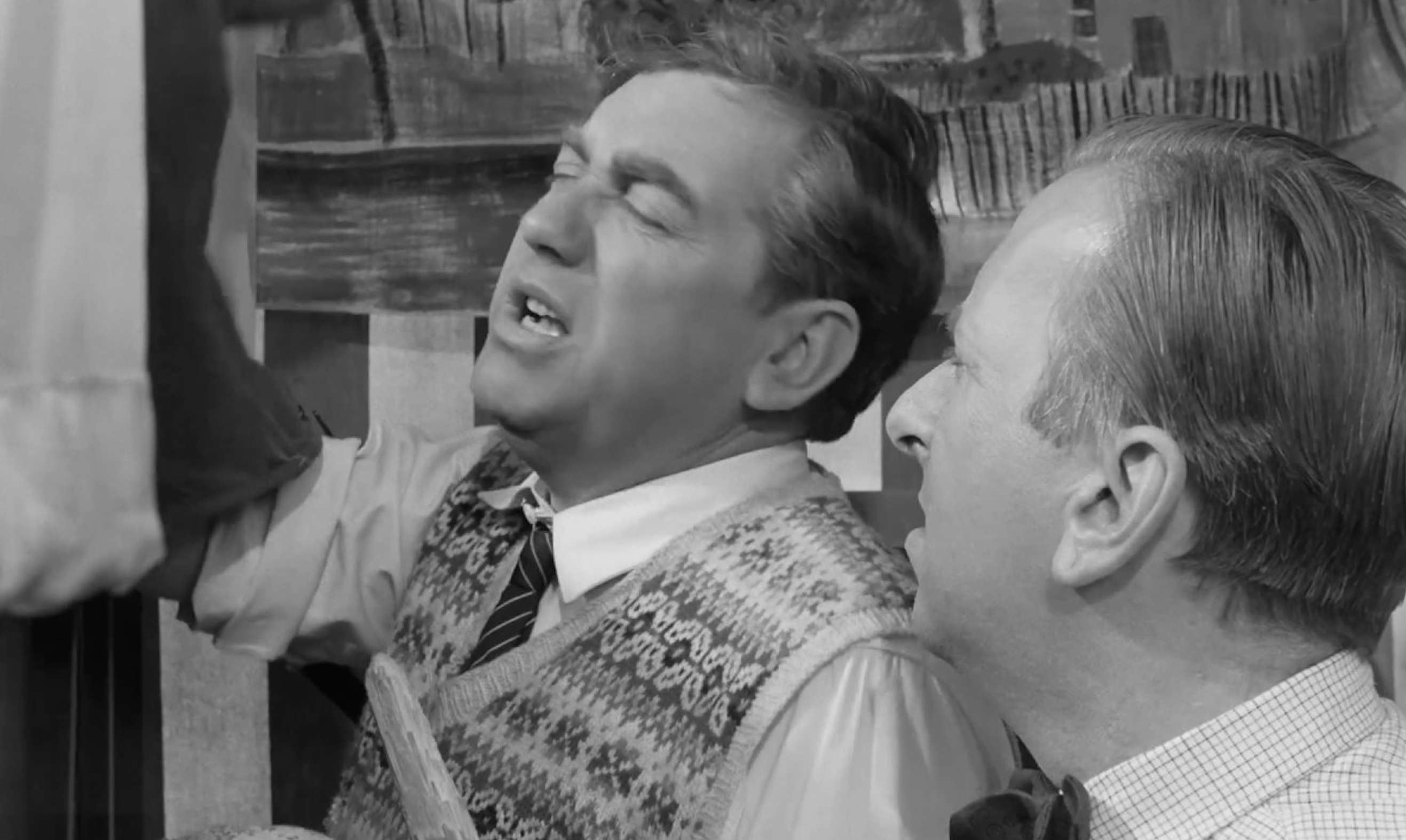 Tony Hancock perceives in Pinner an echo of his own precarious position, the gradual narrowing of his options resulting from self-inflicted wounds. He is a man trapped in a trivial profession, in which things go wrong too many times. The world of The Punch and Judy Man is inhabited by characters settling into a comfortable oblivion; like Sandman (John Le Mesurier at his measured best), a sand sculptor who leads a solitary existence in a shack under the pier. Impermanence is built into everything Sandman does. Yet Pinner envies Sandman’s freedom, speaking to Hancock’s own misgivings about responsibility and commitment. The stifling regimentation of Pinner’s home life is contrasted with the gallows bonhomie he enjoys with what his wife describes as “dreadful theatricals.” The theatricals derive an odd sort of pride in their obsolescence; they doggedly defend the periphery they have staked. In Hancock’s case, his comfortable oblivion was drink. As his career declined, his alcoholism intensified. (Richard Briers described Hancock as “the first victim of television comedy.”) As B.S. Johnson says of Sylvia Plath: “I must yet question the value of these poems. After all, they did not save her, did they.” One gets the same feeling about Tony Hancock; that for all the catharsis of his comedy, it could never compete with the desire for obliteration his drinking fulfilled.