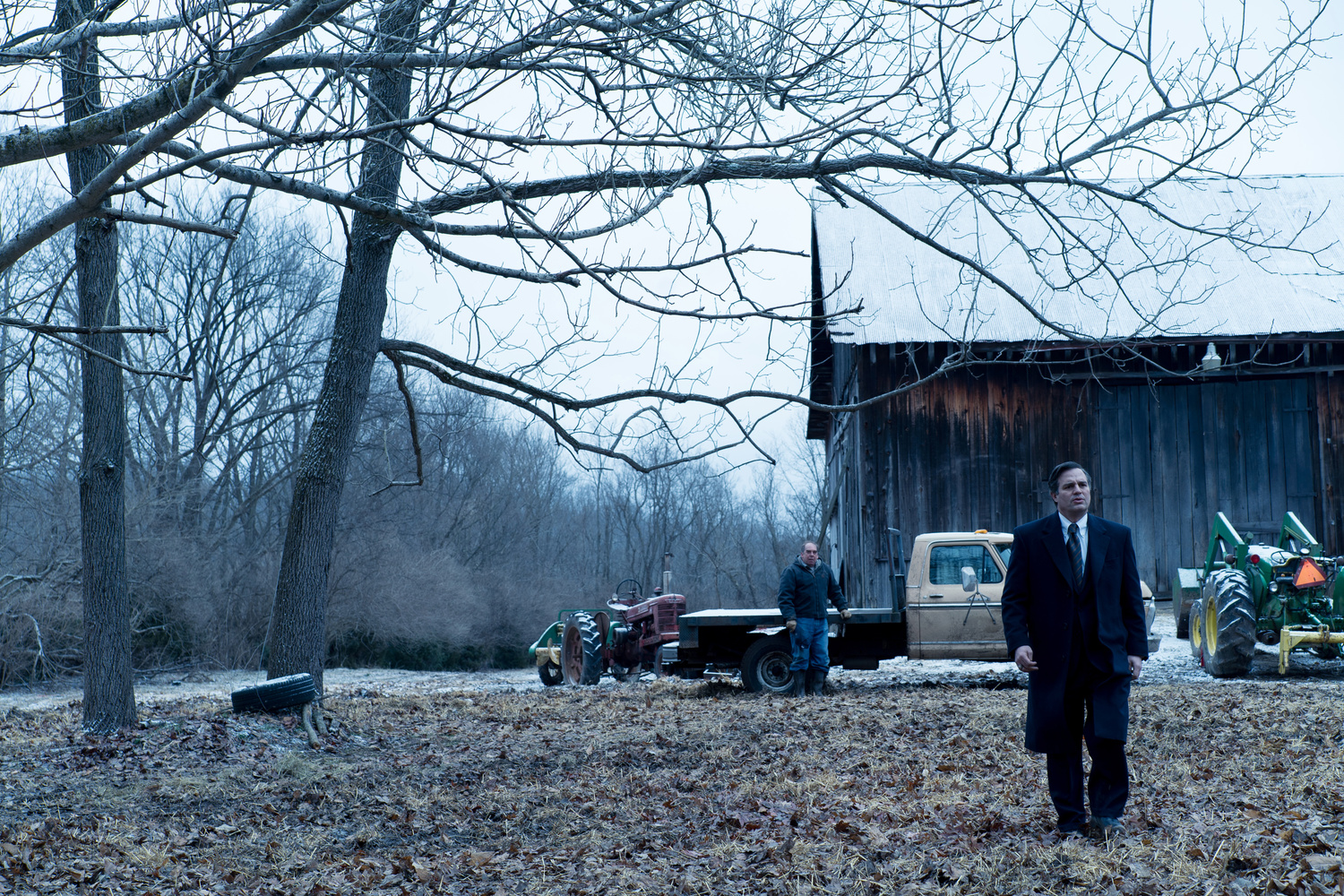 At a post-screening Q&A for Dark Waters, director Todd Haynes categorized his new film as a “whistleblower movie,” referring to what is perhaps the most common type of political conspiracy thriller. Productions like All the President’s Men (1976), The China Syndrome (1979), Silkwood (1983) and The Insider (1999) belong to this category, and certainly Dark Waters fits easily in as well, as it too is the story of a figure who bravely and perhaps foolishly attempts to take on injustice that’s perpetrated and protected by a monolith of political power. There’s another aspect to these films, however, and that’s their deliberate, pointed commentary on the political issues of the modern day. All those films have an immediacy to them, and some depict events that occurred a mere few years prior to their release. It’s a quality that makes these movies feel particularly vital, transcending generalized stories about the human condition and becoming a form of immediate cinema. Recently, there’s been a heated debate about what cinema is or is not, and Mark Ruffalo (famous for playing Bruce Banner in the Marvel Cinematic Universe) — perhaps feeling the pressure to prove the breadth of what cinema can be — produces and stars in Dark Waters, bringing along the unexpected but welcome Haynes in an attempt to bring this sub-genre of cinema back. For the most part, they’ve succeeded.

Ruffalo plays Taft law attorney Robert Bilott, who stands apart from most whistleblower movie protagonists by not initially being a crusader. Instead, he’s a lawyer who is more than happy to work for and with big chemical companies, having just made partner at the firm when a farmer, Wilbur Tennant (Bill Camp), turns up unannounced during a meeting with a box full of videotapes that he insists are some sort of mysterious evidence of land poisoning. Bilott goes to investigate, in part because Tennant is from the lawyer’s old home town of Parkersburg, West Virginia, where the DuPont chemical company has had a presence since the 1950s. A mass grave of dead cattle and other sick animals alarms Bilott enough to start digging, and it’s only when his ostensible friend Phil Donnelly (Victor Garber), a DuPont suit, starts stalling and belittling him that he begins to suspect something wrong is going on at the company. From there, Haynes and screenwriters Matthew Michael Carnahan and Mario Correa plunge Bilott into a insidious corporate conspiracy regarding the manufacture of the wonder product Teflon and its “forever chemical” named “PFOA,” a synthetic compound that is indestructible, causing human ingestion to lead to a number of serious diseases. Ruffalo plays Bilott with a world weary, hangdog demeanor, a man already meek due to his lower class upbringing and being amongst a peer group of silver spoons, who then has more and more weight put onto his shoulders, from fear as well as an innate sense of responsibility. Haynes cleverly and deliberately contrasts Bilott with Ruffalo’s Oscar-nominated role as a journalist in 2015’s Spotlight, with the two characters sharing a passion for a pursuit of the truth but with Bilott seeming almost existentially doomed. The director and star heavily imply that a clean and final victory should not be hoped for.

Dark Waters’ narrative is intense and propulsive, so much so that it’s not a surprise yet still a disappointment that its characters are hastily sketched in. The fantastic cast are all great to watch, imbuing their roles with enough individuality and quirks to make them stand out, and Haynes has an impressive feel for the details of both the blue collar world and the Byzantine, coldly oppressive realm of corporate law — cinematographer Edward Lachman shoots the film in desaturated shades of blue, further evoking the movie’s 70s vibe. Yet every character is a bit too rote, with Bilott’s wife, Sarah (Anne Hathaway) being relegated to the Frustrated Yet Supportive Spouse role and Bilott’s boss, Tom (Tim Robbins), being an vaguely distant patriarchal figure. Even Bilott himself is given a few shades of deeper characterization that the film isn’t interested in, making sure to focus on the Tennant case whenever possible. This leaves Dark Waters feeling perhaps a bit too distant, yet it makes the events seem that much more relatable, allowing the characters to feel like stand-ins for the audience.

That aspect of Dark Waters also contributes to its strongest element, which is emphasizing the creeping and immediate real-life horror of the story. At first glance, it may seem like an odd choice for the director known for films like Carol (2015) and Velvet Goldmine (1998) to make a throwback political thriller, but Haynes also made the not easily-classifiable horror films Poison (1991) and Safe (1995), and Dark Waters is in the spirit of those. Haynes is able to wring terror from something as subtle as the increasing number of years the story spans on screen, the number steadily ticking up as the case drags on. He begins the film with a scene that evokes Jaws (1975) and more specifically Joe Dante’s Piranha (1978), where a group of kids go illicitly skinny dipping in DuPont’s runoff lake. The aspect of paranoia that goes hand-in-hand with the whistleblower movie is certainly present, as is the tension of Bilott’s obsession with the case taking over his entire life for the better part of a decade. But the highest degree of fear comes from Haynes’ close-ups of intimate details loaded with eerie subtext: a flower garden, a dog chasing its own tail, a young girl’s blackened teeth. Haynes takes Dark Waters’ final postscript revelation, a statistic that PFOA exists in 99% of humans, and makes the idea of mass poisoning a pervasive menace that saturates the film with dread. Added to the bureaucratic nightmare that is the legal system and the corporate financial power to control the system, it makes for a horrific combination. To be sure, Dark Waters may have a downbeat climax, to the degree that may not be considered a climax at all, yet it’s a film made to inspire action, to underline the idea that this crisis is a modern one — it’s still happening, and it’s not resolved. It’s a movie that can hit home surprisingly hard — at one point, Bilott goes over a list of diseases spurred by prolonged exposure to PFOA, and that list includes two conditions this writer has suffered from before, conditions the doctors couldn’t provide an explanation for at the time of diagnosis. Rob Bilott can provide an explanation, and that’s the flip side to his ultimate revelation in Dark Waters: we are our own destructors, and only we can protect ourselves. It’s a notion both horrific and inspiring, just like the film itself.