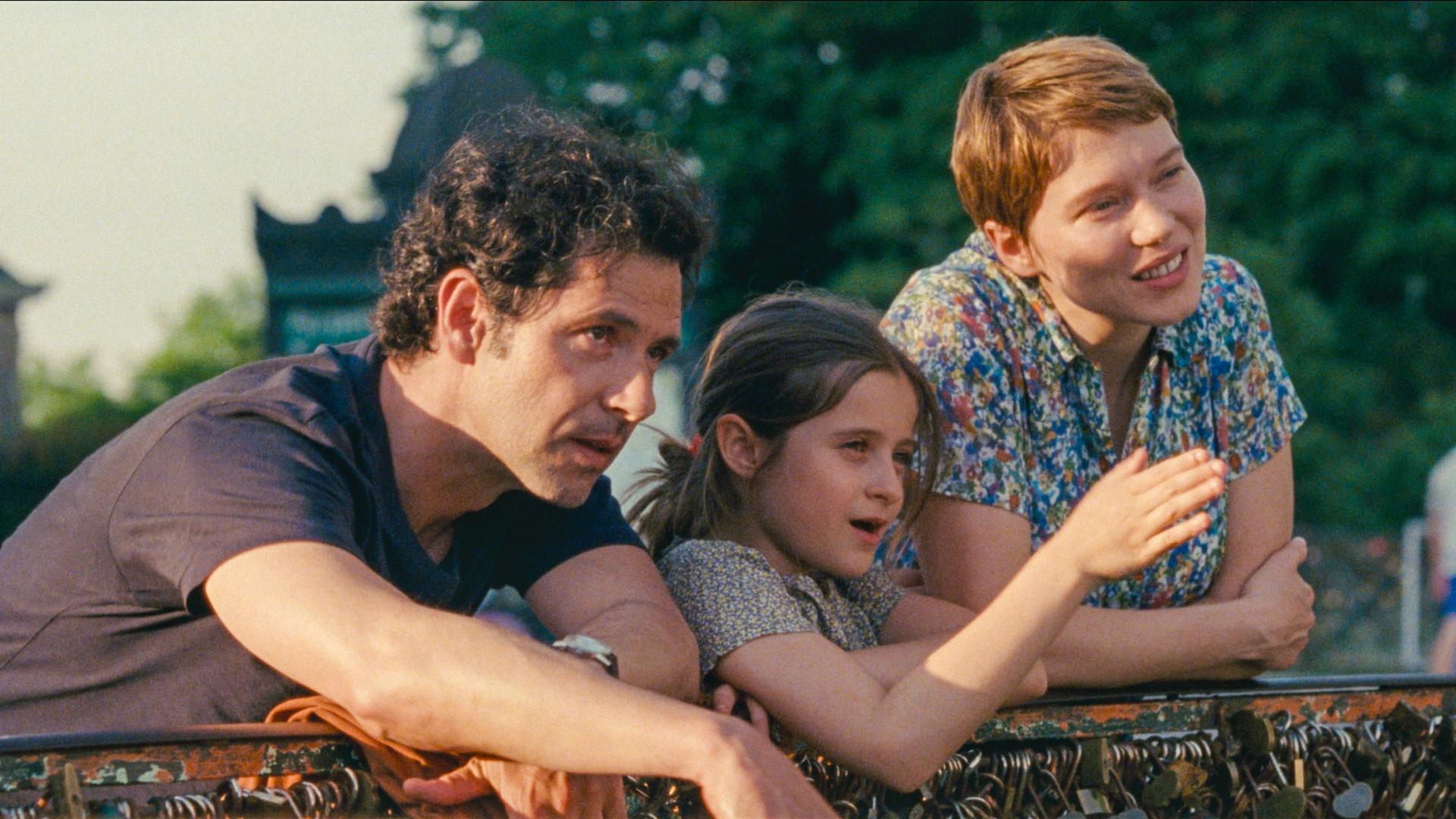 With One Fine Morning, Mia Hansen-Løve has built another tender, warm and often beautiful world inhabited by flawed people seeking fulfillment. This is a world filtered through the personal life of Sandra (Léa Seydoux), who raises an eight-year-old daughter in Paris as a single parent and translator while looking after her father, Georg (Pascal Greggory), after he develops a neurodegenerative disease.

Sandra’s job requires the tools her romantic and familial relationships could also benefit from (and, over the course of Hansen-Løve’s 112-minute film, they do). She provides words for people who don’t have them, which becomes the case with her father, a philosophy professor who learns to live again — a concept that Sandra embraces upon meeting a man named Clément (Melvil Poupaud). 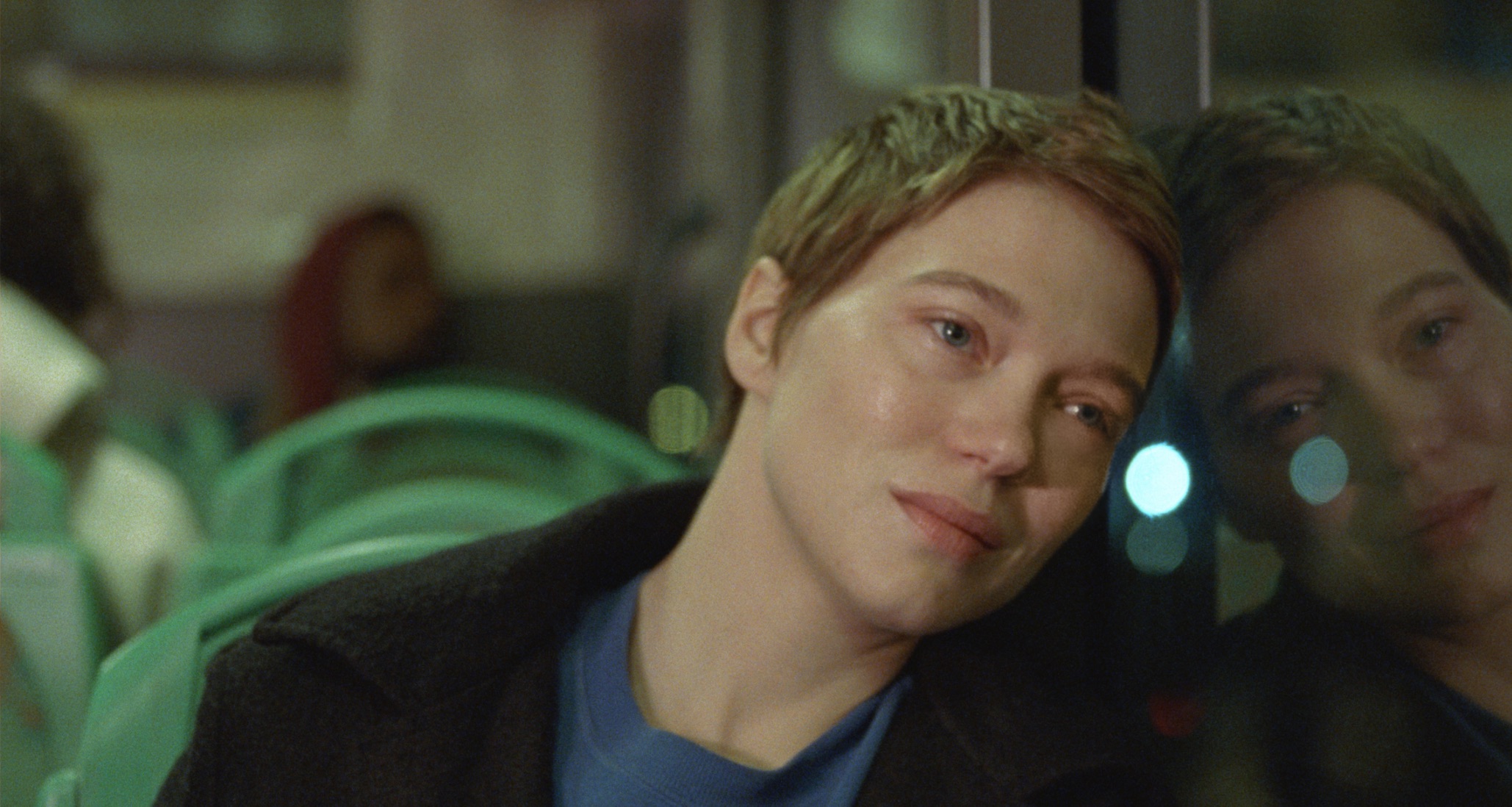 There are moments of genuine hilarity in One Fine Morning, which often come from Sandra’s mother, her father’s ex-wife Franҫoise (Nicole Garcia) and stories of escapades with Extinction Rebellion. A highlight is a car conversation when Franҫoise recalls a protest that led to taking down a portrait of President Emmanuel Macron in an important building. Her second husband reminds her that she voted for her president, to which she responds, joking about gender stereotypes and differing interiorities, “You can like and dislike something at the same time. It’s too complex for you.” One Fine Morning’s persistent sense of humor, despite the narrative situation’s adversity, complements other key scenes, such as Sandra’s exchange with her daughter Linn (Camille Leban Martins) on film tastes. Sandra comes out of the cinema with complaints that the kids’ film they just saw was not calm or real enough, to her daughter’s frustration. Later, there is a joke about Frozen 2,  with Sandra citing similar reasons about noisy and expensive kids’ blockbusters neglecting cinematic importance.

One Fine Morning is an exercise in comparatively calm, delicate cinema. It balances serenity with pathos and never strays from realism, in contradistinction to Hansen-Løve’s previous film — the highly metafictional, altogether more playful Bergman Island (2021). With this more grounded approach, there is profound sadness in One Fine Morning. This is captured in isolated moments, such as a single tear rolling down Sandra’s eye silently as her father struggles to hold his brain together, or in the way she must choke an unexpected sob when bumping into one of his curious students. 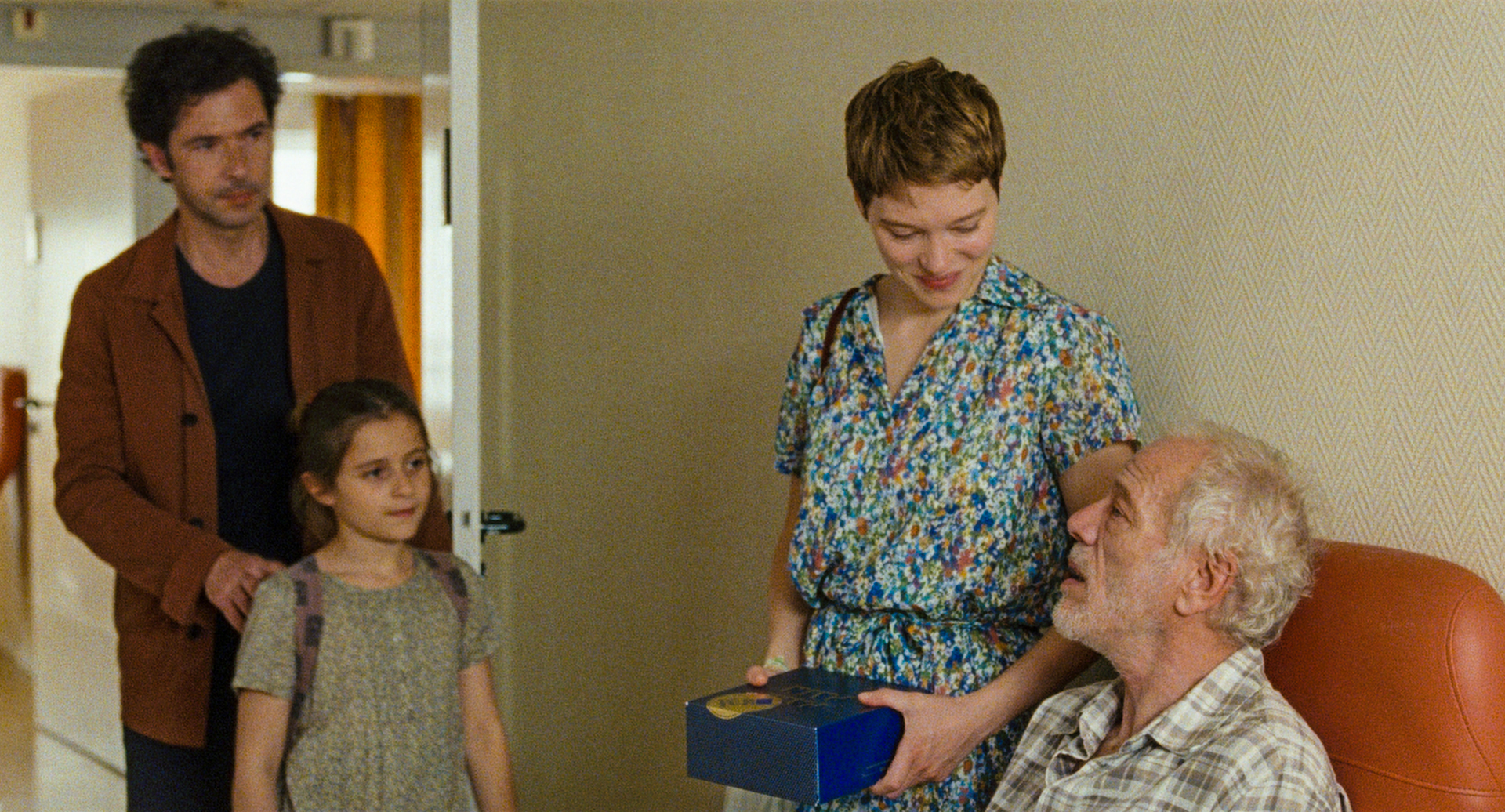 Sandra strikes up a friendship with this student as One Fine Morning goes on, giving many of her father’s precious books to her when they must clear out his flat and find him the right nursing home. One of the film’s most beautiful moments (and there are many) comes during one of these deliveries. Becoming justifiably overwhelmed by the emotional gravity of moving her father from home to home, all the while deciding which of his things to keep and which to pass on to others, Sandra talks about how hard it is to part with his books. As she tells Georg’s student, it is particularly hard to give away his literature because there is more of him in them than in the shell of a man at the nursing home.

But One Fine Morning is a story of perseverance and clinging on. As such, motion and activity are motifs, and can be seen all around Sandra. Early on, Linn tells her mother about “shooter drills” that got them hiding under their desks or running to exits at school. Elsewhere in the film, Linn moves across a gym floor during her fencing class. With Clément, Sandra childishly chases him around a Parisian garden. As a trio, Sandra, Linn and Clément row out to a park as a new family enjoying a day out. 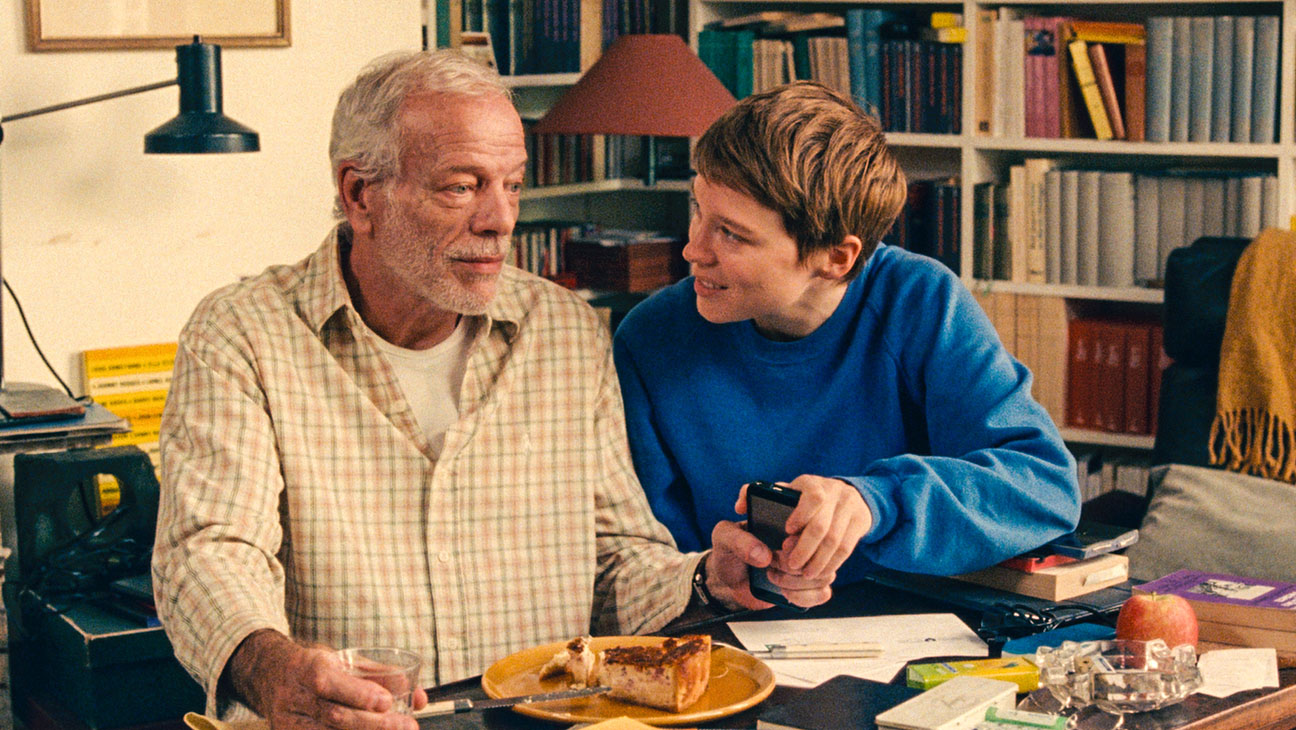 One Fine Morning is structurally on the move too, passing through the seasons as Sandra and Clément’s love grows while Linn becomes increasingly attached to her new father figure and Georg’s health begins to stabilize. Another memorable moment in One Fine Morning comes early on when the focal mother and daughter meet with a relative. As Hansen-Løve’s film depicts Georg’s health struggle, a cameo scene reveals that Sandra’s grandmother is comparatively sprightly, despite being 98 years young. Her turn of phrase in this conversation and its English translation syntax have stuck with me. When talking about how she doesn’t need a walking stick, the grandmother continues to reflect on her own optimism despite her natural decline and the subsequent limitations on her health. She touches on something that applies to everyone, in this film and outside it: “everything in need of repair.” 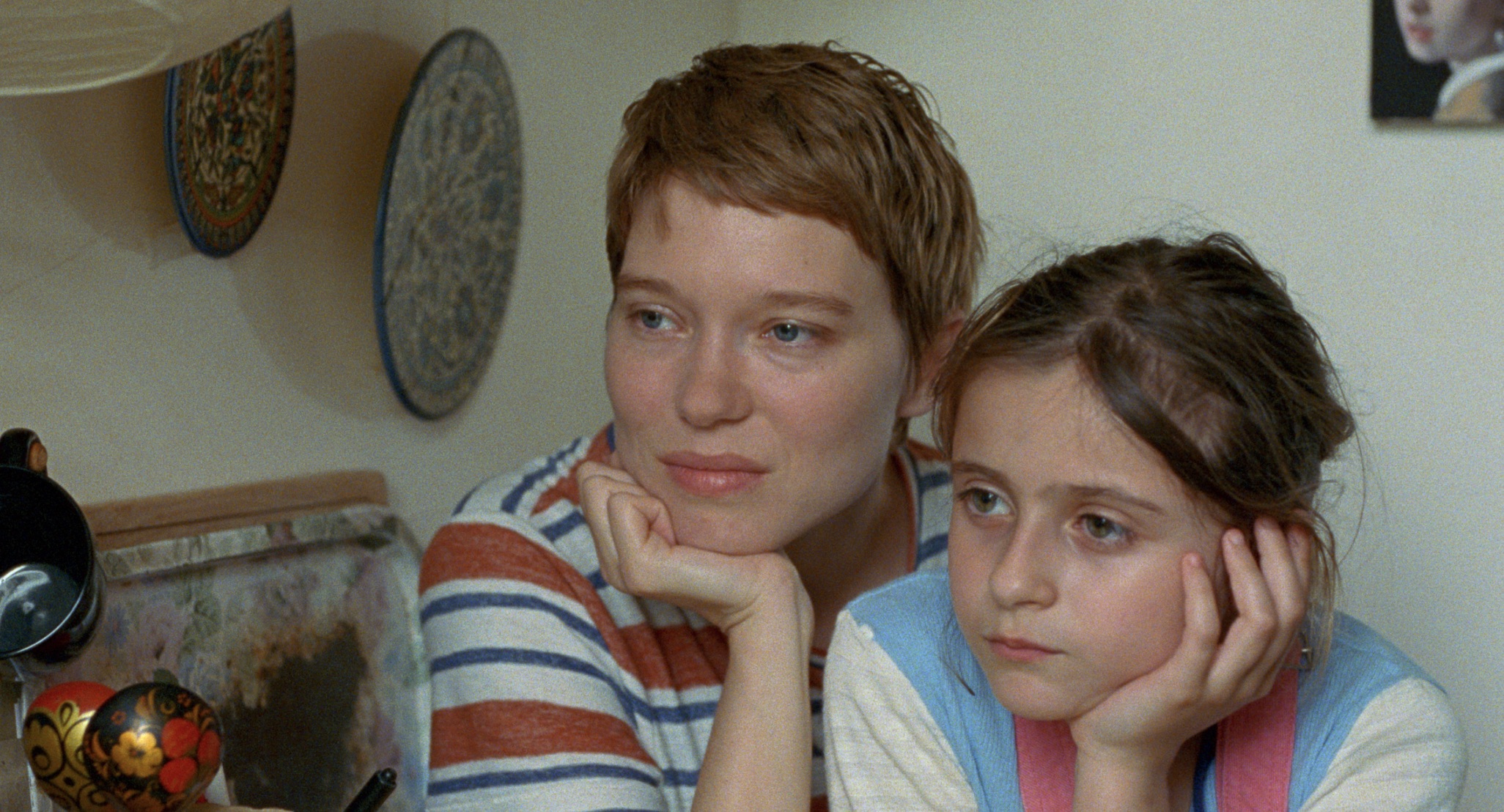 Continuing in the vein of the seven feature films leading up to One Fine Morning — accumulating their narrative interests in divorce, heartbreak, extra-marital affairs, the pursuit of new love, aging and mental health — Hansen-Løve’s eighth movie is perhaps her clearest distillation of everything needing repairing. To date, One Fine Morning is also her most gentle and moving demonstration of the tools and methods required to do this.