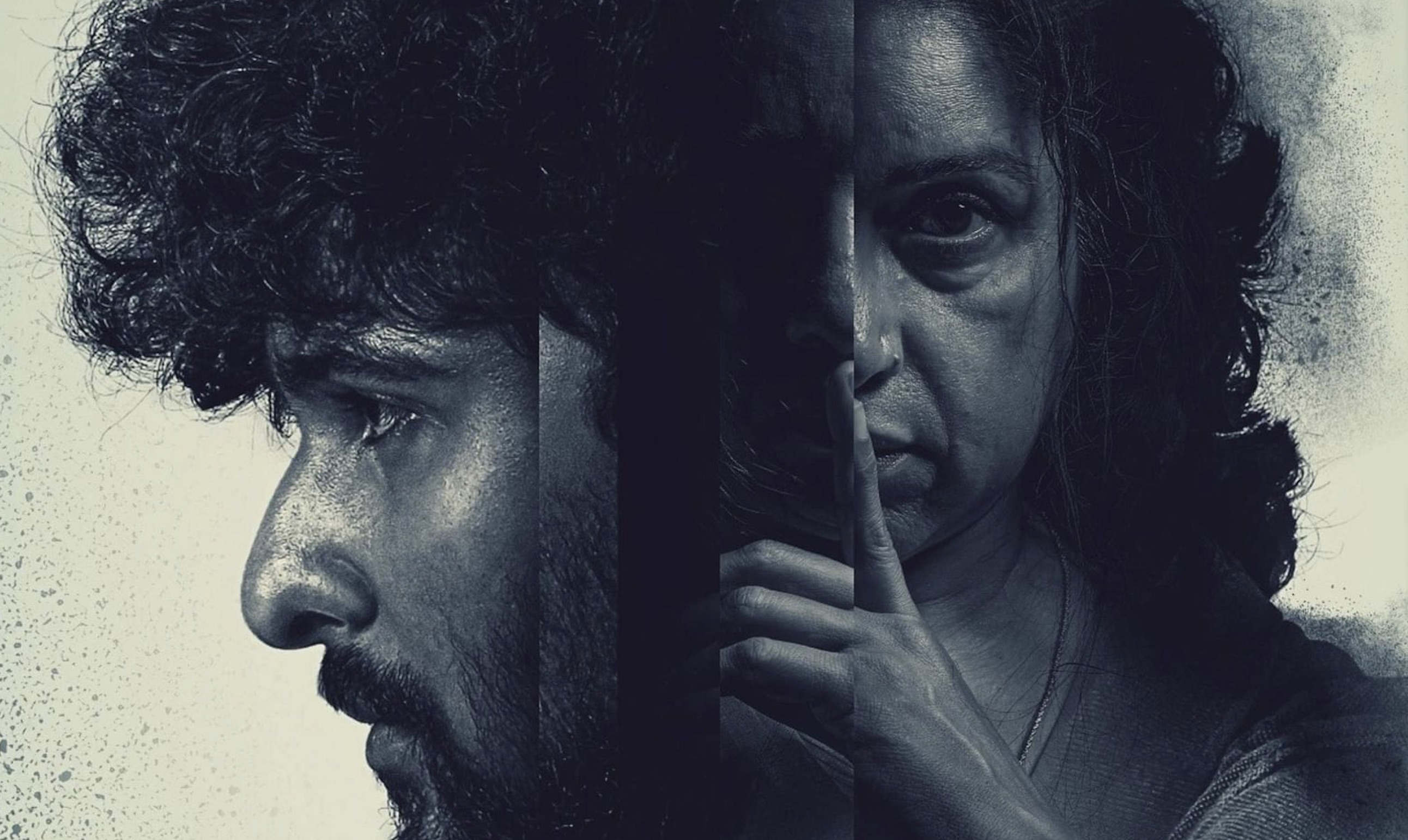 Now streaming on SonyLIV, Rahul Sadasivan’s Bhoothakaalam (2022) is a slow-paced tale of familial conflict. The narrative judiciously balances elements of a moody human drama with horror tropes to deliver a riveting and captivating visual delight. Sadasivan recently spoke to me about his creative choices for Bhoothakaalam.

Dipankar Sarkar: Tell me about your background and how you got involved in the world of filmmaking?

Rahul Sadasivan: I studied filmmaking at the London Film Academy. Right after that, I directed my first film Red Rain (2013). After that, I have been writing scripts and meeting people. Finally, I got the opportunity to make my second film Bhoothakaalam.

DS:  How did you get the idea for Bhoothakaalam?

RS: I got this idea because I like the horror and suspense genre. I would like to explore more [in] this genre. Through my films, I want to try different narrative styles and tell a ghost story without showing a ghost. With Bhoothakaalam, I have tried a different template that has never been shown before in our film industry. There has been a definite narrative structure and pattern used in our cinema that viewers have gotten used to. So, I tried to take a fresh approach for my sophomore [feature], and that is how the idea for the film took its shape.

DS: How did you map the narrative structure of Bhoothakaalam?

RS: The first half of the film is all about balancing those silent moments. The aim was to drift from the genre of a family drama to horror. I wanted to play with this deception and confuse the audience. The first act of the film is a slow burn drama. After the demise of the grandmother, things change inside the house. The behavior of the mother and son changes too and that sets them on a different course in their lives. So, I kept the pace of my film in a way where the camera rarely moves. It is mostly static, as I have tried to focus on the atmosphere. In the second act, I moved towards the emotional state of the characters, where they become helpless and isolated. Slowly, it starts to affect their social life. At one point, it becomes a social stigma, and they resolve it at the end. The narrative structure is set in a way that is a slow burn. 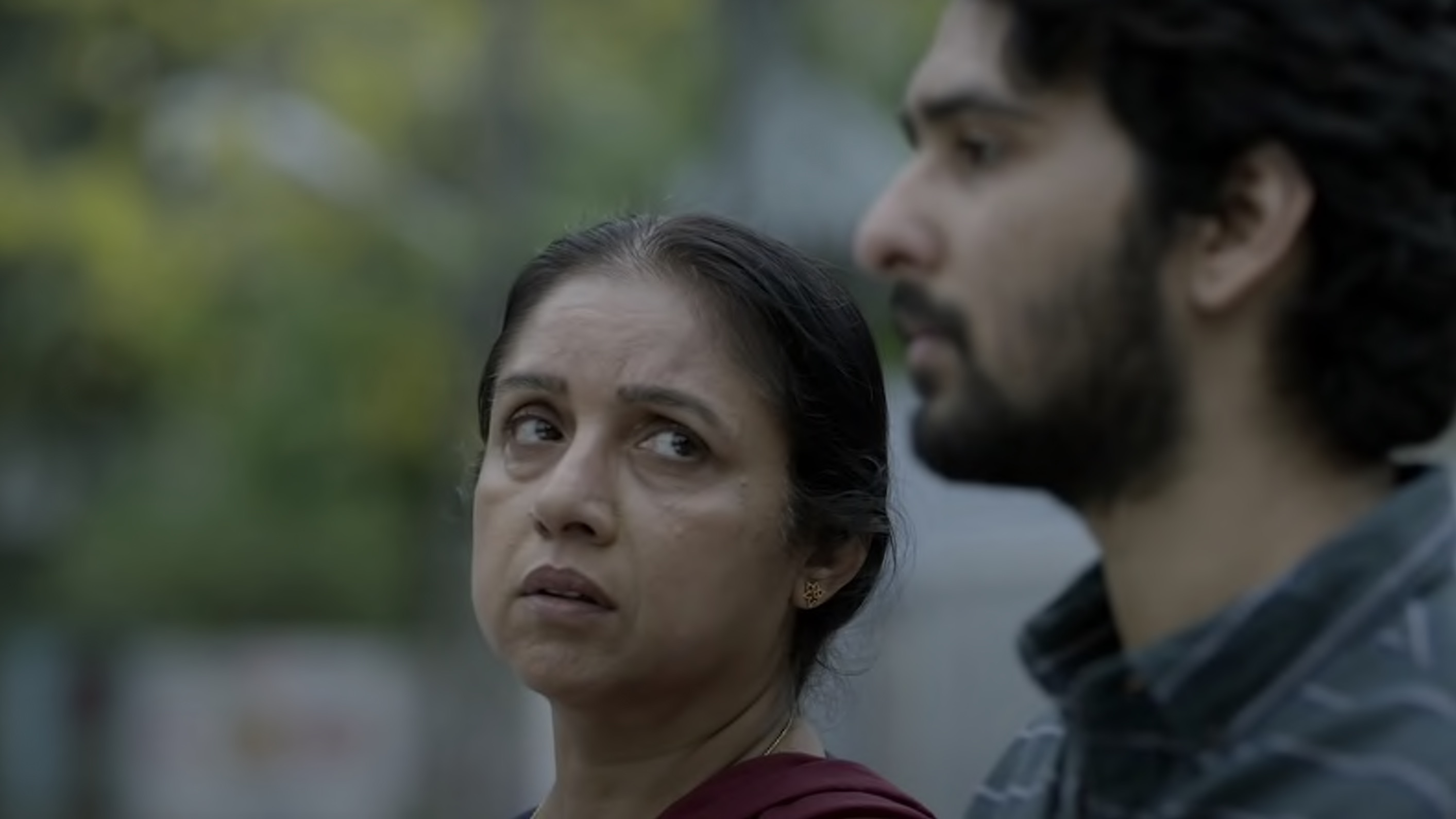 DS: From the beginning of Bhoothakaalam, were you trying to subvert the audience’s genre expectations?

RS: Yes, I showed the grandmother initially to trigger something in their life so that there is confusion throughout the first half of the film. The audience will think that all the strange things happening within the house are due to the death of the grandmother. I wanted that confusion to happen, and that is why the first shot of the film creates that mood and atmosphere for the film. It is only during the third act that things start to change.

DS: Did you use the ailment of psychological distress as means to portray the lack of connection between the duo in Bhoothakaalam?

RS: I tried to portray mental illness because, as I said before, I wanted to create confusion. I thought that the easiest way to tell a horror story would be something to do with psychological issues. Moreover, clinical depression and addiction are used in the film to create a backstory for the characters. I portrayed this in a very simplistic and minimalistic manner. It is used as an underlying factor just to drive the story forward and play with deception a lot, so that the audience will think that all this confusion and hallucinating are either happening in their head or there is a problem within the house itself. Or is it the spirit of the grandmother that is creating all these problems? At the same time, the family also had a history of mental disorders and they were scarred for life. Creating such moments of confusion, I was able to stretch the tension further towards the climax. 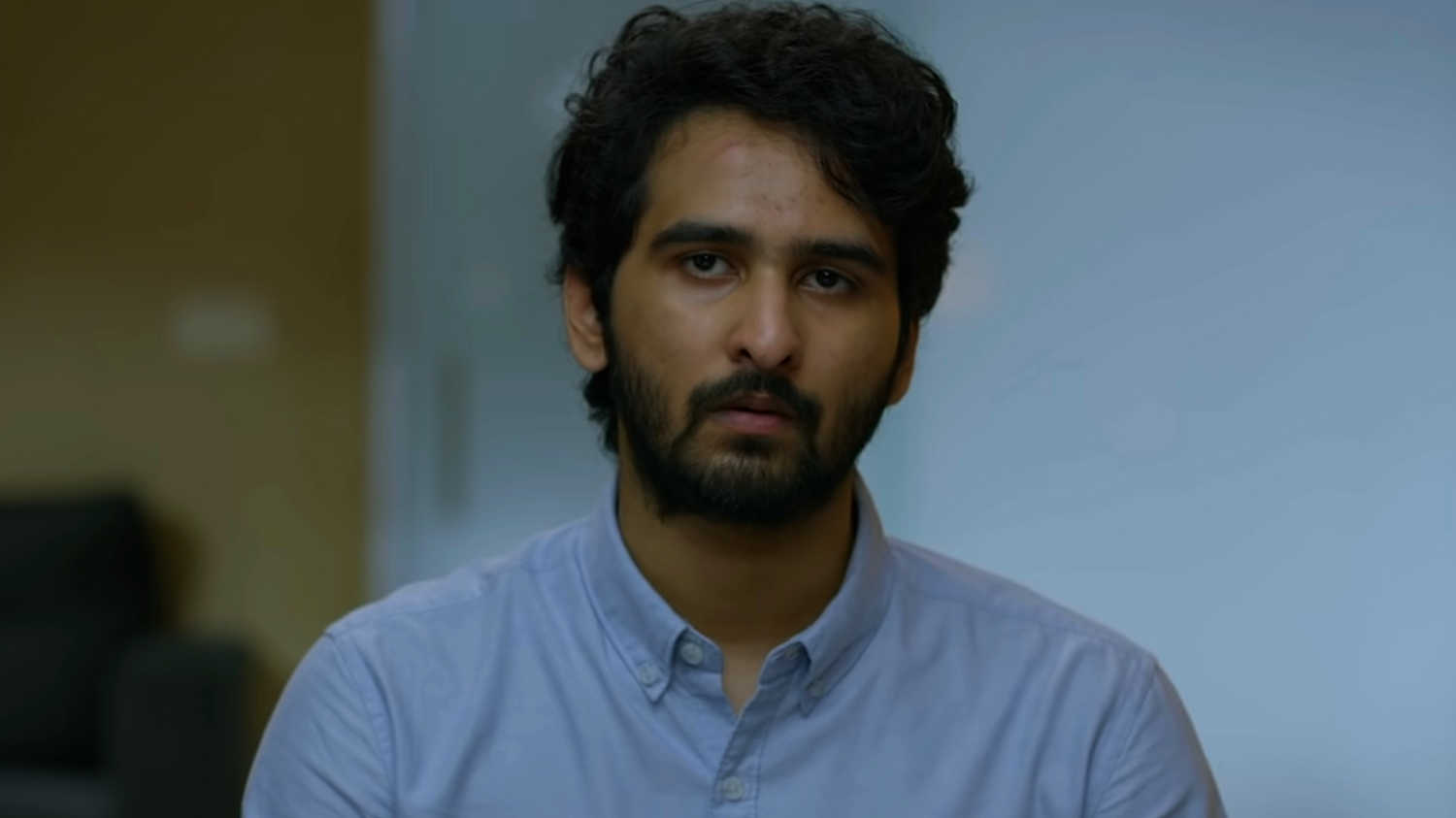 RS: In the final 15 minutes of the film, I had to explore everything that I had got because initially the film is set at a different pace. But towards the end, when the conflicts between the characters are resolved, I had to bring out the real adversary. The audience also needed an answer they had been looking for. So, I had to bring more tense and scary moments, and I tried to achieve it without the use of VFX or any gore and explicit images. I wanted to keep it very minimal. Even if I am showing [something] on the screen, I wanted the viewers to have a connection with the characters and the house in context to the story. Though I was telling a fictional story, I wanted to have a feel of realism. Thereby my approach was simple so that the audiences can get into the shoes of the character and see and feel just like them.

DS: How does the romantic relationship between Vishu and Priya (Athira Patel) within Bhoothakaalam move the story forward?

RS: I never wanted other characters to come into focus so that the attention of the viewers from the central character is shifted. So, I kept the romantic relationship between Vishu and Priya just for a cooling point in the film. Whenever Vishnu is with Priya, that is the only time when he is laughing, smiling and having a good moment. Apart from those small moments shared with Priya, every other moment is a turmoil for him, as he is going through a tough time. So, I kept their relationship subtle, and it was a deliberate choice.

DS: How did you plan the overall visual design of Bhoothakaalam with your cinematographer Shehnad Jalal?

RS: We spent a lot of time in pre-production before shooting the film. In the second half of the film, the house itself becomes the character. It is a small space with three bedrooms and has to look simple like a next-door house. I have to keep a minimalistic approach because there are no dramatic dialogues in the film. At the same time, I had to play around with the space and perspective of the house. For that reason, I had to storyboard and discuss a lot of things with my cinematographer — like how to make a shot division without being very repetitive. Both of us had a lot of time to plan during the pre-production stage once the location was locked. Right after that, we had to choreograph the characters’ movement and [decide] how to tell an affecting story within the limited space.

DS: Some of the Bhoothakaalam shots are composed in such a way that it leaves a certain portion of the frame empty to arouse our expectations. But again, nothing scary happens. So, how did the idea for such compositions come to your mind?

RS: Some of the shots are kept static and empty to set the mood and atmosphere of the film. At the same time, it also becomes one of the perspectives of the film. The entire film is told through two perspectives: the mother and the son. But there is also a third perspective, which is the audience’s perspective. So, when the characters are sleeping inside the house, we as an audience are looking at the things inside the house from a different perspective through the static and silent frames. Through such compositions as a filmmaker, I want my viewers to see the film in a certain way that shows how the genre of the film is shifting from a normal drama into horror mode. It has a very slow transition and a slow build-up to tell a narrative. 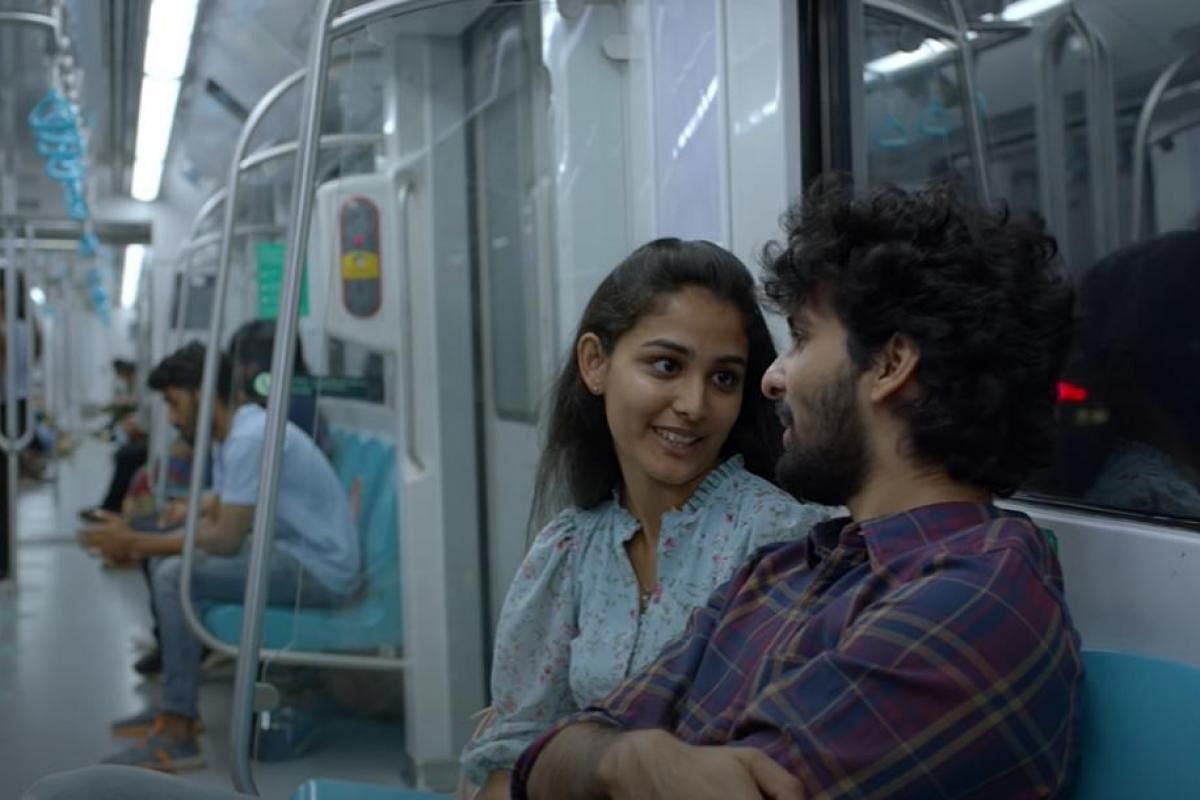 DS: Bhoothakaalam has a brisk pace and preciseness that helps in creating a smooth rhythm. Could you comment on the editing pattern you had in your mind while shaping the film?

RS: I had an idea of the edit during the pre-production. During the shooting of the film, I captured lengthy shots. In the post-production stage, we figured out how much balance has to be there in some of the shots to bring out those moments of subtlety and fear. I had written down in the screenplay itself about how the template and the narrative structure of the film should be.

DS: The background score in Bhoothakaalam elevates the shock value and scare quotients on a purely visceral level. What was your brief to the musician Gopi Sundar?

RS: Once I had the first cut of the film, I showed it to the music director of the film, Gopi Sundar, and he said that there is a very limited scope for background score. The film is structured in such a pattern that it can survive without a background score. Even I had the same idea in my mind. I wanted to keep music in the film as minimal as possible. I did not want loud sounds or music to evoke fear. The first half of the film is balanced with silent moments. It is only towards the final moments in the film that there are some tense moments. There is no particular theme music for any of the characters. However, there is a general theme in the film that supports the general idea of the film. So, the score helped in strengthening the central idea of the film.

DS: What are the influences that helped you in shaping your cinematic sensibilities?

RS: My main influence came through my exposure to western and European films as well as some of the books that belong to the mystery and horror genre, like Stephen King amongst others. I am always toying with this idea of telling a horror story in our industry that [has] never [been] told before.

DS: Do you regret that Bhoothakaalam could not be released theatrically?

RS:  No, I do not regret not having a theatrical release. I agree that a theatre release would have given me a very different experience. But I am happy that we have tied up with SonyLIV and that [the platform] gave the viewers a different sort of experience altogether. People watched the film at night with good quality headphones [while] expecting a psychological drama. But then it turned out to be a horror film. That was a very unique experience for those who watched it for the first time. Moreover, since the film is released on an OTT platform, it is discussed [throughout] India and there have been some overwhelming responses all around. So, we are quite happy.