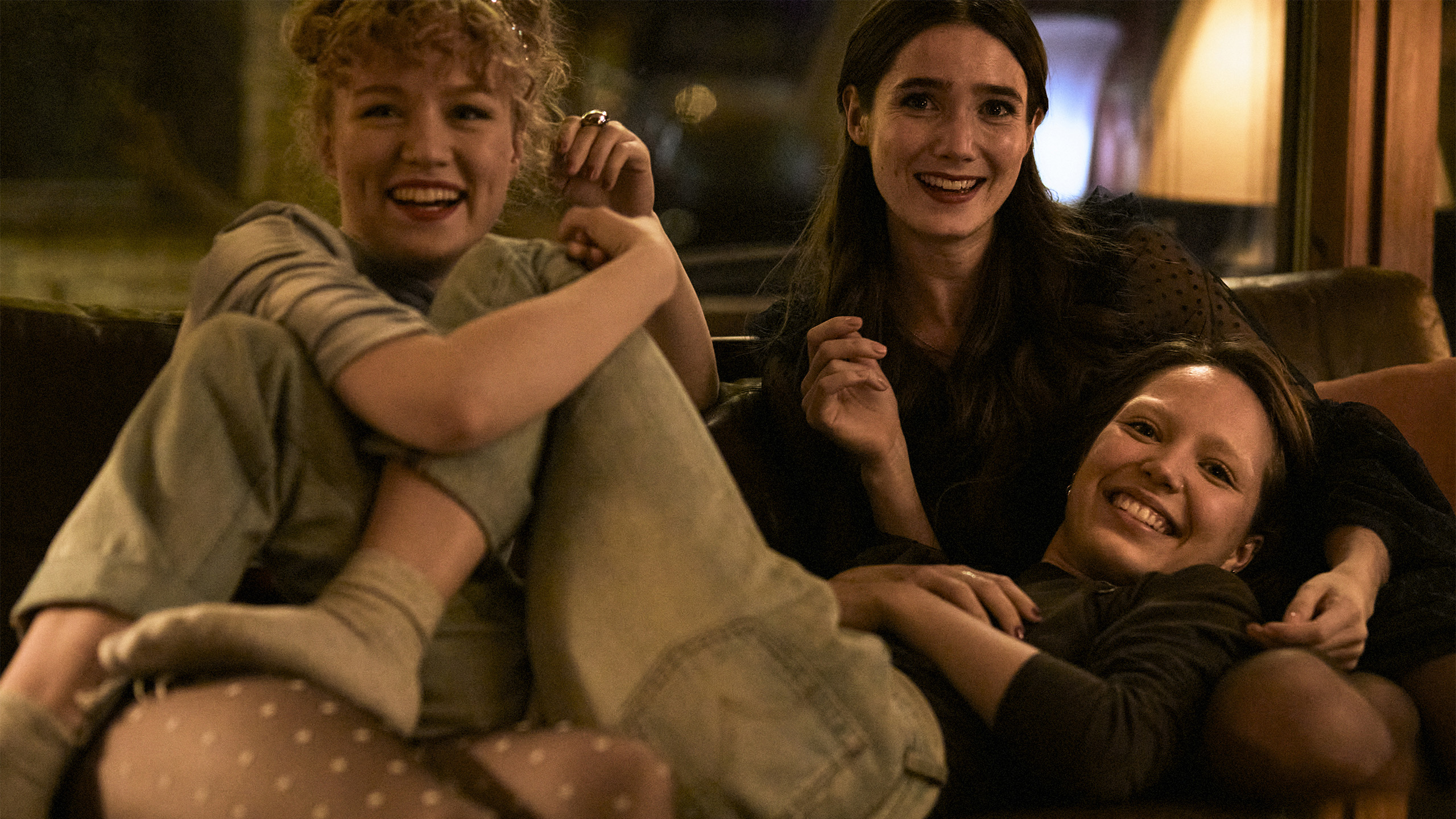 It’s not a film festival without a screening or two that takes you by surprise, one that becomes an unexpected delight. And for Sundance 2022, that’s Girl Picture by Finnish director Alli Haapasalo, winner of the festival’s Audience Award for the World Dramatic Competition. The film dwells in triplets (the original Finnish title is Tytöt tytöt tytöt, which endearingly translates to Girls girls girls), taking place over (roughly) three Fridays. Set to a bouncing electropop soundtrack and filled with plenty of adolescent antics (namely drinking, dancing and dating), Girl Picture explores the lives of three teenage girls: the energetic and curious Rönkkö (Eleonora Kauhanen), her edgy and passionate best friend Mimmi (Aamu Milonoff) and the quiet and emotional figure skater Emma (Linnea Leino).

While Mimmi and Emma embark on a youthfully passionate romance after a night on the town, Rönkkö embarks on a journey to figure out why she’s simply just not that into sex, at no loss for boys who are just as eager as she is to get it on at a party. These dual intertwined explorations of sexuality cross over almost exclusively during Mimmi and Rönkkö’s shift at a shopping mall smoothie shop and passing parties that act as narrative bookends, leaving more to be desired by way of moments between the two friends. Yet the seemingly mundane smoothie shop encounters are filled with teenagers sputtering out their orders, with painfully punny English names like “It Takes Two to Mango,” utterances that perfectly encapsulate the awkwardness of the age.

As Rönkkö, Kauhanen shines in her first onscreen role, and Milonoff complements her well as the intense one of the trio, their onscreen friendship chemistry grounding the film. But as the shy and naïve figure skater Emma, Leino becomes the breakout star of the three. As she gracefully glides and spins — and falls — her way across the ice (despite training for a mere three months for the role) for what’s shown as the European figure skating championships, it’s satisfyingly evident that Haapasalo is pulling off no I, Tonya face replacement.

A film about female adolescence with a trio of leads leads to a natural comparison to Céline Sciamma’s 2007 feature debut Water Lilies (Naissance des pieuvres), which also features a love triangle between three high school girls, with one character exclusively interested in boys and the other two in a relationship of considerable complexity. However, the implications of the similarities between the films strike deeper. In both, the characters don’t come of age as much as they “grow sideways,” or mature in a nonlinear progression that defies conventions of cisheteronormative adolescence. Boys and adults are all but throwaway characters in both films, creating the background circumstances for Emma’s anxious obsession over figure skating achievement — fueled by her close and honest friendship with her mother, who also keeps a close eye on all her activities — and Mimmi’s fears of abandonment — fueled by her mother’s considerable absence as she attends to her much younger half-brother.

Calling Girl Picture a queer coming-of-age film would arguably be a misnomer, or at least an oversimplification — and not just because Rönkkö’s sole romantic and sexual interest is men (at one point, she glumly tells Mimmi that she is “unfortunately, totally heterosexual”). Here, the girls have more or less “come of age” already and grapple with far more nuanced struggles in comparison to the classic coming-of-age trajectories characters in other films of a similar texture, especially American films about queer adolescence. What makes so many of today’s coming-of-age films unwatchable is their incessant pursuit of stories centered around what could be coined as an achievement-based romantic narrative (guy gets girl, girl gets girl, etc.) and, of course, coming out stories centered around shame and acceptance. Girl Picture more or less avoids falling into these traps: There are no coming out speeches or an overemphasis on first times; Mimmi and Emma are together almost immediately, and Rönkkö couldn’t care less about finding a boyfriend — just a good lay.

Mimmi confronts her noncommittal behavior patterns that she repeats from her mother’s absence, Emma learns that she is worthy of achieving balance in her life and, perhaps most notably, Rönkko learns to accept that she is still in the process of understanding her body and her sexuality. As she eagerly describes to Mimmi her attraction to male peers and her excitement to engage sexually, she grows disappointed over her inability to enjoy sex to the extent that everyone seems to describe it. In Girl Picture, even someone with a seemingly heteronormative trajectory begins to deviate from conventions of it. While it’s unclear whether Rönkkö’s narrative is intended to be a depiction of asexuality —  queer audiences may be so starved for stories about asexuality that projecting onto Rönkkö’s narrative feels inevitable — the wonderful thing about Girl Picture is indeed the ambiguous final act storytelling; a refreshing change of pace.

The juxtaposition of the two narratives carefully illustrates differences in the stories, making Girl Picture a cinematic case study of a pseudo-glocalization of adolescent stories — an example of something specific yet also universal in its depiction of growing up. While Mimmi and Emma’s story is lush and filled with dancing, morning sex (“I love that I can give you pleasure,” Mimmi murmurs to Emma) and unbridled outbursts of emotion, Rönkkö’s story is punctuated by quick, lustful encounters that are confounded by the pursuit of her own pleasure, something that — God forbid — has now taken a front seat in her life. Mimmi implores Rönkkö to tell her sexual partners what she wants, but, for instance, a potential partner turns south when he — a wealthy fur-clad boy named Sipi (Amos Brotherus) who invites other popular kids to his mountain chalet for an all-out annual party — describes Rönkkö using her words (“having a manual for your genitals”) as a turn-off, to her complete dismay.

Emma and Mimmi, on the other hand, deal with competing interests when the former begins to skip crucial skating practice in favor of their burgeoning relationship, the passion of which excites her in new ways, and the latter begins to grow aloof and detached from their closeness, mimicking her mother’s behavior. While Rönkkö is granted several sequences to explore her story, Emma and Mimmi’s story is forced to undergo duress and becomes resolved relatively quickly over the three-week timespan. Mimmi, in particular, is short-changed with just a sprinkling of her familial circumstances explored before she gruffly abandons Emma at a club and proceeds to embark on a sexual encounter with a man as Emma, miserable, is forced to listen from downstairs.

Girl Picture’s only major timeline benchmark is that of Emma’s major figure skating competition, marking the final Friday, which makes the attempt to fit the film into perfect threes feel like an unnecessary framing device. Written by Ilona Ahti and Daniela Hakulinen, Girl Picture stays narratively afloat on its own without the connective tissue dictated to the viewer by lower third titles (“First Friday,” “Second Friday” and so on). Its ambitious attempt to cover so much ground feels limited by its 100-minute runtime. Nonetheless, the lighthearted slice-of-life storytelling in Girl Picture gives viewers a healthy sampling of what Haapasalo has to offer and, ultimately, a fulfilling and effervescent exploration of teenage sexuality.

Olivia Popp (@itsoliviapopp) is a film, television and culture writer with a particular interest in stories about suburbia, queer socialization, Asian America and speculative worlds.