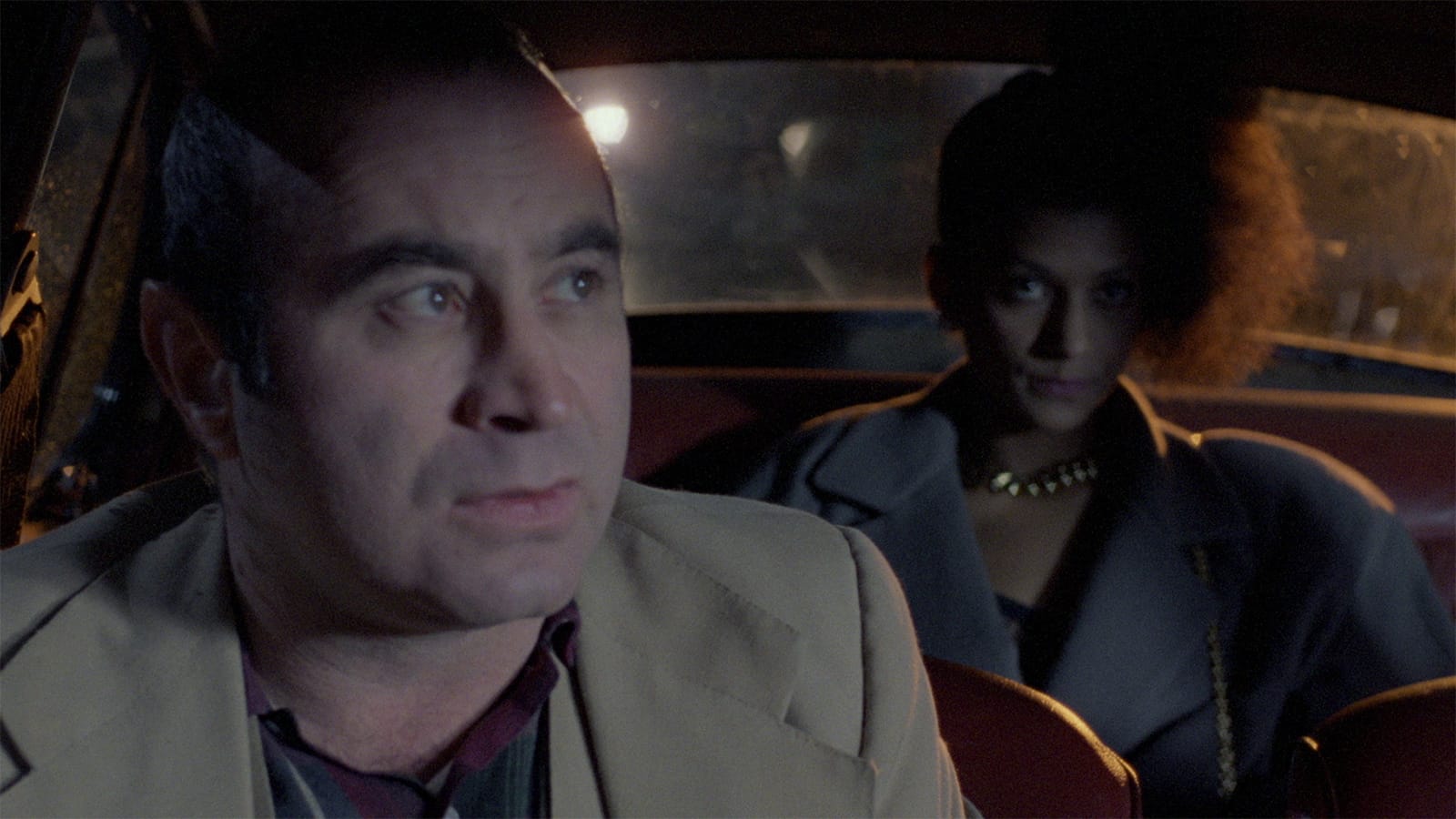 Are you happy? This existential question has plagued mankind’s psyche since the beginning of time. In Neil Jordan’s Mona Lisa (1986), the same inquiry haunts and taunts the characters, most notably George (Bob Hoskins), the neo-noir misfit of the film to whom fate has not afforded many opportunities to find happiness. Upon his release from prison, George encounters rejection by his wife (Pauline Melville) and a reluctant welcome by his daughter (Zoë Nathenson). A happy-go-lucky buddy, Thomas (Robbie Coltrane), is George’s only reliable friend. Reverting to the underworld, George turns to crime boss, Denny Mortwell (Michael Caine), for employment and some purpose in life. He accepts the assignment of chauffeur/bodyguard for Simone (Cathy Tyson), an upscale lady of the night. These two initially irritate each other, and then find themselves serving as mutual sources of comfort and companionship, concluding that they need each other. George’s feelings for and devotion to Simone escalate to the point that he endangers himself for the woman and her associates, risking far more than he realistically has to gain.

What begins as an odd couple pairing of the short, bald, chubby, middle-aged white man and the elegant, tall, Black beauty takes on the air of a fairy tale romance. George is the white knight, ready to serve his ladyship without reservation. In addition to driving Simone to her clients, George tracks down the imperiled Cathy (Kate Hardie), a friend and former colleague of his love interest. Cathy is a teen prostitute who is the tortured subject of men’s fantasies. All is not what it seems, however, as George soon finds himself stumbling down an insidious rabbit hole; one that puts him at odds with his boss and reveals unwelcome truths about Simone. 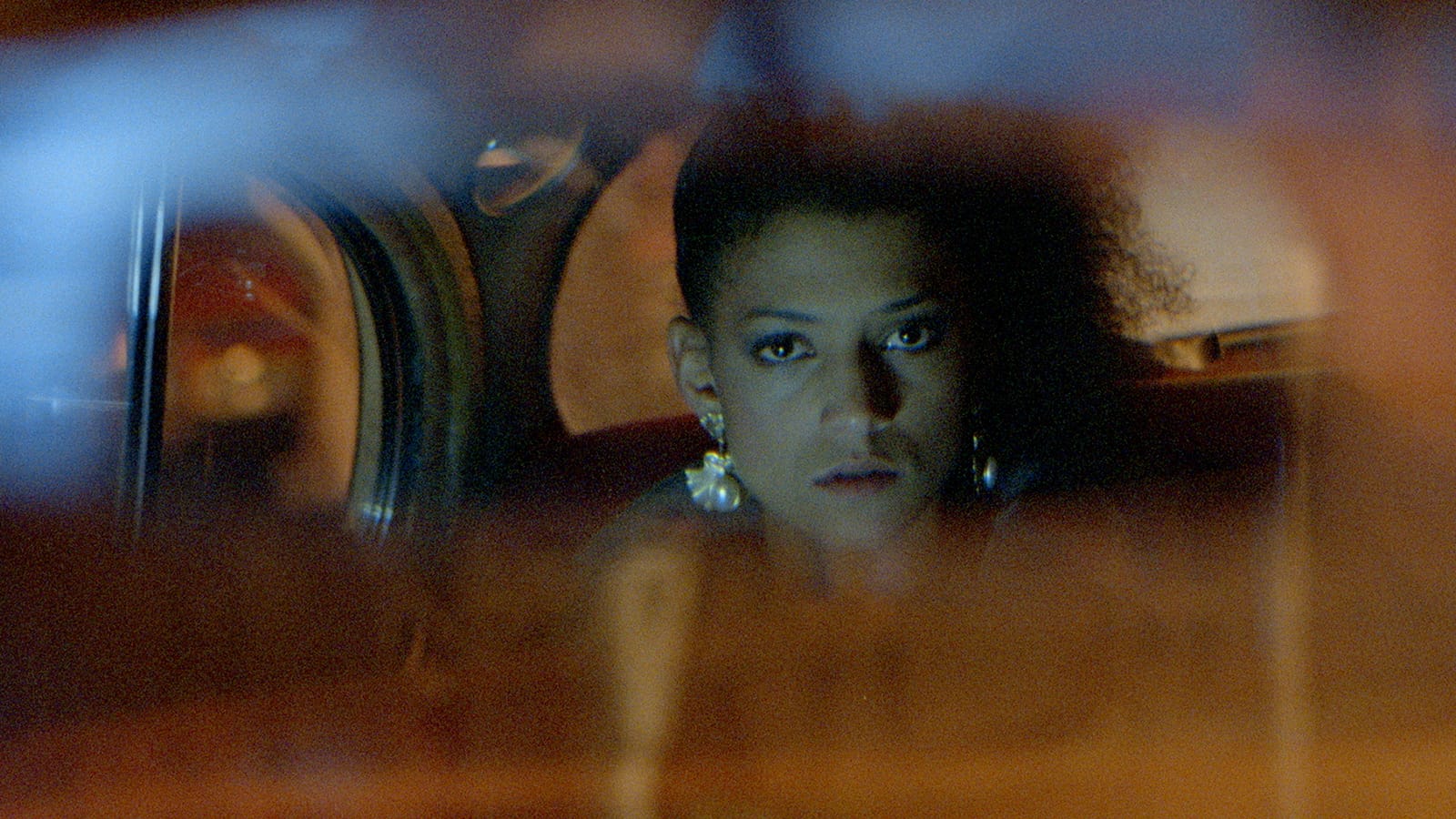 Hounding everyone he meets with the energy of a pit-bull, and vacillating with the vulnerability of a teddy bear, George is a dead ringer for a modern-day Edward G. Robinson, noir’s original victim of circumstance. There are many parallels between Hoskins’ character and Christopher Cross in Fritz Lang’s Scarlet Street (1945), as these average guys of low social tier become puppets of “working” women who are out of their league. It’s quite fitting that Scarlet Street ends as Mona Lisa begins with the reluctant hero sitting alone on a park bench. It’s almost as if Hoskins picks up where Robinson leaves off. George, however, proves to be more fortunate than Christopher, as his self-victimization ends by the conclusion of Mona Lisa.

Throughout Mona Lisa, Simone is both a victim and a manipulator. Tyson executes the role well with the signature mystic smile and stoicism of the subject in Leonardo Da Vinci’s eponymous 1503 painting. As the story unfolds, character reactions to Simone vacillate between shame, admiration, fondness, pity, surprise and disdain. Tyson’s character briefly appears fun and playful as she shops with George and buys him a respectable wardrobe, as he is worthy of the luxurious hotels and residences she frequents. The encounter is as endearing as that of Edward Lewis (Richard Gere) purchasing new clothes for Vivian Ward (Julia Roberts) in Pretty Woman (1990). In some ways, George may be Simone’s avatar. He refers to the woman as a bird trapped in a cage. Simone is not only trapped in a disreputable profession, she is also confined within a concealed sexuality. By emphasizing Simone’s imprisonment, Jordan alludes to the plight of the female outcasts of 1950s British cinema,  the “Twilight Women” popularized by J. Lee Thompson. Mona Lisa’s woman of the night is cold and lonely in her profession, and it literally brings her no satisfaction. 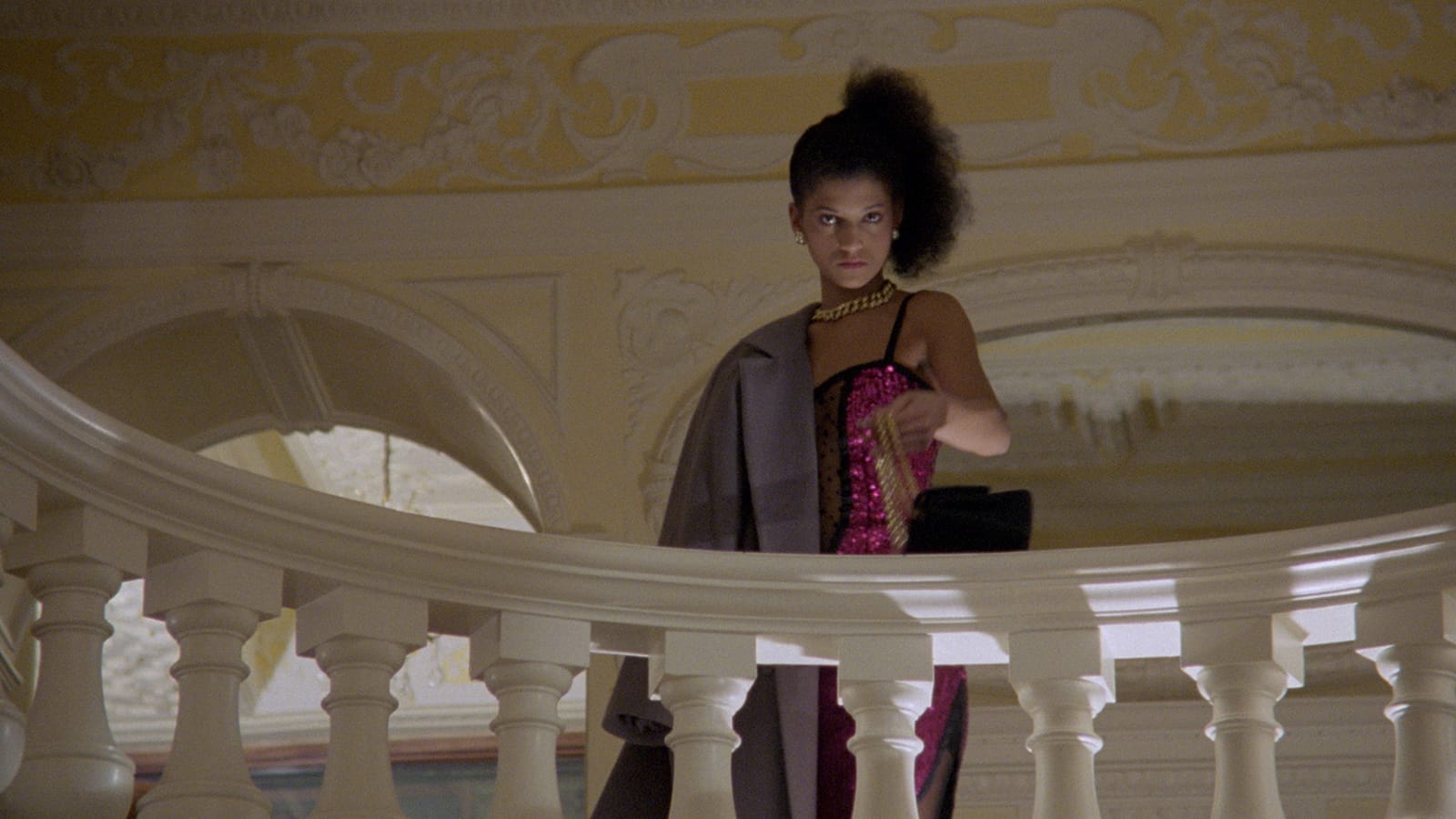 Other villains of Mona Lisa include Anderson (Clarke Peters), a stereotypical pimp, who is a violent and demonic woman-beater. He is like a scary monster, appearing out of nowhere, with a maniacal laugh. May (Sammi Davis), a gutter level prostitute of King’s Cross, is one of the most intriguing characters. Her appearance in the film also enhances its fairy tale essence. She looks and acts like a Celtic banshee, popping in and vanishing. May proves to be another dual victim and victimizer, one with an evil streak.

With this colorful cast of characters, Mona Lisa is not a standard crime caper. It’s a slightly more upbeat version and melodramatic version of Get Carter (1971). While both films tell the tale of ex-cons with estranged family ties, ill-tempered manners and a panache for saying whatever might be on their minds, Mona Lisa diverges into fantasy. Cinematographer Roger Pratt employs excellent lighting effects to turn the mundane into otherworldly, while Louise Frogley’s costumes are the right balance of practical and fantastical, enabling Jordan’s poetic vision to come to life. 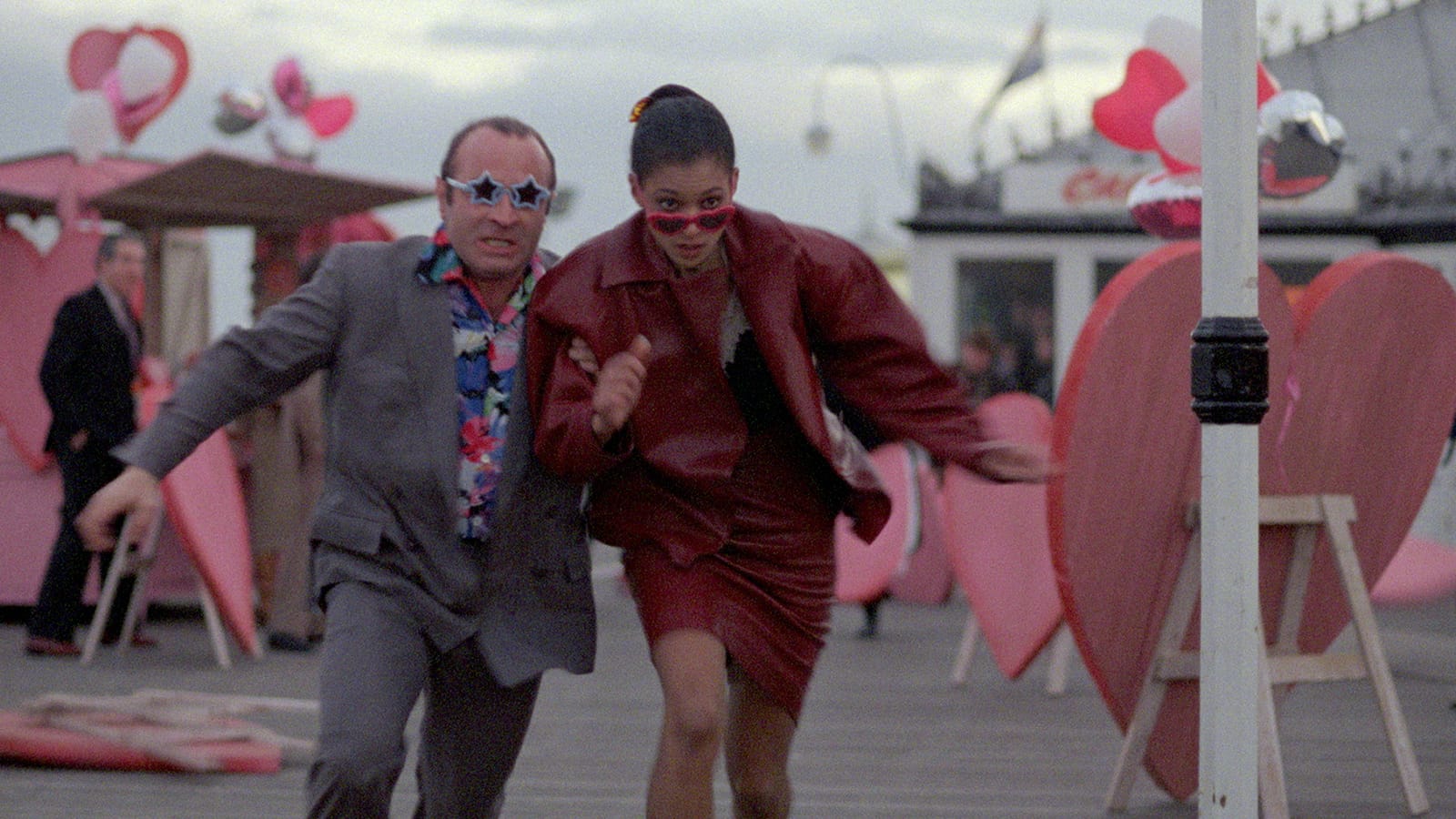 The fantasy-like structure of Mona Lisa is typical of the romanticism period in British cinema. From the outset, even the introductory credits have a fairy tale essence. Thomas rhythmically walks on a bridge to the sound of Nat King Cole’s “Mona Lisa,” the unofficial melancholic lullaby of this tale, followed by the surrealistic image of George sitting on a park bench. Even the trash whimsically floats across the street as George returns to his neighborhood. On the darker side, Pratt’s technical expertise prevails in the King’s Cross night scenes. Rather than appearing cheap and tardy, George’s chauffeuring of Simone through the “meat rack” has a tranquil and pristine glow to it, evoking a hypnotic dream state.

George’s journey could be a chapter out of Alice’s Adventures in Wonderland. As soon as he and Thomas arrive at Mortwell’s pub, the camera pans to the entrance and takes on a shallow depth of field, suggesting that Hoskins’ character is about to embark down a dangerous path into world. Adding further to the illusion of Alice’s Adventures in Wonderland, George has in hand a white rabbit, to be given to Mortwell as a gift. In his quest to find Cathy, George goes down a flight of stairs marked “Tunnel Love,” but all that awaits him is a labyrinth of vice and perversion, filled with cracked mirrors, emitting a sense of other worldliness and deceptions. 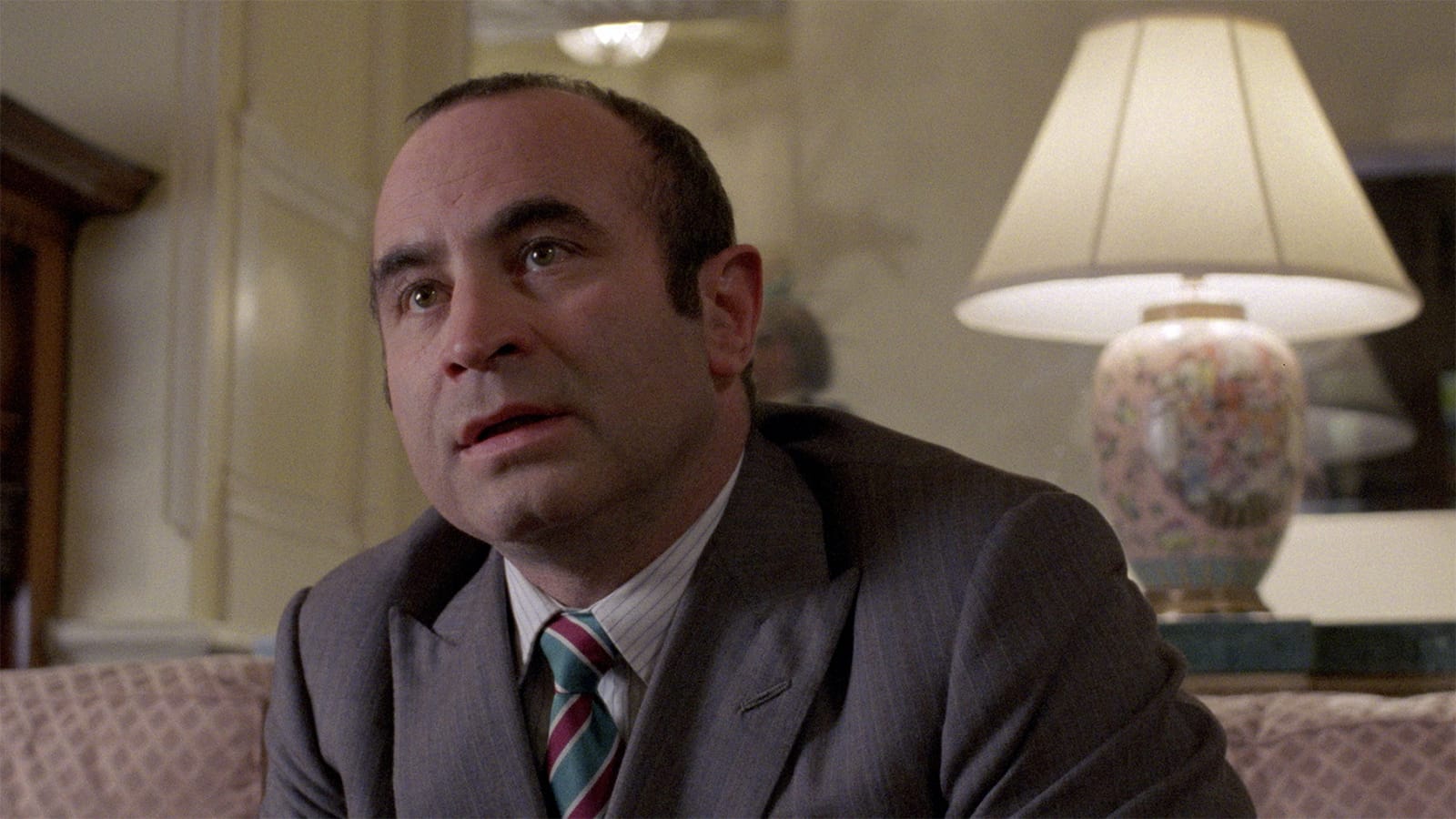 The looking glass element is at play throughout Mona Lisa. When George rescues Cathy, he literally pokes his head and arm out of a trick two-way mirror and rescues her from further humiliation and pain perpetrated by her “gentleman” client. When Anderson runs after Simone and George on the Brighton rock pier, it looks like he is coming straight at them from the other side of the mirror. The pace and tempo of the music becomes operatic and whacky as George and Simone are chased by Anderson and his goons. Giant cardboard hearts emerge scattered about, an allusion to the Queen of Hearts from Alice’s Adventures in Wonderland. In the finale, Simone and George climb the long towering hotel stairwell, only to find the devious Mortwell waiting alongside Cathy’s bedside as she tussles and turns from a nightmare. Through strategic positioning of the camera, it appears that Mortwell is coming through the mirror and coming to bring Cathy back to his warped version of reality. As soon as Mortwell and Anderson are killed by Simone, Cathy wakes up screaming, indicating that the nightmare is finally over.

Mona Lisa was ahead of its time, a precursor of urban fairy tales in late 90s British cinema. As defined by Robert Murphy, character archetypes of urban fairy tales generally include discontented princesses, unproven heroes, put-on Cinderellas, witches and scary antagonists. George is Mona Lisa’s unproven hero, one who must reflect upon his own self-image and take the required steps to grow from immaturity to maturity. In the beginning, his childish and rude mannerisms prove to be a thorn in everyone’s side, including his own. However, it is through the urgency of wanting to reunite with his daughter and his put-upon Cinderella that George assumes a hero’s journey. 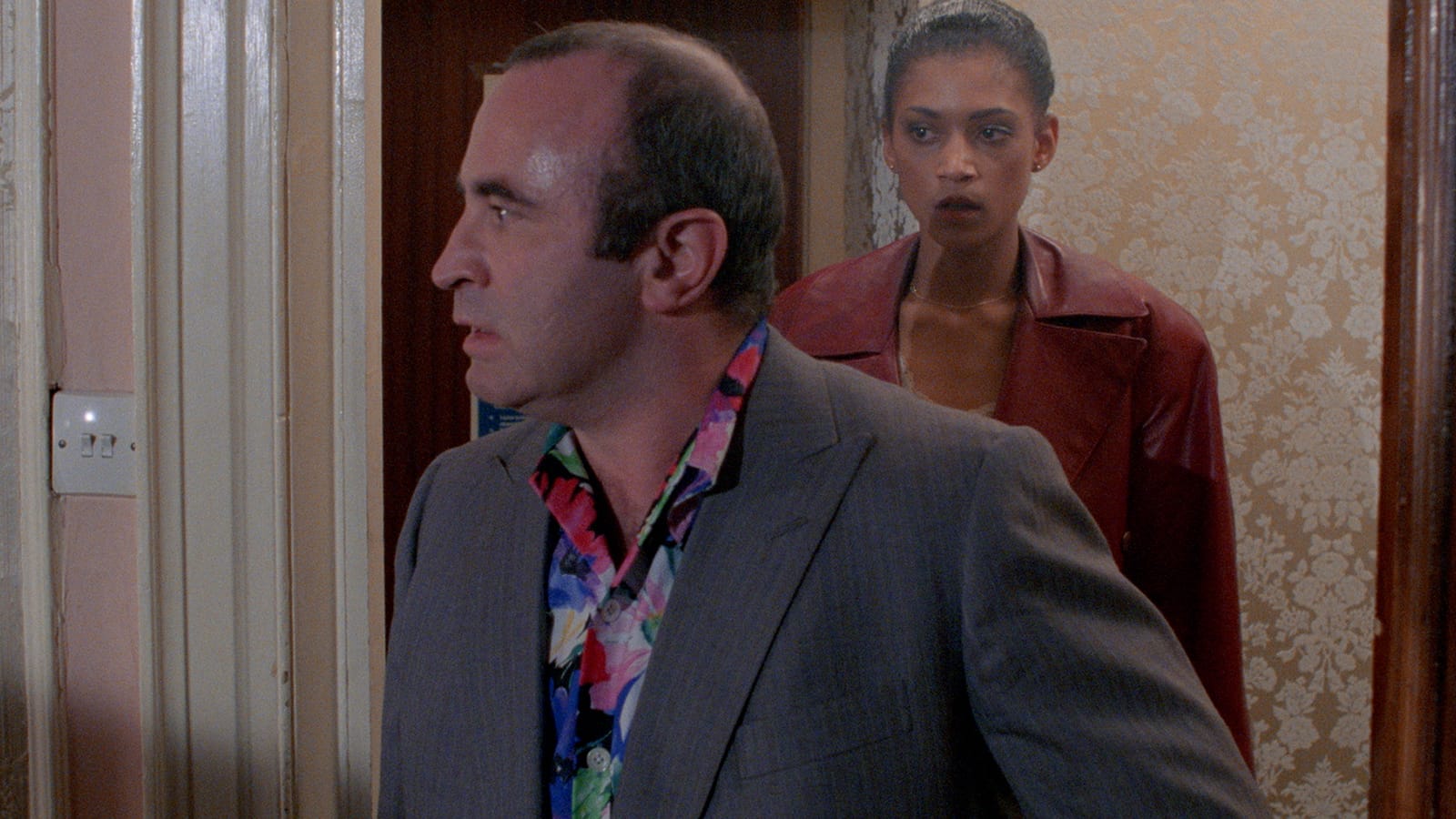 Upon Mona Lisa’s climatic resolution, George is finally forced to admit that his attempts to court Simone, his dream girl, and live a life of exotic adventures are simply an illusion. Whatever promises of happiness that he thinks Simone can give him prove to be just as illusive and ambiguous as the subject of the actual “Mona Lisa” painting. Ultimately, the trivialities to which Mortwell and his ilk aspire — sensationalized pleasure and instant gratification — do not truly satisfy. The happiness that George achieves comes from the real little things, including family and friends and taking idyllic walks in the park.