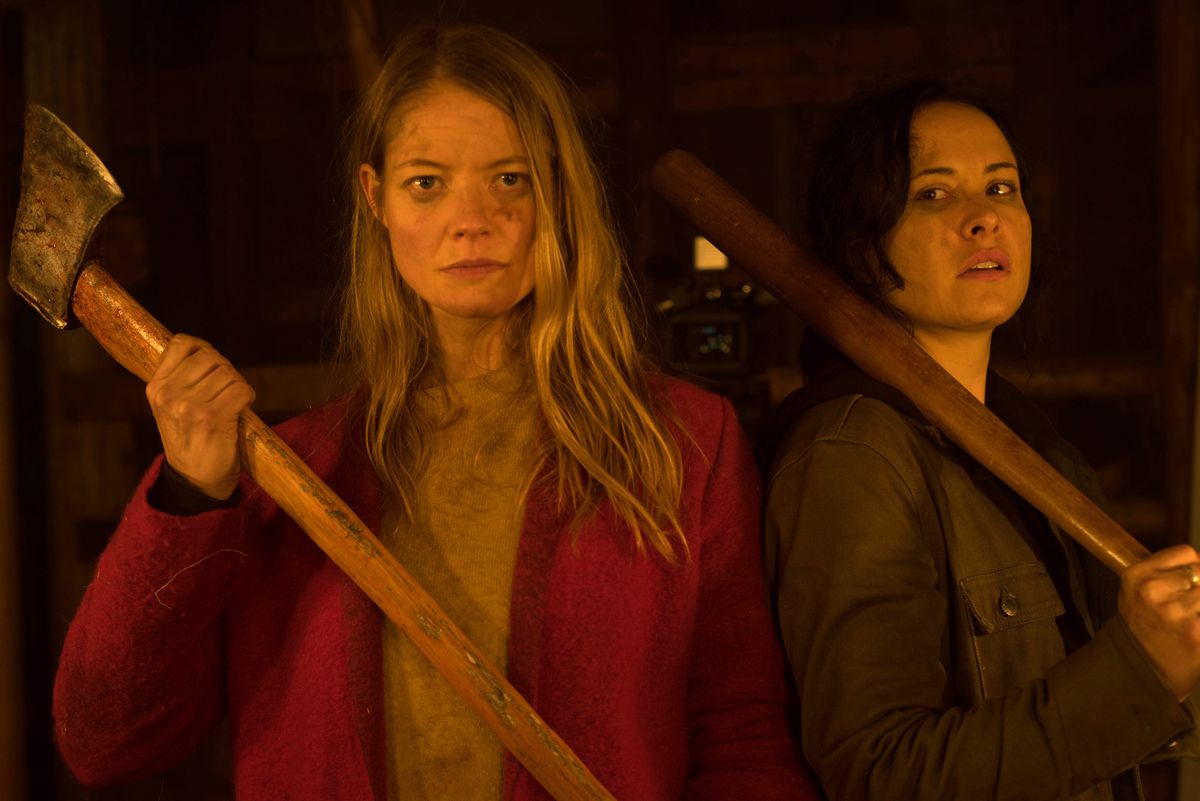 The “bury your gays” trope is an ugly one that knocks the wind out of any LGBTQ representation by dispatching its marginalized characters almost as soon as it introduces them. It’s a trope that has endured in the horror genre like the killer that just won’t stay gone. The Retreat counterpunches the trope within the structure of backwoods survival horror, dropping its lesbian leads into a forced good vs. evil battle which ensues over the course of one deadly night.

Screenwriter Alyson Richards and director Pat Mills tell a story that shares a kinship with Jeremy Saulnier’s nail-biting thriller Green Room, whose subjects also walk into a lion’s den and must claw their way out, pursued by the sort of assailants that don’t respond to an open dialogue. Unlike the 2015 film, however, the women of The Retreat do not witness a murder nor are they chased by neo-Nazi skinheads. Instead, they fall into a trap set up by the skinheads’ camo-wearing cousins. Renee (Tommie-Amber Pirie) and Valerie (Sarah Allen) arrive at an Airbnb rental for a getaway, only to find that the couple they were supposed to meet there has vanished. There aren’t many red flags, and the very moment they realize that they are being watched, the couple snatch up their picnic gear and jog towards the cabin to leave — alas, the car is gone and now they are unwilling subjects in a most dangerous game. 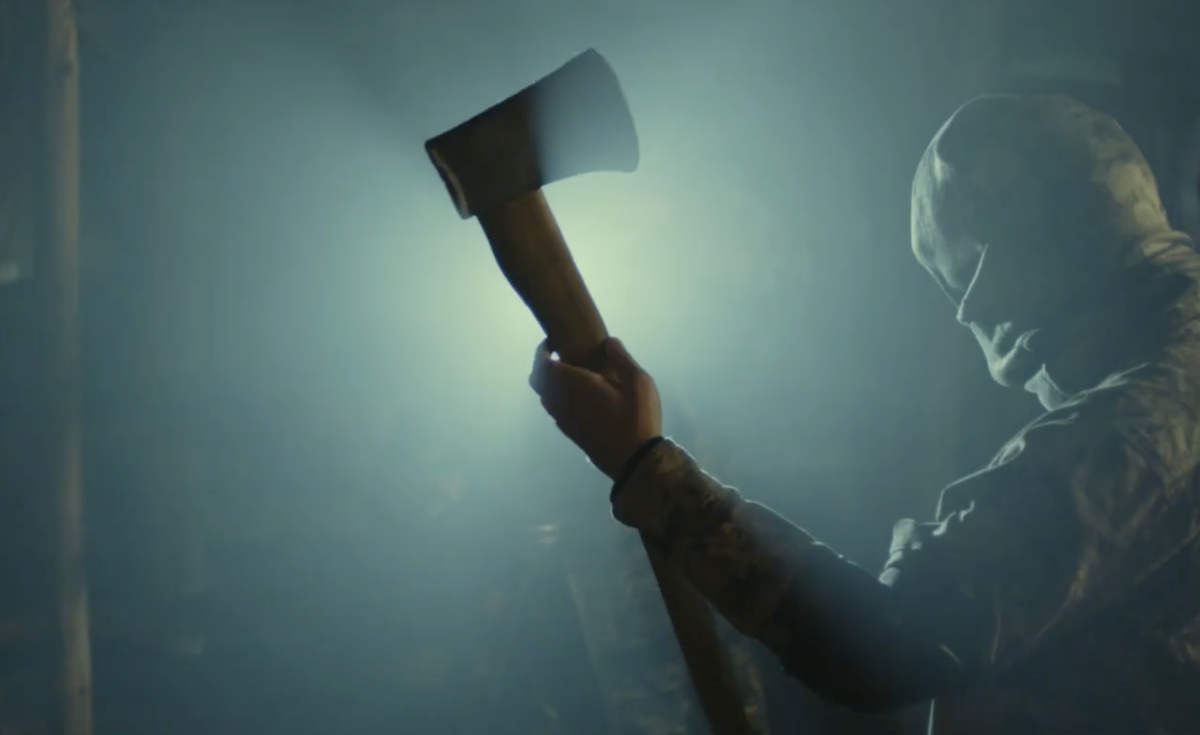 It takes an average amount of time to get to the thrills, and Richards uses the first act for some character development before the steel bear traps and shotguns show up. Renee is a poor communicator, but she’s present for her girlfriend when needed. The emphasis on their connection issues gives the impression that they’ll need to communicate when fighting for their life, but they don’t, at least no more than any other tormented pair might. The “battle” is largely comprised of one partner recklessly putting themselves in danger, and the other saving their skin at the last second (twice!). The tail end of that arc is flat for both characters, but their respective actors put on harrowing, distinctive performances throughout that, regardless, make the ride worthwhile. Pirie and Allen counterbalance each other with ease. Pirie’s intensity stays appropriate to the plot at hand, from tight-lipped discomfort at relationship talk to willing herself into cocking a shotgun with the feigned fake-it-till-you-make-it force of someone thrust into a confrontation they did not ask for. Allen displays a subtle comfort with discomfort that shines through in her daintier role — when she is called upon to pick up a weapon, Allen’s doe-eyed gaze turns to adrenaline-tinged ice with reasonable authenticity. The pair are at their best when they share the frame, and so when the latter half of the story keeps them separated and hiding behind corners and trees, the emotional hold wavers.

The villains suffer from the same heavy-handedness as those in Deliverance, a classic comeuppance picture that is deservedly imitated. Beyond the Bond henchman dialogue (“You won’t shoot me, you don’t have the guts”), the wild-eyed knuckle-dragging baddies seem to be in comically absurd contrast with the premise that the film builds: that these are a sinister people who hide their homophobia until no one else is watching — that is, no one else who might disagree with them. James (Aaron Ashmore) and Gavin (Rossif Sutherland), along with Gavin’s unnerving Karen avatar Layna (Celina Sinden), are not only targeting gay couples, but they are also livestreaming the whole hunting party on some Parler-adjacent website for the sort of folks who might be entertained by such things. This is where the ultraviolence can get dicey. Revenge films such as these punish their protagonists for leaving their element and entering a rural space, just as the men of Deliverance do on their rafting trip, just as Jennifer Hills does on her rural writing retreat in I Spit on Your Grave. Renee and Valerie have the added, primary sin of existing while gay, and the trauma visited upon them makes that clear. James, Gavin and Layna all make the usual quips that LGBT+ citizens endure all the time: crude threats of conversion, slurs thrown at multiple aspects of their identity (not just orientation, but gender as well) and prolonged assault. The trio takes one doomed gay character and strings them up in a barn before murdering them, using imagery that, for an entire generation of viewers, can invoke that of the hate crimes that still make headlines today. Mills wisely avoids putting the gay death onscreen, though every scream and slash is mixed into the audio as loudly as possible. Shocking ultraviolence is to be expected for this kind of picture, just as it is with the rape-revenge subgenre and, like the subgenre, its success hinges upon the turnabout violence and extrajudicial justice the victims get to employ later on. The turnabout does arrive, but when it does, the hunters-cum-hunted get off easy. Revenge kills are relatively quick and suffering-free compared to the laborious torment that went down an hour prior. Thus, there is little catharsis to be found in The Retreat, and with survival horror and revenge horror, catharsis is the name of the game. Without it, there is just the violence. 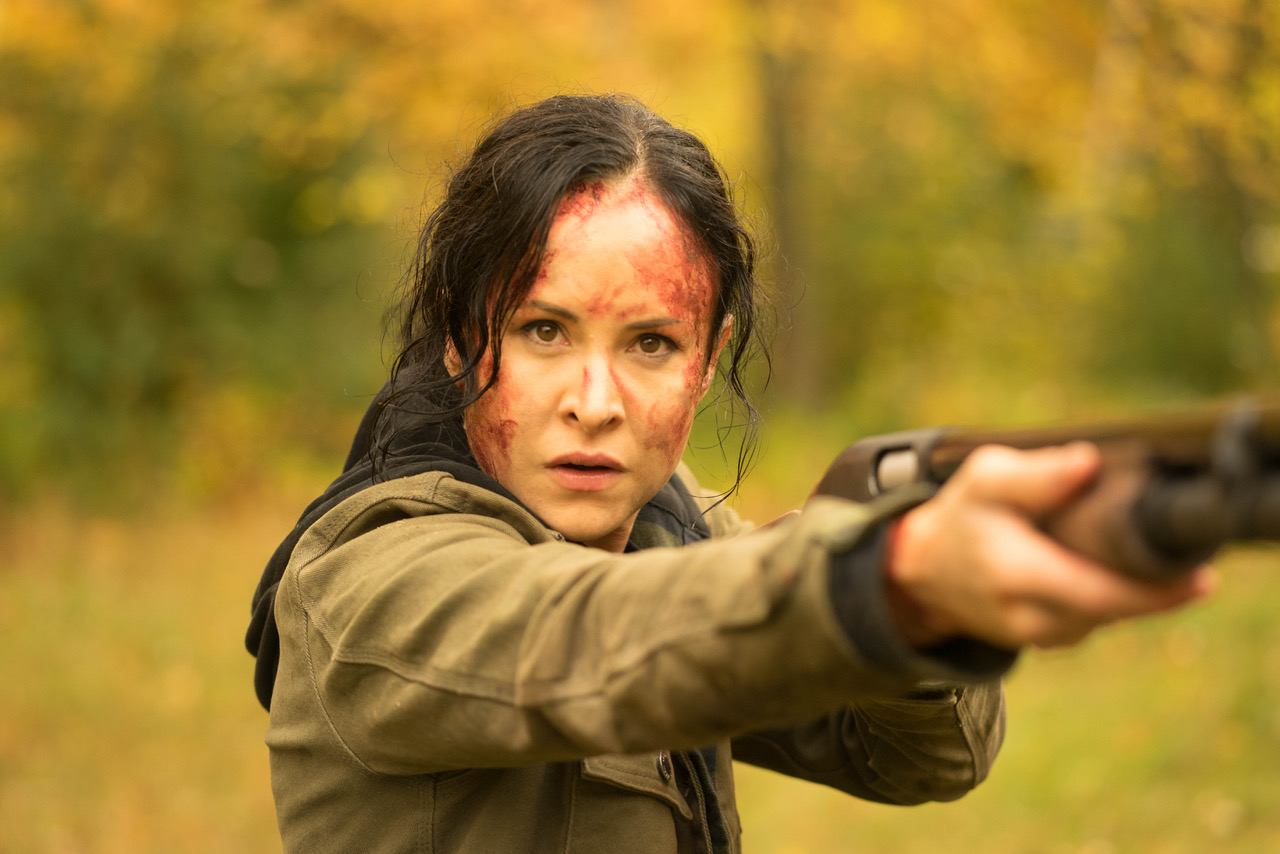 On a technical level, The Retreat hits its marks. Cinematographer David Shuurmann (who also directed photography for the thrilling lesbian survival horror What Keeps You Alive) finds the ominous in the tree line, lensing to emphasize the woods’ depth and shooting the women at odds with nature every chance he gets. The baddies’ Airbnb is lived-in, neutrally toned but filled with red flags like an aggressive replica painting of a hunting party of dogs descending upon a buck in the woods. In fact, there are hunting motifs throughout the runtime, from prize totems and trophies strung about the area to a Chekov’s Gun in the form of a deer blind. Richards’ screenplay clocks in at a snappy 82 minutes, and the pacing is at a capable trot.

The Retreat is a film that would have made waves a decade ago on the lesbian representation alone. While having gay leads is a refreshing inclusion in a genre that has historically excised or executed them, Mills’ movie is a toothless response to the “bury your gays” trope. The Retreat works best as a survival horror alone, where the pacing is crisp, and the performances are dire.