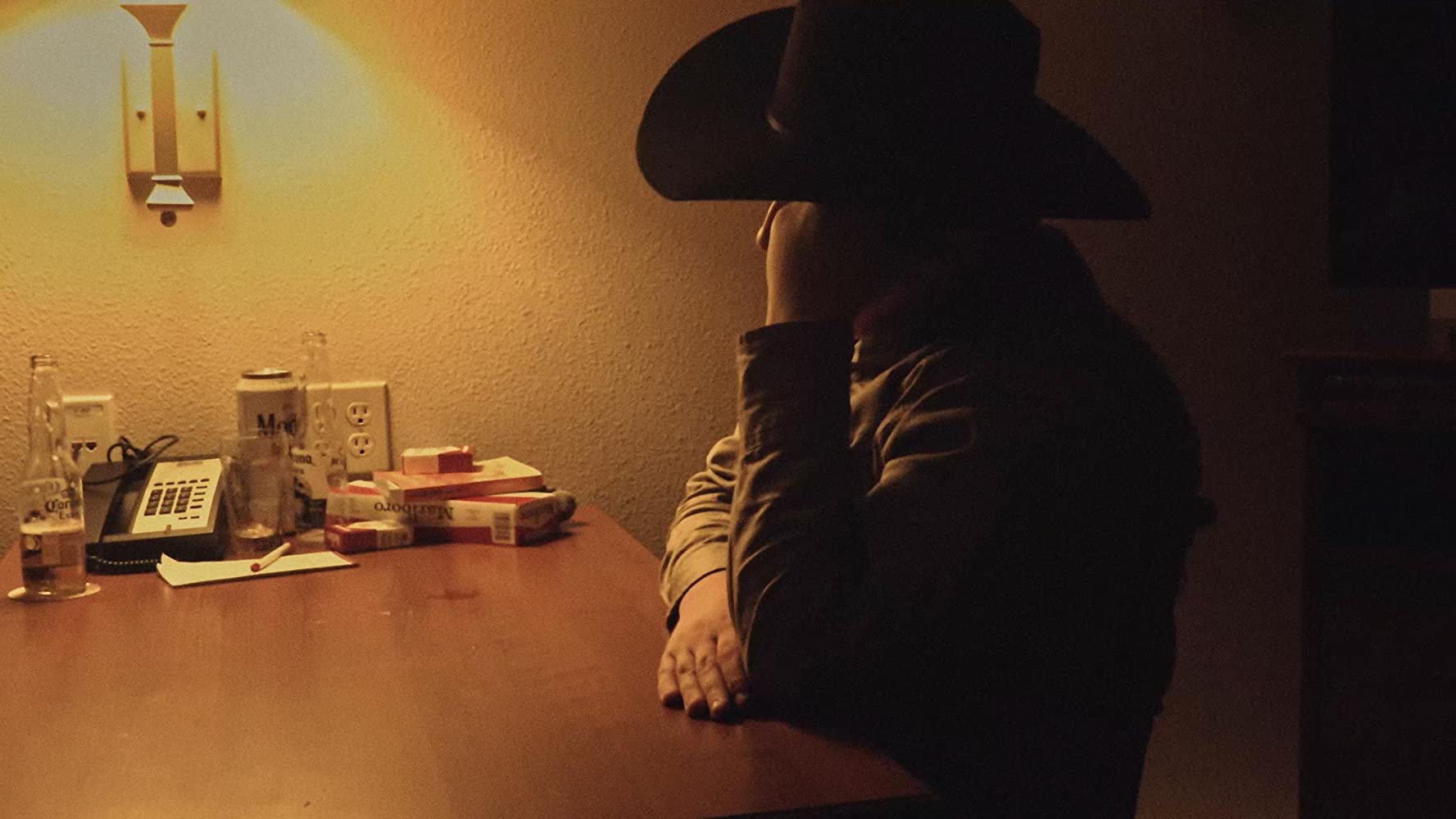 Sat in a derelict, abandoned El Paso house, snakeskin boots kicked up on a table, clad in a cowboy hat and double denim, Kyle sighs. “People who get mad about fucking tweets are fucking retards,” he says to the ether. This is a typical scene in TFW NO GF, editor-turned-director Alex Lee Moyer’s first feature, which investigates the online subculture around the TFW NO GF meme that depicts feelings caused by a lack of companionship through the bald “Wojak” illustration ubiquitous on 4chan and beyond. Perhaps the film was both blessed and cursed by circumstance. TFW NO GF’s premiere at South by Southwest was cancelled by these uncertain times, which morphed into a spot for the festival’s online partnership with Amazon Prime last month, where the streaming site gave its vast membership access to a number of new titles. How this will benefit the filmmakers is uncertain, but a broader audience was made aware of TFW NO GF as a result. And perhaps this garbled method of release is ideal for the contents of Moyer’s documentary.

TFW NO GF’s subjects are the Sad Boys known as “Incels” (involuntary celibate); young men in post-industrial American towns, who see little opportunity — romantic, creative, or otherwise — and immerse themselves into online subcultures that wallow in pain and depression, finding humour and consolation in the shared experiences of loneliness through cyberspace. Moyer uses Fox News and other traditional media clips to explain terms like “Incel” and “Alt-Right,” framing figures like Tucker Carlson, Donald Trump and Bill Maher as defenders of masculinity. If these arch-figures are the loudest voices on male problems, then it’s no wonder there is a crisis in male mental health. 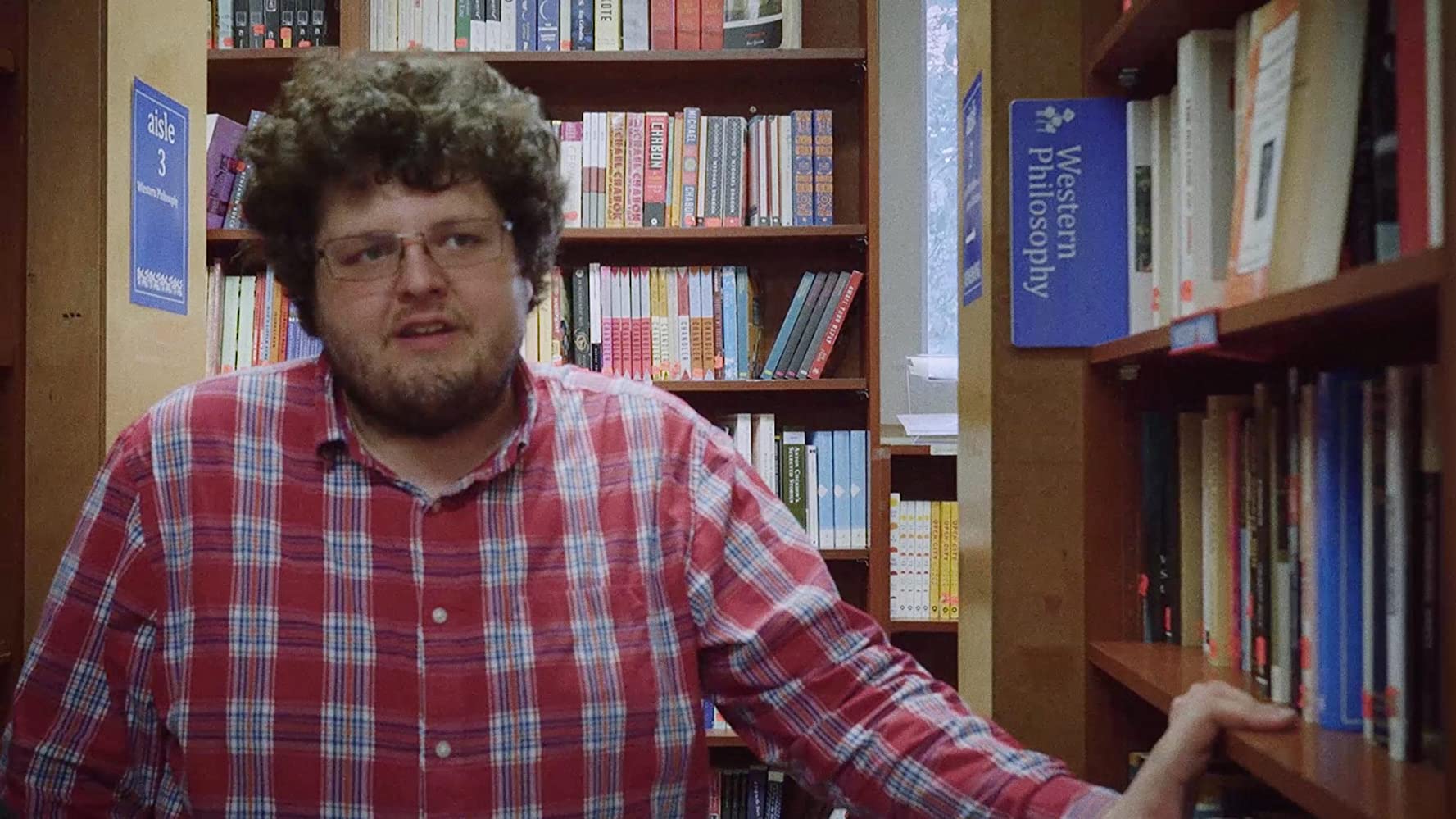 Grainy 1990s home footage introduces two of the major players, Viddy and Charles, as children playing with sparklers, while voice-over narrates their union with 4chan: Raised by Wolves. Grown up, these men are lost in Kent, Washington, where factories lay in the background of each shot, but which don’t even present them with an economic opportunity; they experience the lies of potential repeated since the birth of neoliberalism. Their reality morphs with the online. They have entered the fizz of the sparkler. “You can’t really decouple the two,” Charles says, as tweets and forum posts overlay drone shots of suburbia.

Moyer’s efforts to depict the online realm run into trouble with striking a balance between nostalgia and futurism. The director uses clips of early memes like Evolution of Dance and Leave Britney Alone, along with clips of the video game Halo, all of which seem to come from an earlier iteration of the internet. Then, using animation, cyberspace appears as a Tron-like grid, stretching to an infinite distance with 80s synth music and Miami Vice-like colours. Animator Prince of Zimbabwe envisions mankind made of Wojaks, providing a Blade Runner parody and a sequence of Wojak soldiers in Vietnam, burning buildings and cutting to and from actual photos of the time, including the 1972 “Napalm Girl” photo of Phan Thi Kim Phuc as testimony about the maleness of 4chan wafts across the soundtrack. It is a provocation, but between broader political questions asked by references about buying guns on Twitter and opioid addiction, this sequence is too unfocused to tell exactly where the attack lines are drawn. 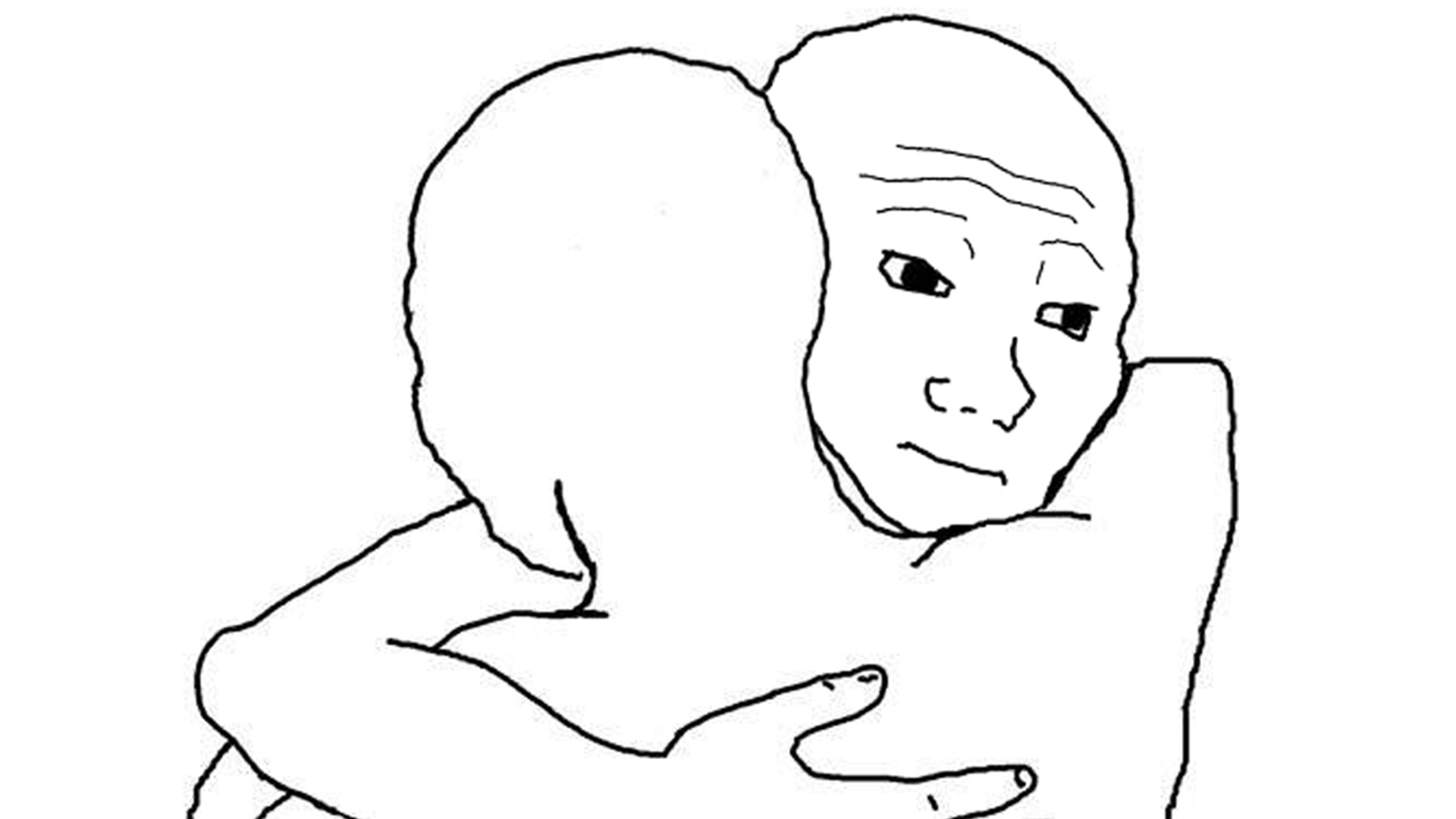 By way of expertise, Moyer interviews Kantbot, an academic with 17,000 followers in the community who holds aspirations to be a public intellectual. He doesn’t say anything particularly radical or dangerous — in fact, he talks like a watered-down Noam Chomsky, spouting paranoia about the lack of actual physical proximity to those he interacts with. Here, TFW NO GF utilises more shots of sci-fi cityscapes. Kantbot increasingly takes on the form of a narrator; as the boys talk about playing a character and discuss the sweet spot between irony and sincerity posting, his resemblance to characters like Ignatius J. Reilly and dril becomes unavoidable.

Moyer’s genuine sympathy for these men counters the “school shooter” narrative around lonely males online that news outlets will pedal. If one is even vaguely au fait with the online world, this particular myth won’t need to be busted. TFW NO GF eventually reaches the controversy around incels and Todd Phillips’ Joker, where outlets reported that the film was dangerous and would provoke incels to shoot up cinemas. When Joker was released, it was clear that this controversy was manufactured by critics and PR agents to increase the film’s box office and awards potential. This TFW NO GF section exposes a gap in Moyer’s narrative. Terms like “Alt-Right” and “Incel” are passé, catch-all media inventions, and yet those terms are what’s used to sell the film. In the same way that those people labelled as an incel might wear it as a badge of pride to forge an identity, TFW NO GF’s reticence to reach conclusions is like receiving second hand information. 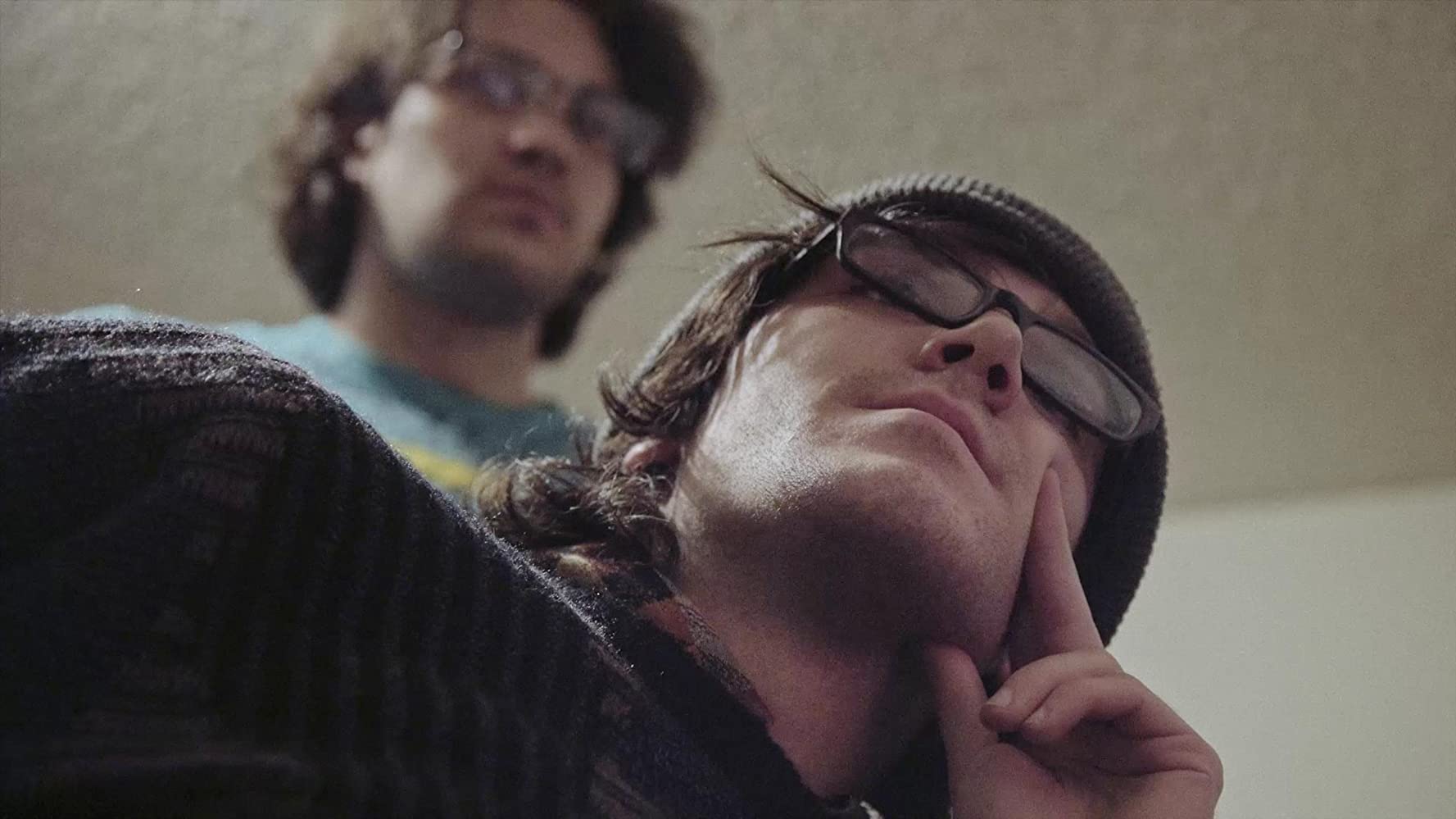 For all the terms TFW NO GF defines through on-screen cards quoting Know Your Meme, concepts like “Ironyposting” and “shitposting” — which give people plausible deniability when they say or do something harmful — don’t seem to have entered the film’s vocabulary. One scene has the boys discuss the maleness of the phenomenon while loading pistols in the moonlit snow. As subculture within subculture reflects boundless ironies and mistruths, the apparent honesty with which Moyer treats her subjects makes it harder to get to the core of how “online” groups operate and multiply. One is left wondering how these subcultures are driven by algorithms to conform to a particular set of aesthetic standards. Moyer foregrounds the relationship between traditional and social media — but without commentaries by her contributors, one wonders how Silicon Valley programmers use people like Kantbot to their advantage. TFW NO GF is so scattershot that its wake-up-and-smell-the-roses conclusion is really the only place it can go.

The subjects tell their own story and experience, which is integral to the viewer’s understanding of their mindset, but Moyer so thoroughly wallows in the incel viewpoint that the film has the sensation of reading a 300-page forum thread. By the time TFW NO GF lets the viewer up for air, faith in the facts will have dissipated. It may feel like time to get offline, and stay there.