Denizens of Twitter, usually male but it differs, are fond of pondering the question of what their followers’ partners do to annoy them most. During a worldwide lockdown, this so-called game has been even more rampant, with increasingly petty squabbles highlighted in comment threads that go on for days, even weeks (well, everybody is bored out of their minds). Vivarium, the sophomore feature from Irish director Lorcan Finnegan, following 2016’s Without Name, posits a nightmare scenario in which a young, otherwise happy couple is marooned in a house alone with a baby that isn’t theirs and forced to watch their lives and their relationship disintegrate around them. To say this is the ideal isolation horror movie for these confusing times would be a vast understatement.

Imogen Poots, allowed to use her own accent for once and gifted top billing here, which she surely deserves after years of toiling away in nonsense fare way beneath her considerable talents, is Gemma, a schoolteacher and girlfriend, not wife, to Tom (Jesse Eisenberg), the school’s janitor/handyman. They’re a thoroughly modern couple, both self-sufficient and financially independent, in no hurry to settle down or have babies, and by all accounts they’re equals in the relationship. On the hunt for a property to purchase, they stumble into a real estate agent’s office that’s part art installation, part museum with just a single, solitary person in there; creepy Englishman Martin (Jonathan Aris, who’s channelling Jesse Merlin while trying to learn our Earth customs).

Martin convinces Gemma and Tom to check out the hipster-sounding Yonder, a hip new suburban village with a sign at the entrance ominously proclaiming, “Quality family homes. Forever.” The lawns outside each identikit house are very American, while the properties themselves have a more European feel. Inside, there’s a painting of the house itself in the living room, while in the bedroom, there’s another painting… of that room. Suffice to say it’s not exactly this cool young couple’s scene but, before they can tell creepy Martin to take a hike, he’s disappeared, leaving Gemma and Tom alone in the estate. They drive around for hours but, aside from not seeing a single other soul, appear to be lost in a massive, endless grid. Forced to spend the night, they settle down, only for a box to turn up with a baby inside and some strange-sounding instructions enclosed: “Raise the child and be released.” Given the footage of cuckoos at the beginning of the movie, it’s safe to say Gemma and Tom are in trouble. 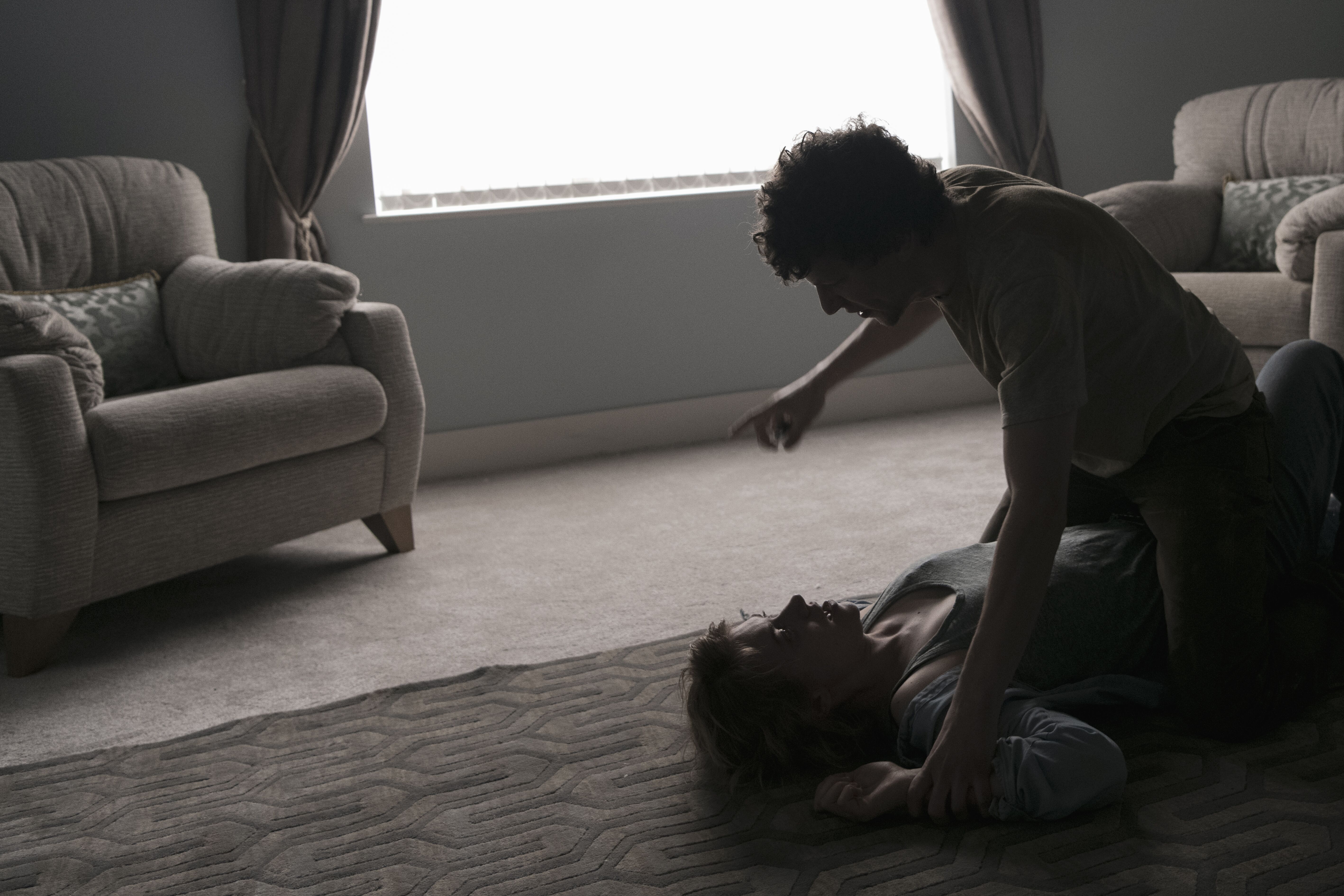 Vivarium, first and foremost, takes what’s usually a fun Saturday afternoon activity — going to view a show-house, see: Lady Bird — and makes it incredibly uncomfortable and weird. Something feels off even while Gemma and Tom are driving into the estate, the rows and rows of identical houses represented in CGI, which adds to the artificial, actual-size model village atmosphere. Yonder feels claustrophobic even though it’s spread out, while the perfect clouds hanging above it look like they’ve been transferred in from a Pixar movie. The food the couple gets delivered to them each day is tasteless, adding to the hopelessness of their situation. But the genius of Finnegan’s premise (the script is credited to the director and Garret Shanley, who also wrote Without Name) is that it’s torturous without anything terrible really happening to Gemma and Tom — similar, naturally, to how everybody stuck at home during a global pandemic with nothing to do but watch Netflix and eat junk food must feel.

Everything about Yonder feels slightly off, making Vivarium a weird film but not too weird as to be isolating. Gemma and Tom still speak and behave like regular people, even as the fabric of their lives begins to break down. The introduction of the child, who grows rapidly, adds a further wrinkle as the couple falls into typical gender roles. Gemma does the majority of the parenting while Tom busies himself digging a massive hole in the garden. Tempers fray as both parties question why they should have to consider the other person’s position, even though neither of them asked for this. Furthermore, as both Gemma and Tom are wont to point out, this isn’t even their kid. It doesn’t help matters that the boy in question is clearly evil, equal parts Damien from The Omen and the fabulously over-the-top Goth ghost child from Sinister 2.

Initially played by young Senan Jennings, he’s like Goosebumps’ ventriloquist dummy Slappy come to life, utilizing a bizarre and brilliantly done vocal intonation to mimic his “parents.” It’s a simple yet effectively creepy choice that lets viewers in on the fact the kid is mimicking Gemma and Tom’s behaviors and speech patterns even while they struggle to make sense of him. Jennings is terrific in the role, particularly considering he’s tasked with doing quite a lot, even outside of playing opposite two heavyweight adult actors. Sharing most of his scenes with Poots, whose Gemma is a wary, reluctant mother figure (“I’m not your mother,” she keeps reminding him firmly), Jennings cultivates a veil of innocence but lashes out whenever he doesn’t get his way, hinting at the darkness lurking just beneath the surface. Eanna Hardwicke (Hulu’s Normal People) is perfectly cast as the adult version, copying Jennings’ vocal rhythms while also injecting an element of slyness to his own tussles with Gemma.

Poots, who’s the bonafide protagonist of the piece, gives it her all whether weeping in the street or hunting down her own adoptive child in an effort to figure out what’s really going on. She has a natural rapport with Eisenberg, with the two making a believable couple, particularly during one tiny moment of pure freedom and joy while they’re dancing to music on the street. Eisenberg can play nervy and anxious in his sleep, but Tom is a darker role, encompassing elements of his Lex Luthor (easily the strongest element of Batman V Superman: Dawn of Justice) and The Social Network’s Mark Zuckerberg but also striking a chord for the work to come as he gets older, settles into himself and branches out a bit more. Tom isn’t the villain of the piece, nor is he a pitiful loser dragging Gemma down, but Eisenberg hints at the layers in his psyche even as he’s digging a tunnel to nowhere. It’s a skilled, controlled performance brimming with emotional weight and perfectly matched by Poots’ soulfulness.

Because Vivarium feels like it was shot entirely on a closed set adds to the off-kilter atmosphere. Everything feels artificial, right down to the cinematography by MacGregor, which makes every scene look like it’s got a glaze over it, almost as though the whole thing is one giant donut. Everything is sun-bleached, the colors too bright and too sharp, creating a surreal, trippy atmosphere even while the action is relegated to an otherwise typical suburban house. Finnegan plays with a setting most viewers will feel entirely comfortable in, putting its horrors out in the daylight where the shadows won’t hide them. The writer-director has said the film was inspired by the numerous ghost estates scattered around Ireland, which remain empty even while a nationwide homelessness crisis rages on. Vivarium could certainly be seen as a commentary on how capitalism negatively affects home development, and how damaging it can be to all kinds of people. The movie could also be taken as an indictment of how society treats mothers, leaving them alone and isolated without support while fathers are given something of a free pass to leave the home and focus on themselves.

Taken purely at its basest form, Vivarium is a terrifying isolation horror movie that goes for the jugular. There isn’t a lot of hope in the film, so it may turn out to be a tough watch for those stuck at home feeling the effects of the pandemic and struggling to see a way out. But, in fairness, if Finnegan offered any easy solutions, they’d end up feeling as fake as Yonder itself.