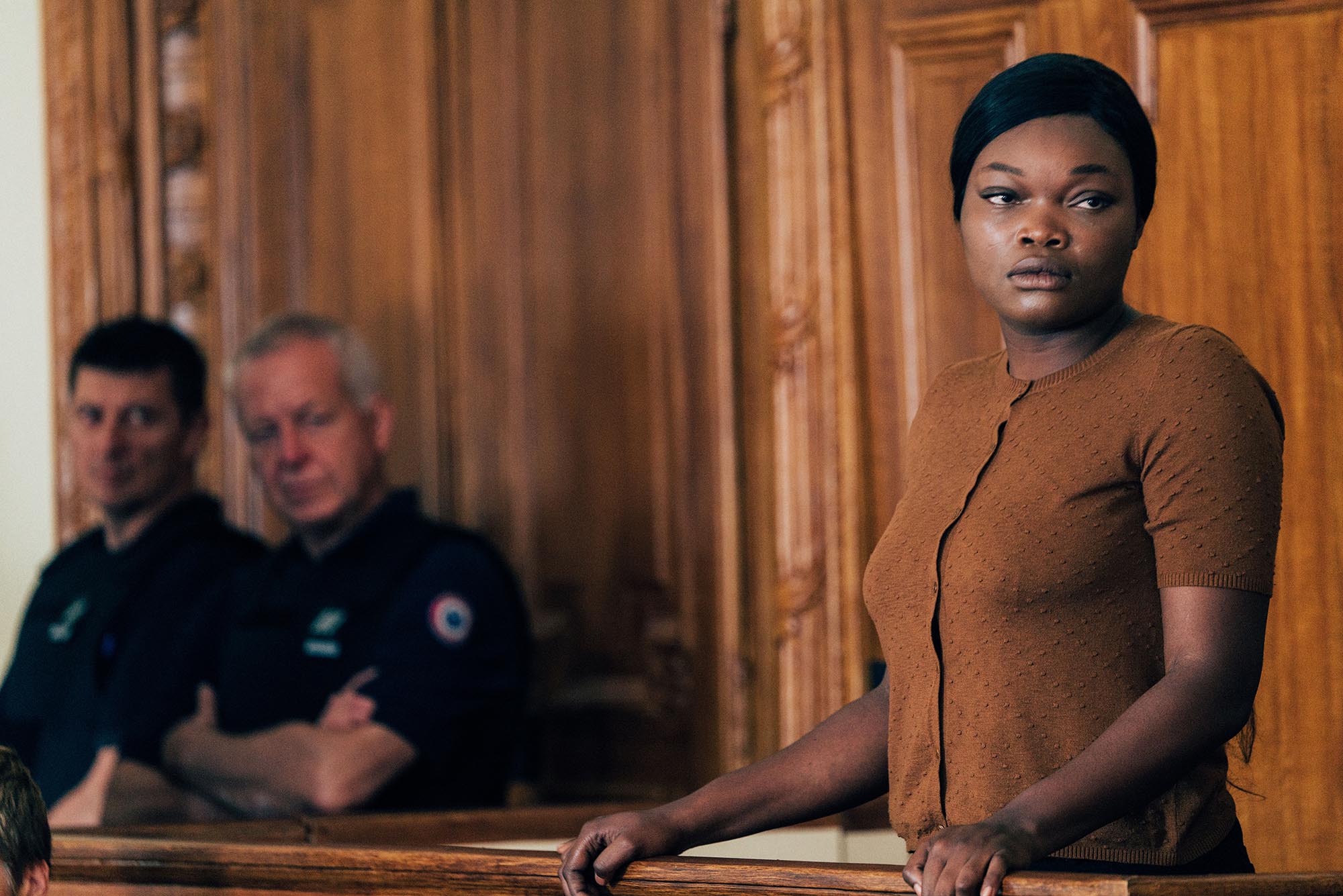 Much of Saint Omer is constructed around long, still shots of its main protagonists, situated in a courtroom in which much of the film takes place. One might assume that these visuals would perhaps allow viewers some insight into the inner worlds of the characters — namely Laurence Coly (Guslagie Malanda), a young woman accused of killing her 15-month-old baby, and Rama (Kayije Kagame), an academic watching the trial unfold — but these shots give precious little away. The mystery of these people remains, the camera unable to pursue their thoughts and feelings, their motives unbeknownst to the audience.

It is precisely because Alice Diop so wholeheartedly embraces this mystery that she crafts something quite special in her fiction feature debut, apart from the maudlin social realism that infects most festival programs. The filmmaker previously released a number of documentaries, and one can see the core of such practice in Saint Omer, which is derived from a real case, but Diop goes beyond a just-the-facts retelling to explore race, womanhood, structural oppression and the limits of legal institutions in reliably delivering justice when it comes to the metaphysical.

Laurence‘s argument on the defense stand, even as she admits to committing the act, speaks to a wider philosophical issue that sits beneath her actions. In the courtroom, Diop takes viewers through the protagonist’s life story: a difficult relationship with her parents, a fling with an elder Frenchman and a brief university experience, along with hallucinations and a mental breakdown. Laurence’s story is difficult, traumatic and contradictory. Sometimes it is other witnesses who contradict her; sometimes it is she herself who seems to make those contradictions, yet the character seems to embrace them.

Traditional courtroom dramas are predicated on rather basic tropes around audience sympathy, a narrative technique that harks back to arguably the most acclaimed of all courtroom dramas, Sidney Lumet’s 12 Angry Men (1957). But where that film sets out its stall rather early on with audience surrogate Juror 8 (Henry Fonda) campaigning in the jury room for the defendant’s innocence, Saint Omer’s audience surrogate, Rama, is left at sea without a rudder. She arrives to the trial as an attendee (as Diop did in the real-life equivalent). In an opening scene, Rama gives a lecture on the author Marguerite Duras, and her status as an academic presupposes that she wants to engage in how Laurence‘s case is presented to the world, how her suffering is externalized and narrativized, or how her criminality is accentuated for the purposes of the legal system. Given that Saint Omer follows a Black woman in a predominantly white country, the assumption is that viewers are in for a treatise on gendered and racial dynamics in the courtroom. 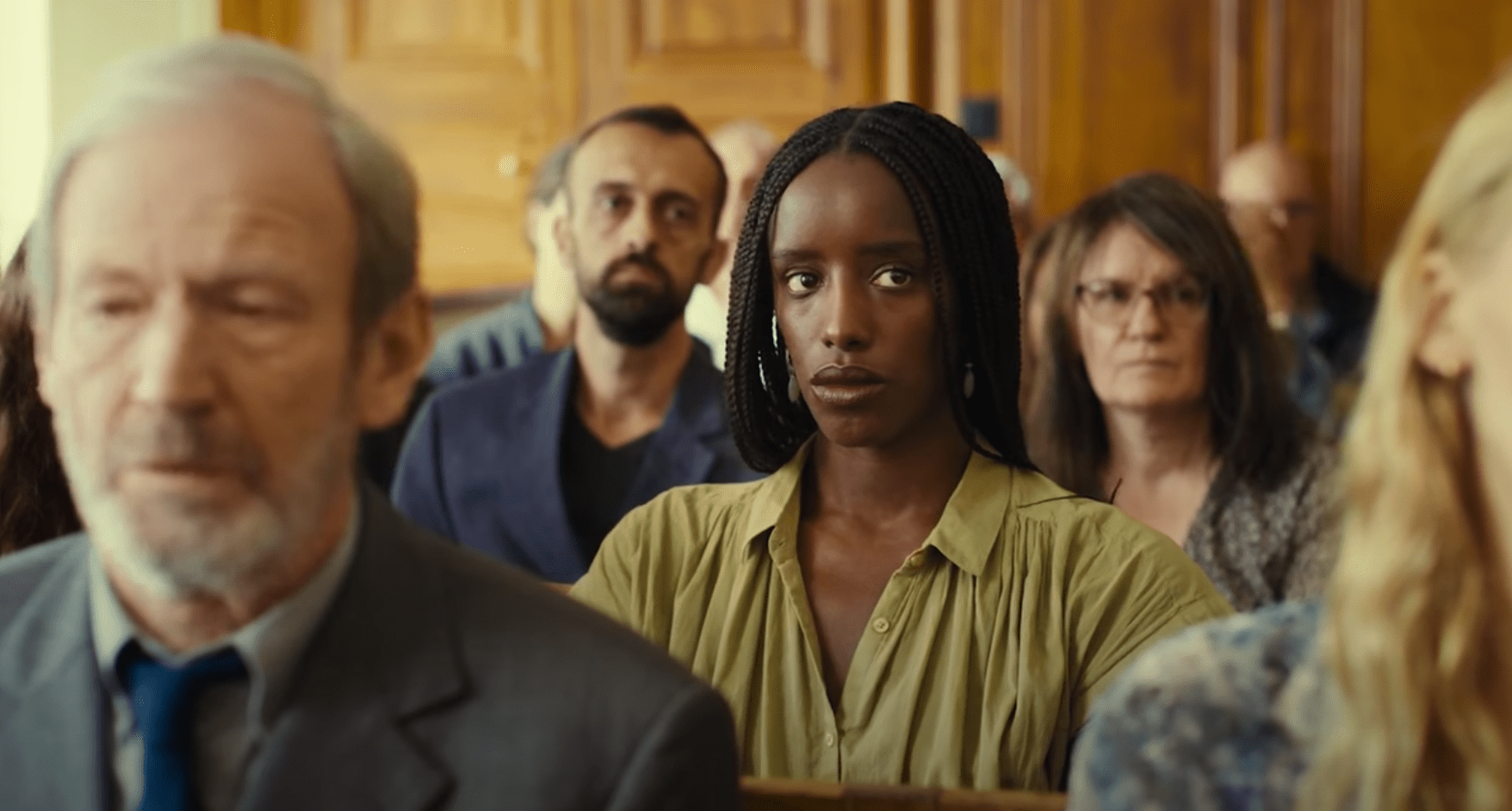 Yet at every step along this route, Saint Omer complicates itself and its point-of-view. The film probes beyond the basic ideological positions that are 10-a-penny for modern socially-conscious movies that deal with race and gender — those standard-issue left-liberal stances that broadly assume films with the right politics will be able to impart the right politics on the audience. It is a basic and simplistic reading of the relationship between cinema and audience, and one which has largely infected the European and North American festival circuit, a world full of besuited and well-groomed viewers who are often a million miles removed from the problems depicted, yet a world desperate to capture the zeitgeist all the same. It’s a mode of filmmaking tamped down by steady naturalism and social realism, forever dealing with The Big Problems but never with anything big to say.

Saint Omer simply shoots this mode right back in its face. The audience’s identification with Rama, who seemingly expects to sympathize with Laurence’s predicament, is very quickly torn asunder. Yet Laurence refuses to fall into a basic narrative of victimhood or murderousness but equally embraces both at the same time. Diop never lets viewers forget that Malanga’s character is accused of a heinous crime — and admits to the action — but equally the director wants the audience to focus on her retelling of this story in court.

Diop strips the visual language of the courtroom drama down to its absolute basics by focusing on people listening and talking. There are no dramatic re-enactments of the events described or monologues for actors to speechify and have their moment in the sun (another Venice competition alumnus from this year, Argentina, 1985, is guilty of this). Saint Omer asks its actors to deliver very little in emotion (Diop has spoken of the influence of Robert Bresson in her films, and his metronomic, still style is certainly visible). The cumulative effect of all this achieves a hardened, hypnotic focus.

In stripping down all these flourishes, Saint Omer is able to pierce through all the aesthetic obfuscation and ideological peacocking, both in the actual courtroom and in filmic retellings. This is a movie that recognizes the legal system for what it is — a necessary evil that allows for crimes to be placed into record, but which flattens protagonists into pre-existing identities: defendant and prosecutor, criminal and innocent, witness, lawyer and judge. The courtroom is a glorified storytelling device, where two sides of the story battle it out for supremacy, often struggling to reconcile for grey areas or ambiguity.

In penetrating beyond this position, Diop created a movie that looks to the very core of how we build and narrate stories, and what implications that has for the identities we give ourselves and others. Saint Omer isn’t a film that looks at gendered and racial dynamics in the courtroom; it’s a film that looks at the ideological puppet strings that define those gendered and racial dynamics beyond immediate visibility. It’s nigh-on impossible to film things we cannot see, but Diop’s feature debut is one of the few movies that manages to do so.