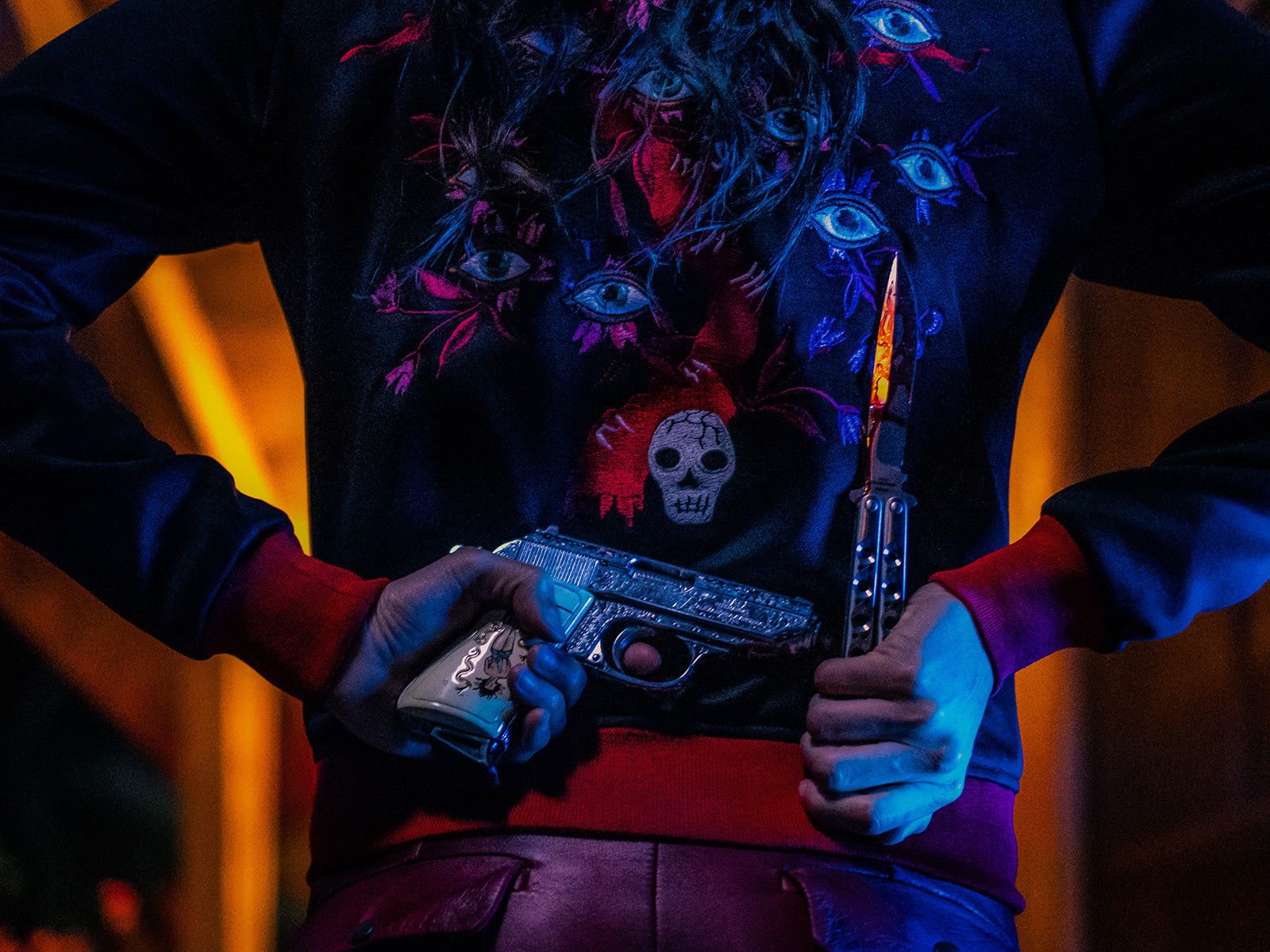 If Quentin Tarantino’s 2019 epic Once Upon a Time in Hollywood is a melancholic ode to a kind of original, auteur-driven, theatrically distributed Hollywood mythmaking that is living out its final days, then Nicolas Winding Refn’s 13-hour Too Old to Die Young announces new formal and thematic possibilities. For better or worse, streaming appears to be the securest future medium for mid-to-high budget artist-driven cinema. As an aside, it is worth noting that there is something ironically postmodern about the fact that it is the corporate leviathan Amazon that afforded Refn this space to evade contemporary mainstream American media’s suffocating demands for tasteful restraint, moral affirmation and postured ideological didacticism.

When thinking through Too Old to Die Young’s similarities and contrasts with Tarantino’s unwieldy aforementioned opus, it is important to acknowledge Los Angeles’ foundational aesthetic and symbolic role within both films: Refn’s project is, like Tarantino’s, something of a cumulative statement on America’s self-produced mythologies of the city. Both directors concern themselves with Hollywood fantasy, but where Tarantino sees a form of pure romantic escape, Refn sees a vexed, seductive site of simulation and damnation. Too Old to Die Young (really a 13-hour film) is haunted by the specters of Raymond Chandler, Nathanael West, Jim Thompson, Joan Didion and James Ellroy; its visual grammar is pure Refn, but it carries the residue of everything from Billy Wilder’s Sunset Boulevard (1950) to John Boorman’s Point Blank (1967) to William Friedkin’s To Live and Die in L.A. (1985) to Michael Mann’s Collateral (2004). Most noteworthy, though, is the way the sprawling narrative builds on two key authorial points of reference — namely, David Lynch, whose Twin Peaks: The Return (2017) might be the first major exemplar of the cinematic possibilities inherent to long-form streaming-based narrative; and Bret Easton Ellis, whose obsessions with “post-empire America” and “numbness as a feeling” are frequently bound up in his fixations on Hollywood cinema. These themes undergird his classic debut novel Less Than Zero (1985) and its chillingly minimalist metatextual sequel Imperial Bedrooms (2010), but perhaps more relevantly, they drive his screenplay for Paul Schrader’s The Canyons (2013), a Bressonian study of erotic nihilism and simulacrum.

Like The Canyons, Too Old to Die Young uses its genre framework (in this case, California neo[n]-noir) as an entry into self-reflections on visual and textual narrative, and as an engine for damning sociocultural allegory and satire. Co-written by crime comic book writer Ed Brubaker, the film centers on young police officer Martin Jones, played by Miles Teller with immovably robotic placidness. Promoted early to the position of detective, Martin’s dual life also sees him in a secret relationship with a 17-year-old girl, Janey Carter (played with brilliant restraint by Nell Tiger Free), whose leering father, Theo (William Baldwin), barely restrains his deranged, increasingly incestuous fantasies behind a twitchy, cocaine-addled smile. Things are further complicated for Martin by his hidden identity as a ruthless vigilante, whose predilection for dispensing with sexual predators is orchestrated by his connection with new age queen of retribution Diana (Jena Malone) and her haunted associate Viggo Larsen (John Hawkes). Through an expertly structured series of events, Martin’s world converges with the deadly machinations of a Mexican cartel fronted by the inhumanly beautiful, vicious and Oedipal duo of Jesus Roja (Augusto Aguilera) and Yaritza (Cristina Rodlo). These characters share DNA with pop cultural archetypes, but Refn and Brubaker sand them down to alien ciphers of emotional catatonia, pure motors of id and will. Often recalling the off-kilter performances populating Lynch’s oeuvre, the cast of Too Old to Die Young calls attention to itself as a collective of fictions. Impressively, this stylistic element effectively supplements the film’s mesmerizing dream-reality rather than calling attention to anything like snarky self-awareness. 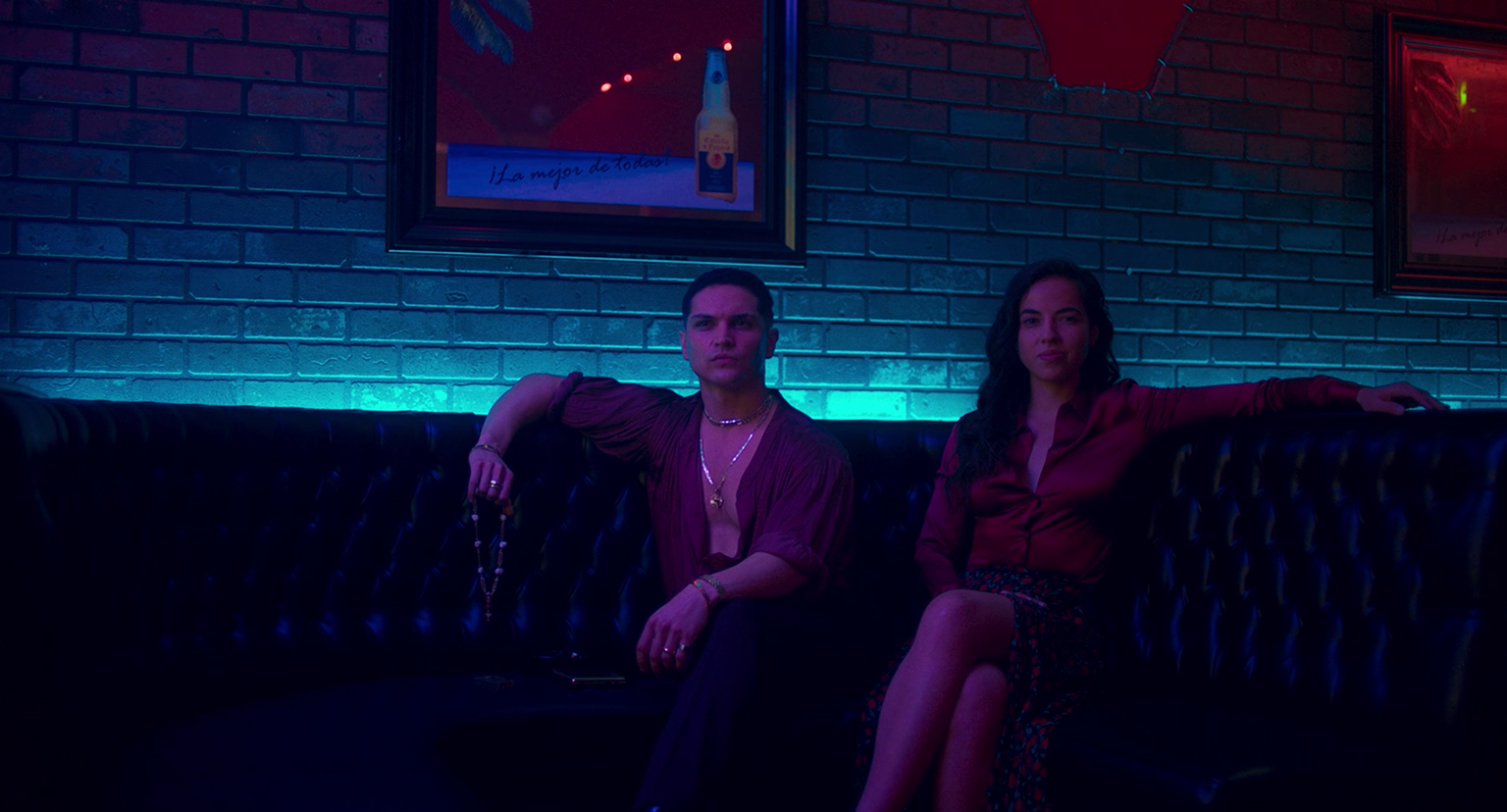 Bound up in taboo fetishism and constantly oscillating commitments between the base and the transcendent, and between comedy and horror (much like Lynch’s Twin Peaks: The Return), Too Old to Die Young uses its genre-codified landscape of moral corruption as an allegorical mirror for America’s crumbling civilization, and as a space for a far-reaching aesthetic study of eroticism and violence in art. Putting itself in conversation with the cinematic genre signifiers most loudly established by Alfred Hitchcock’s oneiric, perverse California masterpiece Vertigo (1958), Too Old to Die Young constantly scrutinizes the wavering spaces where the tawdry mingles with the sublime, where sexual (re)productivity entangles with morbidity and destruction. Refn and cinematographer Darius Khondji often light their meticulously staged tableaux with vibrant purples and reds, recalling the id-associative spaces of strip clubs and casinos, gorgeously enshrouding bodies and faces in episodes of brutality. The story makes micro and macro use of build-up and release in its representations of sexual and violent arousal, rendering textual the ways that Hollywood’s genre mythologies often subtextually intertwine the two. Thankfully, Refn doesn’t moralize and lecture his viewers, but rather studies these visual and narrative patterns as openings for exciting pop art provocations. There is certainly a diagnosis of colonial America’s longstanding obsessions with power, vengeance and vigilantism, but Refn and Brubaker’s story suggests broader thematic reach.

Some of Too Old to Die Young’s most thematically pointed moments occur when Viggo listens to a paranoid, apocalyptic radio program that acts as the story’s abstract brand of Greek chorus. Driven by a seemingly reactionary paranoia, the program host explicitly (if crookedly) voices the film’s focus on late capitalism’s production of increasingly fractured social consciousness. Viggo distills and clarifies the program’s frazzled anxiety into a lyrically pessimistic monologue, silhouetted beside Martin against the bokeh of cars floating across a distant L.A. highway. Here, Too Old to Die Young’s tonal evocations of a world living under the shadow of worsening ecological catastrophe and brutal economic inequality rise to the surface, growling under a Schopenhauerian shroud. “We spent the last 500 years since Copernicus in this slow crawl to where we are now, to this pinnacle of human achievement, where we finally bent nature to our will,” Viggo says. “We split the atom. We broke the fabric of reality. That’s how far we’ve come. Now the lights of our cities stretch further than the stars in the sky; but the more perfect society gets, the more psychotic we become… We became slaves to the systems we built. Now it’s all falling apart. Soon our cities will be washed away by floods, buried in sand, burned to the ground.” 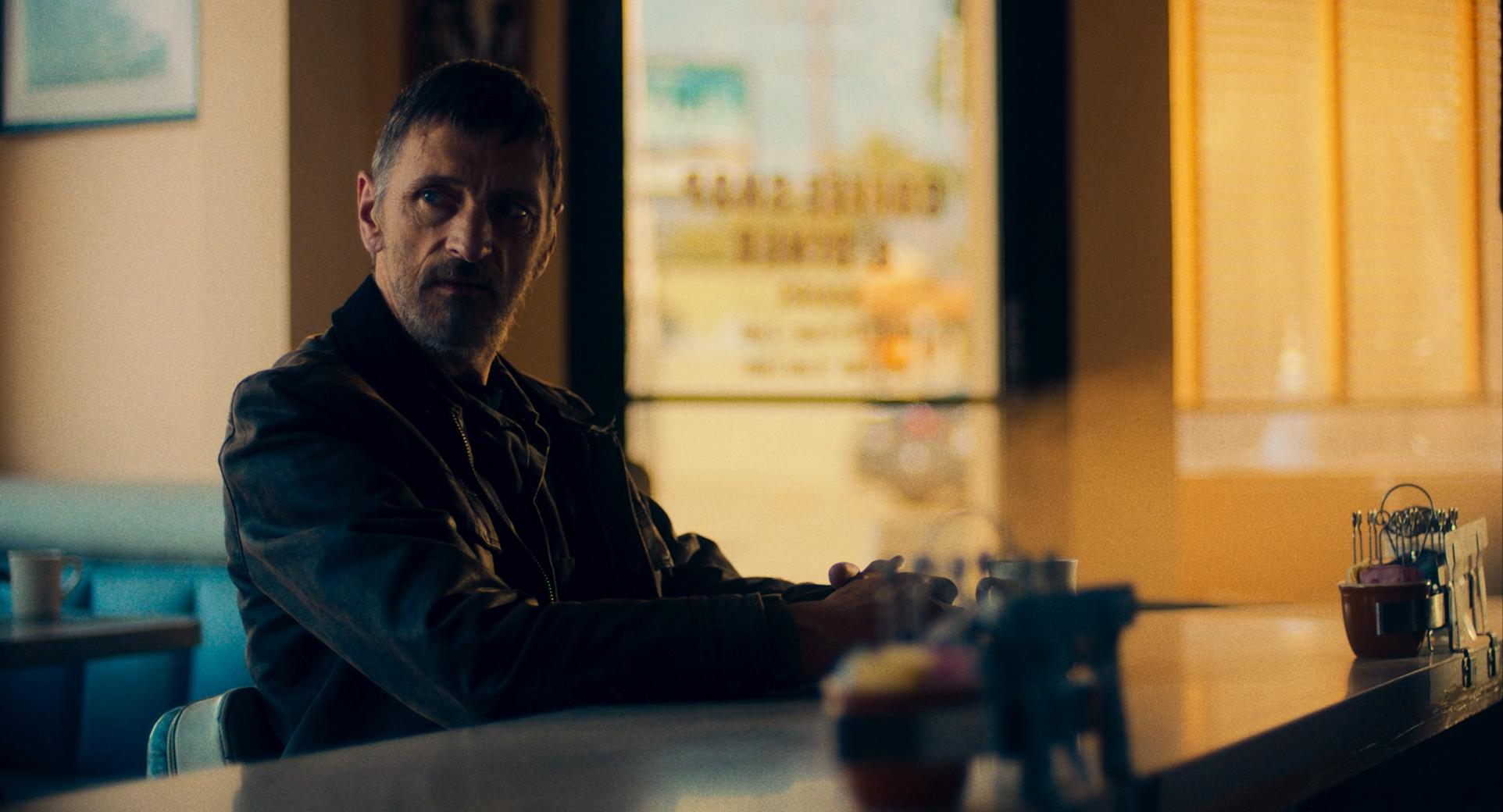 In Too Old to Die Young final volume, mystic Diana soliloquizes a similarly mournful vision for our collective future, minutes after she finishes masturbating to the instructions of a virtual reality guide. By staging these two scenes so closely together, Refn and Brubaker again foreground an uneasy meeting place for sex and death. Cocooned in her minimalist mansion, Diana glides through some mysteriously transcendent space where the knowledge of impending apocalypse melts unassumingly into a blissful stillness of would-be mysticism. She dips her feet in her pool while calling into work, excusing her absence by claiming she is sick. Diana dances alone across her chic, minimalist kitchen and living room, flooded with sunlight. She props up her iPad to watch a puppet show that humorously details the erosion of the human species. Then Diana delivers her soliloquy to an artwork mounted above her bed, her serenity unwavering aside from her soft weeping. In the future, she says that “the few will have everything, and most will have nothing.” Diana closes by noting with a strange optimism that, “as man implodes in a wash of blood and silence, a new mutation will emerge.”

Refn’s cinematic vision in Too Old to Die Young is a complex piece of post-postmodernity, grim and hilarious and sexy, and in many ways irresolvable. Certainly, each volume (or “episode”) can be viewed on its own terms, but the narrative deliberately distributes its steadily mounting horror and abstraction across its 13 hours. The movement toward both catharsis and disappointment is modulated by the writing and direction, and these effects are achieved by the slow amassing of narrative throughout its sprawling runtime. As an aesthetic object, Too Old to Die Young sees Refn evolving considerably as a director, doing away with shallow pastiche in favor of novel image-making, his extratextual references now offering substantive meaning. Taken as a whole, Too Old to Die Young is a summative statement on genre, aesthetics and the crumbling American psyche, delivered with a fury sublimated in neon glow. It is a major work of art.

Mike Thorn (@MikeThornWrites) is the author of Shelter for the Damned, Darkest Hours and Peel Back and See. His books have earned praise from Jamie Blanks (director of Urban Legend and Valentine), Jeffrey Reddick (creator of Final Destination) and Daniel Goldhaber (director of Cam). His stories have appeared in numerous magazines, anthologies and podcasts, including Vastarien, Dark Moon Digest, Prairie Gothic and The NoSleep Podcast. Mike’s essays and articles have been published in American Twilight: The Cinema of Tobe Hooper (University of Texas Press), Beyond Empowertainment: Exploring Feminist Horror (Seventh Row), The Film Stage and elsewhere. He is currently pursuing his PhD in Creative Writing at the University of New Brunswick. Visit Mike’s website at mikethornwrites.com.