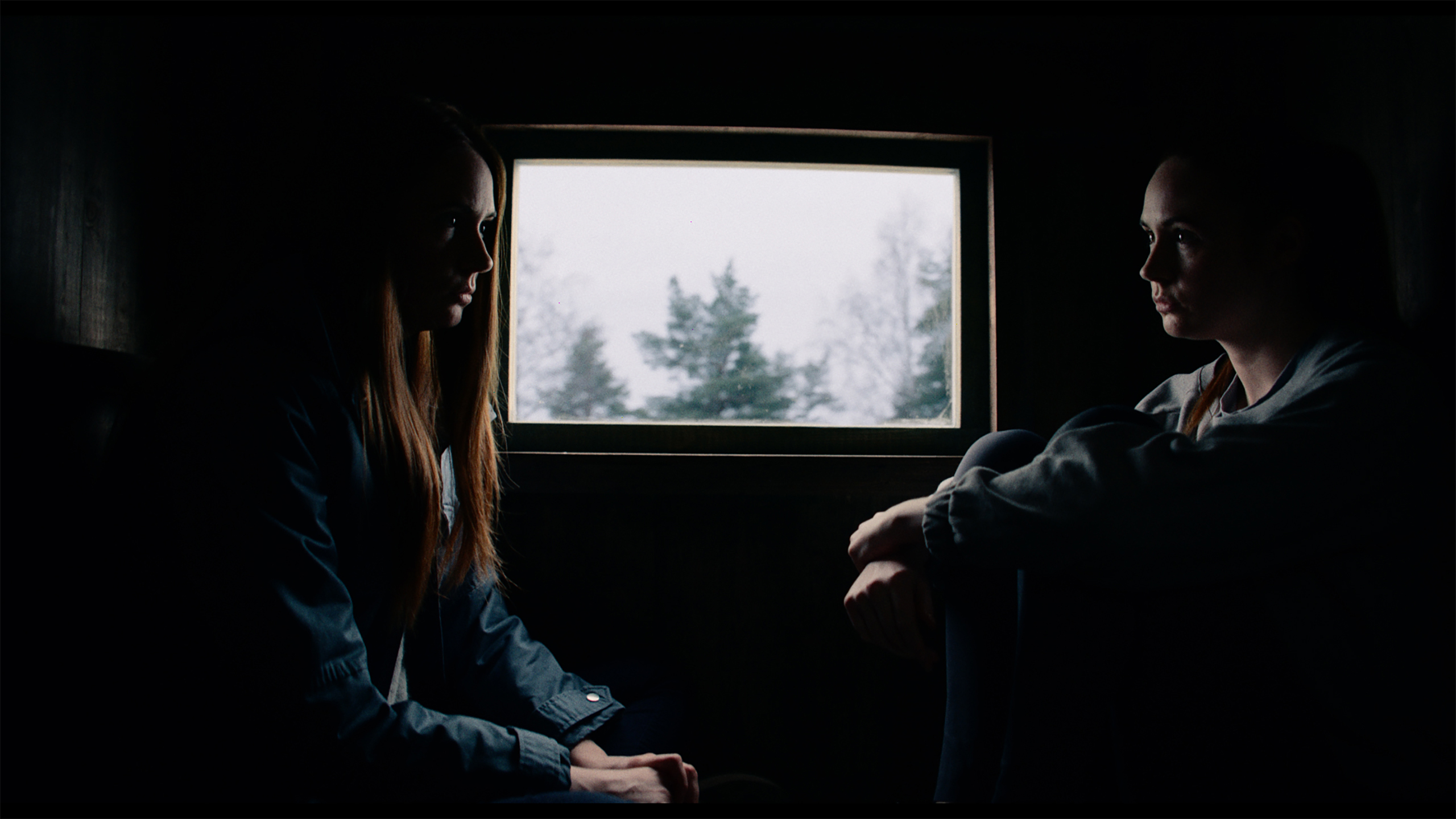 The notion that individuals are their own worst enemy is a continually prevalent one in our culture. It crops up in everything from feelings of impostor syndrome, inadequacy and self-depreciation to opposite, supposedly positive sentiments of motivation, as seen in the “hustle culture” trend which says the only thing holding you back from success is yourself. Viewing one’s self as an enemy is a foundational element of both philosophy and psychology, and thus stories on this topic continue to be relevant. On the surface, Dual, writer and director Riley Stearns’ newest film, seems to tap into these themes, taking the existential angst of Fyodor Dostoevsky’s The Double to its most violent conclusion: in the event of people and their doubles (literally called “doubles” in the film) vying for the right to live, they must duel to the death on live television. Yet Dual isn’t merely a film about a character in conflict with an arguably superior version of herself, but one that complicates such a struggle with a transfixing amount of nuance, raising questions about the things people and their doubles are fighting for.

Dual follows Sarah (Karen Gillan), a woman whose life is slowly sliding down the drain long before she’s given news of a mysterious, ultra-rare disease that her doctor is certain will kill her. At the hospital, Sarah is given the option of going to a facility that manufactures doubles for the express purpose of allowing her family and friends a coping alternative. After Sarah’s double (also Gillan, naturally) is made, the facility reveals that a manufacturing error has caused the clone to have a different eye color, and things only get worse from there. During the bonding process, the double takes over Sarah’s relationship with her boyfriend (Beulah Koale), earns the allegiance of her mother (Maija Paunio) and decides to exercise her right to remain alive when Sarah receives word that her illness has gone into complete remission. By law, both Sarah and her double must now duel to the death, spurring Gillan’s protagonist to get herself together and hire a trainer, Trent (Aaron Paul), to help her get ready for the inevitable. 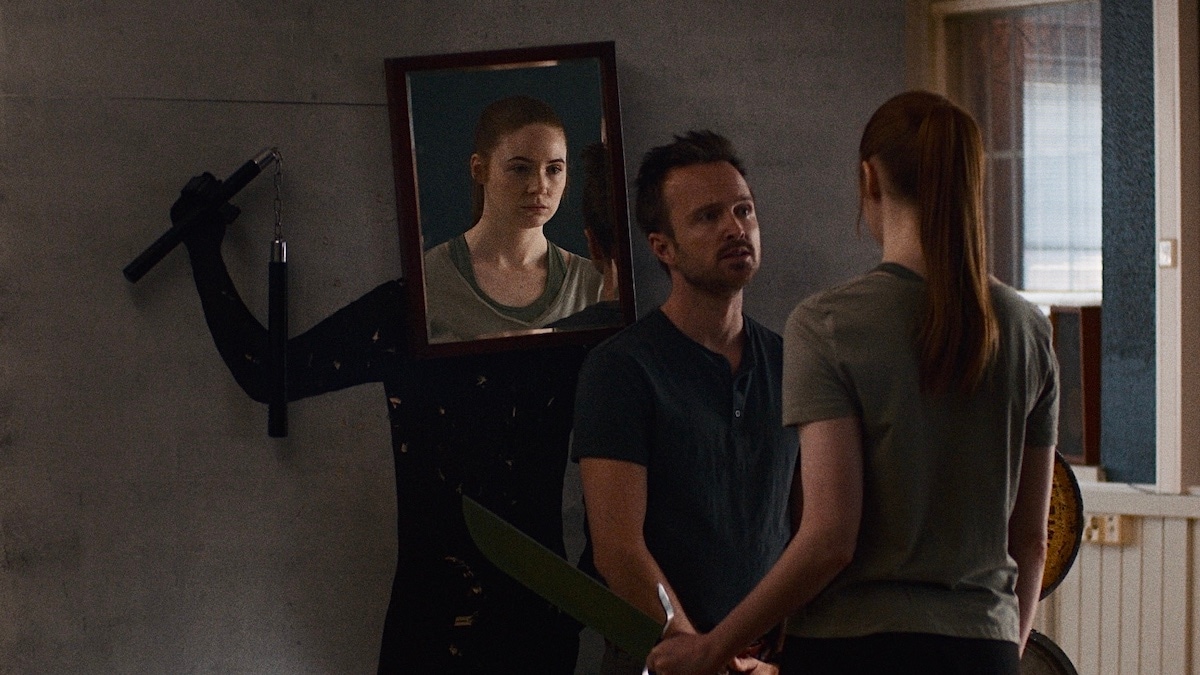 While Dual’s deadpan satire and genre trappings have earned the film comparisons to Yorgos Lanthimos, the style is unmistakably Stearns’ own, as anyone who’s seen his prior features, 2019’s The Art of Self-Defense and 2014’s Faults, can attest to. The filmmaker’s characters almost uniformly speak in an officious monotone, an affectation that allows each actor to bring out different shadings of character while keeping the world of the film both idiosyncratic and ominously oppressive. Gillan is especially good at this technique, her delivery highlighting her natural comedic timing as well as her capacity for quiet menace, the latter quality previously seen in her work as the alien Nebula in movies for the Marvel Cinematic Universe. Paul also fares well with the style, his mixture of hard-edged and kind hearted making his fight trainer credibly strong yet enjoyably quirky. Perhaps the best contribution to Dual’s offbeat tone is one that wasn’t necessarily planned from the start: although ostensibly taking place in the United States, Dual was shot for several reasons in Finland, meaning that many bit players and supporting characters have accents and rhythms that are distinctly non-American. That, coupled with the film’s locations having a telltale European look, allows Dual to feel eerily alien while containing familiar elements.

Although it can be assumed Dual takes place in the future, Stearns and production designer Sattva-Hanna Toiviainen give the movie an aesthetic which is intriguingly analog. Characters still use smartphones, messaging apps and websites as much as anyone in the present day, but the interfaces for these don’t look like an Apple or Android operating system, instead appearing closer to the now antiquated MS-DOS. This tech contrasts with the way doubles are constructed, not via any invasive methods (as Sarah verbally expresses concern over) but by a simple saliva sample spit into a tube. That touch is also indicative of the way our current COVID-saturated lives are subtly reflected in the film, with everything from that spit test to Sarah’s lonely routine of fast food and porn to the movie itself having to shoot in another country, thanks in part to lockdown restrictions, all being a nod to the ongoing pandemic. Dual never dates itself, however, and Stearns keeps the film in a nebulous sci-fi/fantasy space akin to Terry Gilliam’s Brazil (1985). 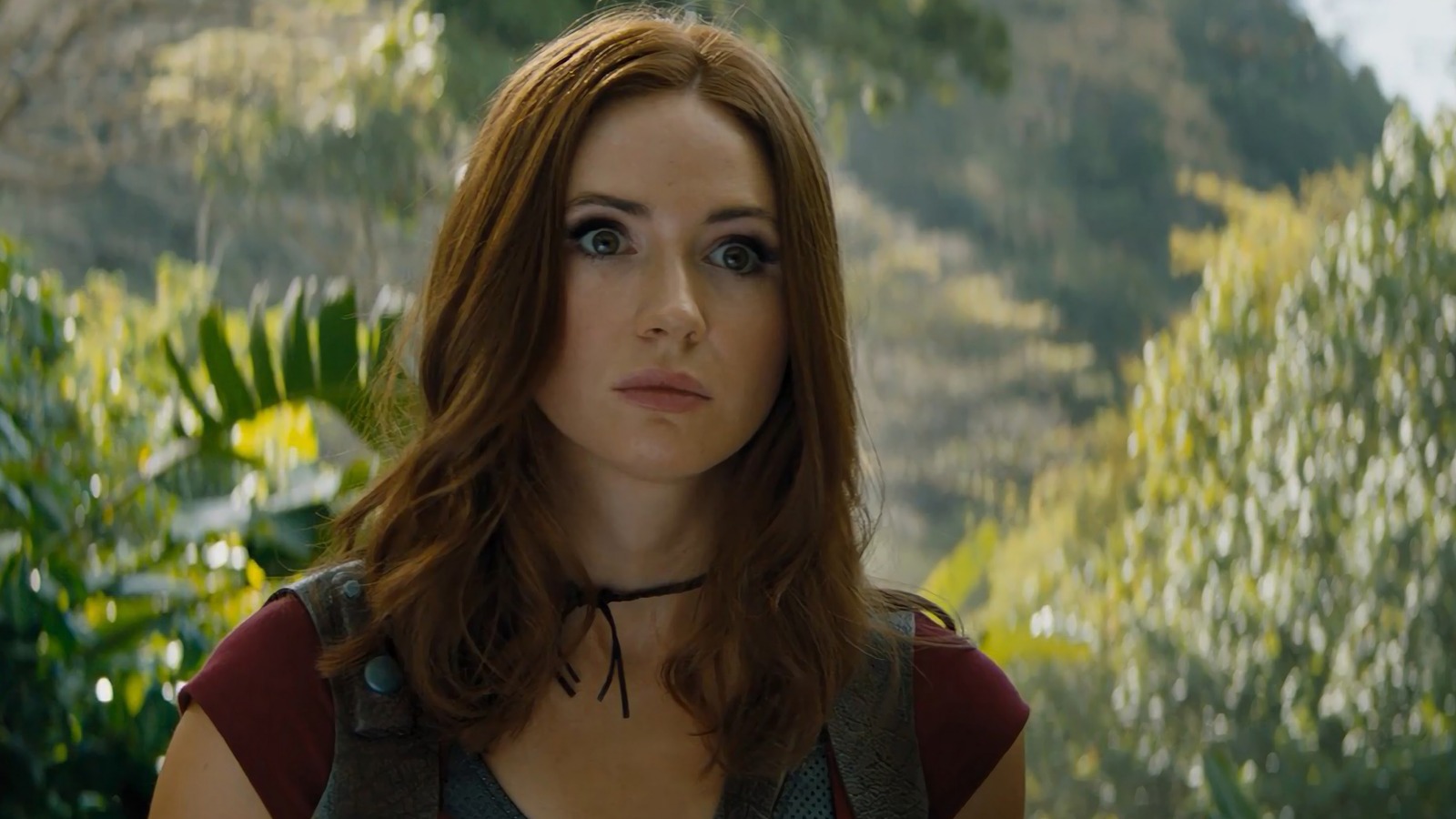 While Stearns’ comedy is frequently dark and sardonic, Dual is a bit warmer and more spiritual than the average satire, which is surprising given its subject matter. Sure, there’s the expected competition where Sarah is made to compare herself with her instantly more outgoing, attractive and successful double. Yet the bulk of the movie isn’t Sarah struggling with her mirror image, but rather a chronicle of her journey toward a kind of enlightenment. Stearns has been vocal about his study and love of the martial art known as jiu-jitsu, and as such it’s no coincidence that both The Art of Self-Defense and Dual revolve around characters taking up training to increase their mental and physical prowess. Sarah’s training is less about building hate toward her double and more about her learning to literally fight for her life. One of Sarah’s trainer’s tests involves observing an autopsy, and this encounter not only helps Sarah with her queasy reaction to blood but also reveals to her that the body is merely an empty shell, easily discarded. Dual deals with not just our natural impulse to survive in general, but with the notion of what it means to really live. After all, if we were forced to duel to the death for our own lives, it would behoove us to consider just what kind of life we’d actually be fighting for. There are likely plenty of people who could live our lives for us better than we do, and unless we’re working to change and improve ourselves then we might as well be replaced with such doubles.