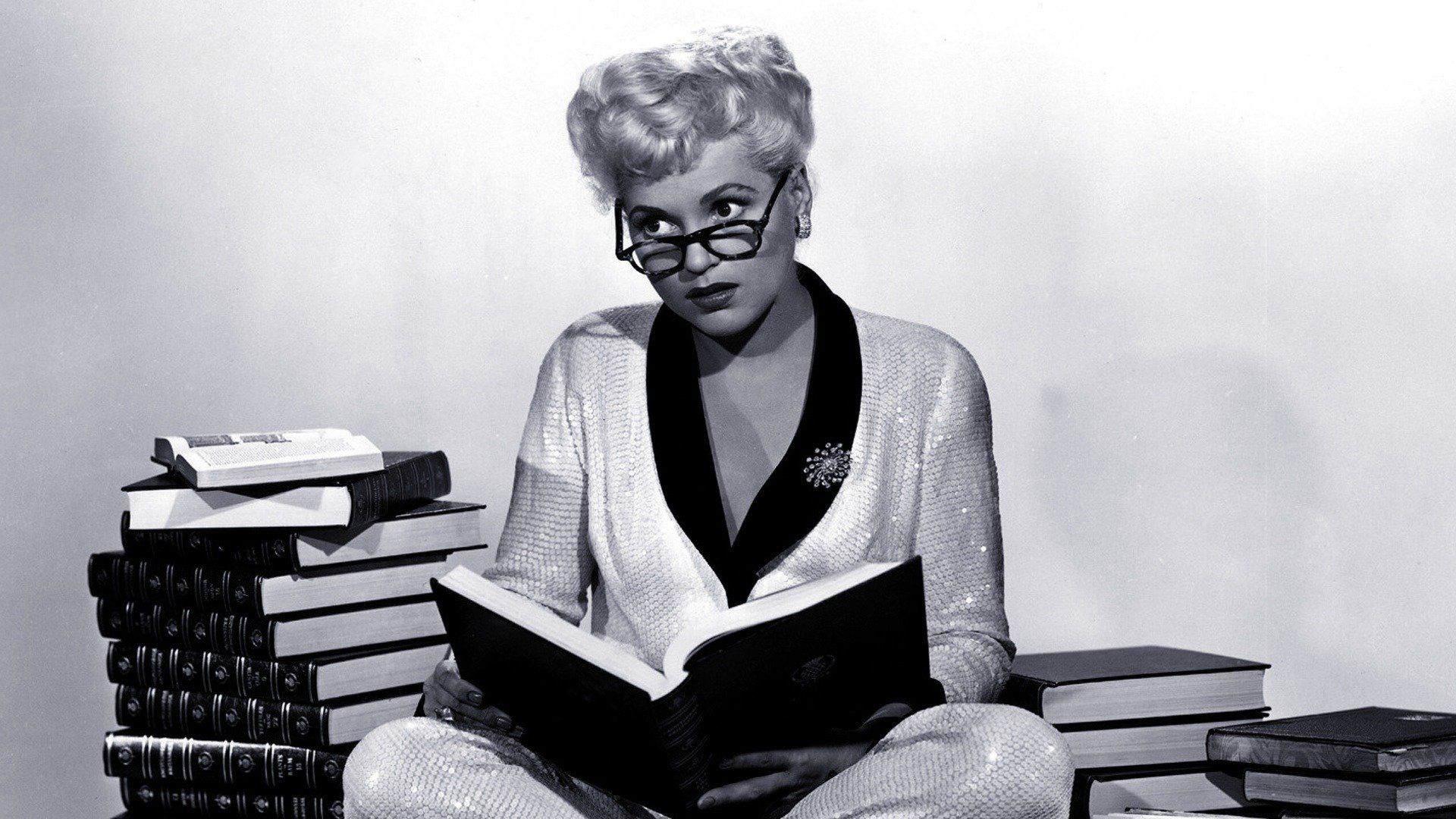 In Being the Ricardos (2021), Lucille Ball (Nicole Kidman) reserves particular scorn for Judy Holliday. When Ball is dropped from her contract at RKO, she spits that “Judy Holliday does one thing very well, but it’s just one thing.” In another scene, Ball bristles at the suggestion that Holliday belongs in the pantheon of “funny women” who are “smart, tough” and “outsmart the men,” and responds to her being spoken of in the same breath as Bette Davis, Lauren Bacall and Katherine Hepburn with a curt: “Judy Holliday? Go to hell!” Orson Welles thought otherwise — Holliday was a part of his Mercury Theatre, and Welles told Peter Bogdanovich that Holliday possessed great “humor” and “richness.” With Welles’ estimation of Holliday’s comic capacities in mind, it is somewhat unfair that she should be relegated to a kind of phantom antagonist in the mind of modern audiences via Being the Ricardos, which diminishes what she was able to achieve in such a short space of time within the industries constraints. Holliday’s persona is one of shrewdness in the face of unrelenting condescension; she perfected the art of playing the outwardly ditzy blonde who lulls those around her into taking her lightly.

This persona was set in place by Born Yesterday (1950). Holliday plays Billie Dawn, a gangster’s moll whose thirst for knowledge ends up unravelling the criminal empire of her boorish, overbearing fiancé, Harry Brock (Broderick Crawford). When Harry hires journalist Paul Verrall (William Holden) to “smooth out the rough edges” and “smarten her up” for life in Washington, D.C., he unwittingly ignites Billie’s curiosity for a world beyond the acquisitive comfort in which she has been ensconced. Billie is a perfectly conceived comic creation: Holliday delicately balances absurdity and pathos as Billie struggles under the light of comprehension. The character frequently teeters on the edge of caricature, but Holliday is able to invest her characterization with enough humanity to offset the more ostentatious flourishes the role requires. Her every gesture and utterance are unique: the way she positions her fingers when taking a drink, the inflection at the end of a sentence which throws its meaning into turmoil. These choices lend scenes a thrilling electricity, standing up to Crawford’s bombast and Holden’s poise with an off-kilter charm which speaks to the gradual synthesis of interior and exterior realities, the gentle uprising of those who fight against the tyranny of physical force.

Judy Holliday Essay: Related — Hollywood Confronts Itself: Cynicism and Self-Doubt in the 50s 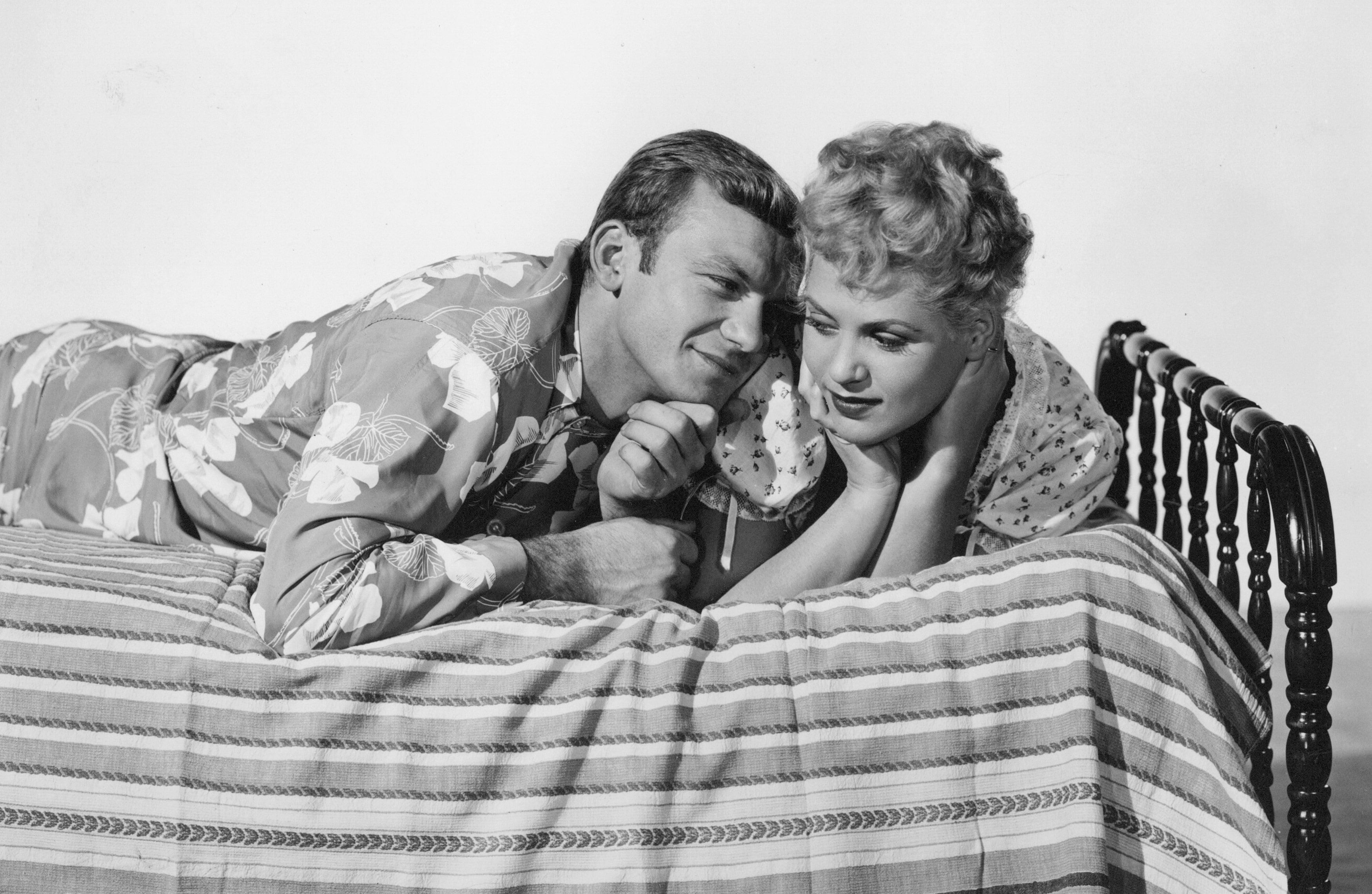 Holliday’s performance in The Marrying Kind (1952) is shorn of Billie’s outward bravado, but there are striking parallels between the former chorus girl and disenchanted housewife Florence Keefer. Holliday’s second collaboration with George Cukor and writer Garson Kanin tells the story of Florence’s marriage to Chet (Aldo Ray), as they recount the disintegration of their union to divorce court judge Anne Carroll (Madge Kennedy). Florence and Chet’s seven years together are shown in a series of extended flashbacks, narrated from Florence’s and Chet’s contrasting perspectives. The excess of Born Yesterday is tempered by a world-weariness which lends a somber tone to the Keefers’ various trials, tragedies, near misses and false starts, but this is equally a story of one’s illusions being punctured and a new consciousness emerging. The Marrying Kind is no less about compromise and revelation for Holliday’s character. Like Billie, Florence must fit herself into the expectations of her milieu; she must give up her career to become the archetypal homemaker. But there is no William Holden to serve as a catalyst for Florence, and by the film’s denouement she is reconciled to her status. Holliday brings an ease and informality to her performance which stands in contrast to Ray’s outsized macho gesturing; with seemingly effortless elan, she sets herself apart from the declamatory tenor of the period. 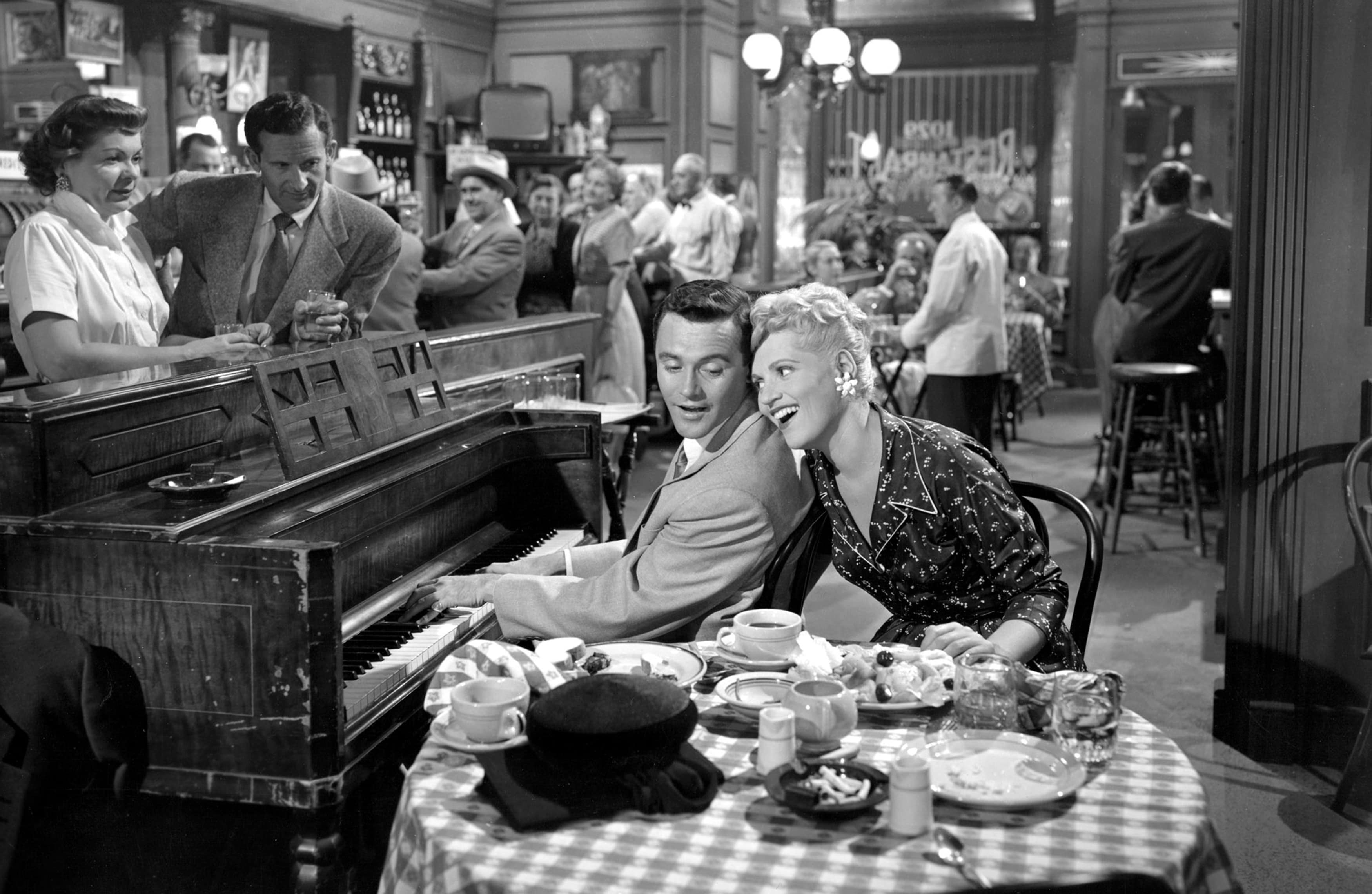 Another Cukor/Kanin production, It Should Happen to You (1954) is an incisive media satire in which Holliday plays Gladys Glover, an unemployed model who decides to spend her remaining savings on a billboard in Columbus Circle that will bear her name. “Gladys Glover” becomes a valuable commodity, and Gladys is able to leverage her way into the public consciousness as a recognized laughing stock; she is urged to “look lovable” as her unusual appeal is used to sell a variety of products. It Should Happen to You was Jack Lemmon’s first big screen credit, and his onscreen persona is already firmly in place as Pete Sheppard, a budding documentarian who serves as the flustered voice of reason in the face of Holliday’s manic exuberance. From the outset, Lemmon and Holliday were an enthralling double act. In many ways, Lemmon was the male Holliday, completing feats of comic bravura without losing sight of the character’s fundamental tragedy. It is already evident here that Lemmon and Holliday could have become one of the great cinematic pairings. Kanin’s screenplay offers a commentary on the creation of a “star,” a singular “somebody” who is hatched in the mind of the machine and packaged for public consumption. But far from freeing the sui generis subject, visibility traps them in its own condition of ownership and obligation. Kanin states that to be on display is to place oneself at the mercurial will of the market, a message that still resonates. 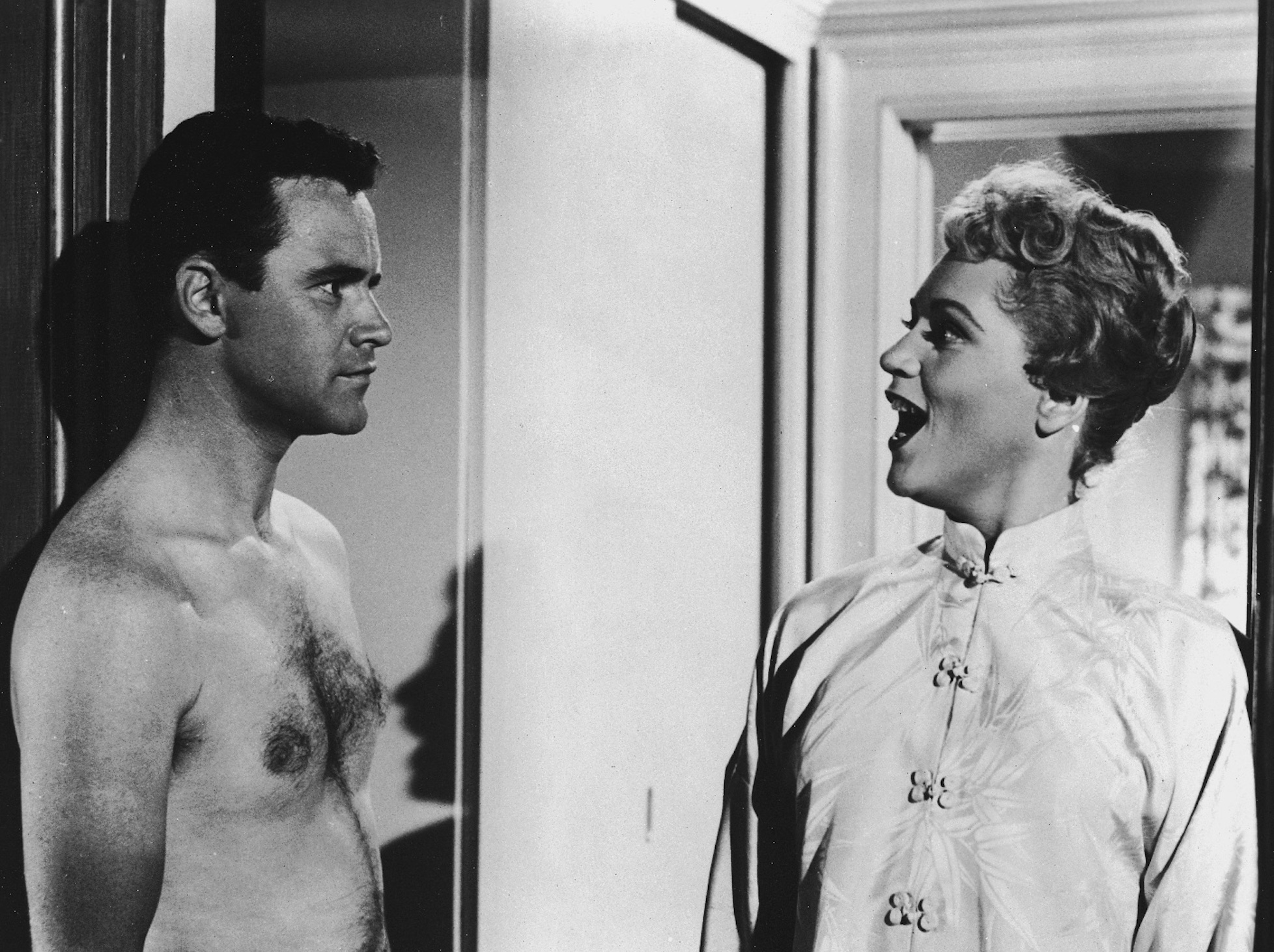 Lemmon and Holliday reunited in Phffft (1954), playing a newly divorced couple who are drawn inexorably back together as they traverse the world of singledom. Lemmon and Holliday once again display an irresistible chemistry — there are moments of sublime physical comedy, and watching them bicker as they get ready for bed is a pure joy. As an accomplished TV writer, Holliday’s Nina Tracey is everything Billie, Florence and Gladys yearn to be: a successful woman who confronts the world on her own terms. But Holliday’s performance hinges on Nina being out of her element; with her customary sweetness, Holliday sketches Nina’s bewilderment at the stratagems men employ in tracking their romantic quarry. Holliday’s performance in Phffft may be her most accomplished, harnessing the full range of verbal and physical tricks which enliven every scene. She offers a contrast to Kim Novak’s Janis — a good time girl who woos Lemmon’s guileless Robert. Novak’s presence signals the emergence of a new type of screen female: the “blonde bombshell” who projects a flagrant sexuality. Novak is bereft of the complicating creases that make Holliday such a fascinating presence. Novak flows, while Holliday flounders, and it is this friction which gives her performances another dimension. Though they had to play within the moral codes of the time, films like Phffft were at the forefront of a new sensibility: a comedy of neurosis and Wilder-esque cynicism. There is something approaching elegance in Holliday’s comic precision; she moves and speaks according to her own rhythms, defiantly at odds with the prevailing tempo.

The Solid Gold Cadillac (1956) taps into a vein of public suspicion at the corporate consensus that was assuming increasing influence over American life. Holliday takes the leading role as Laura Partridge, a budding actress and small stakeholder whose persistent questioning becomes an annoyance to the board of International Projects — who the film’s suitably cynical narrator (George Burns) makes clear: “Boy, are they crooks.” As with Born Yesterday, Holliday’s character throws everything she encounters into turbulence; she locates the vainglorious, venal core of those who have assumed the mantle of power. The joy of the film is in witnessing Laura unpick the carefully woven mythology of business doctrine with the force of her boundless enthusiasm and scandalous candor. Laura functions as a Capra-esque minnow, an unassuming activist who marshals popular energy in challenging and unseating corrupt, profligate and inept authority. One can see how Laura’s struggle to be taken seriously would resonate with Holliday — she takes on the boy’s club at the top, is underestimated at every turn, but is possessed of a unique tenacity, and is determined to be addressed on equal terms. Holliday elevates some uninspired material with her impeccable comic vivacity and geniality; the role offers a distillation of her gifts, the irresistible bulldozer who smashes through the established codes and conventions of the world around her, batting her eyelids and smiling innocently. The Solid Gold Cadillac is a bittersweet reminder that Holliday had years as a comic lead in front of her. 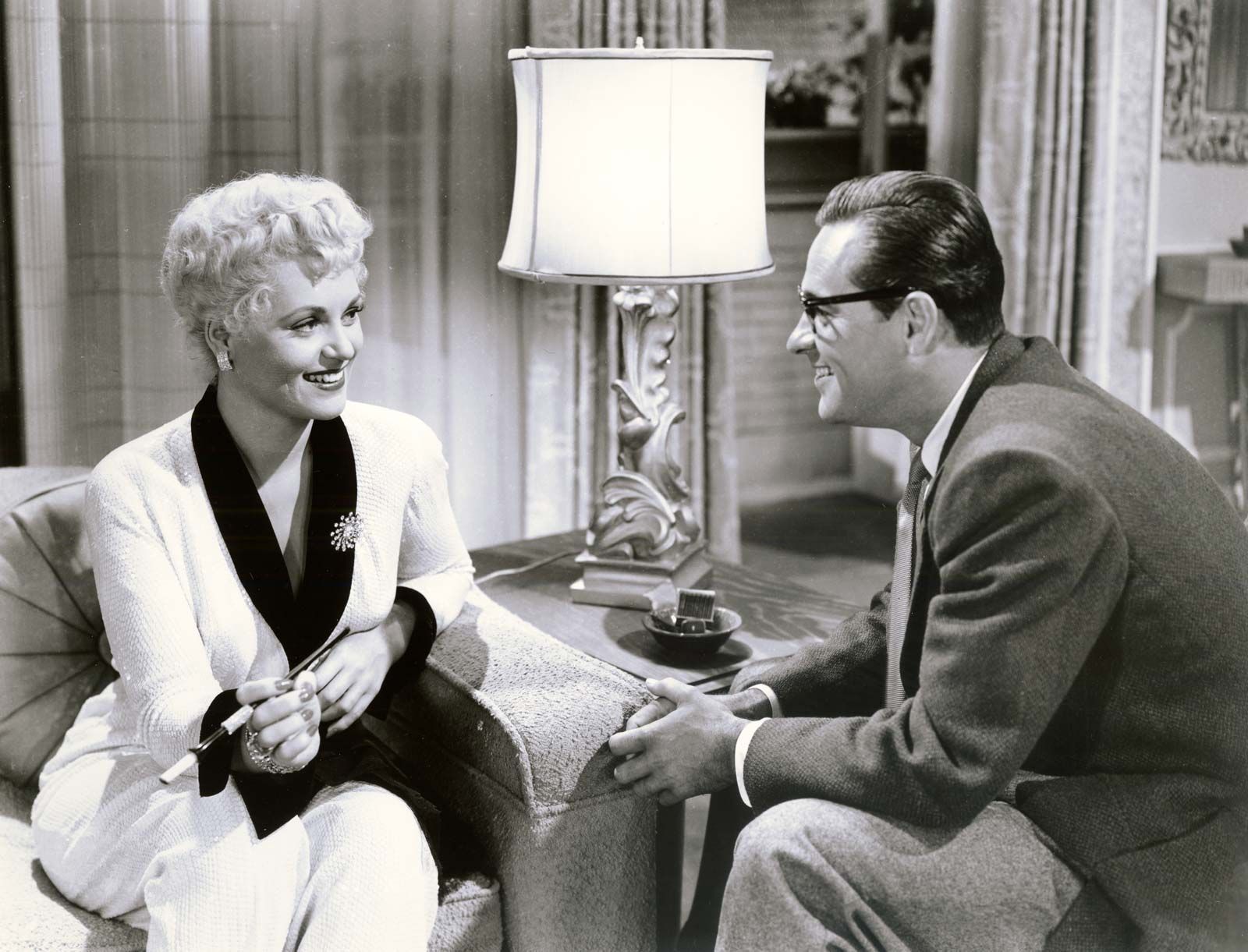 Holliday was underserved in Full of Life (1956) as the dutiful wife to Richard Conte’s struggling writer (a surrogate for the screenplay’s author, novelist John Fante). Playing expectant mother Emily Rocco, Holliday is told by her husband, Nick, “You gimme the babies, and I’ll give you the books,” while dabbling in Dianetics and a host of other theories. Emily admits to her devoutly Catholic father-in-law that “I haven’t been anything,” and confesses to Nick that she feels “suspended” in something whose dimensions she cannot fathom. There is something approaching existential hysteria to Holliday’s demeanor throughout Full of Life; she is more shrewish than winsome as she finds herself constrained within the domestic register, coming to represent the pram in the hall that is haunting her husband’s creative prospects. Emily witnesses a vision of the future in her long-suffering mother-in-law, trapped on the treadmill of traditional values, and finds her remonstration that “I’m a lot of things, more than a wife” ringing increasingly hollow as she falls almost unconsciously into her designated role, acceding to the demand from Nick’s parents for a Catholic wedding service (Emily and Nick’s Las Vegas ceremony is dismissed as illegitimate in the eyes of God). Thankfully, the Holliday bulldozer was back in full effect for Bells Are Ringing (1960), ready for a final, riotous swing. 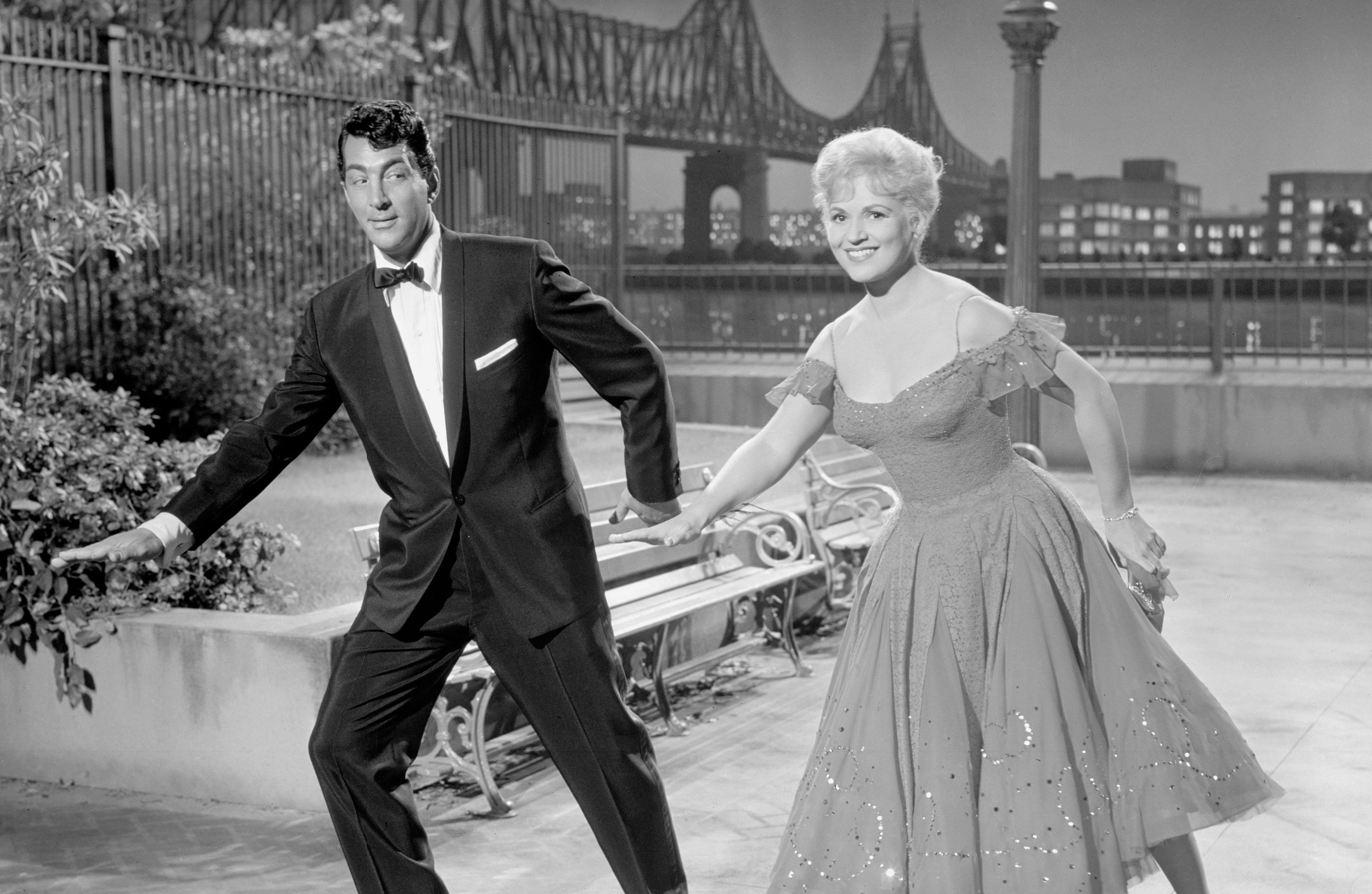 Bells Are Ringing is a lush Minnelli musical in which Holliday plays Ella Peterson, a voluble switchboard operator for Susanswerphone, a telephone answering service. Ella can’t help entangling herself in the lives of Susanswerphone’s subscribers; she is particularly fond of Jeffrey Moss (Dean Martin), a dissolute playwright suffering from a severe case of writer’s block. Holliday’s klutzy appeal is brought to the fore with inspired moments of slapstick, but she also proves herself to be an accomplished musical performer with a warm, forceful signing voice. In hindsight, Bells Are Ringing is a summation of Holliday’s standing as one of the great onscreen facilitators; she was always a tremendously generous performer. Like Ella, she works to open up possibilities and empower those around her, raising the material and her co-stars without overwhelming a scene. Regardless of the role, Holliday was capable of clearing a path to a more audacious comedic course, beckoning those around her to play along and share in her joy. We were robbed of seeing Holliday mature. She died in 1965 from throat cancer. She was only 43. Holliday always felt like she had gained access to a modern sensibility. Where so many around her were content to emulate what had gone before, Holliday was able to tease out something unusual with the choices she made in her characterization, grounding it in human frailty. The most remarkable thing about what Judy Holliday left behind is how familiar her characters feel; their echoes can be felt across generations of performers who were thunderstruck by that bulldozer.

Judy Holliday Essay: Related — Of Love and Other Demons: ‘House by the River’