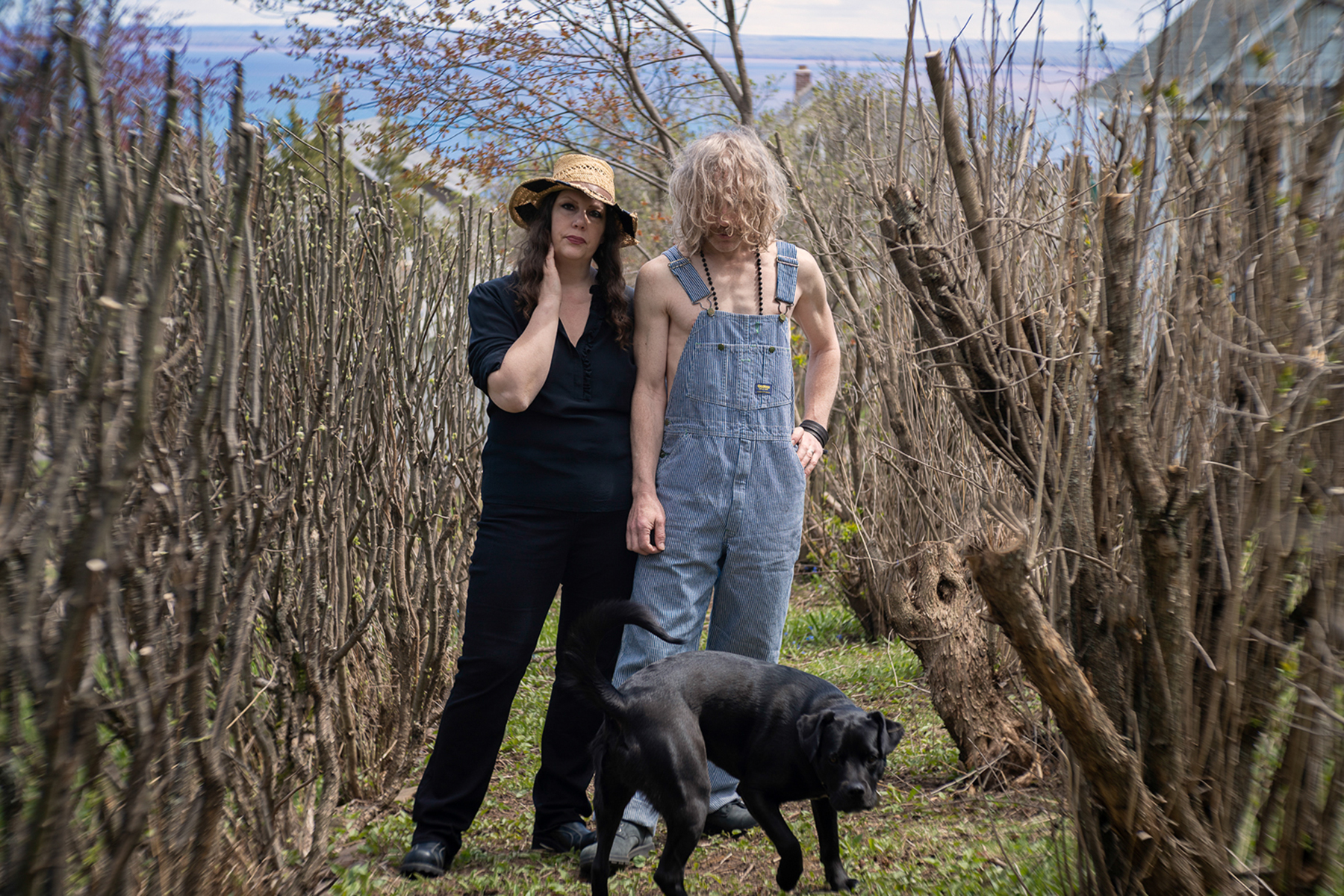 This Low essay covers the discography of Alan Sparhawk and the late Mimi Parker. Check out the VV home page for music reviews and complete soundtrack song listings.

“I don’t need a laser beam / I don’t need the time / Leave me in the car tonight” Mimi Parker sings on “Laser Beam,” a standout track from Low’s 2001 masterpiece Things We Lost in the Fire. Twenty-one years later, Parker is tragically no longer with us after losing her battle with cancer, leaving a gaping hole in the modern alternative rock music scene. It is a hole that she and her Duluth, Minnesota-based band, founded with husband Alan Sparhawk in 1993, filled with their luminous, gently transcendent music across 13 studio albums. The couple did not “need a laser beam” because their music naturally was and is one.

Just as “Laser Beam” puts Parker’s vocals front and center rather than Sparhawk’s (though they often alternate as lead singer), Low’s music in general contains multitudes despite being built from so little. The band’s minimalist and hypnotic rock, slowcore or dream pop (however it is best defined), sounds like it has been made in a vacuum, but where they are sonically tight and restrained, Low also constantly leans out and beckons to their audience. Parker and Sparhawk’s harmonies sound like they are being whispered into the listener’s ear, with a beam of light shining through the cracks of the duo’s vulnerable, delicate sound.

Even though Low’s early and mid-career output is led by guitar and percussion, it’s resistant to the expectations of noise or chaos that might come with the rock genre, which the band’s sound constantly orbits, even if this alone is not a conclusive designation for their elusive, singular style. Low’s 2021 album HEY WHAT, however, expanded their growing interest in glitchy electronics and increased volumes. Their 2007 album Drums and Guns begun to swap the spare for the strange, and 2018’s Double Negative took their increased use of distortion and oblique lyrics to new levels. As the critic Andy Cush wrote when reviewing HEY WHAT for Pitchfork, the release may have continued the band’s “push deeper into abstraction,” but in doing so was “finding fresh angles on the themes that have animated them since the beginning.”

These themes include love, loss, longing and anguish. From Low’s debut album I Could Live in Hope (1994) to HEY WHAT, through Things We Lost in the Fire and other memorable projects such as Drums and Guns, Ones and Sixes (2015) and Double Negative, Parker and Sparhawk’s music has transformed the privacy and personality of these themes into universality and community. HEY WHAT highlights such as “Days Like These” and “More” mine the specific point of transition for this articulation — that is, they are constructed around the explosion of sound that comes when the silent becomes spoken, when the suppressed is released, when I becomes we. Other tracks on the album like “I Can Wait” and “All Night” recall the gentle build of the classic “Sunflower” (from Things We Lost in the Fire) or the mesmeric, circular “Lullaby” (I Could Live in Hope).

Low Essay: Related — A Reductive Montage of Love: ‘Meet Me in the Bathroom’

Parker’s indelible contributions to music survive her, and it is hard not to turn to Low’s stirring, cathartic songs as solace while the band, fans and industry come to terms with the magnitude of the loss. HEY WHAT is as predictably generous, moving and comforting as the best Low albums, but it also sounds like it has come from another planet. Like epoch defining works such as The Velvet Underground & Nico (1967) and Kid A (2000), HEY WHAT sounds as if it is beaming the listener up, elevating the difficulties of their everyday heartbreak and melancholy and making these experiences otherworldly, in order to move towards resolving them.

Like the aforementioned Velvet Underground and Radiohead albums, Low’s most recent (and probably last) project sounds like the future, but also offers their listeners everything they need to hear in their respective present moments — whether these moments were last year, as the music world mourns Parker’s passing today, or mark an as yet unspecified date in the future. In that future, the vital catalogue of work that Low has given their listeners will once again be there to pick them up — to tell them that they are not alone, and show them that there will always be beauty after the suffering. This is the restorative power of Parker and Sparhawk’s music. It elevates its listener, even if this elevation begins modestly with one being able to stand upright rather than running up a hill with Kate Bush or dancing across a stage with Mick Jagger. “Leave my weary bones / And fly,” Parker sings on “Fly’ (another Parker-led song from Double Negative), which almost seems to be Low’s dictum. Their songs return time and time again to this understanding: after standing, with work, comes flight.

Low Essay: Related — Both the Sum and the Parts: Black  Country, New Road’s ‘Ants from Up There’

HEY WHAT seems to most directly outline the obstacles in the way of flight. The immediately crashing guitars of “More” are cut through by the desperate, shared vocal delivery of Parker and Sparhawk. The track is a slender two minutes and 10 seconds, yet it is an instant crescendo, becoming a process of stripping back from this to find, well, more. ““Days Like These” also rejects traditional verse-bridge-chorus song structure, beginning with a wall of sound that the lyrics “When you think you’ve seen everything / You’ll find we’re living in days like these” pose a challenge to. Throughout the track, the title lyric competes with wild instrumentation by declaratively making the music catchy.

Low Essay: Related — Making Sense of the Bullocks: Examining the Punk Unpleasantries of ‘Pistol’ and ‘Sid and Nancy’

The lasting effect of Low’s music has never been more present than on HEY WHAT. The album’s mid-point — the spellbinding, Parker-led “Hey” — literalizes this, providing what feels like two songs in one, shifting into a more ethereal gear halfway through its over seven-minute runtime. Similarly, album opener “White Horses” supplies a jarringly constant march towards a chorus that never comes; Parker’s soprano meets Sparhawk’s voice after his has a few seconds of a head start, but she then carries on after his has finished each time the vocals come in. “White Horses’ does at a micro level what the album does in general, confirmed by the way the track’s outro is effectively the beginning of track two, “I Can Wait.” The official track change only happens when the new set of vocals comes in, but the song ironically begins anyway, even if the track list suggests otherwise. HEY WHAT constantly does this, letting sound spill over the edges of its containers, letting it divert from expected arrangements, letting it tear down self-imposed sonic barriers of choppy, unpredictable rhythms and break on through to the other side.

This is Low’s magic trick: what sounds as if it has been made in a vacuum is persistently breaking out of containers. What sounds like two people in a confined space filling noise with their love and their lives goes beyond personal experience. Parker’s drumming and voice are irreplaceable components of what makes Low tick, but the music is not going anywhere. “Don’t walk away,” Parker and Sparhawk sing on the eponymous track, “I have slept beside you now / For what seems like a thousand years” they continue, which works as a metacommentary reminding the fans and industry of how far Low has come. On one hand, things may have completely changed now that Parker has sadly passed away… but on the other, Low’s music will always continue to sleep beside its listener, share a room with them or find other ways to ensure that they are not alone. Low will do this for another “thousand years,” at least.