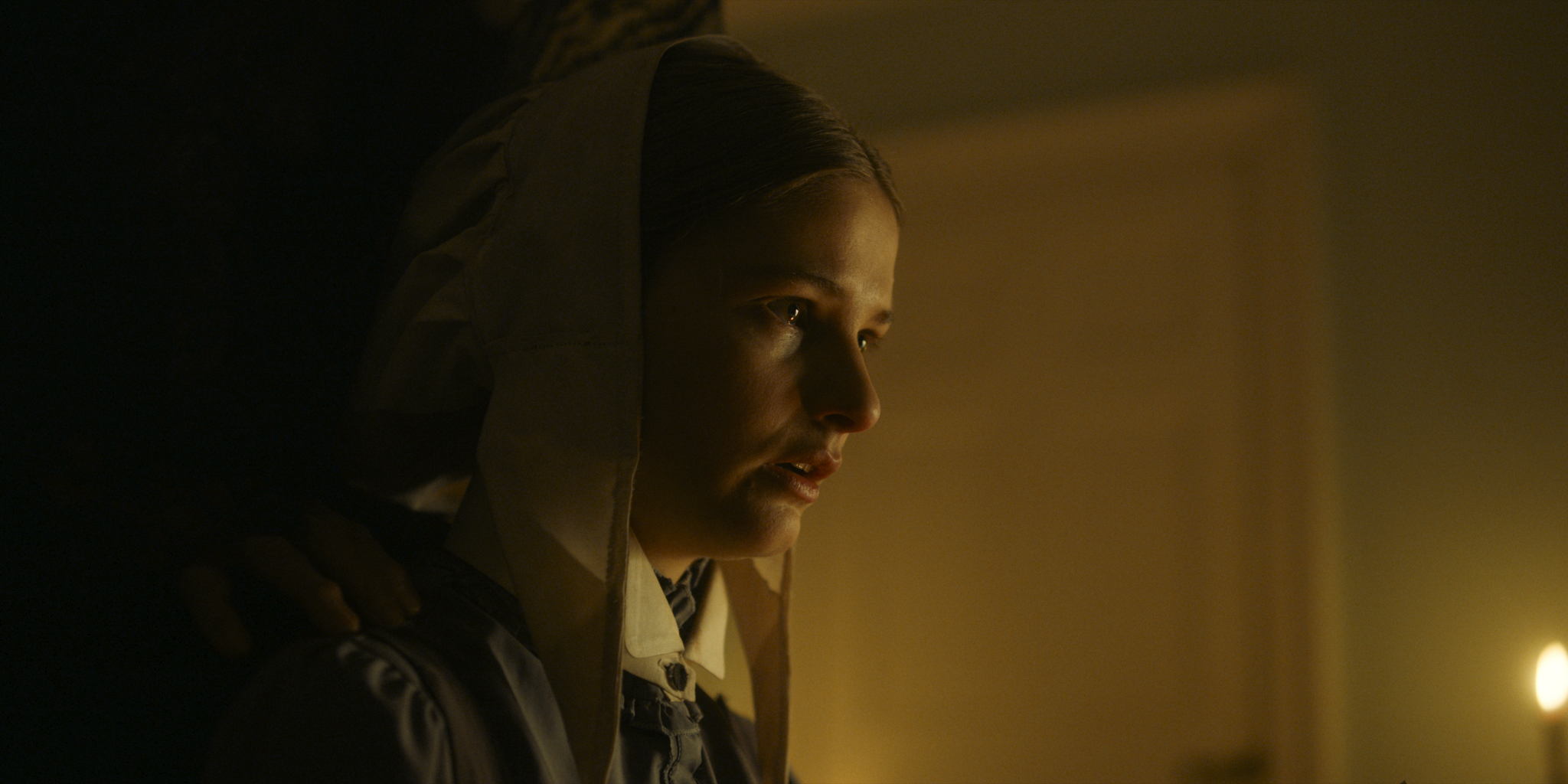 Writer-director Edoardo Vitaletti aims high with his debut feature, The Last Thing Mary Saw. Set in 1843 and dealing, predominantly, with a lesbian love affair and the ensuing carnage caused by some kind of supernatural disturbance, the movie immediately draws comparisons to another attention-grabbing horror debut, Robert Eggers’ celebrated 2015 film The Witch. Unfortunately, while that movie drips with suspense and instantly situates viewers in its chosen time period, The Last Thing Mary Saw struggles to create any real sense of time or place. Everyone is dressed like they’re puritans, but it’s almost two centuries after the Salem Witch Trials, while the thoroughly modern slant unfortunately evokes the risible Fear Street: Part Three – 1666. The 2021 Netflix slasher falls victim to many of the same problems, but at least the audience can see what is going on.

The Last Thing Mary Saw opens with a young woman, the titular Mary (Stefanie Scott), on trial for killing her mother. Sat stoic yet defiant, with a blindfold covering her bloodied eyes, this makes for an arresting image, as Mary’s period dress is evocative of a time when women had far less power and agency. The setting is rural New York, and although Mary is seemingly responsible for at least one death, the ruling magistrate is more concerned with the young woman’s romantic dalliances with the family maid, Eleanor (Isabelle Fuhrman). These two indulged in what Mary’s hilariously creepy grandmother describes in the first of many flashbacks as “abominable behaviors.” Mary’s mother, meanwhile, intones gravely, “They long for one another’s touch.” These two lines of dialogue alone should give some indication of how ripe and expository the writing is. Characters speak as though delivering lengthy sermons, while spotty and difficult to place accent work makes it tough to ascertain where anybody is supposed to be from. 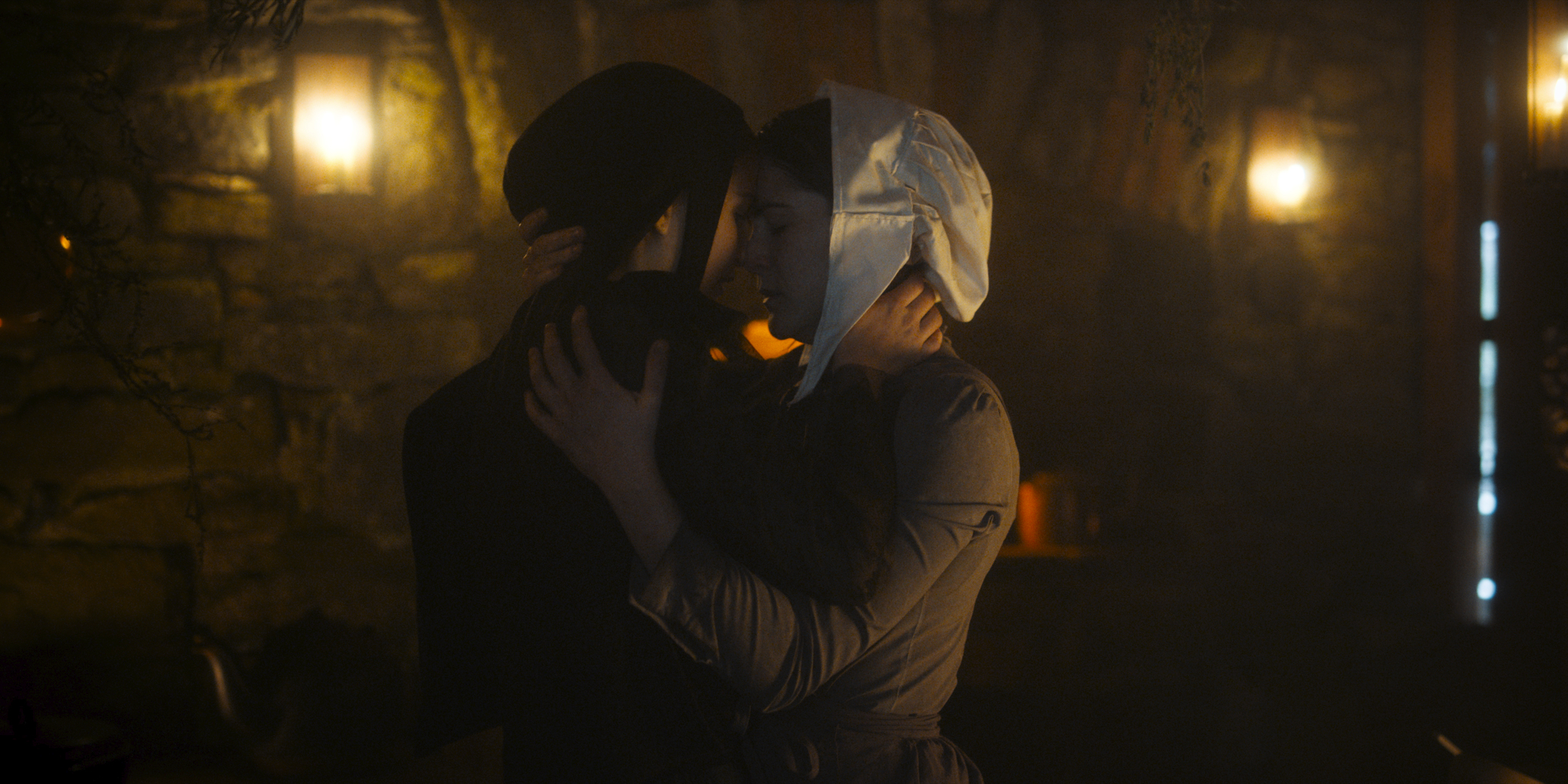 Worse still, there’s a tendency for characters to make grand, improbable proclamations about their stations in life, with one particularly jarring line about how “fear and weakness keep us here, not devotion” standing out as an instance when showing rather than telling would have made much more of an impact. Stronger are the scenes when Mary’s younger brother — a nosy brat who suffers a splinter to the foot that Mary carefully extracts, in a moment of well-executed body horror that will have Dr. Pimple Popper fans cheering — watches her being punished through a crack in the door. Later, he simply waits outside, unable to even bear to see that much anymore. It’s clear that everybody in The Last Thing Mary Saw, men and women alike, is living in a constant state of fear, guilt and shame. But there isn’t enough of an effort made to justify the central romance so that it makes sense for Mary and Eleanor to consistently tempt fate and inevitably land themselves in trouble. The characters barely even kiss in the queer love story, and there’s sadly little chemistry between the two actors.

The framing device, surrounding Mary’s mock trial, is clunky at times, with scenes essentially theorizing about what happens next before quickly cutting back to the flashback. Likewise, chapters are nearly always unnecessary, given how they tend to disrupt a film’s flow, but their inclusion in The Last Thing Mary Saw is particularly strange since there are only three and they’ve got ridiculously solemn titles such as “A Monstrous Birth,” which refers to Rory Culkin, whose cameo is one of the strongest elements in the entire film. Credited only as “The Intruder,” Culkin appears briefly as a man with a facial scar who sexually assaults Eleanor in a kitchen (the point is that men are very bad and exist only to harm women, you see). Elsewhere, he acts convincingly mysterious while his whole head is wrapped in a big scarf/makeshift balaclava, with only a single eye visible. It’s another terrific performance from Culkin, who brings a frisson of that dark Scream 4 energy to an underwritten role. 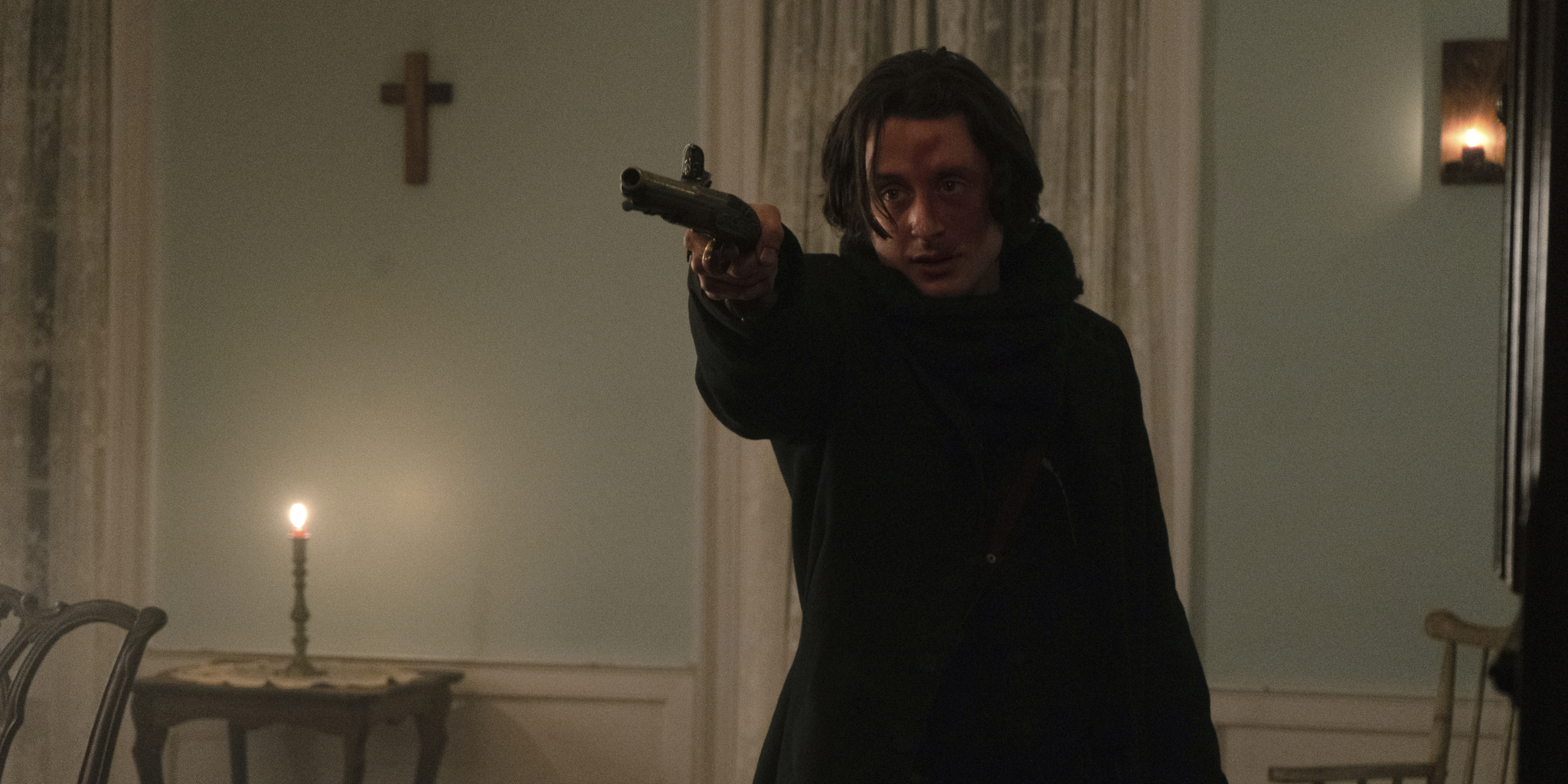 The Last Thing Mary Saw is languidly paced, and certain scenes are lit so dimly that it’s difficult to see what’s going on. This was likely a deliberate choice, much like the awkward dialogue, meant to invoke the feeling of a different time. Unfortunately, it has the opposite effect, reminding the audience that they are watching a production rather than being fully enveloped by it. The story is pretty one-note, too, with no discernible highs or lows. The characters are all devoutly religious and disapprove of Mary and Eleanor’s relationship, but they refuse to give it up, which leads to increasingly wearisome punishments. At one point, Mary’s clearly evil grandmother uses her vague supernatural powers to enact a fate worse than death on Eleanor. She’s left with a gaping hole on each side of her neck, and the sounds of Eleanor struggling to breathe as a result are among the only times The Last Thing Mary Saw truly commits to being a horror movie. Otherwise, it’s rote and repetitive, a dull drama in period dress that never fully connects. The fact that viewers know Mary’s fate doesn’t help matters of course, robbing the story of the necessary tension to keep the audience invested through the quieter moments.

It’s a shame, because the performances in The Last Thing Mary Saw, especially from Stefanie Scott as Mary and Isabelle Fuhrman as Eleanor, are strong. Both actors give it their all, considering neither character is especially well-drawn. They’re both defined solely by their relationship, which itself doesn’t make a whole lot of sense — how long have they been involved? What initially drew them together? Why are they so committed to each other that they’re prepared to sacrifice their lives? It’s almost as if Vitaletti took it for granted that two queer women would be attracted to each other once they existed in the same space and forgot to add anything further. There’s no real danger to the couple’s interactions, which seem to take place in full view of anybody who might be strolling past. Moreover, it’s unclear why the two of them don’t just, as Eleanor suggests about an hour into The Last Thing Mary Saw, run away together rather than continuing to live in this misery. And yet, the harshest thing that’s done to them, up until the neck incident, involves both women being forced to kneel on rice for lengthy periods of time. Surely, current conversion therapy practices are worse? 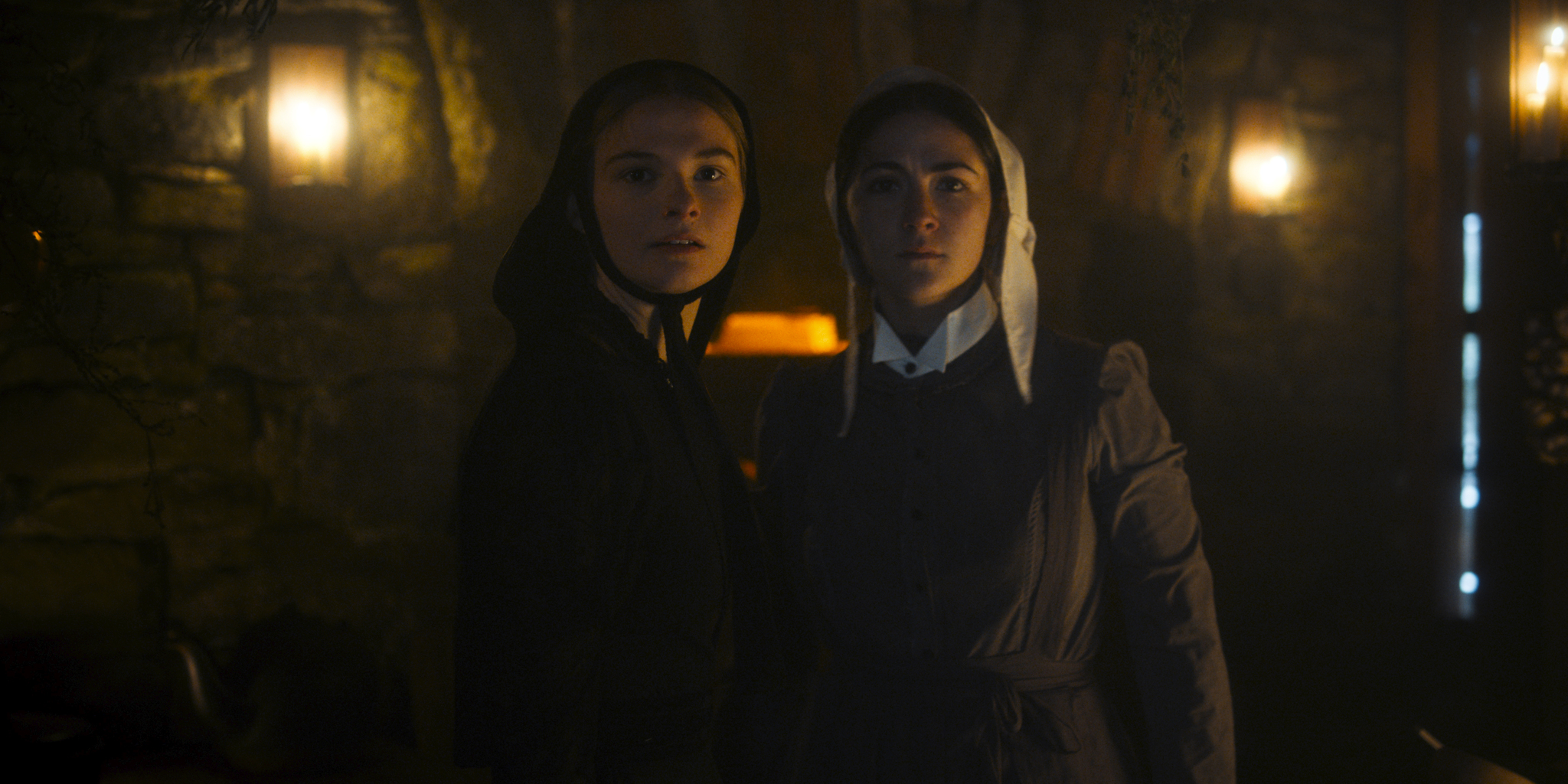 Considering that religious fundamentalists continue to persecute gay people, it’s shortsighted to present a story like The Last Thing Mary Saw with such little concern for the current real-life ramifications of being queer. There’s quite literally nowhere for either character to go, no path to growth or enlightenment, only inevitable destruction. There isn’t even any attempt made to justify their different social standings, nor how weird it must be for Eleanor to wait on her lover. Unfortunately, The Last Thing Mary Saw ends up feeling like little more than mimicry, both of more impactful LGBTQ stories and of films like The Witch, which utilize their period settings for scare appeal and intriguing drama rather than just set dressing.