A Star Is Torn: ‘Martha Marcy May Marlene’ at 10 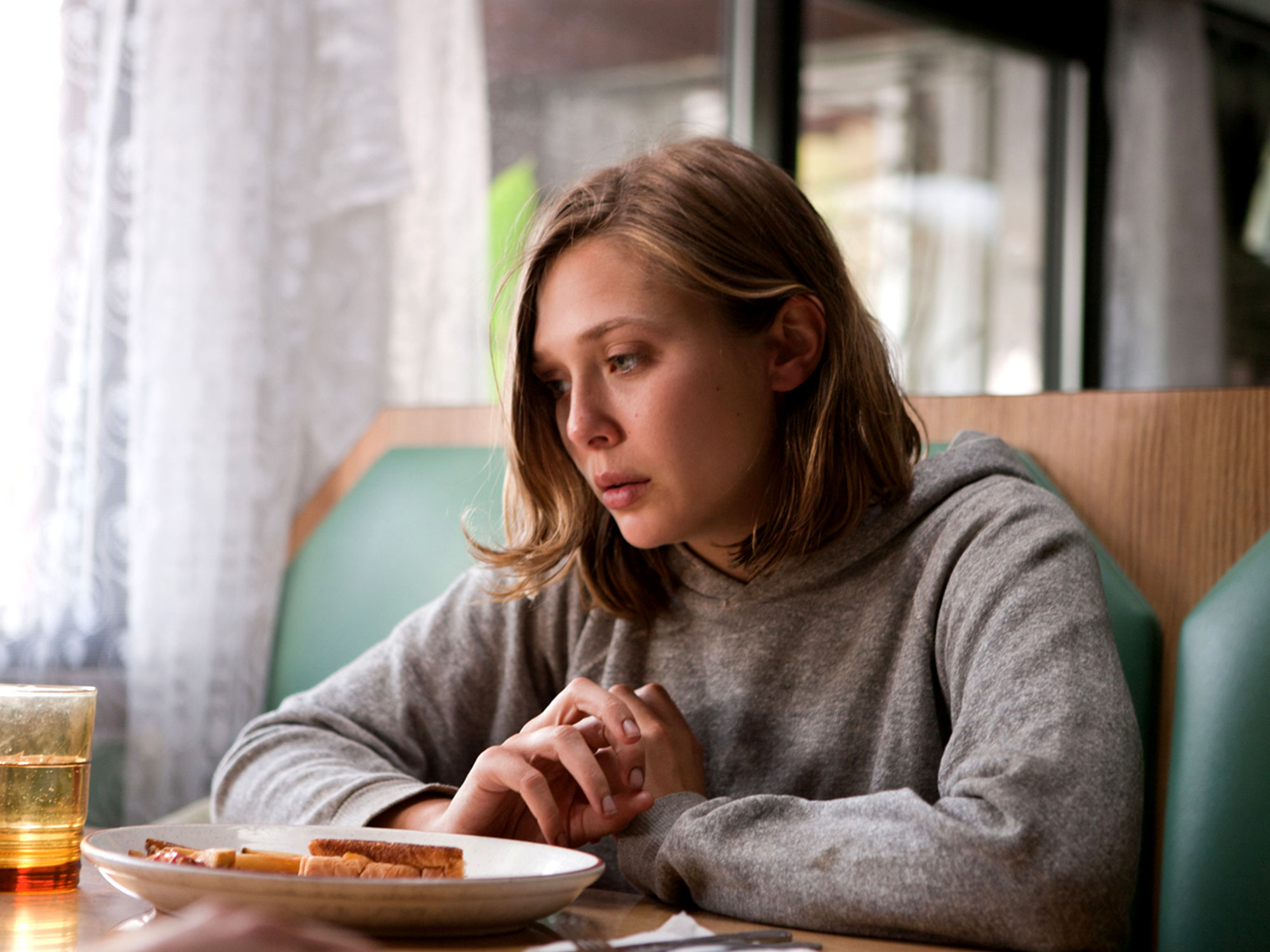 These days, Elizabeth Olsen is most well-known for playing Wanda Maximoff, aka Scarlet Witch, across multiple MCU movies as well as in hit TV spinoff WandaVision. While reflecting about her debut performance in Martha Marcy May Marlene, it feels disappointing that such a gifted performer got sucked up by the Marvel machine. Sean Durkin’s quiet, eerie little film, released just a few short months before Olsen’s other major breakout role, in the horror remake Silent House, is built entirely around her astonishing performance. The titular character, a lost young woman fleeing a cult whose psyche has been irreparably damaged by her experience, is a flawed, at times even unlikeable person. A million emotions play across Olsen’s face at once — grief, anger, confusion, wariness — and she deftly handles them all without breaking a sweat or resorting to melodramatics.

The camera clings to Olsen in Martha Marcy May Marlene, often focusing on her character’s reactions to others who speak offscreen, solidifying her place at the center of the story. Martha is quiet and unassuming almost to a fault, which goes some way towards explaining how she got sucked in by an abusive, misogynist cult in the first place. The very first shot of Olsen finds her dutifully setting a table. Just moments later, Martha flees the compound, through the trees, while being pursued by another cult member. The use of a handheld camera puts the audience in Martha’s shoes as she makes a heart-pounding bid for freedom. It’s notably the only time Martha Marcy May Marlene is shaky and urgent. Durkin, in his feature debut, avoids the typical hallmarks of a cult-themed movie. The scariest moments in his film are also its quietest. Durkin plays in the space between horror and real-life drama, emphasizing the normal and everyday nature of the abuse. Most of the action takes place in stark daylight, too. 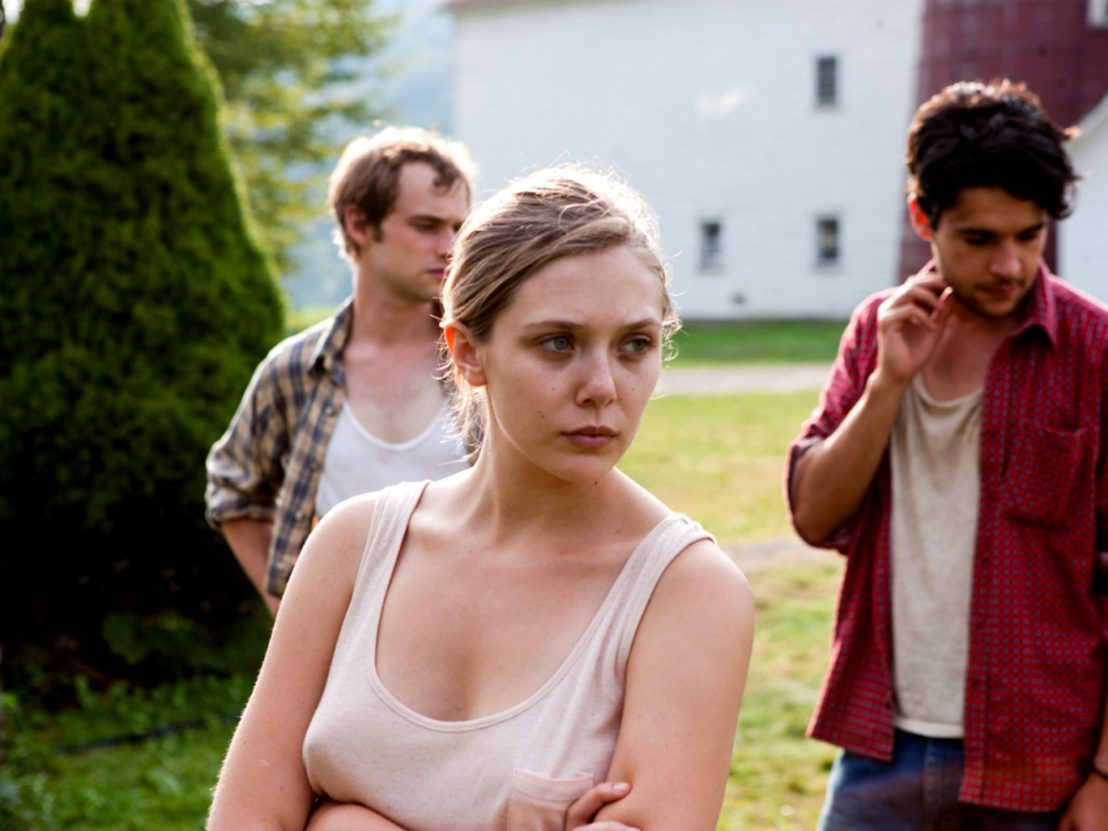 There’s little exposition in Martha Marcy May Marlene, with the protagonist never clarifying what really happened to her, either because she can’t face the truth or, as a late-night phone-call suggests, because part of her secretly yearns to return to her old life. The farm, run by a calculating, quietly menacing leader named Patrick (played with narrow-eyed intensity by John Hawkes), promises an idyllic life away from the stresses of the modern world. In reality, it’s a place where women are essentially slaves, forbidden from eating before the men and tasked with providing Patrick with male heirs — “he only has boys,” as Martha tells a prospective cult member named Sarah, played by fellow newcomer Julia Garner. Their living quarters are cramped, and group sex is encouraged, but Patrick is so wiry and skinny that he’s dismissed as wholly unthreatening. It’s only when a drugged Martha awakens during a sexual assault that she realizes what Patrick is truly capable of. And yet, when the time comes for him to violate Sarah, Martha encourages her just as she was encouraged.

Martha isn’t a saint; she has wronged and been wronged in equal measure. But since Durkin chooses not to provide viewers with an easy answers, never mind a full breakdown of the protagonist’s backstory, he presents Martha utterly without judgement. Scenes in her big sister Lucy’s (a brittle Sarah Paulson) house — a stunning, modern property with far too many windows for Martha’s liking — bleed effortlessly into flashbacks to the farm, emphasizing how certain objects and actions kickstart memories. The question of whether Martha is truly being stalked, or simply suffering the effects of debilitating PTSD, is left opaque right up until Martha Marcy May Marlene’s haunting closing moments, which suggest that the title character is indeed being pursued and maybe even welcomes it, the beginnings of a tiny smile playing across Olsen’s lips as the film fades to black. 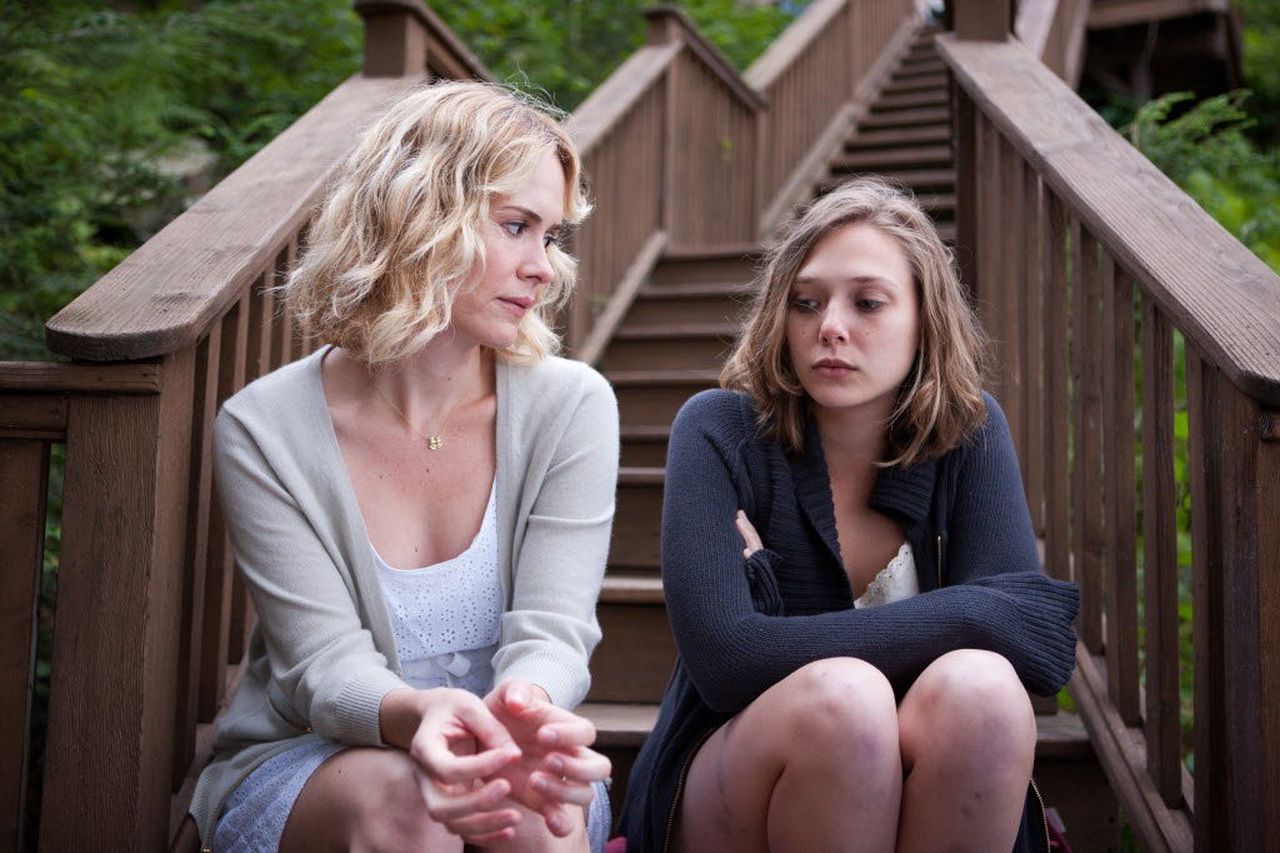 Durkin eloquently blurs the line between reality and nightmares throughout Martha Marcy May Marlene, frequently hinting that Olsen’s character is an observer in her own life, rather than an active participant. She’s glimpsed through a partially open door in Lucy’s home, the shot replicated in a flashback to her previous life, suggesting the young woman has resigned herself to being an outsider looking in. Martha Marcy May Marlene is incredibly subtle — even the score is a bare presence, comprising light strings that gradually ramp up when Martha really loses it following a creepy encounter at a dinner party. The kind of evil with which Durkin is concerned is ordinary and every day, yet also highly insidious. Martha may not ever be free because it’s burrowed so far under her skin. Even her rape is shot without any element of sensationalism or voyeurism, nor any nudity, the camera focused on Martha’s expression for the duration. Did she even get to shower afterwards? Does she have ownership over her own body? It makes sense that Martha doesn’t trust men — including her sister’s well-meaning husband, Ted (Hugh Dancy, allowed to be English for once), whom she kicks down the stairs at one point.

Threat is implicit in every tiny movement, even when people are ostensibly being kind to Martha. She holds the door to her bedroom in Lucy’s house closed with a chair, afraid to even leave to pee during the night, and complains about noises on the roof that no one else seems to be able to hear. Uncomfortable shots proliferate throughout Martha Marcy May Marlene, most of which surround Martha’s boundaries or lack thereof, but Durkin presents them with so little fanfare that viewers might begin to question, as the titular character does, what’s normal. Similarly, certain scenes are charged with tension, mimicking a horror movie, but the violence is mostly implied, emphasizing the cunning nature of Martha’s indoctrination. Durkin shows gaslighting in real time, both in how Martha becomes a conduit for the cult and how she fights back against attempts at normalcy once she’s out of it, simultaneously a victim and someone who arrogantly considers herself above simply being a functioning member of society. 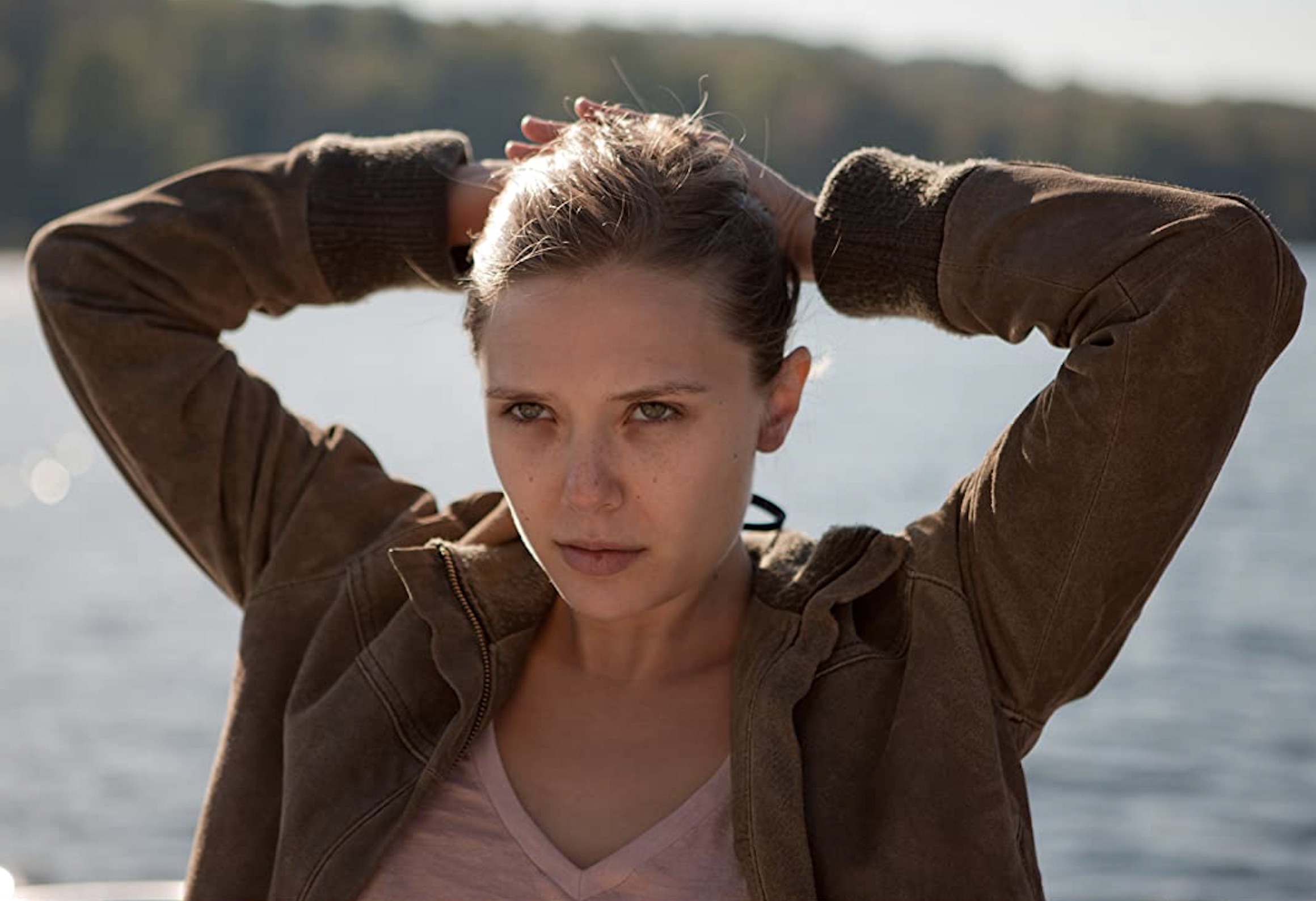 There are hints at the sisters’ backstory scattered throughout Martha Marcy May Marlene, including mention of a deceased mother and a lack of direction on Martha’s part, which is in stark contrast to over-achiever Lucy. However, the older sibling has her own struggles, particularly with conceiving a child. Martha must be babied in a lot of ways, exposing Lucy’s lack of maternal instincts, as the younger woman cruelly mocks her in another example of Martha’s complete lack of a filter. Olsen plays Martha like a coiled spring, and tension is wrought from waiting for her to snap, but it’s fitting that Martha’s ire is directed at the kind, patient Lucy who tries her best even though she has no idea what to do or say to make things better. Martha Marcy May Marlene opines that it’s sometimes better to give up trying to fix somebody, rather than forcing them into a breakdown, particularly in instances when the source of their trauma isn’t completely clear. As tough as it is in the moment, letting someone go is the only way to secure their personal freedom. It’s clear this isn’t an easy decision for Lucy, and Paulson plays it perfectly.

Martha Marcy May Marlene is beautifully captured, the lovely, grainy texture of Jody Lee Lipes’ (who lensed the similarly gorgeously miserable Manchester by the Sea) cinematography evoking a warm, summery feeling despite the chilly subject matter. Durkin’s film explores personal trauma in a non-judgmental manner, exposing how difficult these issues can be to put into words. Olsen’s utterly committed performance is unvarnished in a manner that actors twice her age would struggle with. Given that she was barely in her twenties at the time, it’s even more impressive that the actress managed such an emotionally honest portrayal of a woman in peril. Martha Marcy May Marlene serves as a personal showcase for Olsen’s skills above all else, but its not-quite-horror bonafides are undeniable. As the final shot underlines, danger is always lurking, just on the periphery, regardless of how safe we as women might feel in the moment. Many cult-based offerings have emerged in the years since Martha Marcy May Marlene, but none have been as quietly devastating and as uncomfortably real as Durkin’s 2011 tale.