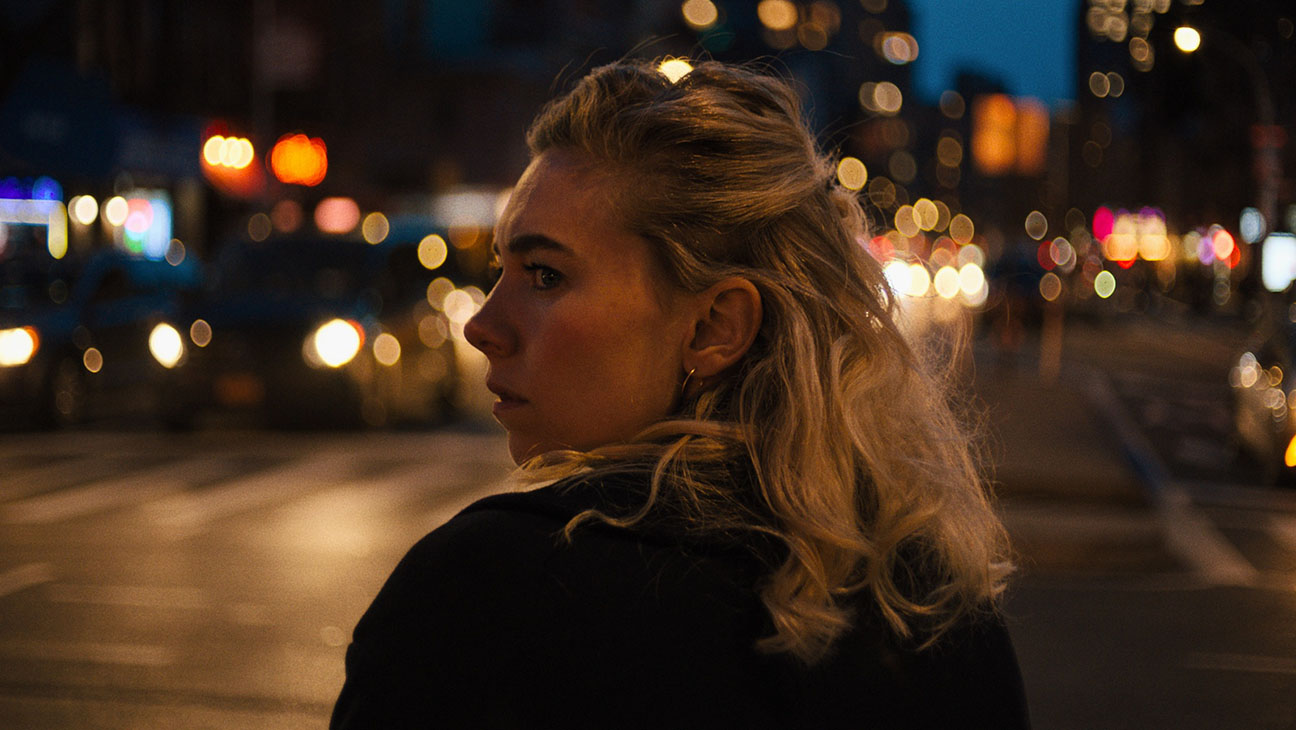 Cities are ironically effective in allowing a person to lose themselves. Being constantly surrounded by other people creates a natural anonymity, and that in turn can lead to a dissolution of self — if you can be anybody, perhaps you are somebody else. Most adults moving around a city have a purpose if not a distinct identity, each of them having a task to complete, a job to go to, and so on. Teenagers, however, can use the streets and public spaces as their own more mature playground, fully utilizing the freedom of a city. In Italian Studies, that freedom proves especially seductive to Alina Reynolds (Vanessa Kirby), a woman who slips into a new identity, or rather slips out of her own into an anonymous void of a character, “Alina,” wandering about and soaking up New York City like a sponge. As Alina bounces from encounter to encounter, she comes upon a charismatic teen boy, Simon (Simon Brickner), who encourages her to hang out with him and eventually join his group of similarly-aged friends, with Alina becoming part social tourist, part uncomfortable participant.

Or does she? Italian Studies, as written and directed by Adam Leon, is the type of indie art film where nothing is certain about its plot, setting or context. It’s not quite surrealism, as Leon and cinematographer Brett Jutkiewicz shoot the movie in a loose, verité style, intercutting the constantly moving camera with insert sequences of Alina interviewing the teens she comes across in the format of a standard documentary. Leon clearly cast several of the teen characters as themselves, making their improvised dialogue and their answers to the questions Alina asks that much more truthful and revealing. The teen characters/actors are easily the most engrossing aspect of Italian Studies, and their inclusion fits nicely into the movie’s theme of a search for identity, these young people still growing and learning where they fit into the world and how they’d like to be.

The issue is Alina, who finds she may or may not be a famous writer with several published short stories, and who is now working on a novel about teenagers—particularly one named Simon. The slow trickle of hints and allusions that Leon drops as Italian Studies progresses gives the audience a ton of rope with which to hang a theory or two on, everything from Alina being lost in her own research, meeting and interviewing her fictional characters only in her own mind, to Alina being another woman entirely who merely uses some circumstantial evidence around her to convince herself that she is this author she’s come across. Kirby acts as the “host” and somewhat impartial observer of Italian Studies in this way, becoming a sort of audience proxy figure, finding these moments and characters along with her. Yet the mystery of who she is really and how the film feels about her (let alone the other people in her orbit) is too riveting to drop as fully as Leon seems to want it to be. This is why, when it starts to become clear that no concrete answers will be forthcoming, Italian Studies meanders along with its protagonist, becoming hopelessly lost itself.

For her part, Kirby is steadily building a repertoire of complex female protagonists, and Alina is a nice addition to that collection. While the narrative may frustrate with a lack of answers, Kirby’s open, expressive face provides enough interest to carry the movie. If Italian Studies is indeed a film about mental illness, with Alina suffering from a fugue state, Kirby’s performance is brilliantly subtle, as it never slides into showy grandstanding or Oscar-baiting dramatics. Given the haphazard structure of the film, Kirby does well as its anchor, easily moving between solo moments of discovery in the streets of NYC and interacting with the group of non-professional teen actors and making them part of an ensemble rather than an intrusion into her story. Part of the reason Italian Studies frustrates as much as it does is because Kirby’s performance is intriguing enough to want to know more than Leon is willing to say.

Like many a David Lynch film, there are a number of narrative “dead-ends” that crop up during Italian Studies, their brevity seeming less like part of a whole and more like cameos of intrigue that fail to develop. Maya Hawke shows up for a brief handful of scenes as a younger alter-ego of Alina, or perhaps she’s one of the author’s fictional characters (she’s credited as “Erin”). Leon captures some footage of some local NYC bands on stage, continuing the documentary aspect of the movie but never settling for a full performance. A rather bold moment in Alina and Simon’s relationship occurs, lending the promise of some additional drama but ending up functioning as a grace note more than a new avenue to explore.

In essence, Italian Studies is a movie made up of bits and pieces that never quite coalesce, and perhaps that’s its entire point. Leon and Kirby present a character who literally loses herself, attempting to build her persona back up by latching onto whatever comes closest, yet nothing really sticks. On paper, Italian Studies should be a beguiling journey following a character into the eerie uncertainty of confusion and the seductive world of discovery, of redefining oneself. Yet the movie is so anchorless that it ends up feeling aimless, never finding beauty or fear in its quest for self but rather a bland resignation. While the film never directly addresses the Coronavirus pandemic, it’s evident that its story of a person unmoored from the definitions of “normal” life is applicable to the experience we’ve all collectively been through. Yet the journey of Alina and her teen companions ends up with the same inconclusive notion we all found recently: in art as in life, there are, frustratingly, no certainties.