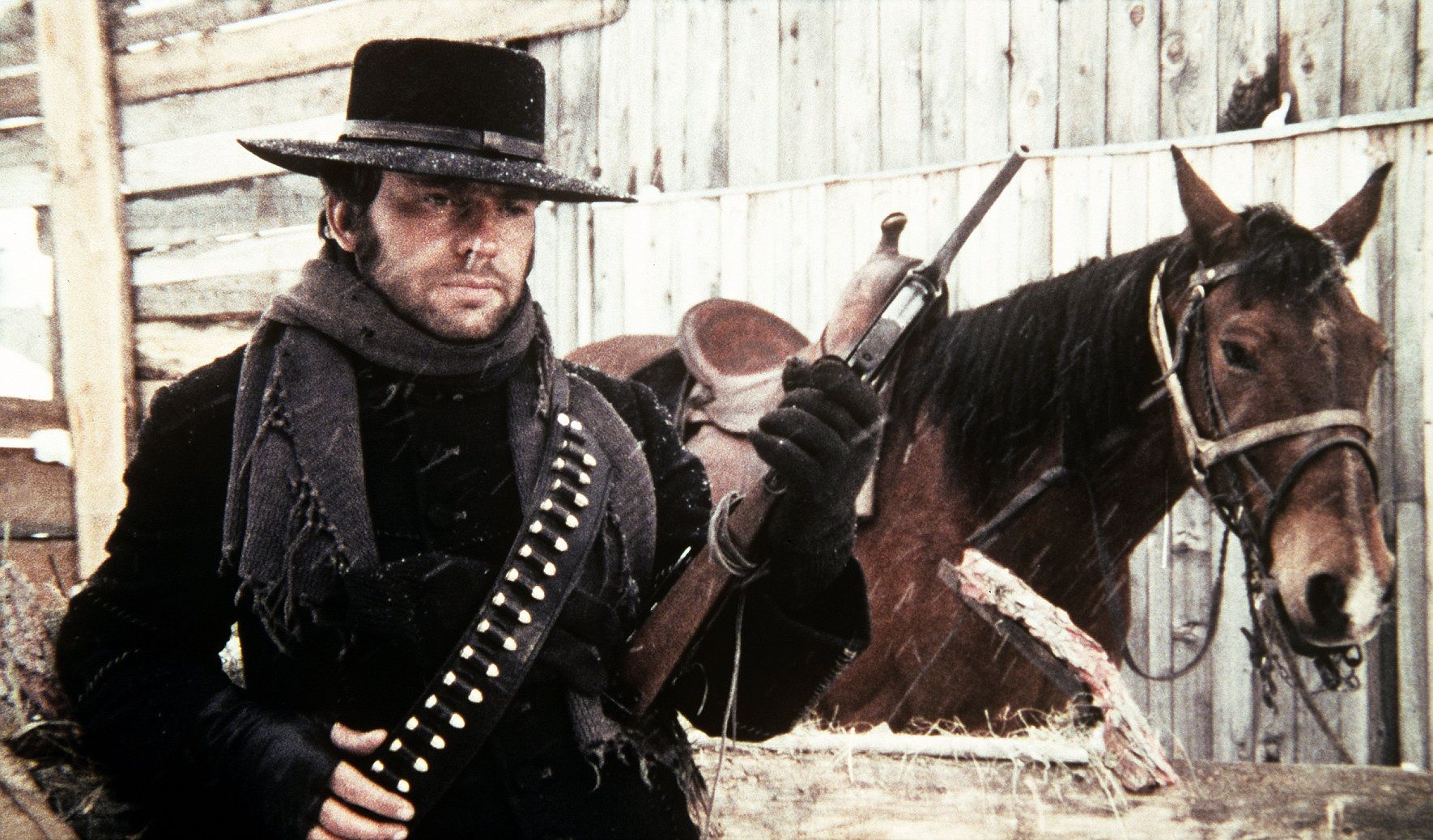 A lone rider moves through a pitiless western wilderness. Stoic and expressively remote, he emerges from a tree-covered refuge into an open expanse of land, where his solitary tranquility is soon contested by a band of assailants. His surface serenity proves deceptive, for his is a quick draw, with an equally precise shot, and he swiftly dispatches the aggressors — all but one, who he merely wounds by shooting off his thumbs, ensuring the hostile never fires a gun again. To this point, in terms of what opens a Western, The Great Silence (Il grande silenzio) is engaging if not exactly groundbreaking. But this is just the beginning, and this is but a rudimentary summary of its first few minutes. What’s to come in this 1968 Spaghetti Western directed by Sergio Corbucci — from its scenery to its peculiar exploitation of props and production design to its staggeringly downbeat conclusion — is something altogether unique, especially for a Western.

Immersed in the blinding whiteness of Utah’s snow-covered mountains (the geographic arrangement already a relative rarity for the genre), The Great Silence is set in the aptly named settlement of Snow Hill. There, an ostracized group of so-called outlaws (likely noncompliant Mormons) are living in distressed conditions. Though they remain undefined throughout the film, individually or as a motivated group, the reasons for their basic concern are clear enough. The duplicitous Henry Pollicut (Luigi Pistilli), a conniving banker and justice of the peace, has enlisted the nefarious services of bounty hunter Loco (Klaus Kinski) and his gang, hiring them to eradicate those who stand in the way of his territorial ambitions, namely these belligerent defectors. Vonetta McGee, making her film début, appears as Pauline Middleton, widow of one such rebel. To right the wrong of this onslaught, and to presumably bring some semblance of righteousness to the territory, she engages the aforementioned lone rider, another bounty hunter named, as appropriately as the film’s town, Silence.

Read More at VV — Soundtracks of Cinema: ‘The Power of the Dog’ 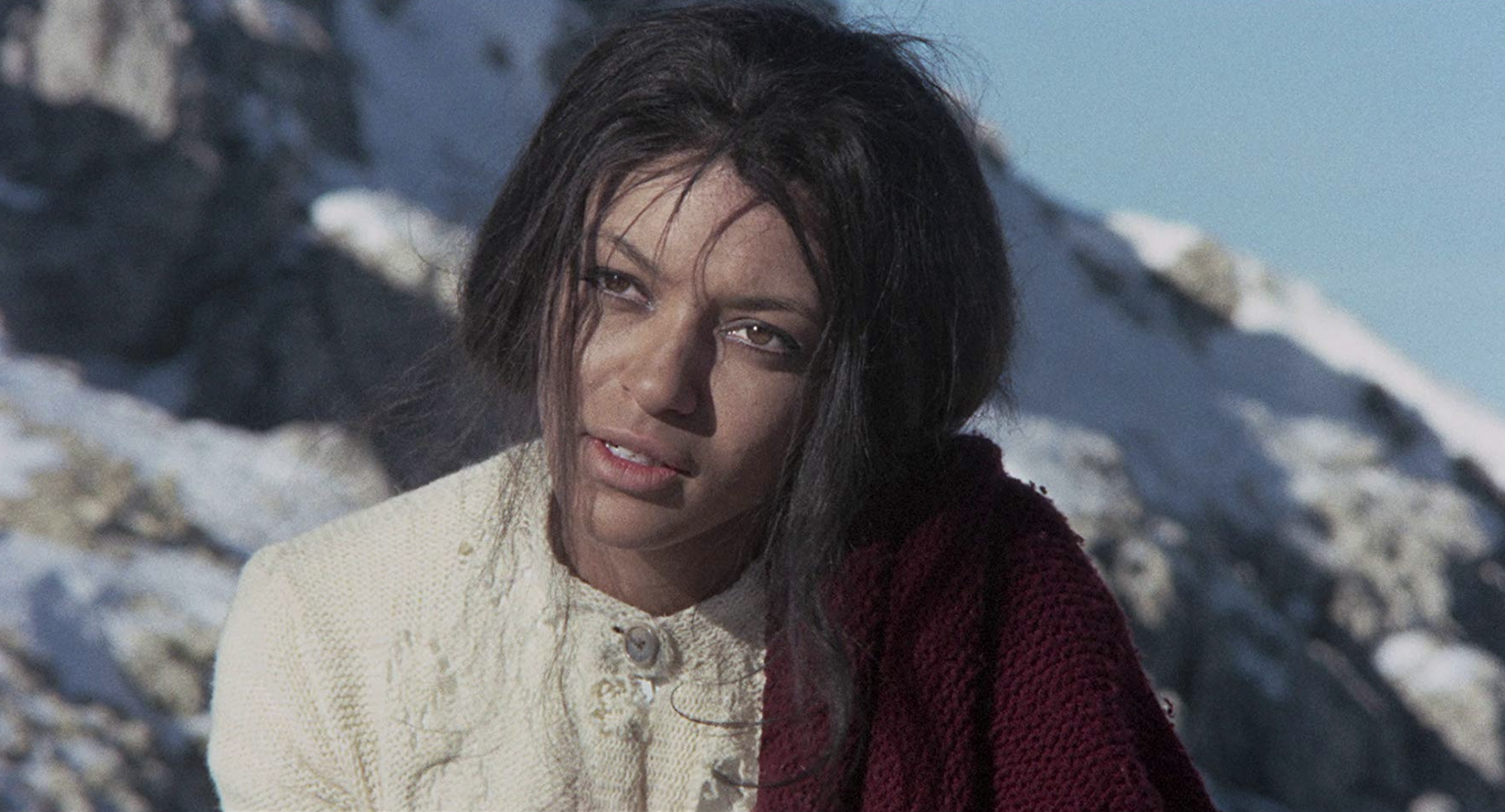 “He is faster than the devil,” remarks one eyewitness. “For all I know, he is the devil.” Silence, played with chilling, curious composure by Jean-Louis Trintignant, has been rendered mute by an incident from his childhood, when Pollicut and his men killed the boy’s parents and slashed the youngster’s throat. Many Western heroes harbor a grudge, a violent past prompting a violent present, but Silence’s scar is as literal as it is psychological. Taking the role after it was turned down by Franco Nero, who had previously starred, quite fantastically, in Corbucci’s Django (1966) — the first of many such films bearing the name if not the same degree of excellence — Trintignant didn’t speak Italian or English. So, according to Corbucci, he directed the star, as well as others comprising The Great Silence’s multinational cast, by “numerological diction,” a technique used by Federico Fellini whereby actors essentially count in their native languages and the scripted dialogue is later dubbed in (often, even in this case, rather poorly).

“They call him Silence,” says Pauline of the newly arrived avenger (with whom she promptly shacks up), “because wherever he goes, the silence of death follows.” Which is true. Killing is a way of life for the ostensible hero of Corbucci’s picture. Abiding by a code of sorts, his proven method of dispatching targets derives from sly provocation leading to blameless self-defense, therefore killing under perfectly legal parameters. He is a killer all the same, however, and for as much as what he does may fall under permissible guidelines, the same could also be said for Loco, who acts in accordance with authorized directives. There is mutual antagonism between the two, as each revel in prodding the other, but, at least as much as Loco asserts, there is also an occupational respect; Loco knows Silence’s system and acknowledges the technique with begrudging admiration. Beyond this obvious contention and the evident division, The Great Silence’s distinction between concepts of “good” and “bad” are less clearly defined. As in some of the greatest Westerns ever made, the prospect of heroic opacity is one of the film’s more intriguing features, and here there is a mesmeric inscrutability to both men, neither one inviting straightforward fidelity. In their means of operation, the two combatants are like mirror images of frontier justice, for better or worse: “Try to understand, madam,” Loco states after one killing, making his case with cunning cruelty, “it’s our bread and butter.” 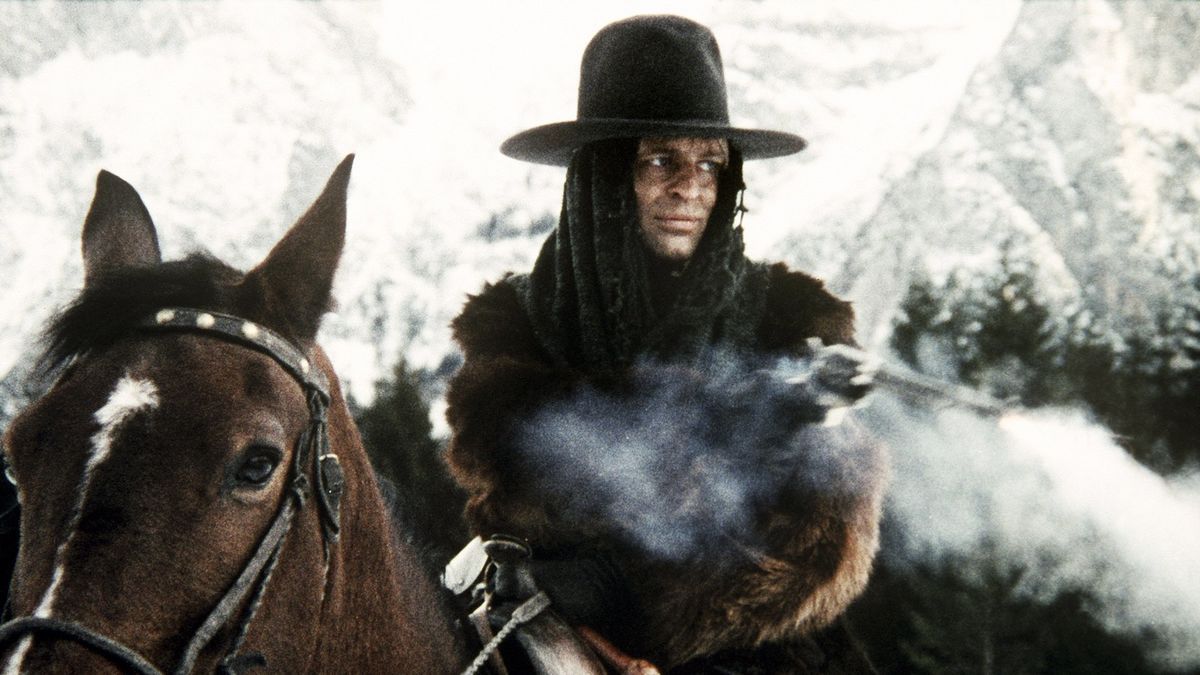 Shot on location in the Italian Dolomites, where a rumored 26 tons of shaving cream formed the snowbanks of the film’s backdrop, The Great Silence was meant to echo certain “Snow Westerns” of decades prior, like André de Toth’s 1959 film Day of the Outlaw (while previewing Robert Altman’s similarly transgressive McCabe & Mrs. Miller, from 1971). There, amongst the howling winds and billowing blizzards, faces grow worn by the weather and by years of ruthless living. The accumulating blankets of snow also prove beneficial to someone like Loco, who uses the frosty groundcover to keep weapons hidden and bodies buried, kept “fresh” until they can be tendered for reward. Such idiosyncrasies were par for the course with Spaghetti Westerns, and to that end, The Great Silence submits quite a few, including the gun carried by its savvy, eponymous crusader, a machine pistol stored in a wooden box holster.

An Italian-French co-production, written by Corbucci, Vittoriano Petrilli, Mario Amendola and Bruno Corbucci, The Great Silence hearkens to classic Western fare as well, integrating a number of its tried and true tropes: the briefly seen shady ladies who entertain the isolated men of the region; the refrain of money corrupting so completely; the grizzled physical constitution and soiled attire of the outdoorsy kinsmen (the fur coats here, more in Spaghetti Western tradition, are exceptionally extravagant). Taking place in 1898, there is also in The Great Silence, not unlike other revisionist Westerns of its day (see Sam Peckinpah’s The Wild Bunch, released the following year), the notion of a west in transition, if not downright elimination. The recently appointed governor in The Great Silence declares that murder for reward has to stop, proclaiming “the old west is finished,” indicating the recurrent theme of precariously established order and newfound political imperative. There is also a sheriff in the film, played by Gideon Burnett, but he is a naïve, somewhat bumbling newcomer who has the best of intentions but is clearly in over his head. Furthermore, while traces of political influence were hardly unheard of in Spaghetti Westerns, or in the genre more generally, social resonance rests mightily on a film like Corbucci’s. Released in the midst of the Vietnam War and in the wake of several high-profile activist deaths (Che Guevara and Malcolm X, among those regularly cited), The Great Silence’s anti-capitalist, revolutionary sentiment is pronounced yet not overpowering. A concluding title card likewise attempts to bring the events of the film into a real-world context, alluding to the supposed ramifications of bounty killing and how the practice was eventually abandoned, but it feels tacked on and largely irrelevant after The Great Silence’s flabbergasting culmination.

Read More at VV — Soundtracks of Cinema: ‘The Harder They Fall’ 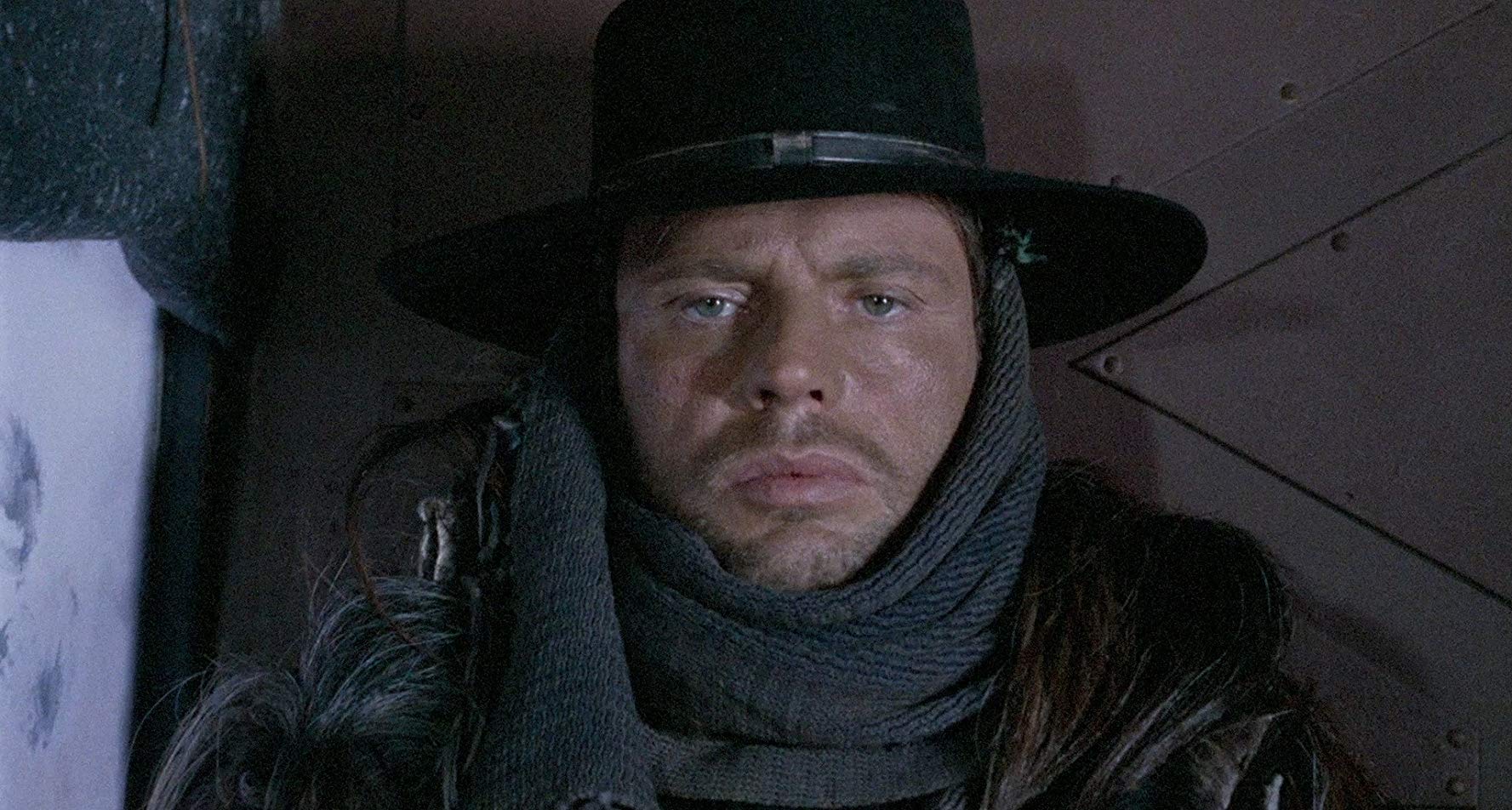 And how could anything follow Corbucci’s anarchic denouement anyway? As noted by filmmaker and Spaghetti Western aficionado Alex Cox, The Great Silence, “like most Italian Westerns, is incredibly bleak and pessimistic; but worse, it has the most horrible ending of any film I’ve ever seen.” Silence’s vocal impairment had previously applied just enough vulnerability to his character, and by the end of the film, as the hero heads to a final showdown with Loco, he is sans the use of his shooting hand as well, the result of an earlier scalding. Pauline pleads with him to simply abort the altercation, but alas, he has a job to do. Building the tension as Silence advances and Loco and his men wait, having rounded up the fugitives, holding them hostage, there, in a nocturnal confrontation with snow peaceably, almost ironically falling, Corbucci throws the film, indeed the genre, for a loop. When Silence loses the use of his other hand, it commences one of cinema’s most fatalistic finales. Although Corbucci delivered no less than two alternate endings to The Great Silence, what ultimately exists in the film’s final form supposedly caused 20th Century Fox mogul Darryl F. Zanuck to swallow his cigar in shock.

Boasting a fine score by Ennio Morricone, whose work is most commonly associated with Corbucci’s fellow countryman and fellow maestro of the Spaghetti Western, Sergio Leone, The Great Silence is miles away from the graceful, operatic majesty of Leone’s more famous entries. Corbucci’s cynical vision is fashioned from a style that is brutal and spontaneous, with a manic camera, more visceral violence and an unabated crudity (the dubbed lip-smacking of one man eating chicken is nauseating). The cinematography by Silvano Ippoliti is suitably dingy, fitful and consistently inconsistent, but as Cox remarks, The Great Silence is Corbucci’s “tightest, most relentless Western; his best and his bleakest.” Even if it is “shot in his trademark messy, over-edited, jerky-zoom style, and its telephoto close-ups are frequently out of focus… it is incredibly beautiful.”