Berlin Critics’ Week: Replacing the Beauty of an Image with the Clarity of a Message 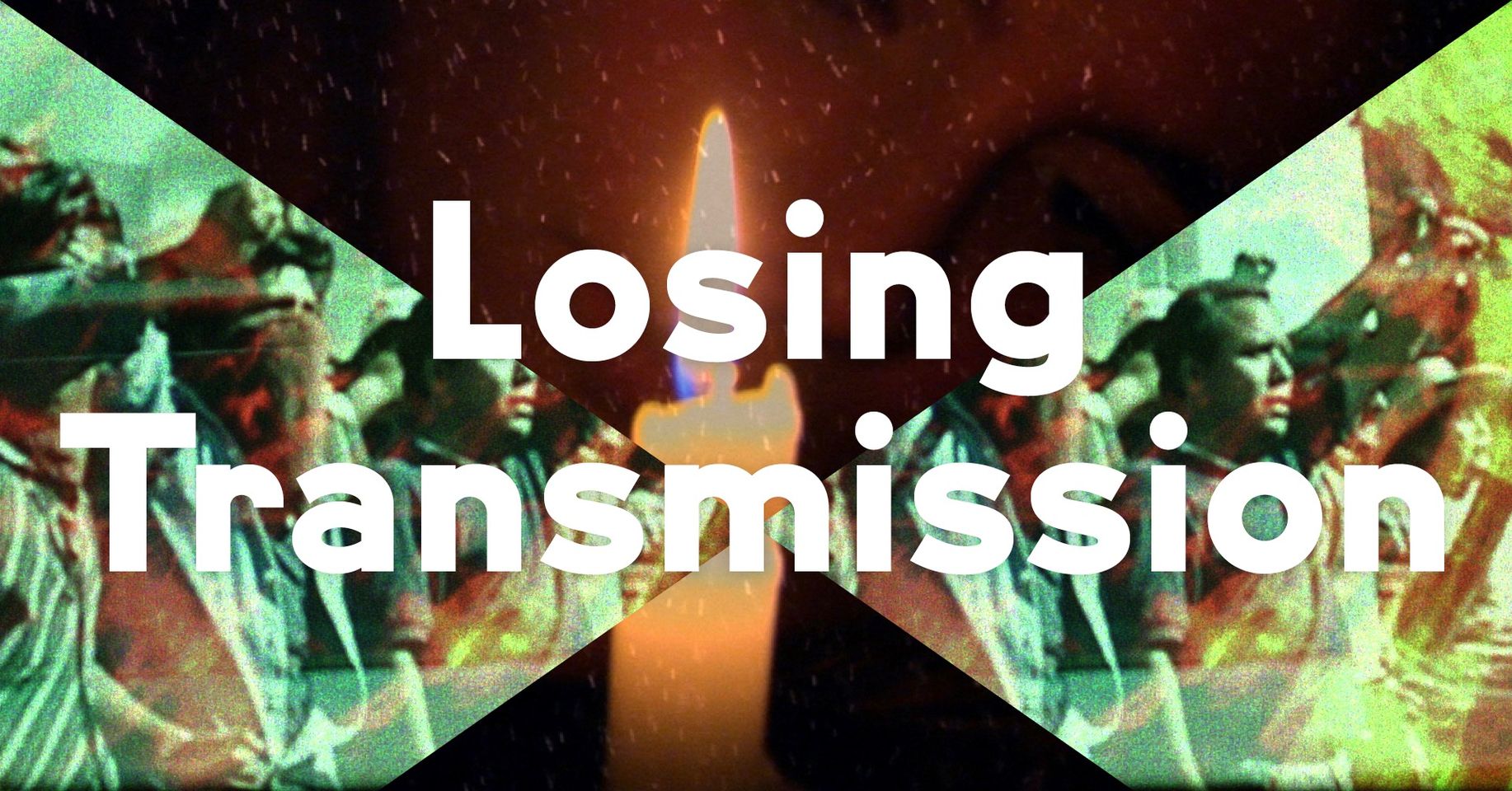 Berlin Critics’ Week features some of the most inventive, daring and politically-informed cinema that the calendar year has to offer. Generally, this section that runs parallel with Berlinale pairs movies off — one short and one feature — in philosophically themed couplets. Things started off strong in my dive into this wonderful week of visual experiments with the “Losing Transmissions” program. The short film Notes for a Déjà Vu, an experimental documentary by the Los Ingrávidos collective, was inspired by early Jonas Mekas protest films like Guns of the Trees (1961); a collage of images that collide and confront each other.

The images in Notes for a Déjà Vu, shot on Bolex 16mm camera, are deliberately unstable. The camera is constantly in flux and moves along with the people in it. Images dance along with each other, giving glimpses of footsteps, marches, fire, notes of remembrance, musical instruments and dancing. People young and old gather in Mexico City to commemorate the Tlatelolco Massacre of 1968, when a U.S.-backed Institutional Revolutionary Party government opened fire on a mass demonstration before the 1968 Summer Olympics in Mexico City. The massacre took place in the Plaza de las Tres Culturas and resulted in the deaths of more than 300 people.

The Notes for a Déjà Vu images are also deliberately nostalgic. Overlayed with narration by Jonas Mekas himself — taken from a few films including Diaries Notes and Sketches (1969) and Out-takes from the Life of a Happy Man (2012) — the visuals are juxtaposed with the late Lithuanian-American filmmaker’s personal connection to his own footage. As Mexican citizens young and old march in the street, Mekas states “Here I am with my film. This film, which is… just images… just images… with no purpose… just for myself… just for myself.” This contrast is a stark and curious declaration on the range that the camera offers to its filmmaker. How do we use the camera? What do we create for? As a means of revolution or as a self-fulfilling observation of the world around us?

As young Mexicans paint and draw protest signs in Notes for a Déjà Vu, sounds of Mekas processing and cutting celluloid overlap. Cinema as a revolutionary act is something the hopeful artist has always believed in. This juxtaposition of image and sound portends that maybe the act of creating something, whether it is for an intended message or not, is still a revolutionary act. Movies can be a powerful tool for filmmakers to create and forge ideas for themselves, to make sense of the world and their own place in it, even if that doesn’t extend outward and even if, as Mekas says, “my world is not so different from any other world.” 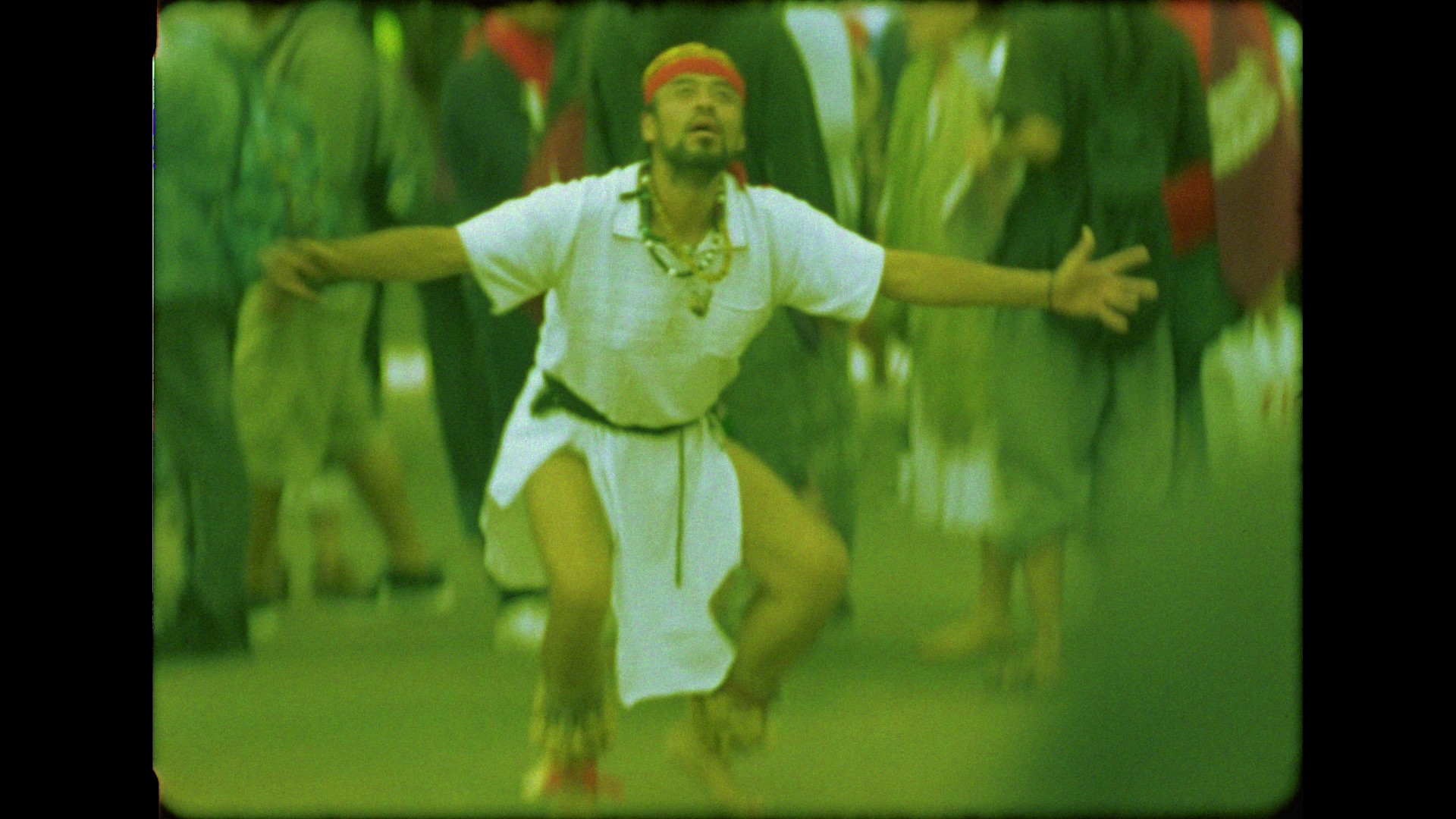 Notes for a Déjà Vu and the companion feature The Dream and the Radio by Renaud Després-Larose and Ana Tapia Rousiouk both employ footage that involve protest and gatherings, the latter film obfuscating an ambiguous rally by a shadowy revolutionary figure as a distant scuffle amid fans assembling for a Montreal Canadiens hockey game. Police lights and the reading of something resemble a personal manifesto, which continues later on in The Dream and the Radio. It’s a more narratively inclined film, centering on a trio of young Québecois who become involved with a mysterious activist named Raoul Debord (Étienne Pilon).

If Notes for a Déjà Vu gains its inspirations for cinema of revolution from Mekas, The Dream and the Radio does so through 70s political cinema like Jean-Luc Godard’s La Chinoise (1967), Bernardo Bertolucci’s The Conformist (1970) and Agnès Varda’s One Sings, the Other Doesn’t (1977). The 135-minute movie mixes both film and digital images with found footage visuals into a collage that turns its modern day Canadian setting into a relic of the past. The Dream and the Radio evokes the revolutionary spirit of the 60s and 70s through careful use of colors (reds, blues, oranges), pop culture memorabilia and digitally modified images while recalling the late 60s and early 70s films of the Dziga Vertov Group. Harsh juxtapositions of a Facebook page and a character writing with quill and ink suggest the futility of rejecting the modern technological age.

The Dream and the Radio, as the title suggests, is heavily concerned with the ways that technology can be perceived as both an advantage and a sign of societal degradation. Debord seeks to relay his manifesto and spark his movement by taking over the city’s radio towers. His Facebook page is similar to many others — a collection of hobby photos (singing, playing instruments, hanging out with friends; some photos about the degradation and alienation of work under capitalism. Debord acknowledges his own hypocrisy, how he owns and uses a cellphone for communication but actively dislikes it. An acquaintance named Constance Garcia Rousiouk (portrayed by Rousiouk, the co-director) says that it’s good for practical purposes, but he retorts that the power of the cellphone goes so far beyond that, that its “the first thing we pick up to fill the void of isolation.”

The movie manifests its conflict of technology and pre-modernization in its audial and visual templates. While the characters become deeper and deeper entrenched in the ideas of Marx, the audience must consider how cinema itself contends with its own technological advancements, how the digital image changes the perception of one’s view of the world. Things look more sterile, more clear, but is it necessarily worse? One could consider that the digital image is used first and foremost for clarity, that as cinema and technology progress, the art of filmmaking slowly morphs, even degrades, into the regurgitating of messages. 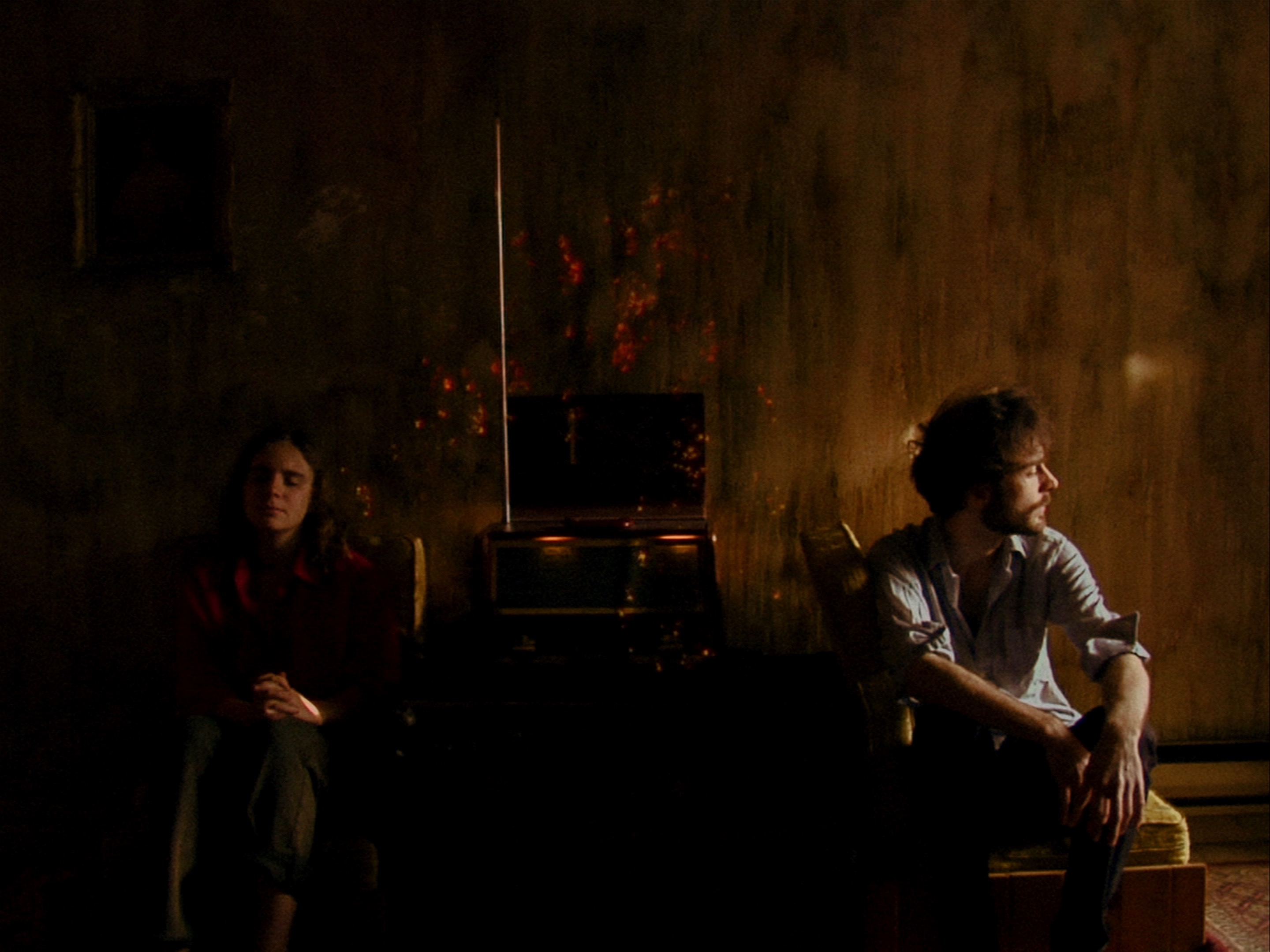 Like the Bolex camera of Notes for a Déjà Vu, muffled audio-tracks, old celluloid and candlelight aim to decontextualize the images from their time in The Dream and the Radio, bringing the past to the present and obscuring the clarity of the film’s messaging. Are “images with no purpose” any less valuable than images that signal a direct ideology? Perhaps the title of this two-film presentation is called “Losing Transmission” because both productions make viewers reconsider how advancing film technology changes the inherent beauty of an image into a utilitarian tool for messaging. These two works can then be considered rejections of modern filmmaking altogether. They are not trying to “say something” but rather presenting people and images to see if something connects. The art of this concept seems lost in today’s cinema.