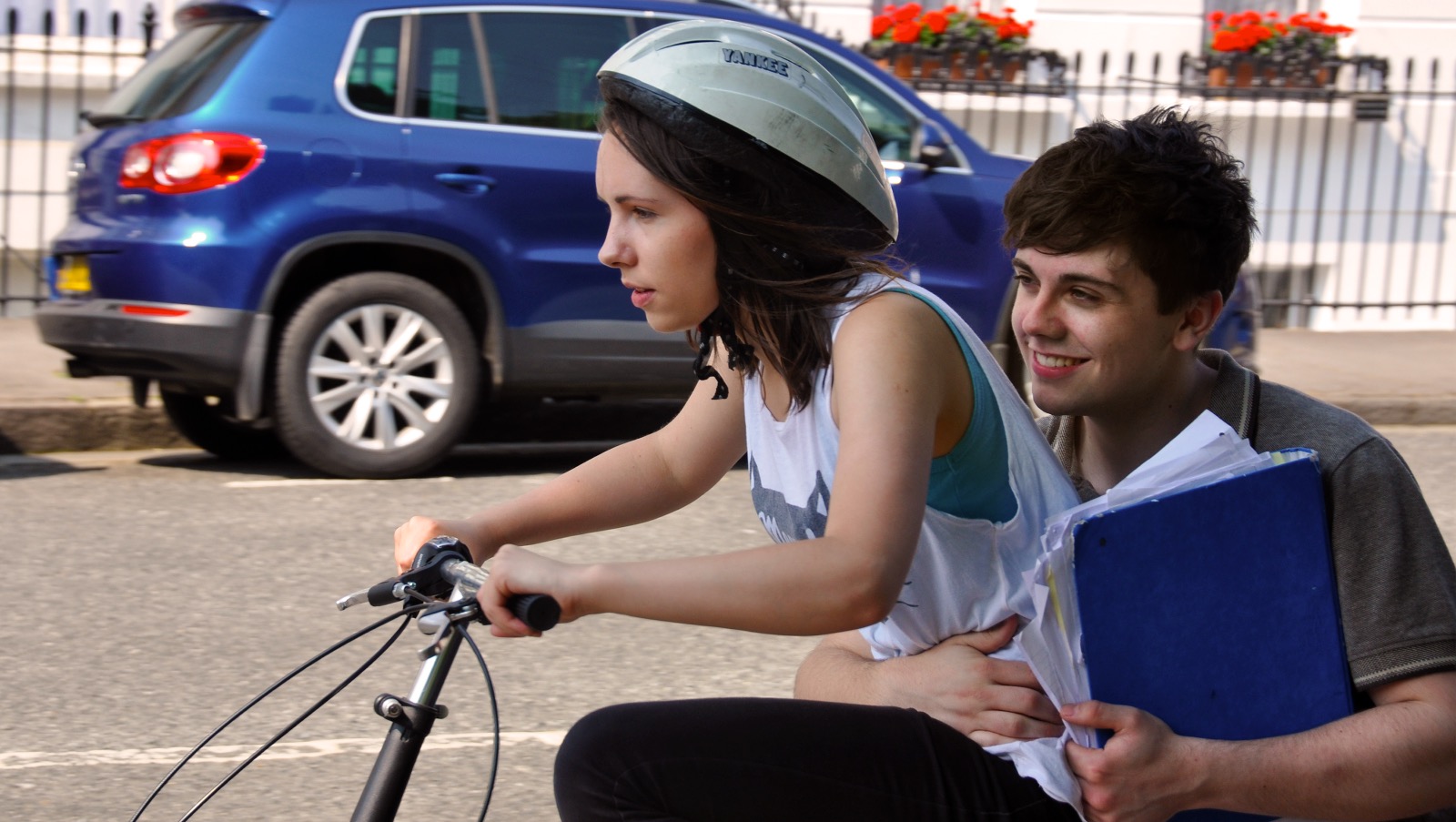 It’s a familiar sight for those having grown up in the heart of London: two teenagers huddled on the back of a double decker bus, sharing a mangled pair of earphones and nodding along to beats of the noughties. An endearing and earnest take on the coming of age story, the Shakespeare Sisters’ Soundtrack to Sixteen is a memorable and relatable tale about pre-adulthood frustrations, the perpetual anxiety to impress your peers and the truly awful nature of exam season.

Maisie Tennison (Scarlett Marshall) and Ben Maxwell (James Calloway) attend separate sixth forms in London, both preparing for their AS levels and navigating the precarious few years left of adolescence. Despite having a tight-knit group of friends, Maisie finds her mind wandering towards thoughts of out-of-reach boys, and her lower social status. Maisie’s determination to prove her worth results in quite a desperate attempt to befriend the queen bees of the school, who take great pleasure in ridiculing and mocking her. Nearby, Ben continuously agonises over the fact that his grades are slipping, and the “stupid” kids, as he calls them, are doing better in their studies. Ben also daydreams and questions the need for education and systematic evaluations of intelligence. He’s also clearly just feeling frustrated and angry while processing his fluctuating hormones. Both of Soundtrack to Sixteen’s lead characters have an internal dialogue playing alongside their actions, which is clumsy and predictable, but also an inaccurate depiction of late-teenage turmoil.

The premise of Soundtrack to Sixteen is warm and relatable, a time capsule of the early 2000s. The Shakespeare Sisters depict a middle-class London teen life, full of smart colleges and articulated accents — it’s almost exhausting hearing the characters moan about their seemingly privileged lives. The young actors take the roles in stride, learning how to convey emotions — which feels a bit stilted and awkward at times — while demonstrating their potential. With a cast predominately made up of the filmmakers’ friends and associates, this ambitious decision mostly pays off. The larger issue at hand is that Soundtrack to Sixteen feels like a parent penning a story of teenage emotions. Once the teenagers actually meet, after enduring their own separate existential crises during the first half, the Shakespeare Sisters’ film begins to feel much more natural. When the performers play football or just hang out, they look far more comfortable in their roles; their combined physical presence is far more down to earth and relaxed. In this respect, less is definitely more.

In many ways, Soundtrack to Sixteen’s narrative rests too heavily on the outsider genre trope. While it makes for an interesting story to have protagonists who try to subvert the social norm, this approach can unfortunately lead to quite a predictable tale of oddballs falling in love. In addition, school girls being snarky isn’t new, and the filmmakers do a bit of a disservice to Maisie by having her pine over the confident and cool student, Nathan (George Fanzio), in front of Ben (which obviously hurts him). It’s evident that Maisie is a tad oblivious to social queues and the feelings of those around her, but she deserves to have more empathy. Marshall provides a brilliant performance while depicting her character’s headstrong determination and unflinching attempts to please people. There’s a fiery nature to Maisie, as she possesses an empathetic depth which deserves a degree of praise. Teenagers are far from perfect, but these characters deserve better than being portrayed as vapid kids. Calloway, on the other hand, is given more freedom with his emotions as Ben. During one scene, the character curses as his classmates sit in stunned silence. It’s a genuine display of catharsis from the overwhelming pressure of education. Calloway manages to inhabit Ben’s inner anxieties, and conveys a rebellious nature picked up on by his peers. On a more practical note, the 83-minute Soundtrack to Sixteen could’ve benefitted from sharper editing during transition scenes.

From first snogs to secret parties, the initial taste of adulthood and non-parented freedom is exhilarating and exhausting. In Soundtrack to Sixteeen, Ben and Maisie’s worrying and word vomiting is deliriously tiring, and could make some viewers want to forget memories of secondary school. The Shakespeare Sisters boldly attempt to capture a young romance, but the film occasionally loses momentum with its loose script and clunky editing.

Elle Haywood (@ellekhaywood) is a freelance film/culture writer, festival juror and submissions reviewer. She is currently an Associate Editor at Take One and studying a Masters at the National Film & Television School. Her work specialises in international festivals focusing on Scandinavia and Western Europe, sociopolitical events and independent filmmaking.