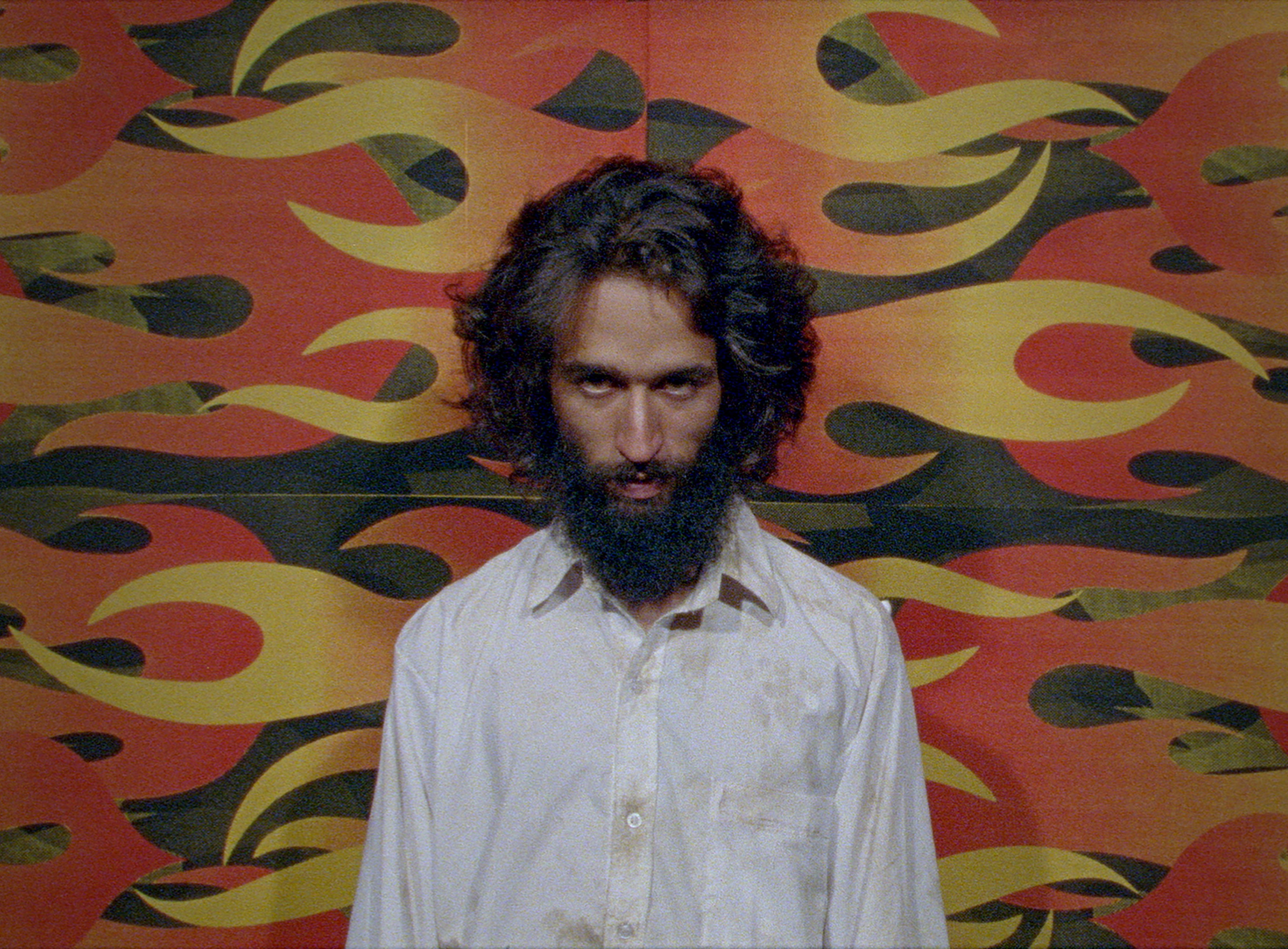 With a prime spot in the Encounters section at Berlinale, and making its New York debut next month at New Directors/New Films, Los conductos announces Camilo Restrepo as a visceral talent with the substance to back up his sublime imagery. After several promising shorts, the first feature marks a certain breakthrough from the Colombian director, who can now be placed alongside Ciro Guerra and Alessandro Landes; Colombian filmmakers who use pop cinema techniques from Hollywood and beyond to tell twisted stories of life back home.

Drawing from star Louis Felipe “Pinky” Lozano’s real experiences, Los conductos opens with a daring escape, as Pinky shoots a guard, steals a bike and goes on the run. These first minutes travel miles in about eight shots. A voiceover soon explains that Pinky has been in a religious sect, and now suffers a crisis of faith as he returns to Medellin. Carrying a gun with the words “this is my life” scratched into it, Pinky hides out, but it’s not long before he’s back in the grip of addiction and faces the consequences of itinerant life.

From shot to shot, Restrepo strips back the frame to its bare essentials: object, action. Then he layers these images to form a more oneiric meaning. Think Robert Bresson with symbolism, as a slow zoom into a bullet hole will match cut to a petrol pump going into a fuel tank. A motorbike headlight cuts to a full moon. Los conductos is stirring in its sheer simplicity, feeling as though Restrepo, who also wrote and edited the film, is literally chopping each shot together by hand. Each cut is considered, almost bulky, as though each previous shot is an imperative to bring the viewer to the next. Restrepo brings physicality back to filmmaking, the Kodak stock adds depth of texture to his bold and contrasting colors, making each face look like a brushstroke with 16mm grain buzzing around the screen, undercutting moments of otherwise complete darkness. 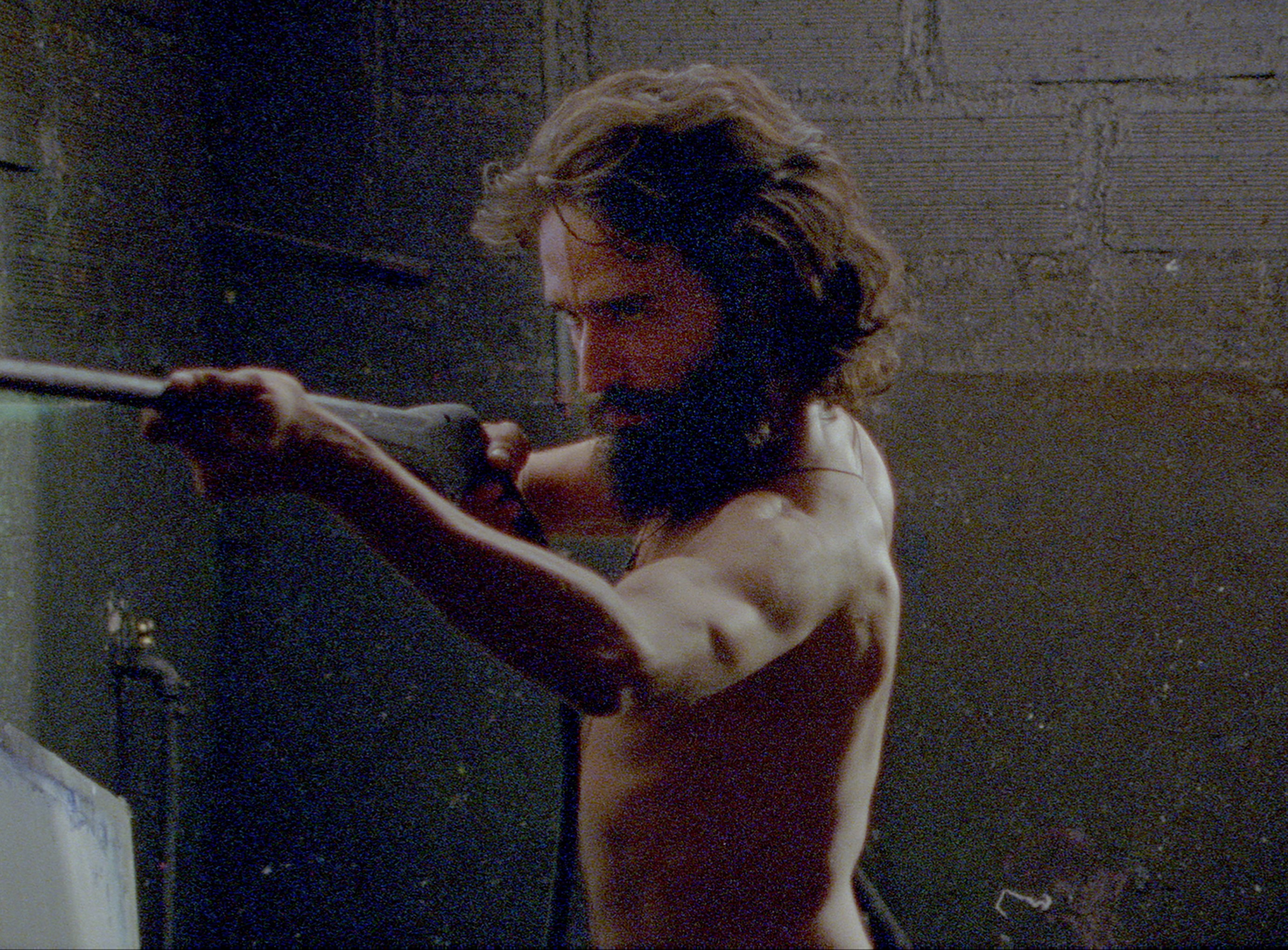 Despite the aforementioned techniques and 60s-style title cards, Los conductos isn’t in awe of nostalgia and analog filmmaking. The objects that appear at first are unstuck from a particular period: a motorbike, cigarette, a cardboard box. Then the image of the Adidas logo relocates the viewer back in the present, as Pinky gets a job manufacturing bootleg sportswear. With long shots of the machinery at work, the film settles into an almost industrial mode, as Pinky realizes that by trying to go straight, he’s settled into another machine, with its own false icons.

Having set up Los conductos as a hard genre film, with a Mandy-like rhythm and oppressive, druggy vibe, Restrepo slowly rubs away at that, retaining the intensely paranoid viewpoint as Pinky just tries to survive. The cops never come, he doesn’t catch up with the mafia, there’s no shootout. Instead, the fringes of society come to the fore as Pinky’s internal struggle is physicalized in the white-shirted manifestation of Revenge. As plot melts away, images recur. Those opening shots appear again, like they’ve been burned onto the audience’s collective eyelids. A flame pattern printed by Pinky onto fabric recurs, shifting the viewer’s temporality along with the subject. When it is folded up by a machine, the fabric moves as though the flames are flickering in the wind.

More and more, Pinky hovers around in junkyards, crawling around human detritus. To see an empty bottle of bleach, crunched and discarded, is to see it as it really is. The facade of its use is gone. For Pinky, consumerism only exists to be subverted — plugs are to have contraband hidden inside, wires are to be pulled out to manipulate a city in one’s own will. He finds joy in magma: one blistering scene has Pinky describe his association with lava as unrepentant chaos. Restrepo films seemingly endless burning light which pours on and on until the voiceover hits, describing lava as a never stopping, interminable mass, as how things should be, as how when you look inside you can “live the illusion of being chosen people.” 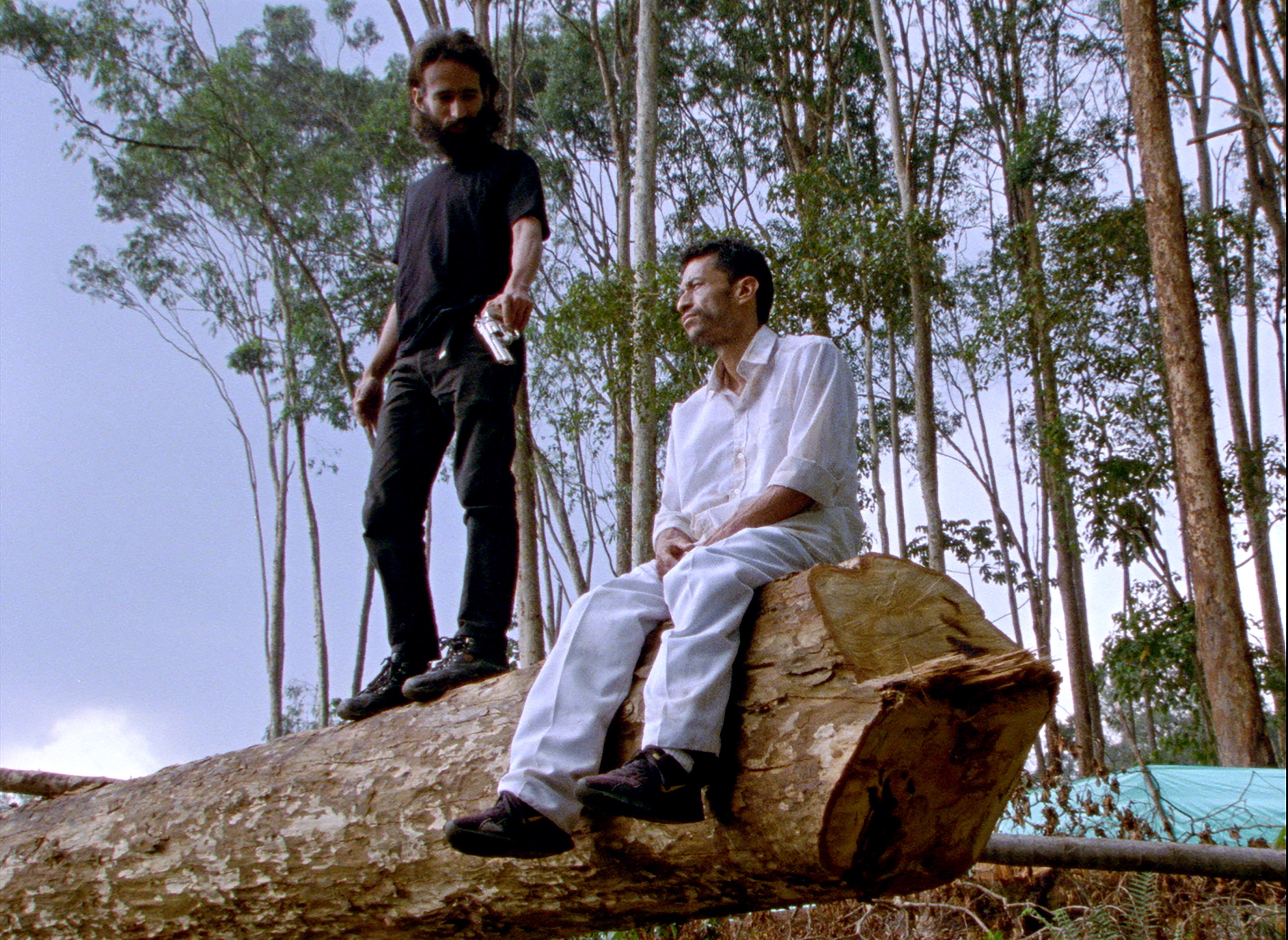 But for all Pinky’s dreams of society and people rising up, barely another person appears onscreen besides him, a presence that carries such a ghostly wisdom. Pinky’s sharp bone structure and scraggly beard present a life lived, shadows caught under his cheekbones keep a world of experiences. The brief and direct addresses to camera lift Pinky out of reality.

Incredible use of offscreen sound summons the city. Restrepo never shows extras or life in Colombia, at least until the very final moments, pulling the film’s oppressiveness into sharp relief. Viewers have experienced a city, but through an utterly blinkered, addled view.

Los conductos carries itself like a midnight movie. Rather than like the early films of Pedro Costa, who deconstructed the essence of Jacques Tourneur to tell real stories from Fountainhas, Portugal, Restrepo interpolates real experience into myth, diving into the crushing difficulty of individual liberty while exploring, through his aesthetics, the pleasure that the hunt for meaning can bring.