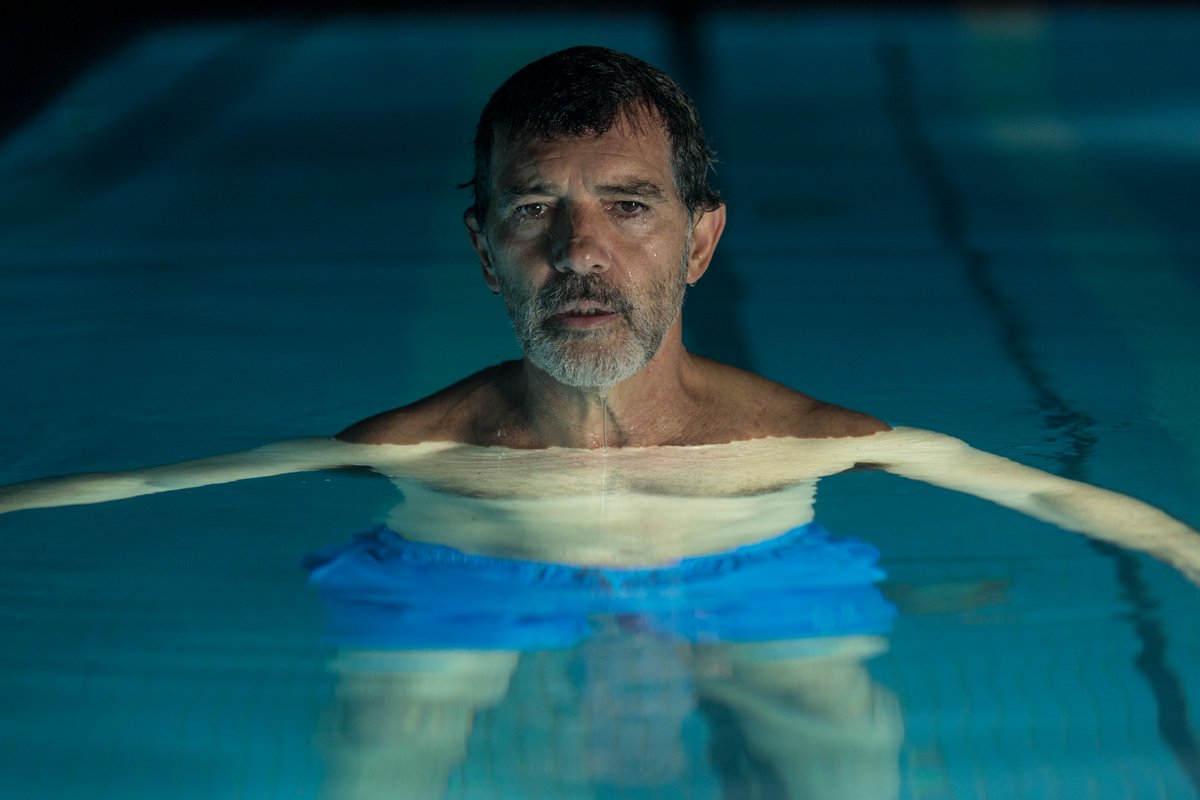 Within the first 15 minutes of Pedro Almodovar’s Pain and Glory (Dolor y gloria), the Spanish director confesses that his latest film is autobiographical. The protagonist, world-weary filmmaker Salvador Mallo (played in a career-best performance by Antonio Banderas), suffers from various medical conditions that have affected the way in which he views the world. Argentinian artist Juan Gatti helps illustrate the effects of these conditions on the character’s physical and mental state, making it difficult not to feel for Almodóvar for having to bare these correlating, nagging ailments on a daily basis. Pain and Glory’s central character suffers the effects of insomnia, migraines and tinnitus; the pain is so profound that he prays to God, whereas on the days where only one form of pain materialises, he’s an atheist. This is not the first time Almodóvar has used a filmmaking surrogate character onscreen, but there’s only one other film in his back catalogue where the character’s illness influences how he perceives his creations: 2009’s Broken Embraces (Los abrazos rotos).

Pedro Almodovar’s Pain and Glory is an intoxicating look at Salvador’s childhood and former relationships, which all come rushing to the forefront of his mind when invited to a Madrid cinema to host a Q&A for a movie he made three decades prior. Film Comment’s Manu Yáñez Murillo notes that this echoes a recent Madrid retrospective for Law of Desire, which was released in the same year as the fictional film that Salvador looks down upon in retrospect (Pain and Glory was still being written when that 2017 retrospective took place). But even as many Spanish critics have noted that Banderas’ Pain and Glory performance directly imitates Almodóvar’s accent and many of his mannerisms, the similarities between the two begin and end with the aforementioned medical history, at least according to the director himself. By taking this claim at face value, Pain and Glory feels solely like a companion piece to Broken Embraces, an unfairly overlooked film largely omitted from the discourse surrounding Almodóvar’s 2019 release.

On a purely cosmetic level, Broken Embraces is the most immediate point of comparison within Pedro Almodóvar’s filmography. Both are centred on directors who have fallen out of love with the medium of film, coasting on various unfinished projects and trying to ignore all the adulation afforded to their previous crowd-pleasing hits. But more notably, both are about creators who have arrived at unexpected obstacles when creating new works due to the renewed relevance of unresolved emotional wounds. The two films couldn’t be more different; Broken Embraces eventually transforms into something closer to a thriller than the delicate character study it initially appears to be. But the protagonists of both films correlate with director surrogate characters that seemingly provide a commentary on Almodóvar’s own fluctuating relationship with his older work.

In Broken Embraces, Lluís Homar plays a screenwriter who goes under the pseudonym Harry Caine, after a traumatic incident in his past left him blind, never to return behind the camera to direct again. Within the film, he flashes back to his affair with Magdalena “Lena” Rivero (played by Penélope Cruz), a secretary that becomes the star of what transpires to be his final feature, a broad comedy entitled “Girls and Suitcases.” In the present-day scenes, it’s revealed that “Girls and Suitcases” was a mainstream hit, but it’s something the former director now looks down upon. Overhearing scenes play out during a TV rerun, he grows annoyed that he could have ever used such lifeless takes in the finished product, and that nobody seemed to particularly notice that his actors didn’t reach the material’s comedic potential. This film within a film is not a particularly subtle re-imagination of Pedro Almodóvar’s own mainstream comic hit Women on the Verge of a Nervous Breakdown, with the director essentially recreating various sequences from that film with Cruz in one of the leading roles. As a result, it’s not difficult to imagine Pedro Almodóvar’s own commentary on his earlier film shining through, and it’s these regrets that link Broken Embraces with Pain and Glory.

What differentiates Almodóvar from the screen surrogates is that he’s never exactly disowned these earlier films; following Broken Embraces, he even helped adapt Women on the Verge of a Nervous Breakdown into a stage play for London’s West End. And in Pain and Glory, even as the film begins with a director similarly looking down upon the mistakes of a broad comedy he made decades earlier, his regret is entirely due to his relationship with his fictional lead actor, just as Harry Caine’s view of “Girls and Suitcases” was soured due to what the aftermath of that shoot would lead towards. So why does Pedro Almodóvar repeatedly return to metatextually criticising his earlier works — using thinly-veiled films within his films to connect the creations of characters with those of his own while analysing their perceived shortcomings in the process — if his protagonists don’t neatly align as director surrogates? 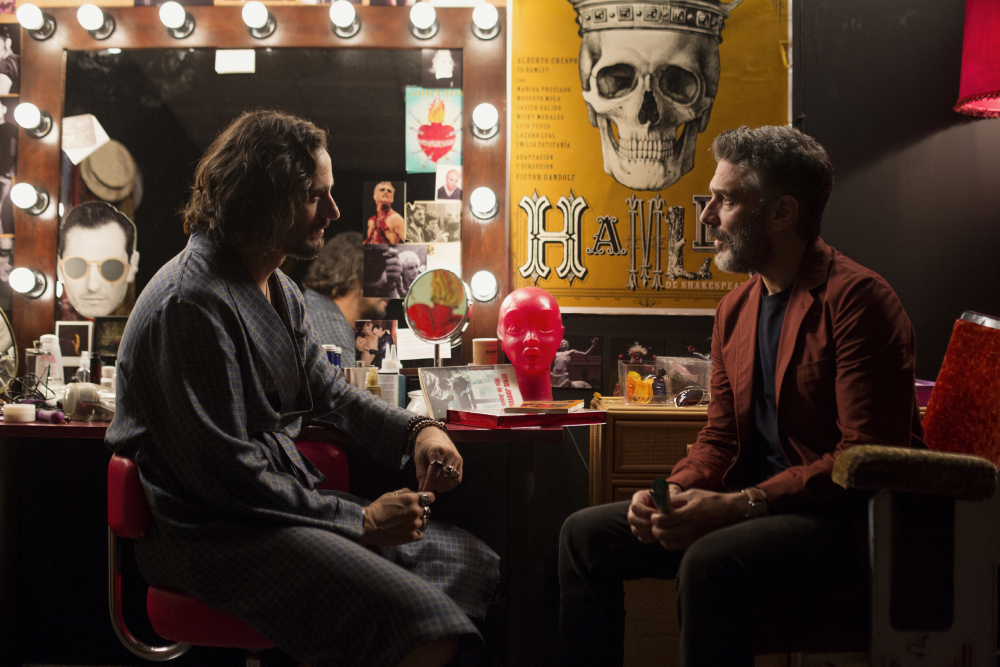 The answer may lie in the medical histories of Pedro Almodóvar’s characters, which constitutes the only confessed aspect of autobiography within Pain and Glory. Almodóvar famously wears sunglasses at all times due to the fact that he gets intense migraines if he views natural light. In a 2016 interview with The Guardian, Almodóvar remarked that he doesn’t “go to award ceremonies because TV lights mean having a migraine the whole evening, so the press in Spain think I feel scorn for the ceremony.” When viewing the world through this lens, it’s not hard to see why he would use a blind screenwriter as a surrogate, as even if Almodóvar still has his sight, he mostly sees the world through shades, never getting the full picture. Both Broken Embraces and Pain and Glory were made after his 2007 diagnosis of tinnitus in one ear, with the former film directly following this particular moment in Almodóvar’s life. The sequence with Harry Caine leaning into the TV, analysing the awkward dialogue rhythms of his former actors, seems to be something Almodóvar wishes he could do with greater clarity. After all, having a clear sense of sight or the ability to hear past mistakes becomes harder when diagnosed with conditions that irreparably change a relationship with a medium that rewards clarity of sight and hearing. This very prominent impediment has naturally shifted the way Pedro Almodóvar’s views previous films, knowing that he has to lean in closer and pay fuller attention, becoming more critical of the mistakes he’s still able to uncover.

In the same interview, Pedro Almodóvar confesses to increasingly living a life of solitude so he could maintain inspiration, and because of a fear that he’d become a misanthrope, and that he would be a “drag” to other people. Aside from depicting struggling creatives aiming to distance themselves from the past, the thing that connects the protagonists of both Broken Embraces and Pain and Glory is their increased detachment from the outside world as they advance in age, looking through their memories more than they look out of the window. It should be noted that Almodóvar has featured director protagonists before, with his 1987 film Law of Desire following a gay filmmaker who falls into a stereotypically melodramatic love triangle that only occurs because he refused to go on holiday with a lover in order to focus on his work. Even in Almodóvar’s earlier films, when he was more focused on capturing broad comic appeal, his creative onscreen surrogates were falling into problems because of their need for solitude.

By taking Pedro Almodóvar’s claim that Pain and Glory is only autobiographical in one regard at face value, it opens up an intriguing new way in which to view his films. Almodóvar consistently includes personal themes in his work, even in raucous genre fare such as The Skin I Live In. But by experiencing Almodóvar’s films as the product of a man whose view of the world is deeply affected by a variety of nagging medical concerns, only a few late period works thoroughly scratch under the surface of his psyche.