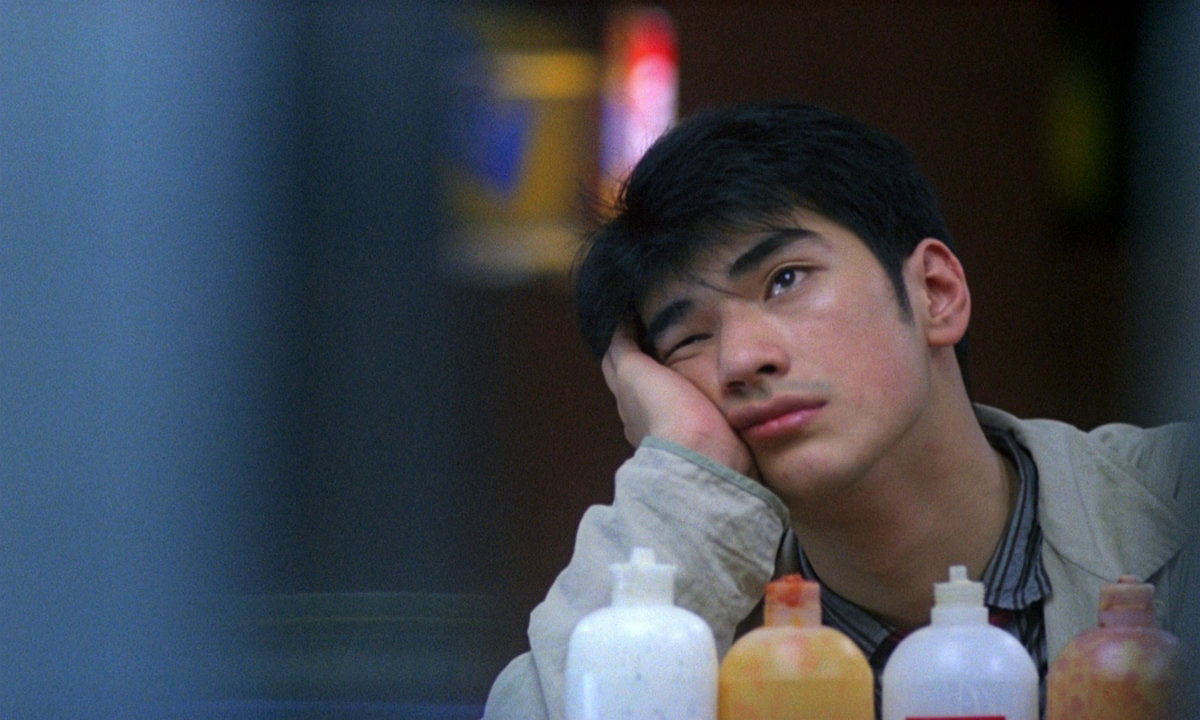 Wong Kar-wai’s Chungking Express (1994) is a one-of-a-kind masterpiece. It’s a film about identity, lust, longing and connection, and one constant throughout the interweaving narratives is the role of food. Far from the type of film where recipes and family histories are tenderly shared around the dinner table, or where the creation of the meal itself is an act chock-full of meaning, Chungking Express is more about the food you grab while running between two jobs, or the hungover days when you call for takeout from bed. It’s a peek inside the emotional lives of several people, and the significant role of quick, processed foods highlights the temporary connections and self-destructive tendencies that surround each of them.

In the first story, a naive and heartbroken police officer named He Qiwu (Takeshi Kaneshiro) desperately tries to get over his ex-girlfriend, May. The director also introduces a woman in a blonde wig (Brigitte Lin) whose role as a big shot in the drug trade has been threatened when she is double-crossed by a group of hustlers.

Stumbling through his post-breakup depression, Qiwu chows down on cheeseburgers in front of the flashing golden arches of a McDonald’s neon sign and comes up with a plan. For each day in April, he’ll buy a can of pineapple with the expiration date of May 1st. By then, then he’ll be ready to move on from his ex. After weeks of purchasing cans of pineapple, he goes home to eat all 30 cans he’s saved up over the month. 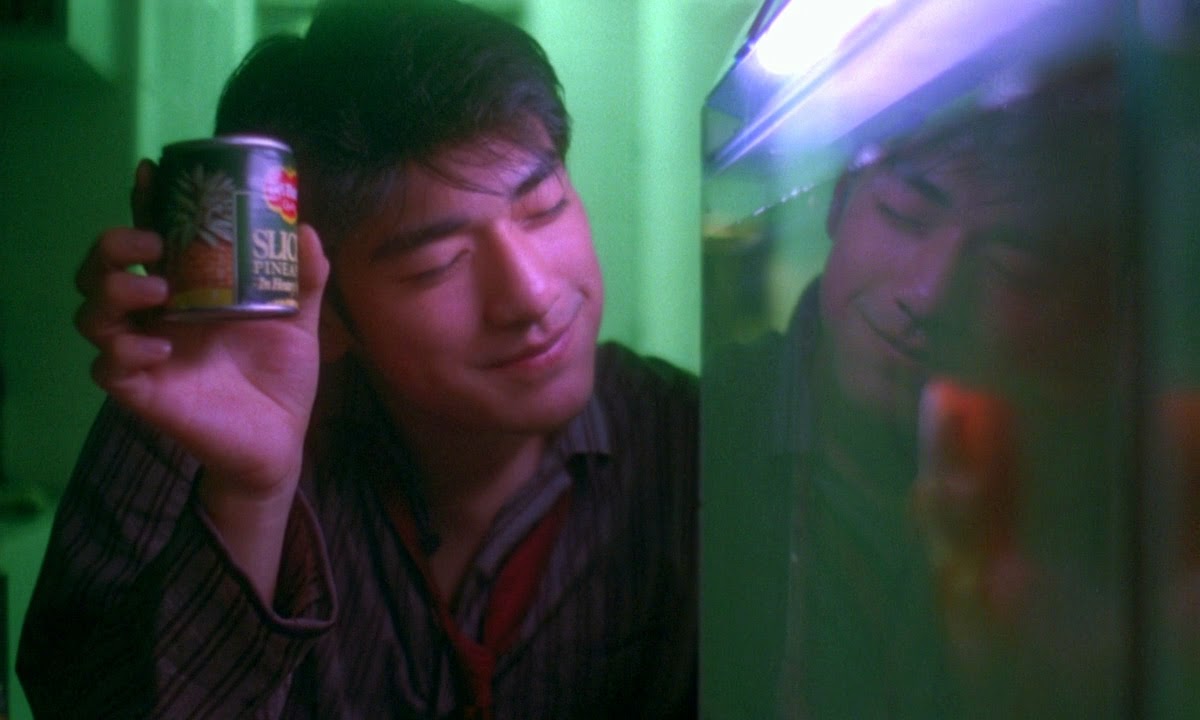 Sick with stomach pains and heartache, Qiwu heads to a bar and decides to fall in love with the first woman he sees — which happens to be the woman in the blonde wig. After rejected advances and a mostly one-sided conversation, the woman agrees to accompany Qiwu to a nearby hotel to rest. When she falls asleep, he orders as much room service as he can, including four chef salads and several plates of french fries and greasy cheeseburgers. Qiwu eats until he’s stuffed and leaves.

Qiwu makes himself sick from eating 30 syrupy cans of expired pineapple, a plan he followed through with as a manifestation of his heartache. His self-destructive habits in life and love are made even clearer when he gobbles up McDonald’s cheeseburgers and shoves his face with room service later, no doubt trying to replicate the fullness of love and connection that he misses with May, but mostly just finding discomfort and loneliness.

The woman in the wig wanders around the Chungking Mansions looking for clues that will bring her to the missing drugs. She kidnaps the young daughter of a shopkeep who she suspects of having information, and takes her out for ice cream. After two large ice cream sundaes, the shopkeep calls with the information, and the woman leaves the girl at the ice cream parlor with her treats.

The woman in the wig’s lifestyle is reflected in those two ice cream sundaes — decadent, overindulgent and sickeningly sweet; expensive but quick to disappear, just like the drugs that fuel her business. 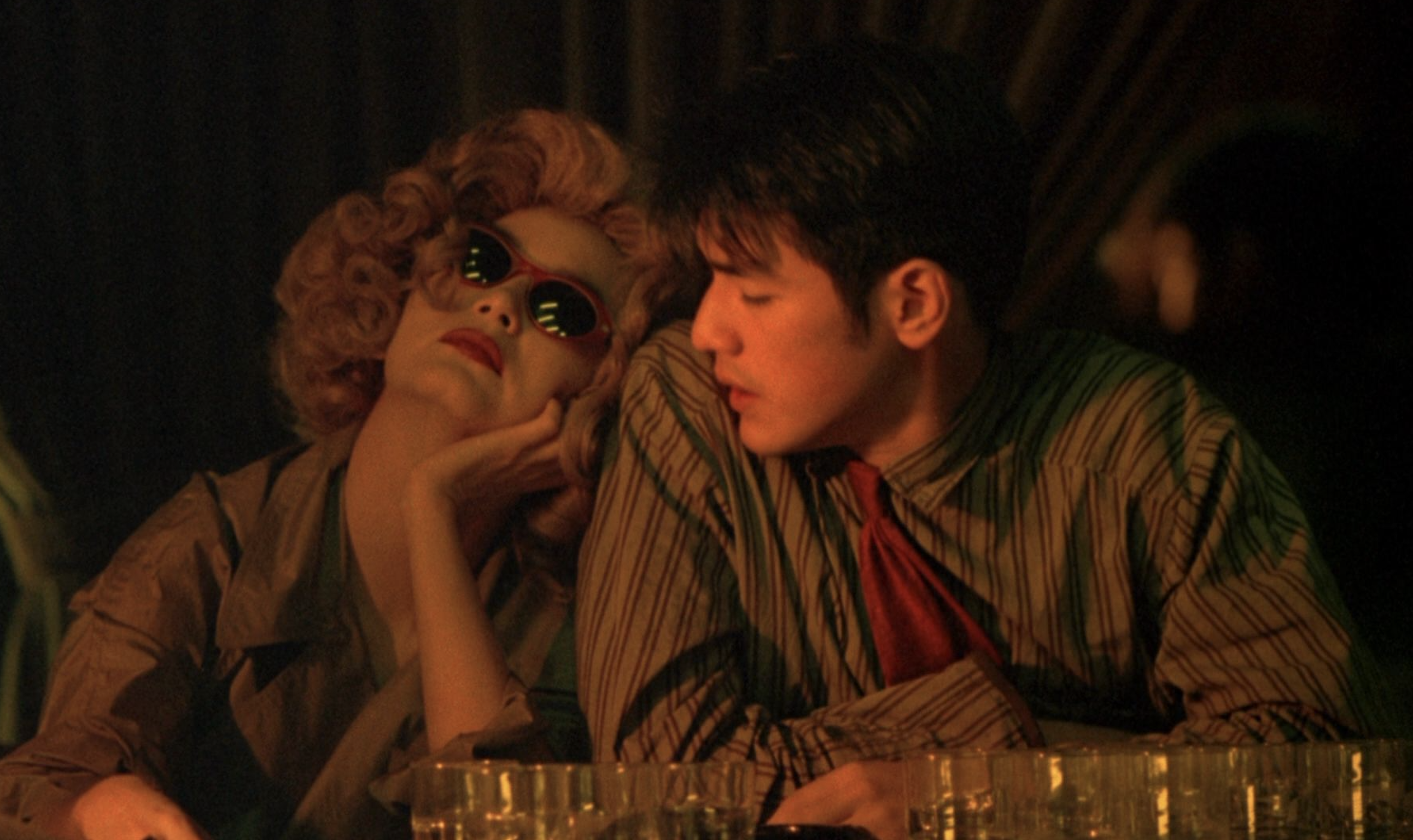 In part two, Chungking Express introduces a police officer only referred to as “Cop 663” (Tony Leung Chiu-Wai); a regular at Midnight Express who orders a chef salad for his girlfriend every night after his shift. One evening, the owner suggests he order something different for his girlfriend, like fish and chips, pizza or a hot dog. The next day, Cop 663 returns and reveals that his girlfriend has left him, giving the excuse that “she wanted to try some new dishes.”

Romance is intrinsically tied to the foods that Cop 663 orders from Midnight Express because he’s ordering them for his girlfriend. When she leaves, she tells him it’s so she can “try some new dishes,” rejecting not only the same old deli food he quickly grabs for her each night on his way home, but also their relationship as well.

The new waitress, Faye (Faye Wong), and the cop begin bumping into each other more and more frequently. At one point, she runs into him as he’s having a large lunch of fried rice, and he offers to help her carry a heavy basket of fruit back to Midnight Express. She runs into him several more times before she decides to take the extra apartment key his ex-girlfriend had left at the deli, and sneak inside his home while he’s out. Her visits include cleaning the kitchen and the bathroom, rearranging the furniture and small items, and eating huge bowls of ramen.

Cop 663 begins to recognize the connection and the growing attraction between him and Faye. He visits her at Midnight Express, and she lectures him for ordering a black coffee, recommending water for his health and a good night’s sleep. 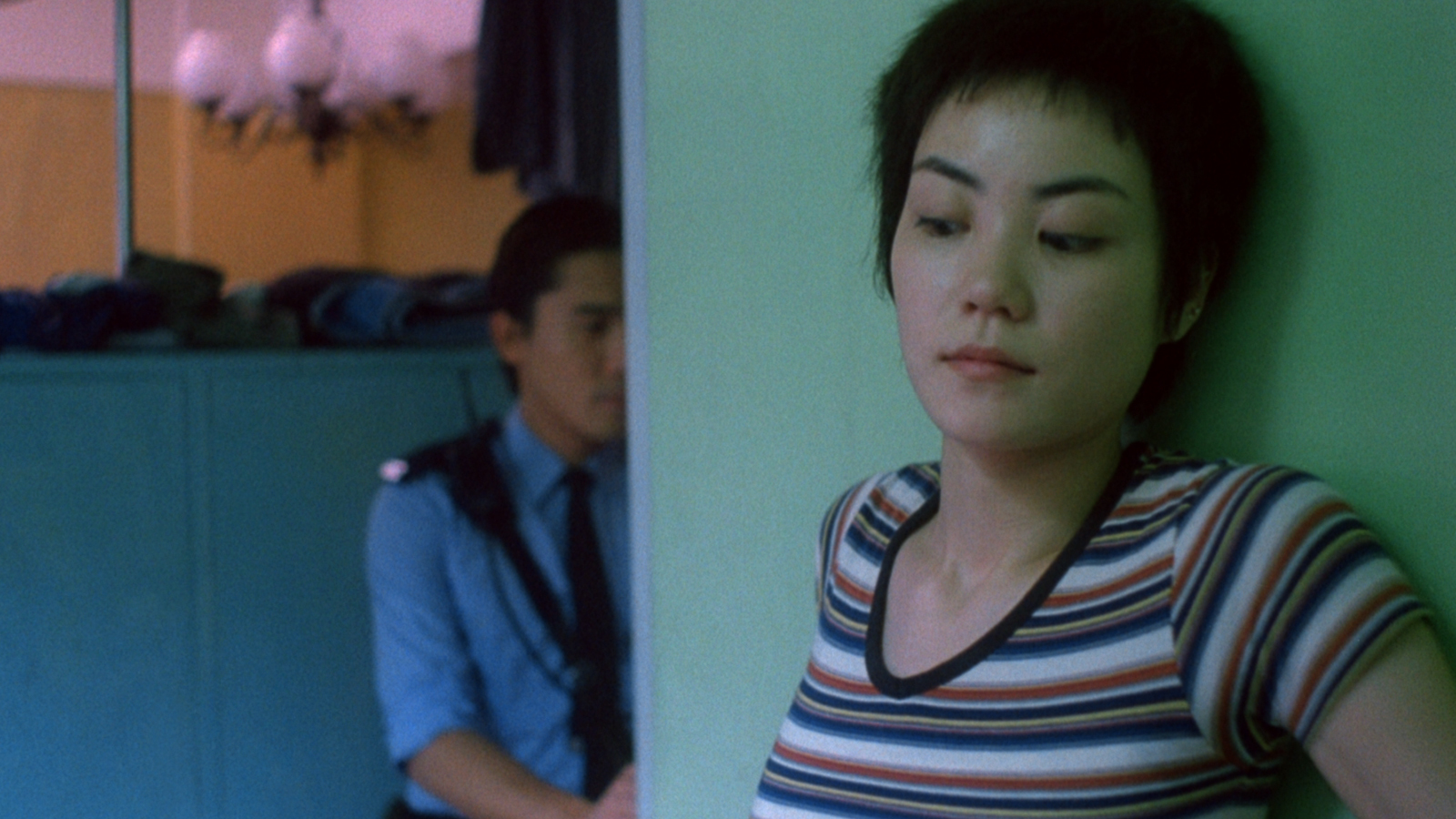 One year after leaving her job at Midnight Express to become a flight attendant in California, Faye returns to find that Cop 663 now owns the deli, and the film ends without revealing whether or not they continue their relationship.

When the cop stops devouring the huge bowl of fried rice to help Faye with the fruit basket, the presence of ripe, fresh fruit and his willingness to assist nurtures the possibility of a healthy, sustainable relationship between them. When Faye suggests that he replace drinking black coffee every day with drinking water for his health, it does the same thing and shows a kernel of long-term, good-for-you love and connection. It’s now up to them to see it through, or to let it pass by.

As quick as it takes to down 12 ounces of Coke in Chungking Express, lovers turn back into strangers. It only takes 30 cans of pineapple to move on from an ex; barely an evening later, the opportunity arises for more food, more affectionate moments and more romantic possibilities with someone new.

Food, particularly junk food, plays a large role in Chungking Express by signifying the type of sweet but ultimately fleeting connections (and self-doubt) that occur so frequently for the characters in the bustling Chungking Mansions.

Emalie Soderback (@esoderback) lives in Seattle, Washington and works at Scarecrow Video and seasonally for Seattle International Film Festival. She has a B.A. in Film Studies and is particularly fond of horror film and true crime, especially when it combines with a focus on feminine identity.