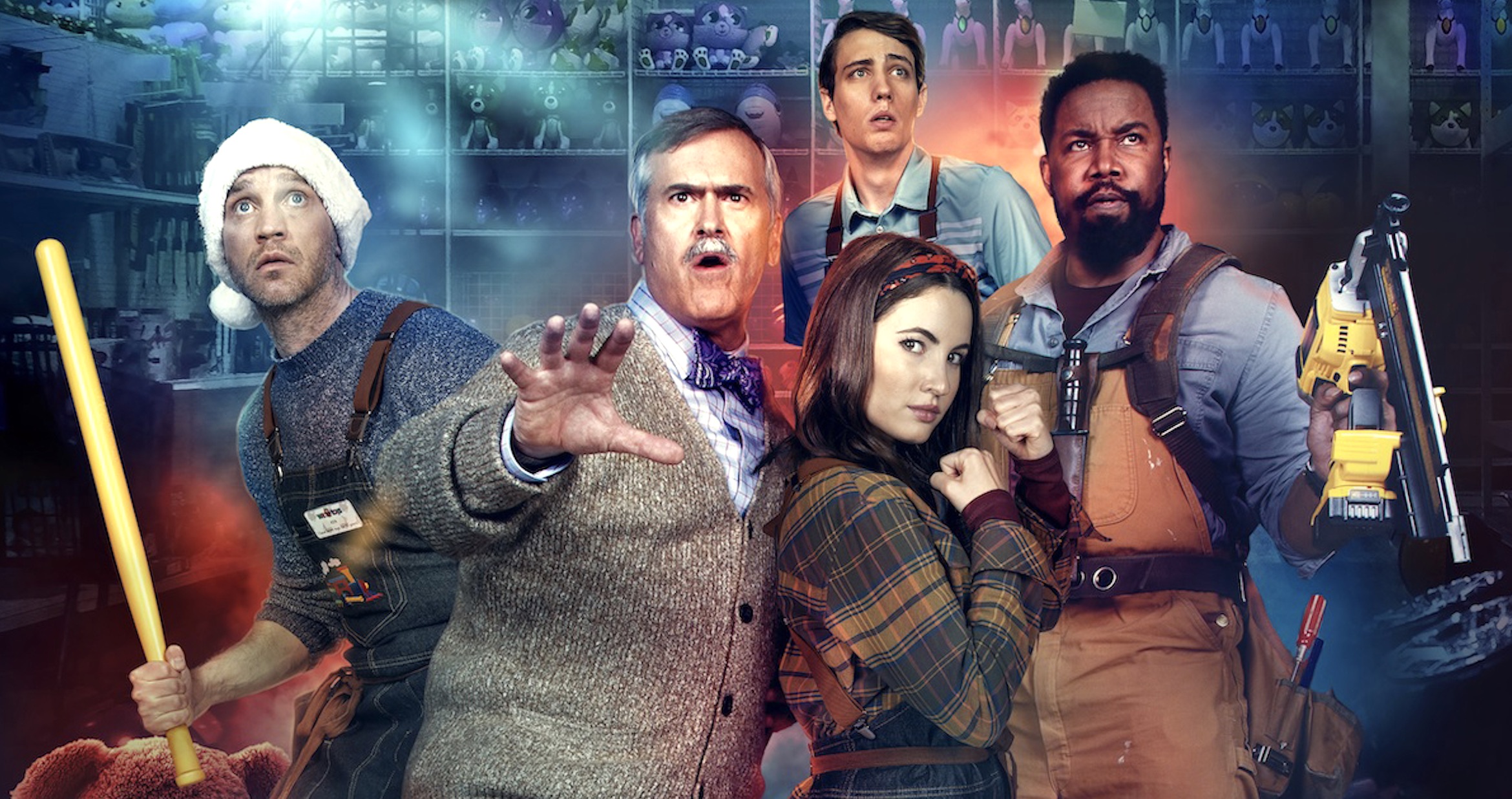 Christmas is scary, or so the recent glut of festive horror movies would have us believe. Krampus, which is among the best of these poisoned candy cane flavored offerings, opens with horrifying footage of shoppers trampling each other to get the best holiday deals. Black Friday, the latest offering from filmmaker Casey Tebo, takes that sequence to its unnatural conclusion by setting most of the action in a single megastore over Black Friday (hence the title). With shoppers eager for discounts and harried workers who’d rather be at home, the scene is already set for carnage. Tebo, working from a script by newcomer Andy Greskoviak, ratchets up the tension by including a ravenous otherworldly presence that, if left to its own misdeeds, could destroy everything.

Black Friday’s goofy tone is immediately clear with footage of zombie-like shoppers clamoring to get inside the doors of a store. Although the scene pays homage to Edgar Wright’s celebrated Shaun of the Dead, there’s nothing undead about these people; they’re just normal folks driven to the point of mind-numbed madness by the Christmas rush. Meanwhile, an undulating mass threatens to unleash its terrible power on everything within a five-mile radius. Introduced crouching behind various items, this gooey creation is the work of SFX legend Robert Kurtzman, who has worked on everything from From Dusk Till Dawn to The Haunting of Hill House. Even when Black Friday is light on story — at just 80 minutes long, it’s a slight affair, and understandably so — the makeup and gore never let the film down. The effects are strong, gruesome and always given the requisite blocking and time to shine.

Also working in Black Friday’s favor is that everything takes a turn for the worse pretty quickly. Viewers are introduced to Devon Sawa’s struggling single dad and Ryan Lee’s shy germaphobe as the characters arrive for work in a massive toy store, and the horror unfolds from there. Tebo demonstrates an impressive control of scale; he’s clearly working on a meager budget, possibly even during the pandemic, and utilizes his one location brilliantly. Although the setting is ostensibly just a huge warehouse, the camera weaves down corridors and around corners to showcase the maze-like atmosphere, and how potentially difficult it would be to escape if one was cornered by bloodthirsty cretins. The origins of the extraterrestrial threat are left tantalizingly vague, though a news report playing in the background refers to recent meteor showers in the area. Elsewhere, Curse of Chucky is also briefly shown on TV; a fun nod to toy-based horror.

Given that Black Friday, at its core, is a relatively low-stakes festive horror with an infectious disease slant, there’s a terrific amount of character development. Each member of the main cast gets an opportunity to shine, from Michael Jai White’s gruff Archie to Stephen Peck’s bitchy Brian. Once the workers find themselves stranded in the store, they experience a collective existential crisis about how they got trapped in dead-end jobs, working over the holidays, in the first place. There are various interpersonal conflicts in Black Friday, including an inappropriate, fledgling office romance, but the group’s shared personal grief is the most potent element of this frequently very funny film — after calling the cops for help, Brian exclaims, “Did you know the police have a voicemail?!”

Elsewhere, the Black Friday score, by Fall Out Boy star Patrick Stump, is lively and keyboard-heavy, with the usual creepy Christmas songs spliced in here and there, for added texture. These disparate elements combine to create a cozy, festive atmosphere that’s energetically punctuated by moments of cleverly engineered gore. Sawa, the horror icon who memorably broke out in Final Destination, is virtually unrecognizable in the kind of role that Frank Grillo typically occupies, and he lets his natural charisma shines through.

As store manager Jonathan, the Evil Dead icon Bruce Campbell — introduced mighty chin first, as he should be — imbues his character with layers of sadness and regret over how little power he actually wields. In any other actor’s hands, Jonathan would barely register, but Campbell steals every scene while oozing charisma. Goosebumps star Lee also does great work as the Final Boy of the piece, as it were, but Ivana Baquero gives him a real run for his money as the plucky Marnie (she also ties her hair up as the situation escalates, which is sure to make female viewers cheer just as a similar moment did when Birds of Prey released in theaters). Although Sawa, Campbell and White are the biggest names on the call-sheet, the youngsters more than hold their own.

Black Friday is an ensemble piece, so it never feels like the action is being swayed in a certain direction to benefit one performer. If anything, the movie is a showcase for the special effects more than anything else. The creature design extends to a depressed teddy bear in a tie called Dour Dennis that, if the filmmakers have any sense, should be the focus of a spinoff production immediately. Considering that Tebo’s film is ostensibly a movie about the horror of Christmas shopping, the attention to detail across the board is impressive, from the employee uniforms to the layout of the store itself. If Black Friday never reaches the heights of something like Krampus or Better Watch Out, the film at least has the full courage of its convictions and commits 100 percent to the outlandish premise. Slight but fun, consistently entertaining, as well as reliably well-made and performed, Tebo’s low-stakes take on holiday horror is a lot like Christmas candy; Black Friday hits the spot, but you might be left craving something slightly more substantial soon afterwards.