Against the volcanic backdrop of Iceland, Isold Uggadottir’s And Breathe Normally (Andið eðlilega) is an exercise in humanity, empathy and how the isolating landscape feeds into our own sense of abandonment within society.

Living on the edge of society, young mother Lára (Kristín Þóra Haraldsdóttir) struggles to provide for her child, Eldar (Patrik Nökkvi Pétursson). Falling behind on rent and scraping together small change for the supermarket shop, Lára begins a trial work shift at Keflavik International Airport. After a chance encounter with asylum seeker Adja (Babetida Sadjo), both women’s lives are irrevocably changed. Uggadottir’s film is a haunting portrayal of social and economic injustice, humanised through the relationship between Adja and Lára. The former, a refugee from Guinea-Bissau, is stopped by Icelandic border control after Lára flags her passport as being fake. Undeniably, Lára is responsible for Adja’s current living circumstance; she’s homeless, separated from her daughter and at the mercy of the Icelandic immigration authorities.

Somewhere between the films of Ken Loach (socio-economic-political narratives) and Kelly Reichardt (deeply complex female characters surrounded by impressive and often intimidating terrain), Uggadottir’s And Breathe Normally evokes a whole new style of Icelandic cinema, one which is inseparable from the country’s physical existence. 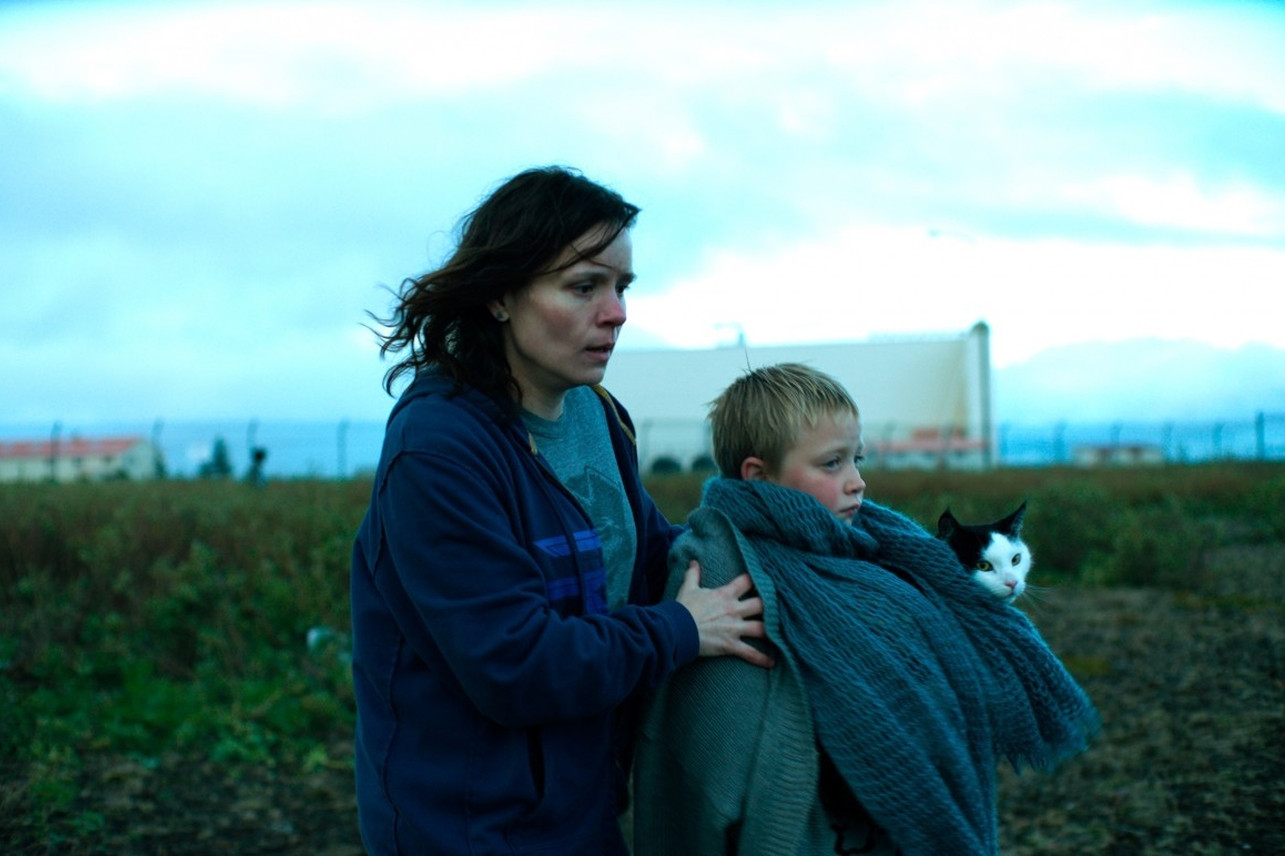 Iceland is a small country with a miniscule population (roughly 338,000), which makes it the one of the smallest populations per square mile in the world. In addition, Iceland has a hostile landscape, as it’s located in the middle of the North Atlantic and Arctic Oceans. Iceland was also hit hard by the financial crash in 2008, so And Breathe Normally feels intrinsically linked to events of the recent past. The physical setting of Lára and Adja’s story is in this foreboding landscape. Initially, Lára and son Eldar live in a housing estate on the Reyjanes peninsula — a desolate rocky stretch of land where wind can be heard whipping around the corners of the thin walled buildings; a tiny patch of grass is the only greenery to be seen for miles. Lára and Eldar’s home is framed by the almost black ocean and a long stretch of motorway — equally endless.

Uggadottir utilises these bleak visuals to foster the tension between Lára and Eldar. In terms of society, they are in the middle of nowhere; they have been forgotten about. When the two end up sleeping in their car, Uggadottir shoots from a distance, rendering the car small and insignificant against the backdrop, much like Lára and Eldar are small and insignificant to society at large. And just as the film’s exteriors are unwelcoming, so are Uggadottir’s interior settings. The airport, Adja’s accommodation, Lára’s apartment and even the school are all designed with varying shades of brown and grey. Welcoming colours are not found in And Breathe Normally, as neither Lára nor Adja have a place to call home, a place where they feel safe.

As much as Uggadottir’s film is about the socio-economic landscape of Iceland and beyond, it is equally focused on female issues. From Lára’s struggle to give her son a stable home to the persecution faced by Adja due to her sexuality and gender, And Breathe Normally speaks volumes about issues faced by women. The strength in unity is apparent, as Adja takes Eldar to school so that Lára can go to work. Also, the issues that Adja faces as a refugee are not the same as the men in her situation — though everyone in the refugee accommodation is kind to her, there is a constant low-level anxiety about what may happen to her because she is a woman.

As the film progresses, the focus becomes less about Lára attaining some kind of financial security and more about her moral responsibilities. Getting the airport job will mean an end to her poverty. The decision she faces could come at a significant cost to herself and Eldar, but And Breathe Normally is concerned with Lára becoming a different kind of person. To begin, Lára is defensive, and rightly so. She and Eldar are in a precarious position, and it is only natural for Lára to want to defend her son at all costs. Crossing paths with Adja seems to soften Lára’s outer edges.

Uggadottir’s And Breathe Normally will undoubtedly receive heavy praise due to its timely portrayal of asylum seekers, the vilification of the LGTBQ community and the widening rich/poor gap in Western countries. These themes are important, but And Breathe Normally doesn’t just use these newly trending topics as a sell, as they are explored through authentic and genuine characters who are far more than stereotypes. The backdrop of Iceland only adds to these characters’ motivations, and contextualises them in a world where human empathy and kindness seem to be vanishing rapidly.

Becky Kukla (@kuklamoo) spends her days working in TV and writing about cinema and feminism. Based in London, she also likes drinking gin, re-watching ‘The X Files’ and writing about on-screen representation at femphile.com. She’s also a regular contributor at Bitch Flicks and Film Inquiry.