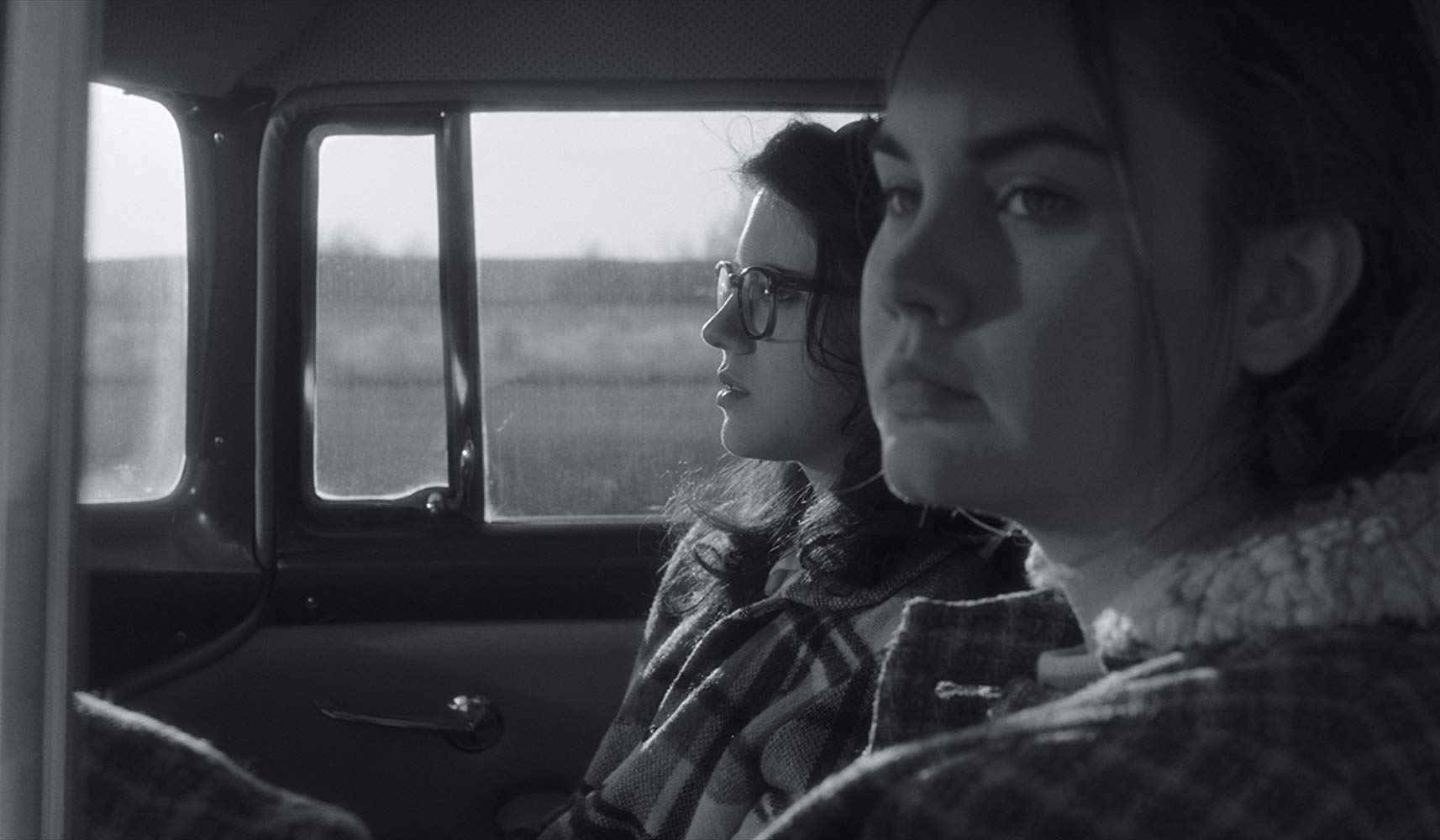 Early 1960s Oklahoma is an ideal setting for classic coming of age themes in Martha Stephens’ To the Stars. Richer in characterization and emotion than it is in plotting, the drama capitalizes on Andrew Reed’s beautiful monochromatic cinematography, with inky blacks and shimmering silvers aspiring to the same kind of nostalgia conjured by the legendary director of photography Robert Surtees in The Last Picture Show. Shannon Bradley-Colleary’s screenplay focuses on teenagers Iris Deerborne (Kara Hayward) and Maggie Richmond (Liana Liberato), two misfits locked in the age-old struggle to find acceptance and love in a stifling environment that prizes conformity and rewards narrow-mindedness.

Hidden behind owlish and ill-fitting spectacles, the introspective Iris fails to conceal the open secret of her urinary incontinence, an unfortunate condition exacerbated by the horrifying epithet “Stinky Drawers,” a nickname frequently hissed by the school’s clique of cruel kids. New girl in town Maggie sees right through the haters, recognizing in Iris a kindred outsider spirit. Maggie’s boast that her father shoots photographs for the venerable magazine Life — whether true or not — impresses all the queen bees, who would like to incorporate Maggie into their fold. In fact, Maggie offers the juicy tidbit regarding her father’s occupation as the reason for her recent relocation from a bigger city. Only later will Stephens explore the real reason behind the new town/new start change of address.

Stephens goes on to render the evolving friendship of the assertive Maggie and the timid Iris through common rites of passage that point toward the possibility of romance between the two. The director handles all the confused attraction with enough sophistication that the plot’s actual direction sneaks up in a manner that smartly defies cliche, as well as the audience’s first likely guess. The inevitable punishment for lesbian love still arrives right on time, complete with a melodramatic mob of stone-casters right out of James Whale’s Frankenstein — but en route, Stephens capitalizes on the revelation of an unexpected pairing.

Hayward and Liberato are supported by a cast that includes Malin Akerman, Tony Hale, Shea Whigham and Jordana Spiro as the parents of the girls. All four performers, contending with varying degrees of somewhat wispy roles, bring quality to the production. Spiro’s open flirtation with Iris’ classmate Jeff (Lucas Jade Zumann in a sensitive performance with echoes of Timothee Chalamet) recalls, of all things, a similar triangle in Martha Coolidge’s 80s teen classic Valley Girl. Whigham is especially warm as the father of Iris, as supportive of his daughter as he is frustrated by his spouse.

Stephens keeps notes of observational humor in the mix, but sticks to a serious-minded realization of the period through the eyes and experiences of the women in the story. This female-centric point of view undeniably unfolds as the greatest strength of To the Stars, as the aspirations and heartbreaks experienced by Maggie and Iris ripple out in waves familiar to many of the other women in Wakita, including the kind hairdresser Hazel (Adelaide Clemens). Any storyteller working with content set in an earlier time has the potential advantage of using the past to comment on the present, and Stephens certainly has much to say about the incredible pressure placed upon young women to fulfill the expectations of peers, family and community.

To the Stars, produced by Northern Lights Films (It Follows), premiered at the Sundance Film Festival in January 2019. A special screening at the Fargo Film Festival is set for Saturday, March 23 at 3:00 p.m. Members of the production team will participate in a Q and A.

Tagged as: Drama, Greg Carlson, Martha Stephens, To the Stars