While the premise of a revenge thriller starring Nicolas Cage might elicit reactions of disappointment, Michael Sarnoski’s debut feature Pig is a thoughtful exploration of a fine-dining chef turned truffle hunter’s quest to find his foraging eponymous animal. At times, the film bites more than its chews, but a soulful lead performance and assured direction showcases Cage’s indelible ability to make the silly into the poignant.

The Oregon-set Pig begins with the reclusive, cabin resident Rob (Cage) who carries out daily routines with his companion pig, a gorgeously rendered, orange furry being whose puppy-like affection towards her owner is depicted under intensely dark lighting, driving home the protagonist’s sense of isolation. Every Thursday, the young hotshot seller Amir (an assholish but endearing Alex Wolff) from nearby Portland pulls up in his yellow Camaro and collects fresh fungi from the scruffy hunter, reminding Rob both of human society and the complex ecosystem of the food industry, both of which have seen his absence for 15 years.

When Rob’s pig is kidnapped by home invaders, she helplessly squeals at her desperate owner, who is beaten unconscious. When Rob awakens, he enlists Amir’s help to drive him to Portland and find his beloved pig, a decision that leads both characters into the underbelly of not just the local restaurant scene, but their own pasts, filled with painful memories and callous people.

Through their trek in the storied halls of Portland’s food establishments, Amir realizes the high reputation of Rob when industry people are taken aback at the sight of him. Despite the respect, there remain some who belittle the legend. In a strange, Fight Club-esque sequence, Rob and Amir infiltrate a subterranean fighting ring for restaurant workers, and when Rob reveals his name, the workers stand in awe while others offer to fight. The scene could be an incisive study of the pent-up anger found in one of the toughest industries. Instead, the logic of the brutal combat is largely unexplored and the scene feels preposterous. 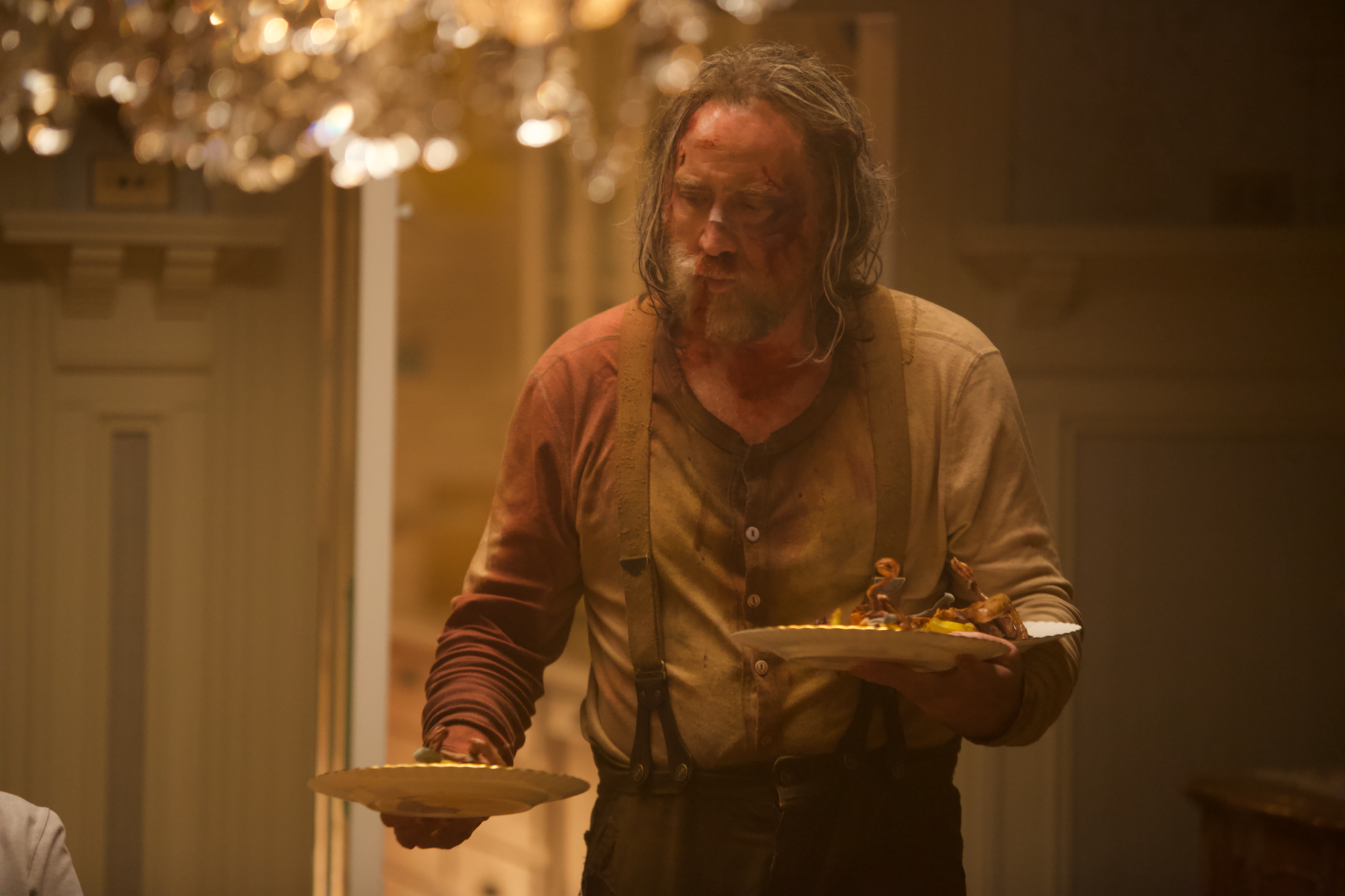 Sarnoski and co-writer Vanessa Block clumsily straddle the line between the inexplicable and practical, crafting essential developments with sloppiness. Consider a moment when Amir confesses to Rob that his mother killed herself. In a later scene, the young man visits a hospital and sadly speaks to his mother who appears in a vegetative state. Pig never quite clarifies the backstory of Amir’s mother, relating to the excursion into the underground ring. In both scenarios, key elements are left unexplained and the film’s penchant for imagery over a clear story logic is especially felt.

Cage elevates Sarnoski’s visuals. The actor is a vortex of emotions that quietly burn beneath a lonely exterior. As Rob, Cage plays a version of himself, a remnant from the past who shows his hushed demeanor and expert skillset to the current crowd, garnering respect and reminding spectators of his talent. Sarnoski’s revenge film may invite comparisons to Vengeance: A Love Story or Mandy, further enriching the meta-sensitivities of Cage’s layered performance. Wolff is a strong pick for the confident Amir, who is later revealed to be in competition with his imperious father (a domineering Adam Arkin). Wolff portrays Amir as an overzealous but deeply hurt son and Pig’s stronger elements include the ways in which Amir becomes likable throughout the film, transitioning the audience’s perception of him. It’s a remarkable achievement that is solidified through the relationship between Rob and Amir, an unlikely pairing that is wondrously rendered, with tasteful quips and sarcasm (Amir tells a peer who suspiciously looks at the disheveled Rob, “he is a Buddhist”). 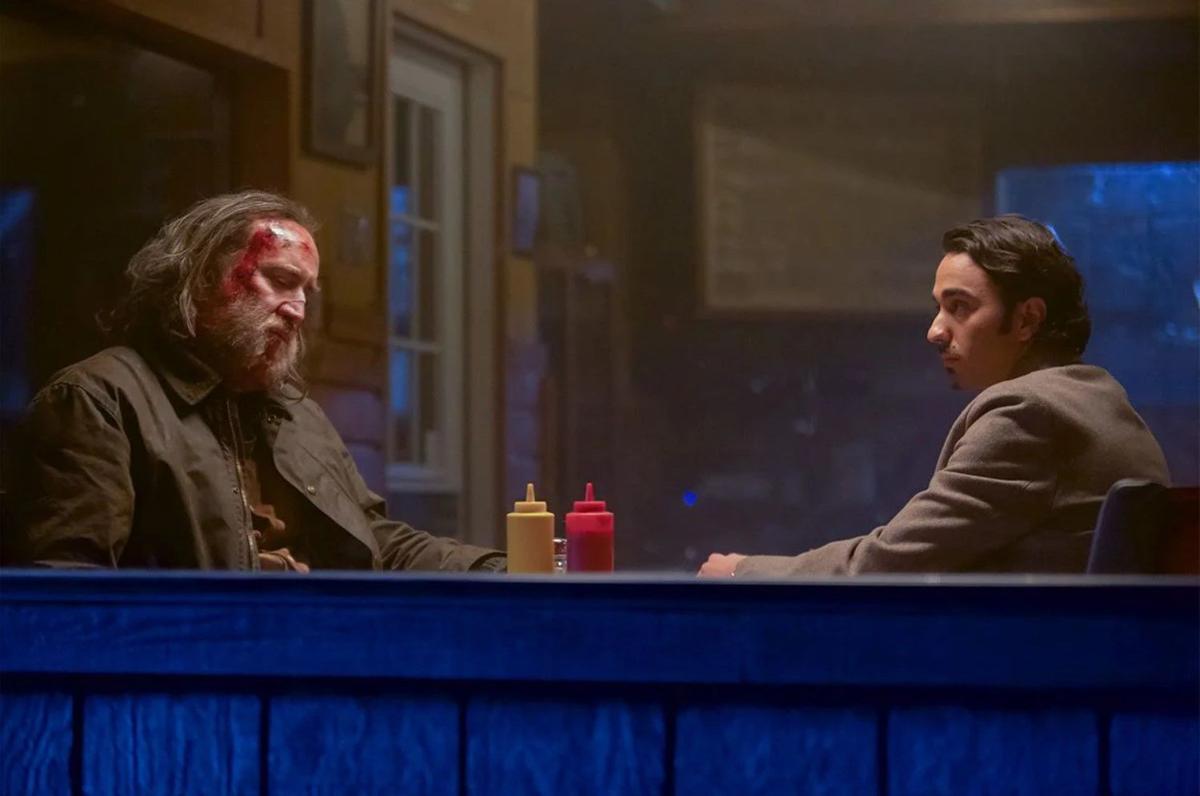 Rob maniacally screams at a bike owner after stealing his bike and the truffle hunter sneaks into the backyard of his old home and ends up speaking with a child. Through Cage’s facial movements and cinematographer Patrick Scola’s drab environments, these scenes feel poetic. Even though such moments lack explanation, their power is finely conveyed, contrasting with the more imperfect scenes.

Though Pig manages to be moving, such scenes make one wish for seconds.