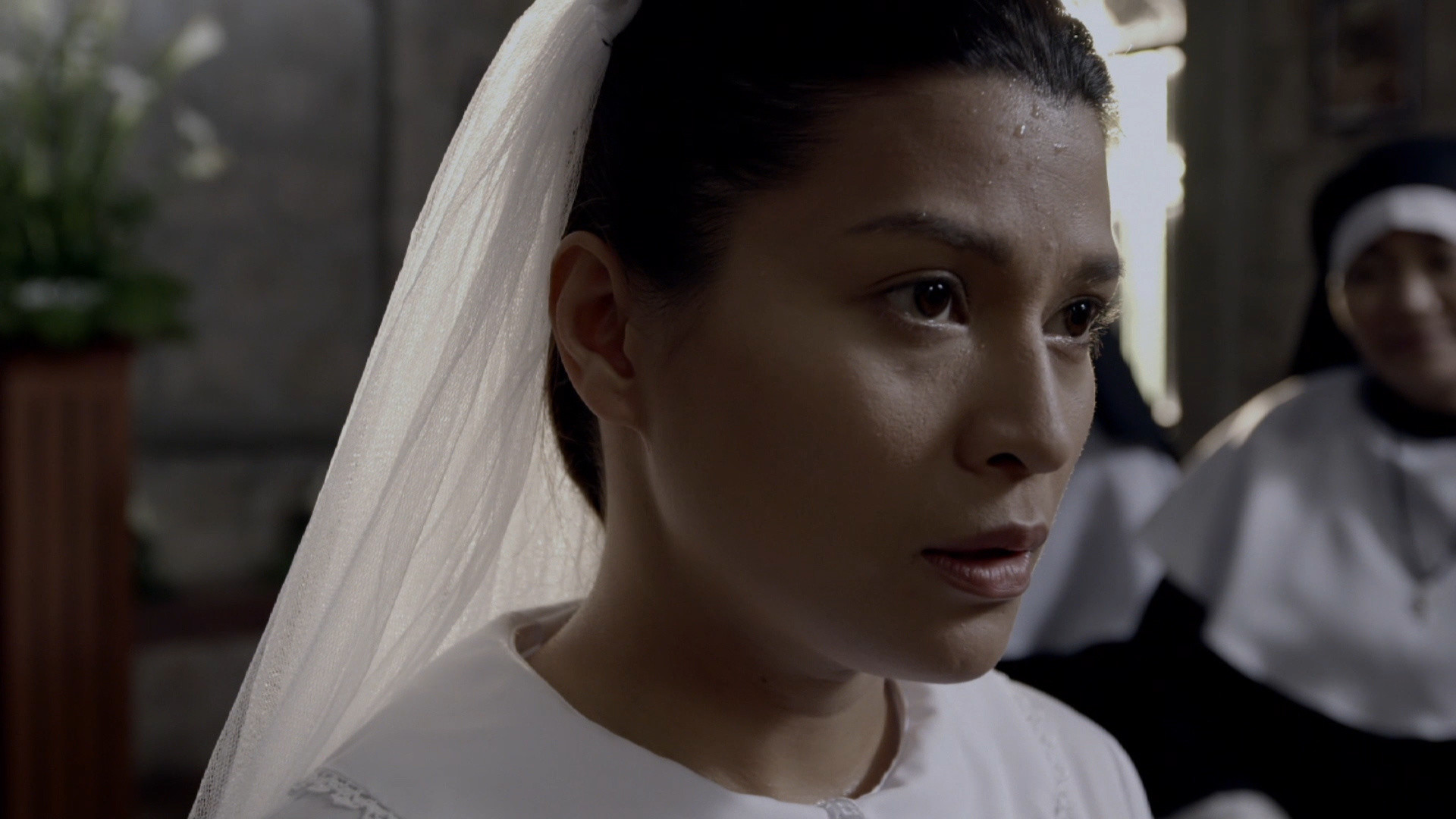 The power of the nun as a cinematic image is merciless. It may be the stark black and white of the hood, exposing a bare face that begs for close-up. Perhaps it is the secrets the nun may hold — not only of their past, but of what they find in God. In Anna Karina’s fashion vehicle for Jacques Rivette, La Religieuse (1966), sexual liberation is a distant goal, while in The Devils (1971), they’re already at it. In Pedro Almodóvar’s Dark Habits (1983), sex is not enough, and God is found in the eye of the heroin needle. Abel Ferrara ironised the iconography further in Ms .45 (1981), a film of reactionary violence which thematically contrasts with the behavior of Julie Andrews’ Maria von Trapp, The Sound of Music protagonist who captures the heavenly liberation of experiencing the earth as she makes the Hegelian revelation that the hills are literally alive. She sings well, but not as well as Lauryn Hill’s Rita Louise Watson in Sister Act 2 (1993). If heaven is a place on earth, though, it’s probably in Kathleen Byron’s eyes in Black Narcissus (1947), even if she herself sees hell. And we haven’t even begun to pray at the altar of Nunsploitation. Isabel Sandoval, aware of the aura of the cinematic nun, allows the more hallicinatory aspects of the convent to seep into Aparisyon (Apparition), a chamber piece that sees vast social conflict from a space that may as well be a world away, until it isn’t.

As part of Locarno’s truncated response to the global pandemic and social distancing measures, the 2020 festival features an “Open Doors” online strand to highlight films from the Philippines, Myanmar and surrounding nations until August 15. Digital filmmaking has opened up the possibilities for Filipino cinema to take on a grittier and more social realist aesthetic. One of the most recognizable names on the slate is Sandoval, whose Lingua Franca was a hit on the festival circuit in 2019. Apparition, from 2012, is her sophomore film, which explores Catholicism’s restrictive effect on women in a Filipino monastery, as offscreen President Ferdinand Marcos begins to enact Martial law.

Isolated in a tropical forest in the Rizal province, the Adoration monastery is an ominous maze of corridors and white walls, filled with religious ornaments that seem dislocated from the space itself. Sandoval’s use of digital flattens light around the frame to make Adoration seem almost protestant, like a Dutch genre painting. The sound of crickets populates the soundtrack, even when every shot is populated with a painting or prop that calls to the Virgin Mary. That subtle clash of sound and image reminds the viewer that Catholicism has been imposed onto the Philippines, and has a way to catch up with the land’s spiritual properties. 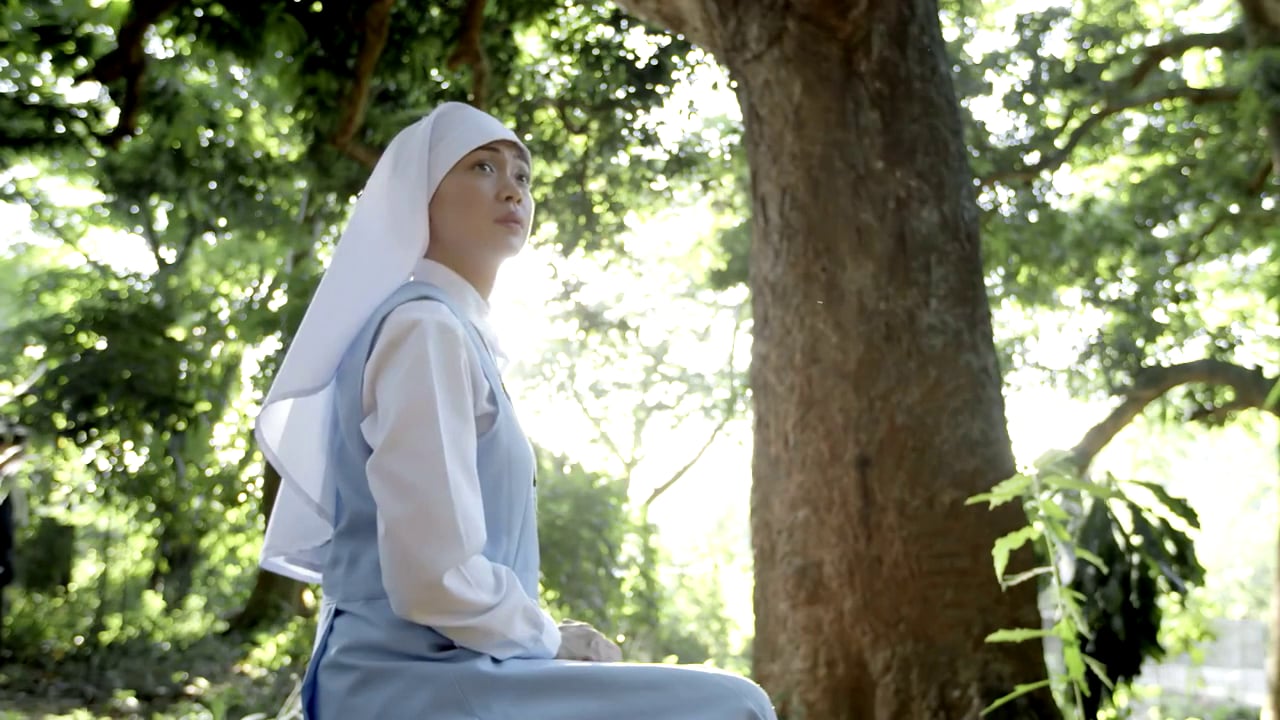 As Martial law looms, Sister Remy (Mylene Dizon) recalls a trip to town and witnessing civil unrest. Newsreel images are projected over her face, bringing film clips onto the digital landscape of Sandoval’s technology. The director skillfully moves between realism and onerism, with her blurring of visual rules reflecting the nun’s own political awakening. Soon, Sister Remy is visited by her mother, who clutches at the monastery gates from outside and tells her daughter that her brother is missing, presumably because of the regime.

To read Aparisyon in terms of its authorship also adds an appealing dimension. Sandoval has since relocated to New York where she tells stories of Filipino diaspora. That same feeling of dislocation is found in her 2020 film, as Sister Lourdes adjusts to life in the monastery while the country she knew plunges further into the abyss. Lourdes attempts to become an extern, to taste freedom while out running errands. Aparisyon was made before Sandoval transitioned, and she is credited on the film by her dead name. The nun metaphor takes on new suggestions of liberation and repression when considering Sandoval’s own history. 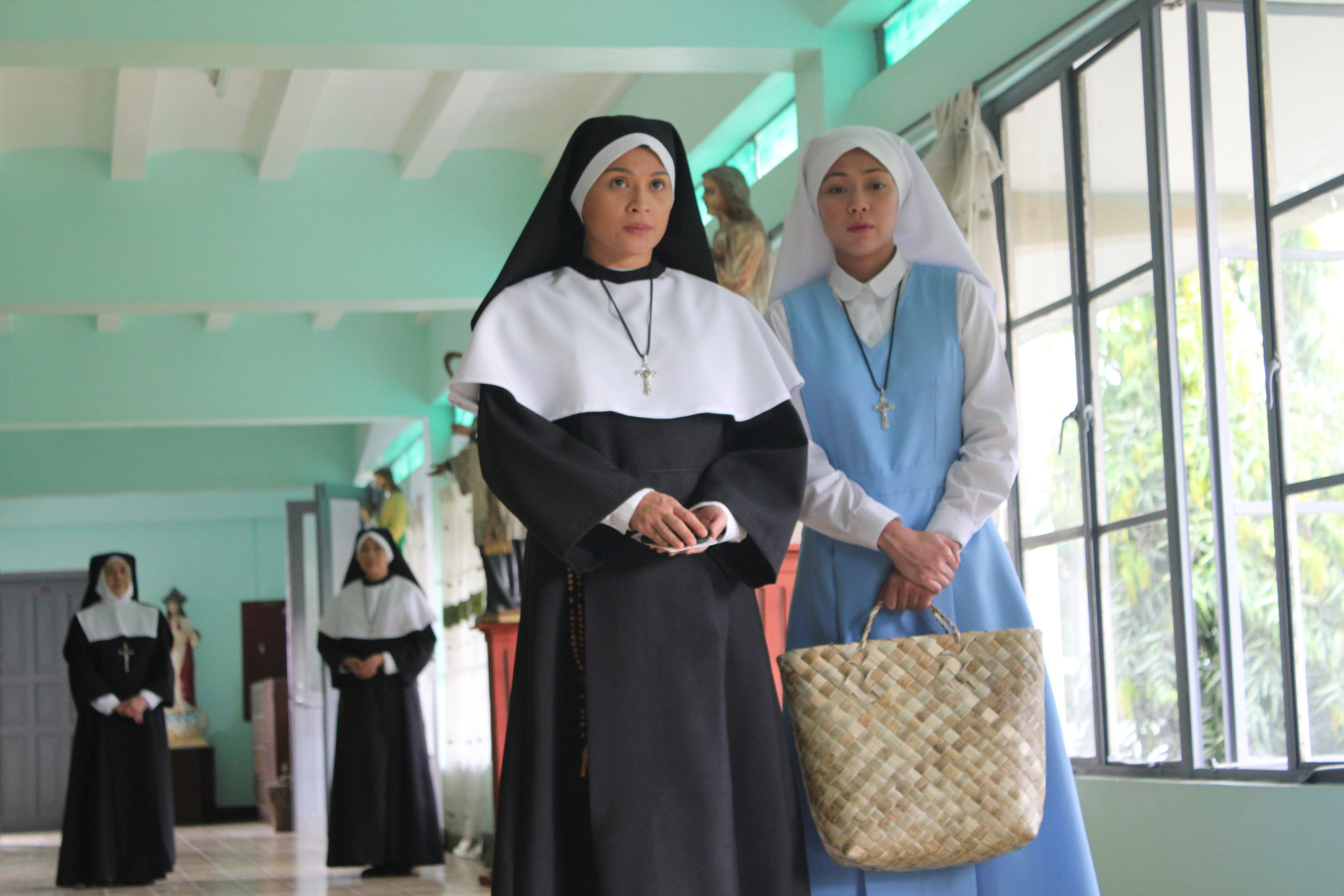 Remy begins to help the families of other disappeared people. Back at the monastry, she hides a copy of Paulo Freire’s Pedagogy of the Oppressed (1968) under her bed. That book’s argument for something approaching a collaborative learning practice over a piggy bank of knowledge method goes pretty stridently against a Catholic way of teaching; God’s a bit of a one way street. But it’s how she learns to communicate in practical ways with the bereved.

Slowly, the two nuns are forced to see the parallel between the authoritarian Marcos regime and Catholic practices, from punitive punishments to a doctrine based around greed, wealth and tribute. Sandoval takes the narrative into violent territory that is inevitable but satisfying. Under the weight of those past nuns, and situating the film in a certain European art-house tradition, Aparisyon  cannot help but buckle a little. But it is a necessary experiment for a filmmaker who is only growing with each project, and whose ability to burrow under the skin of even the most ostensibly obvious characters is unmissable. It’s a fascinating experience to see Aparisyon via Locarno’s “Open Doors” strand, where it is presented as a key work in understanding contemporary Filipino cinema.