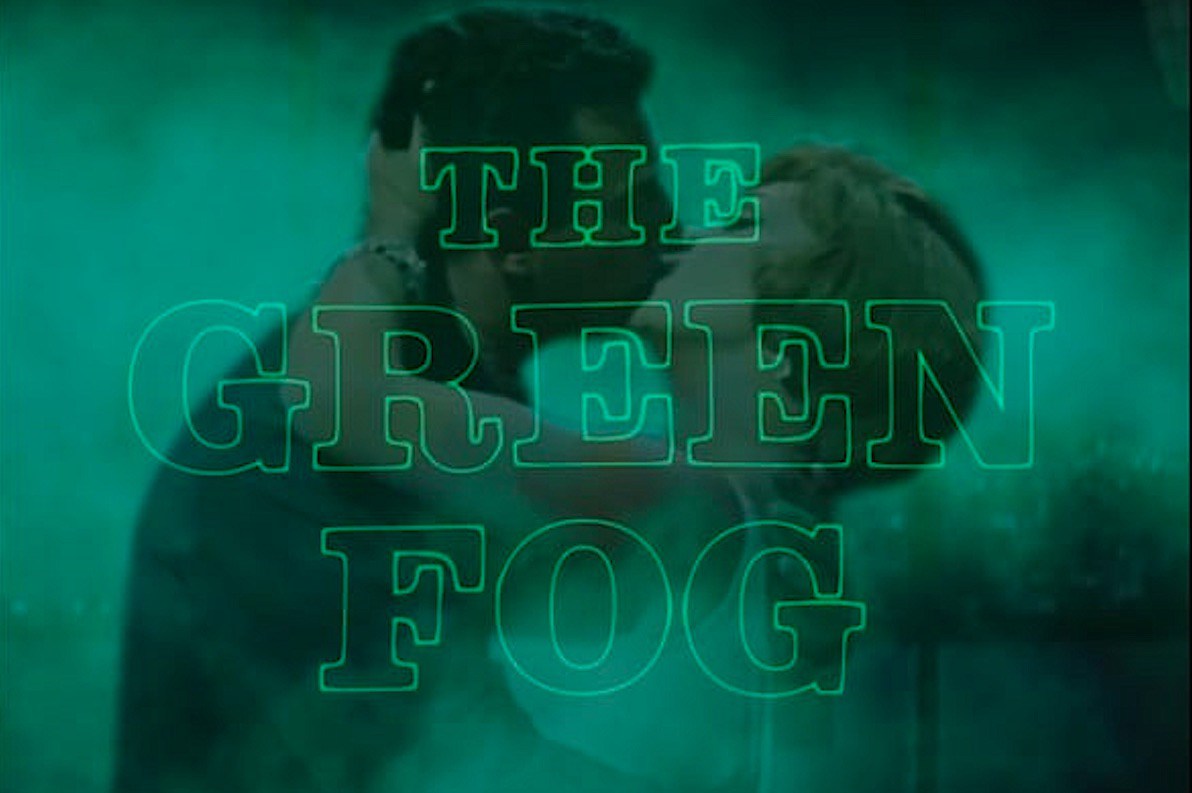 In 2017, the always vital Guy Maddin and regular collaborators Evan and Galen Johnson were commissioned by the San Francisco Film Society to create some kind of city-themed motion picture homage/tribute in collage form for the 60th San Francisco International Film Festival. The movie that resulted, The Green Fog, has not been previously accessible to audiences outside of several big 2018 dates on the international film festival circuit. Finally, Maddin has remedied fan disgruntlement by making the superbly strange trip available to view free of charge on his Vimeo channel.

In an interview with Indiewire published at the time of the festival premiere in April of 2017, Maddin stated that he and the Johnsons initially approached their task by screening some 200 San Francisco-set movies and television shows at ramped-up speeds, mining the footage for key motifs. During that process, the spirit of Alfred Hitchcock’s Vertigo emerged as the central reference point around which The Green Fog would come to be organized. At just over an hour, the final product is a glorious and triumphant metanarrative to be cherished by Maddin’s fellow film-obsessives and lovers of the Master of Suspense’s 1958 gift that keeps on giving. 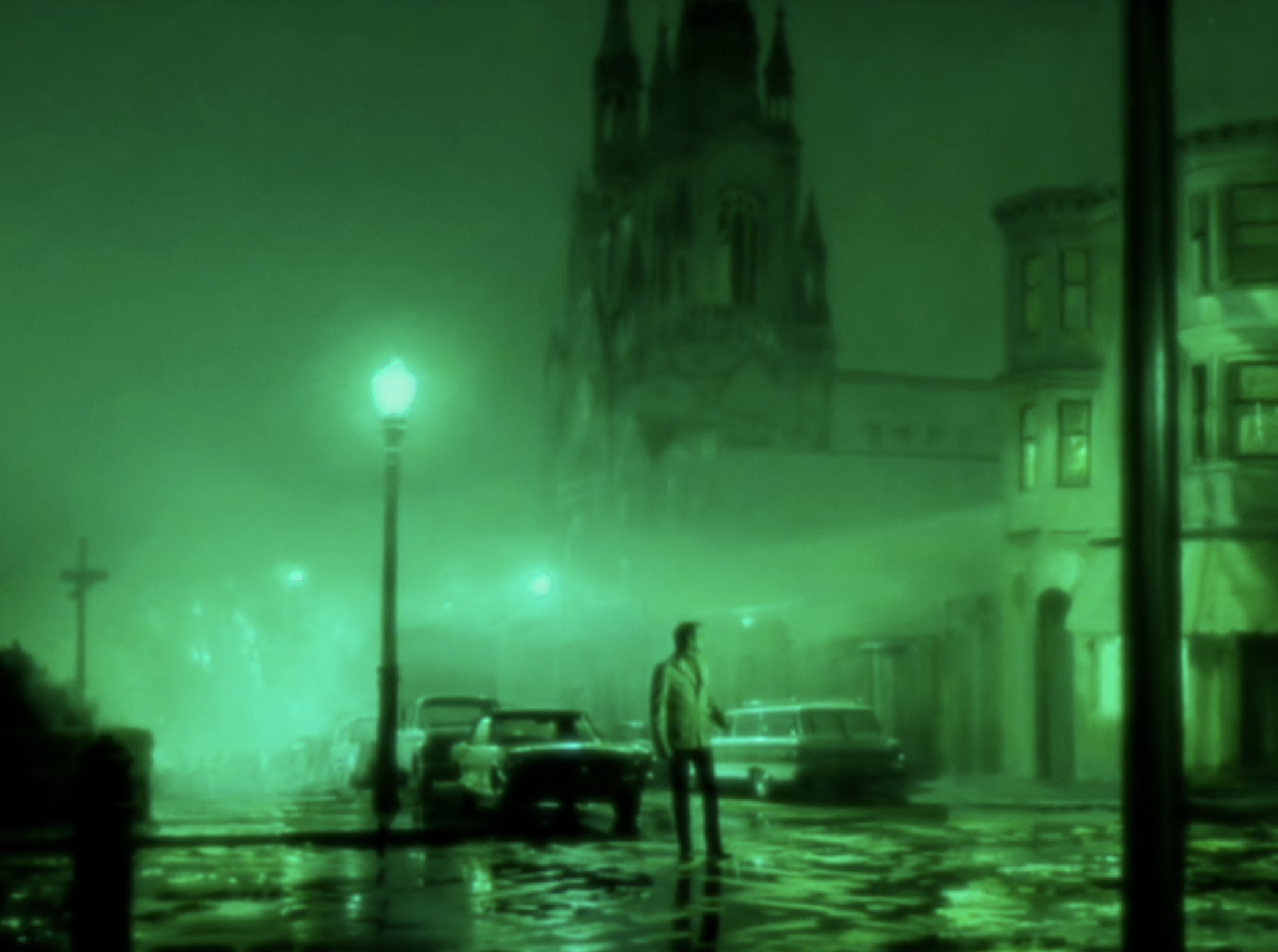 Shrewd and nimble editing by the Johnsons cuts carefully around and over choices that might otherwise have brought the wrath of copyright-holding corporations greedy for some kind of financial compensation. One of The Green Fog’s most consistently delightful techniques slices away nearly all the spoken dialogue from Ernie’s-tipped dining room conversation scenes, but leaves the breaths, lip-smacks, sighs, hesitations, pauses and reactions. The effect is deliciously erotic. Maddin has always been an equal opportunity satyr, a pansexual provocateur whose libidinous fevers are as often homosexual as they are heterosexual. The Green Fog exhibits compelling evidence that the gaze can be cast in the direction of men in their very own state of “to-be-looked-at-ness.”

Thankfully, the conclusion of The Green Fog cuts together the title cards from the source material used by the moviemakers, allowing the curious to compile a future viewing list of the less familiar content. The roll call serves as a reminder of Maddin’s considerable gifts as an appreciator of the tragic and the comic (The Green Fog inspires awe, but it’s also quite funny). After all, there are glimpses of Basic Instinct and An Eye for an Eye, Portrait in Black and Pacific Heights, McMillan & Wife and, liberally and indispensably, so many astonishing clips from The Streets of San Francisco. 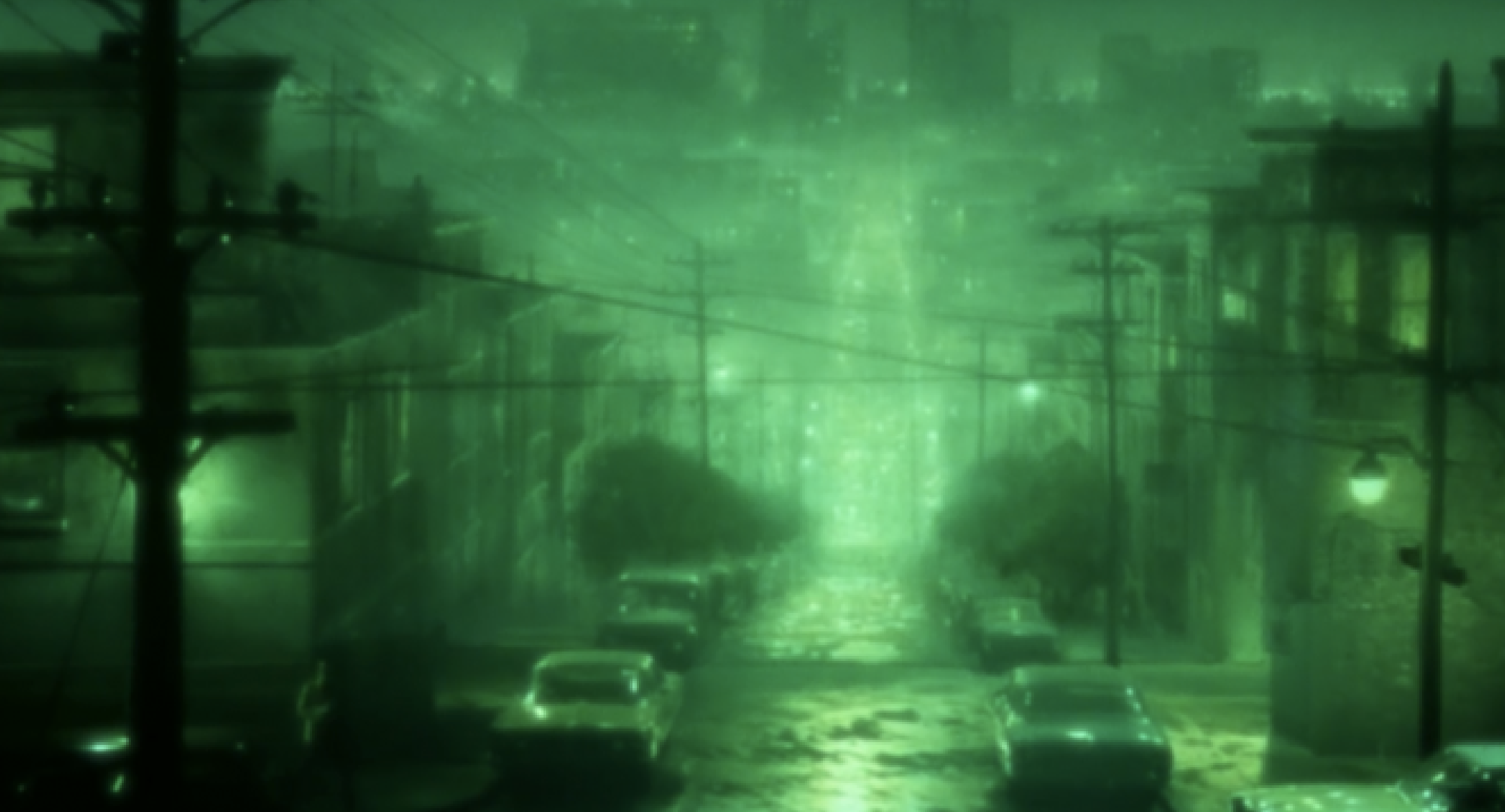 Several inspirations/precursors inform the categorization of The Green Fog. From Christian Marclay’s monumental experiment The Clock to great city-themed postcards such as Thom Andersen’s Los Angeles Plays Itself, The Green Fog is another shining example of how easy it can be to disappear in the silver screen labyrinth. These mirrors and rhymes of familiar sights, looks, places, actions and themes form the basis of how we experience narrative filmmaking.

In Bring Me the Head of Tim Horton, Maddin narrates, “The colors, sounds and desires of the living can never be perfectly replicated by video or film. Close, but only approximated. And anything that approximates imperfectly, no matter how well, is a distortion, as good as a lie, and every bit as dangerous.” The sentiment could just as easily apply to Vertigo and The Green Fog. Who better than Maddin, who has spent a career exploring the conundrum of cinema’s battle between reality and artifice, to remix as splendidly and confidently as Marclay and Andersen and Gyorgy Palfi? 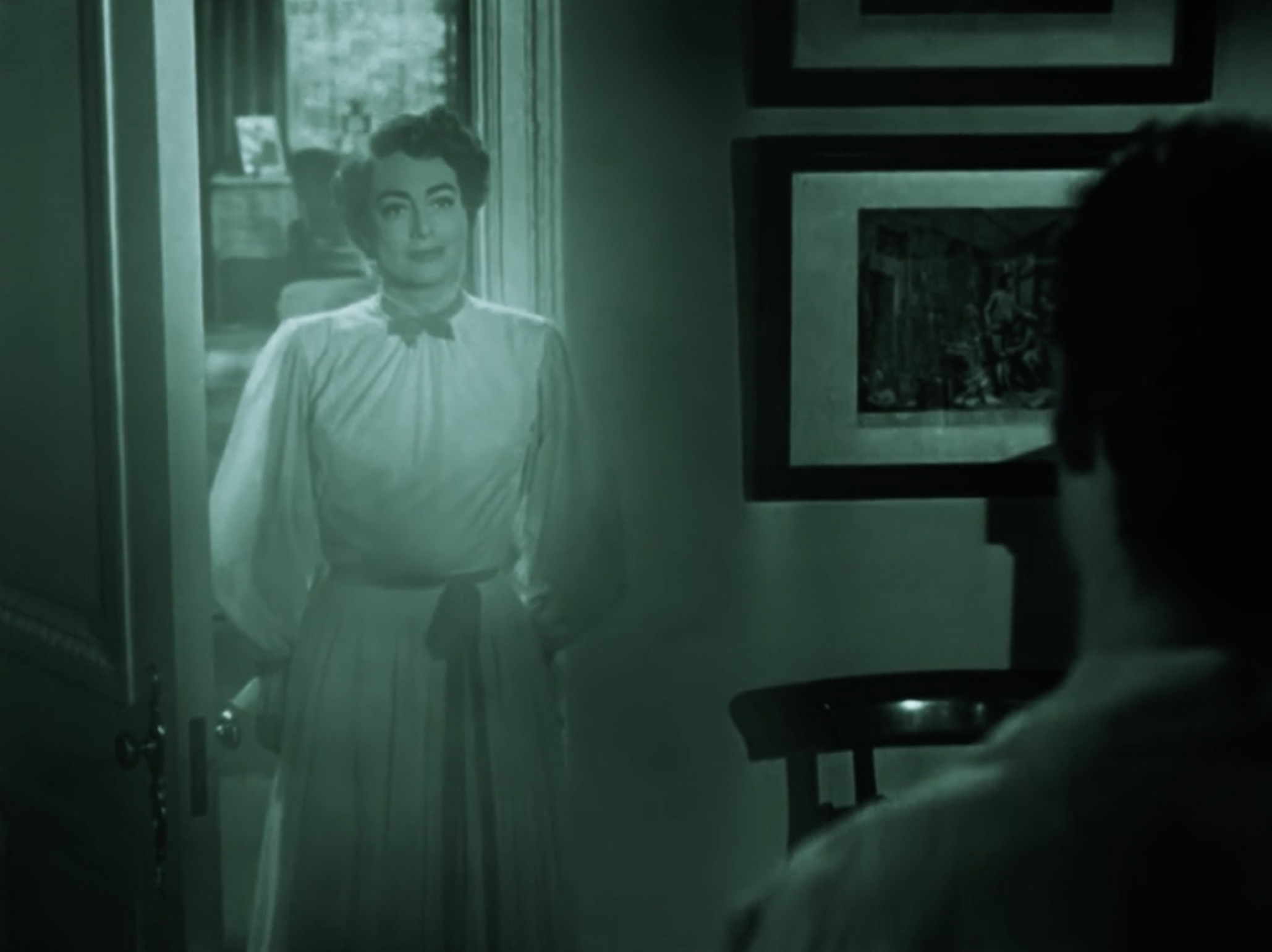 The Green Fog is a more pointed and precise variation of the cinephilia constructed by Palfi in the spectacular Final Cut: Ladies and Gentlemen. Where the 450-plus sources used in the Hungarian mashup build a much wider love story, Maddin’s Vertigo-based specificity motivates a reading of Hitchcock’s masterpiece that invites viewers to reconsider preconceptions about rooftop chases, voyeurism, surveillance, sexual obsession and the overlooked and ignored thoughts and feelings of Madeleine Elster and Judy Barton.