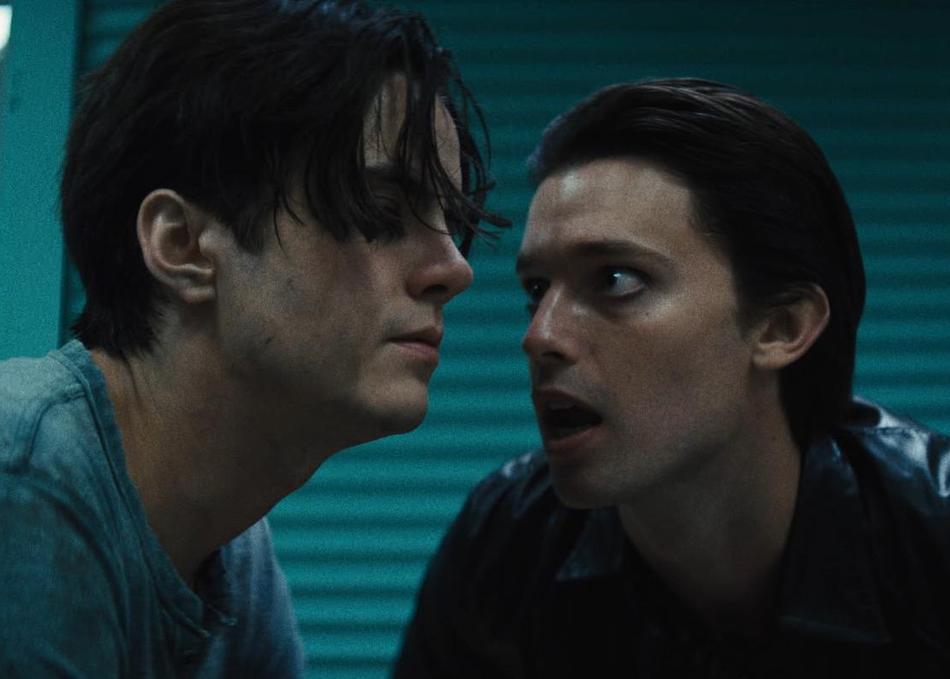 Lots of people have imaginary friends. They don’t usually have to be locked away in a dollhouse, but maybe that’s the point. While the title of Adam Egypt Mortimer’s new movie, Daniel Isn’t Real, makes a strong statement, the film itself makes the focal concept much more ambiguous. That’s per course for a psychological thriller, but sometimes there are rules that shouldn’t be broken.

When Daniel first appears, he’s a little boy (Nathan Chandler Reid), the same age as his creator, Luke (Griffin Robert Faulkner), who has a vivid imagination and also talks to his stuffed cat, Wilbur. However, Daniel talks back, and when he convinces Luke to do something that could’ve gone badly, his mother (Mary Stuart Masterson) poses the dollhouse idea.

Dissolve to Luke as a college student (now played by an emotive Miles Robbins), and he’s still having trouble making real friends. At home, his mother has been doing worse as well, and while her condition is never identified, it’s understood that she suffers from some form of mental illness (when Luke thinks something might be wrong with him, he picks up a book about schizophrenia). Unlike his mother, though, Luke isn’t opposed to asking for help, and a doctor (Chukwudi Iwuji) recommends that he try talking to Daniel again.

Mortimer never shows Luke re-open the dollhouse. He’s shown looking for the key and finding it in a drawer, but suddenly Luke’s in bed, waking up, and it’s never known if he actually opened it or not. This omission reflects the uncertainty around whether or not Daniel has a mental illness, and Mortimer — in collaboration with screenwriter Brian DeLeeuw (who also wrote the original novel) — plays it pretty close to the chest for most of the movie.

Where the film goes too far is in allowing Daniel to be able to physically touch Luke. Imaginary friends can’t touch people, but more than that, giving Daniel this ability creates a power advantage. When their conflict is restricted to the mind, Luke stands a chance. But having made the decision to not have Luke grow out of his imaginary friend, but grow up with him (when Daniel returns, he’s played by Patrick Schwarzenegger), Daniel’s ability to touch Luke feels like a cheat around the problem that the set-up creates. As a kid, Daniel could manipulate Luke, but that’s harder when he’s an adult. While it makes sense, given the medium, that Daniel would appear visually, instead of being restricted to a voice in Luke’s head, having him be able to manipulate Luke’s body takes away the need for him to work harder if he wants to control Luke.

There’s also the issue of Luke’s doctor. Having Luke seek out professional help is a big deal, yet while his mother is able to get professional treatment that helps, Luke’s doctor ends up being less traditional. With his Tibetan singing bowl, he’s a character one might expect to see in folk horror films but not so much in the modern city (which isn’t to say that singing bowls don’t help for meditation). When there are so many people that never seek help, Luke’s backfired efforts make everything seem hopeless.

With Daniel Isn’t Real, Mortimer stands by his choices and doesn’t wobble. The result is a film that’s harmonious and undiluted, if prickly and divisive.

Rachel Bellwoar (@ziggystarlog) drinks a lot of Coca Cola. Her tastes fall somewhere between David Bowie and David Lynch and, when she’s not writing for Vague Visages, you can find her reviews at Comicon, Flickering Myth, That’s Not Current and Diabolique Magazine.