‘The House Is Black’ and The Radical Spirit of Forugh Farrokhzad 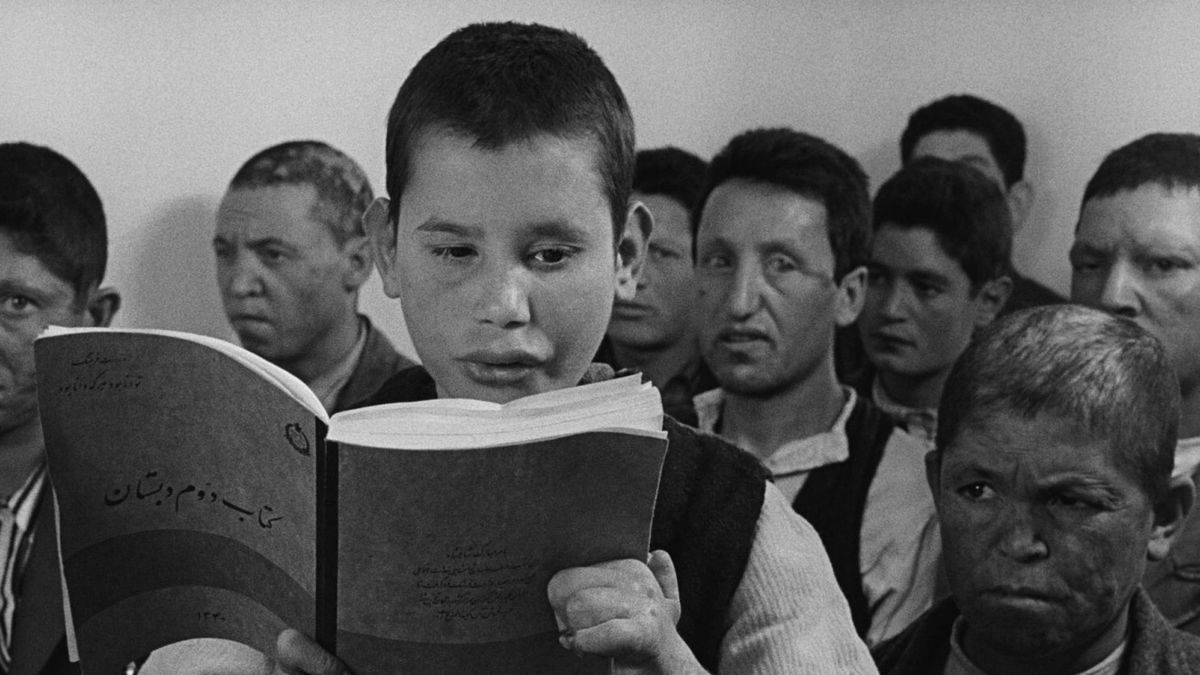 Legends form around artists who lived short lives, especially if they left us with only a small amount of work. Forugh Farrokhzad, the beloved Iranian poet, has only one film with which to judge her stature as a film artist, but she spent most of her career pouring out pages of extraordinary poetry before she was killed in a car crash at the age of 32. There are glaring similarities between Farrokhzad’s impassioned, sensitive poetry and the ethereal rage of The House Is Black (1963). But the true link between the artist’s two forms is her radical spirit, which not only fueled her politics and work but also the honesty and compassion in her approach to both.

Circulated online is a copy of The House Is Black that, through its poor quality, results in some of the subtitles sinking into the whites of a leper colony’s walls and the ragged clothing of its inhabitants. Thankfully, a recent restoration, which premiered at the 2019 Venice Film Festival, has solved this. Farrokhzad’s film is a vision of the Bababaghi Hospice in the city of Tabriz, where children and adults are treated for the ugly and extreme, though curable, effects of leprosy. As the writer, director, editor and co-narrator, Farrokhzad created a humanist documentary about people isolated by their suffering and infectiousness. As a filmmaker, Farrokhzad’s humanity and innovative artistic impulses were as fluent as any of her greatest poems. 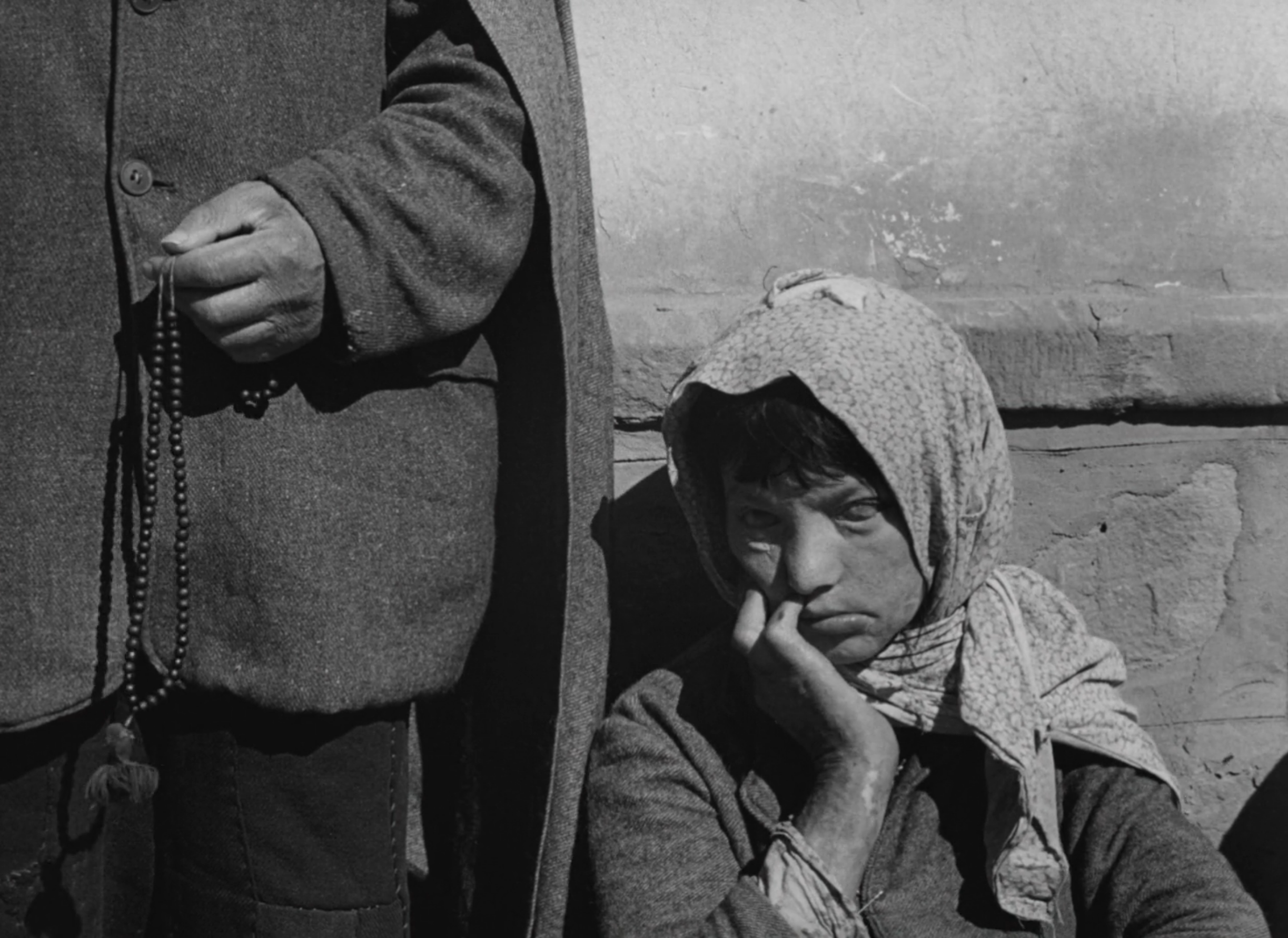 Farrokhzad was driven by a compulsive introspection, which she used to pen blatant condemnations of the sections of Iranian culture and politics that disgusted her. Conversely, The House Is Black is a film which insists on compassion towards a discarded people, a fault of the global community for which people, perhaps even decades later, should feel responsible. Farrokhzad said in a 1965 interview with Bernardo Bertolucci that “An intellectual is one who, besides trying for the external development of life, tries for the spiritual advancement, for the improvement of the moral issues.” Through her poetry, she undoubtedly achieved an intellectual freedom from the restrictions she was subjected to as an Iranian citizen and woman. But much like Farrokhzad’s poems, The House Is Black pushes the viewer and its subjects to strive for some kind of freedom, whether emotional, spiritual or political.

Farrokhzad’s career contains within itself the multiple complexities of how educated women were required to participate in mid-century Iran. The artist, not least because of her obvious talent, was able to publish her revolutionary poetry in notable Iranian journals, for which she was both lauded and criticized. Praise always came from those who wanted nothing but to admire the work of an unquestionably great writer. (It’s said that Darius Mehrjui translated some of her work for the Paris Review.) Farrokhzad became an icon in her country, but she was also considered a threat to the less talented, usually male bands of its intelligentsia. Farrokhzad had the freedom to work as she pleased, but not without the derision and condescension that was leveled at her, including a fixation on her romantic relationships, as she continued to write about the female experience of politics and sexual pleasure. Under Mohammad Reza Pahlavi, the last Shah of Iran, women were granted many liberties that were either erased or rolled back once the fundamentalist clergy, led by Ruhollah Khomeini, took charge in 1979, post-Revolution.

Farrokhzad joined Ebrahim Golestan’s film production company, Golestan Film Unit, as an assistant, having met him in 1958, eventually being encouraged to take on a role as editor. Their affair was another point of obsession for many, with some going as low as to say that Farrokhzad’s later and highly revered work was a product of Golestan’s influence rather than her own artist evolution. Critic Sadr-ed Din Elahi once said that Farrokhzad was a “motionless feminine pond with no wave or mobility,” and that Golestan “fell into that water like a luminous stone and replaced the deadly calm and quiet with lively stirring and motion.” It was with Golestan’s company that Farrokhzad was given the opportunity to make The House Is Black, after having edited Golestan’s A Fire (1961). Their relationship would end with Farrokhzad’s death in 1967.

“There is no shortage of ugliness in the world,” says Golestan over a black screen at the beginning of The House Is Black. “There would have been more ugliness if man had closed his eyes to it.” Once the image of a human face appears, where the patient’s eyes look out from their melted eyelids, Farrokhzad soon takes the role of guide, quoting lines from her own poetry, the Qur’an and the Old Testament. This is briefly interrupted by what sounds like a third narrator, where a traditional style of documentary is given limited time to run through the basic facts. “Leprosy can be anywhere or everywhere. Leprosy goes with poverty.” The ways in which the disease eats at the flesh accompany the narrator’s frank descriptions. As if not wanting to linger too long on one person’s deformity, images cut from one to the other impatiently in a brisk summary of the medical details, a context which is necessary yet secondary to Farrokhzad’s film. A woman’s hands being weighed down with sandbags and stone is the only image in this sequence which breaks free from its clinical bullet pointing. 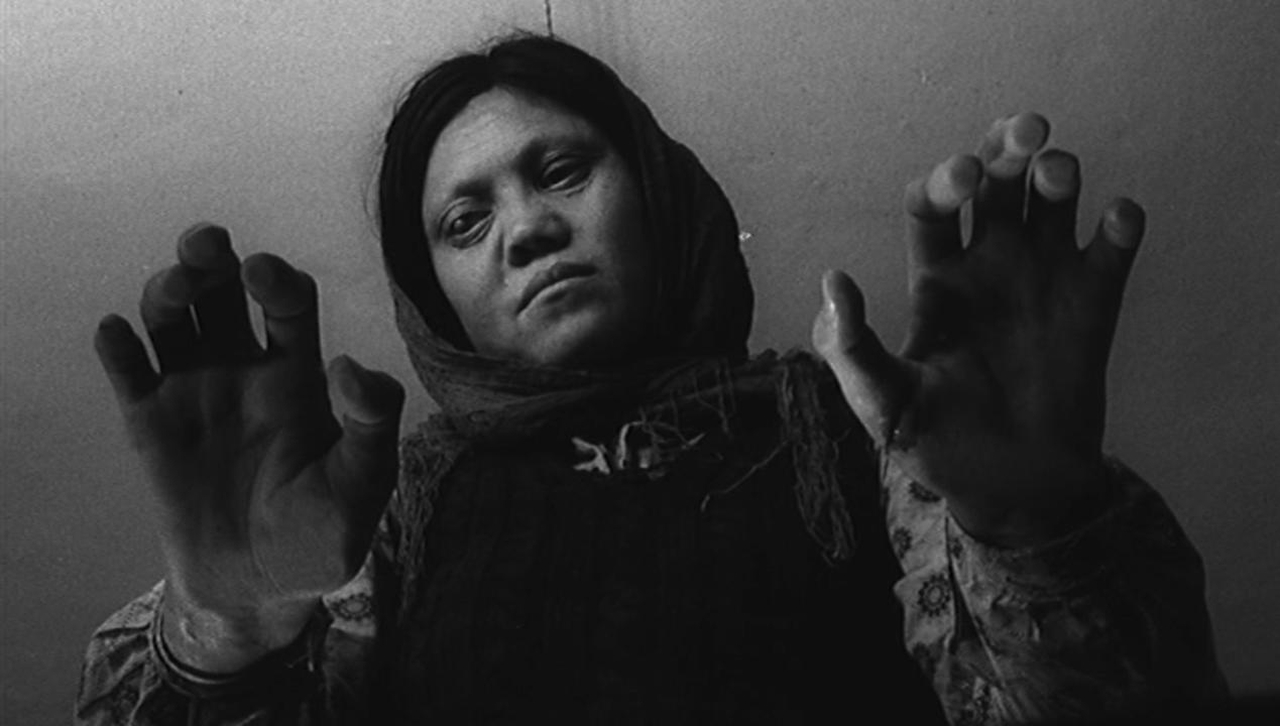 Leprosy, as it’s shown in The House Is Black, is a terrifying and brutal destruction of the human body. Farrokhzad’s heartache for what inflicts these people sounds in her voice as she narrates, and also in the rage that is exposed by her short, quick cuts, as if she is too angry to pause, throwing image after image at her viewers. Farrokhzad’s poetry equally places the body at the forefront of human experience. Her poems about sex and love are enamored by the bodies taking part in these two physical acts. Similarly, in Farrokhzad’s lonely sketches of isolation, looking down at the street from a window or expanding her consciousness to absorb nature and the universe, her melancholy is a physical affliction. I am always overwhelmed by the tenderness of Farrokhzad’s images and words.

There is a noticeable division within The House Is Black, separating the roughly 22-minute film into halves. The first is as I’ve described: whether the disease has completely transformed the person or they retain most of their natural appearance, the leprosy itself is emphasized, the people only its victims. However, while still grim in many ways, The House Is Black’s camera then loosens and the people are left to play their instruments, dance, fool around in a classroom, put on make-up and kick about a football. There are people hiding in the corners of the frame, concealing their faces, and people who stare into the camera without much expression but lethargy. But there is also a lot of joy, at least in the moments that Farrokhzad and her crew witnessed and recorded. After being forced to contend with the ugliness of the disease, soon the deformities fade and the real people underneath transcend their misery, instead just passing the time together.

In a strange contrast to this section of The House Is Black, Farrokhzad’s words are laughably bleak, like that friend, including the voice in your head, who in a moment of peace will remind you of your death, in case you forgot. “Leave me, leave me for my days are but a breath. Leave me before I set out for the land of no return, the land of infinite darkness.” Still, there is purpose in every subject, cut and verse of The House Is Black. Through Farrokhzad’s art, it’s clear that she believed love is one of the purest expressions of living. But her case for love is not naïve: she was as bitter and mocking as she was benevolent. The House Is Black is an act of love that is inherently radical because Farrokhzad’s aim was to depict the ugliness of the leper colony without distorting the miserable truth, and beauty, of the lives within it. 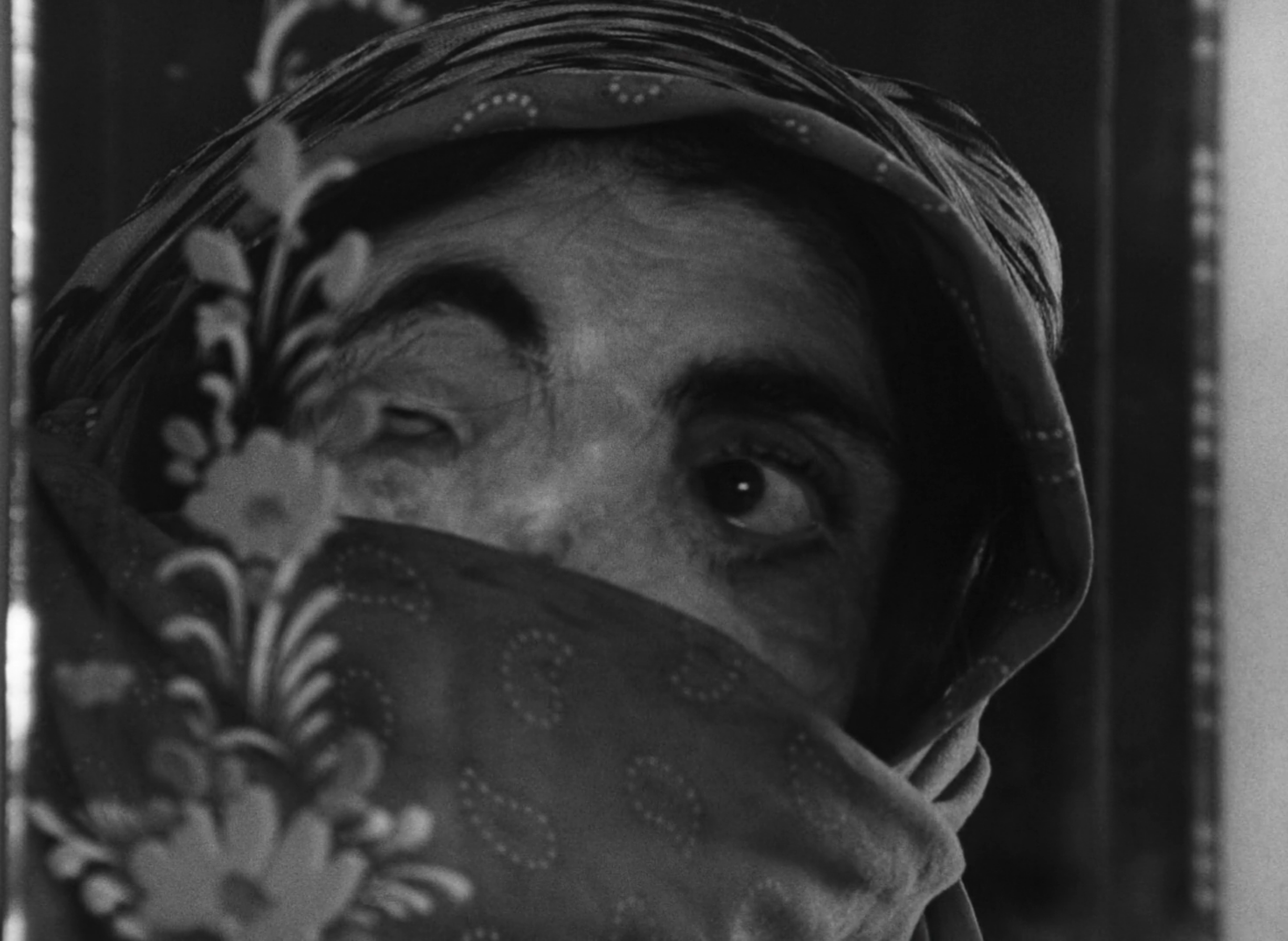 Farrokhzad was a prisoner of her own sensitivity; there are bounds of emotion and pleasure in her work, but not much happiness. Her son was taken away from her when she divorced the man she had married at 16. Sholeh Wolpé, whose English translations of Farrokhzad’s poetry are essential, said that the loss of her son was “a source of great sorrow and constant torment.” This is only one of the difficulties Farrokhzad faced in her short life. The House Is Black is another edition of the artist’s tender, radical work, where there is true empathy for her subjects’ physical and psychological cages. Farrokhzad ended up adopting one of the boys in the film, the son of two patients, bringing him back to Tehran. But there is no example equal to the film itself of her compassion for those people.

Mark Seneviratne (@sene_mark) is a data analyst and writer based in Manchester, UK. He has published a short story in Not One of Us and numerous essays on film for Vague Visages, Film Inquiry and The State of the Arts.