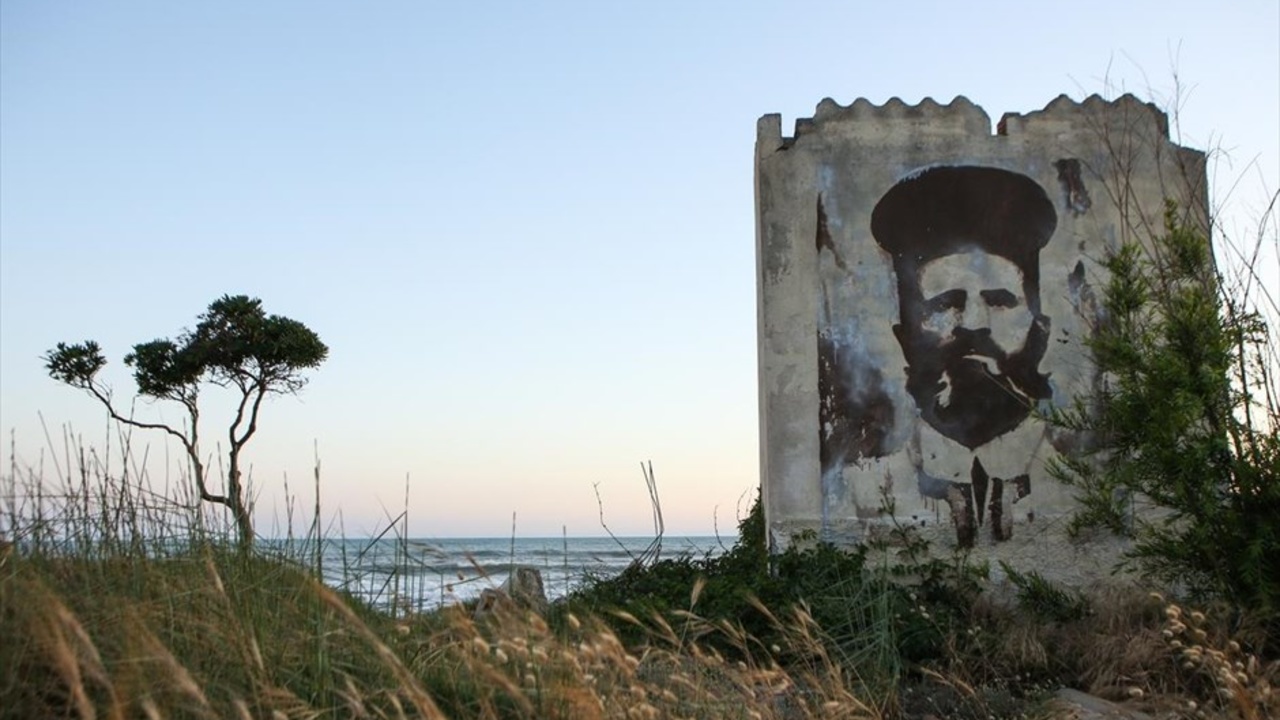 There are two sides to Outer Space Kids, the new documentary from Greek director George Gounezos. The film follows a graffiti crew, named the Outer Space Kids, who paint massive images in underground tunnels and abandoned warehouses. And as one may quickly suspect, it deals with themes of radical socialist art.

There’s the side that places the crew under a punk rock framework. The film pulls from the text itself, as the artists directly speak about growing up with punk music in Greece and how that propelled them into art and influenced their styles. Gounezos places images of the crew sweeping up the warehouses and preparing their space over narration about the music, transitioning to a punk rock song as they paint.

It’s effective filmmaking, but it is, on occasion, in conflict with ideas of the crew themselves. Of course, they speak about influences of punk music, but they also speak about the issues of art being pigeonholed and commodified, part of the reason why they venture out into abandoned spaces to leave their mark rather than paint in public areas. And tying punk rock to radical socialist art is an old trope. It helps to make clear what the Outer Space Kids are all about, but it quickly feels constricting of anything more than the basics of what the comparison can communicate.

Then, there’s the side that places the crew under a biblical, almost ancient framework. It’s not that ideas of god, nature and free-spiritedness aren’t well-trodden themes when it comes to this subject matter. But Gounezos does a brilliant job of injecting a transcendent ethereality into the visual world of these artists.

The cinematography is absolutely gorgeous. Gounezos often shoots the warehouses in wide, displaying the vast expanse of buildings out of place and out of time. His camera moves through space in a way that evokes the work of Terrence Malick and Emmanuel Lubezki, as if it’s a ghost slowly wandering through an ancient space. The found architecture of the spaces does a lot of the legwork — one of the buildings has rows of columns all in the shape of crosses — but Gounezos allows his camera to both frame the space hauntingly and to immersively move through it.

When shooting the artwork itself , he often shoots in closeup and face-on or from a low angle, framing the artists looking up at them — all of such adding a biblical quality to the pieces.

It’s a style that also engages with the history of radical socialist art. The crew speak more on influences, pointing to Loomit and Daim, two German graffiti artists from the latter half of the 20th century. In turn, Loomit and Daim drew influence from surrealists and expressionists of the early 20th century, art movements in reaction to industrialism, modernism and war. While that line of connection isn’t explicitly explained by them or the filmmaker, there’s still a clear sense of history in the images, not just in what they look like — distorted faces echoing the work of Pablo Picasso — but in how the sight of the act of painting on these large walls calls back to what the act of doing graffiti on the Berlin Wall meant.

Outer Space Kids ends on a bit of an open-ended note. The film itself doesn’t have a clear narrative structure, but that’s not at all a detriment. Outer Space Kids is more so an experience, a glimpse into a world of art that exists beyond socially constructed borders. And that will continue on. There are no endings to that kind of art.