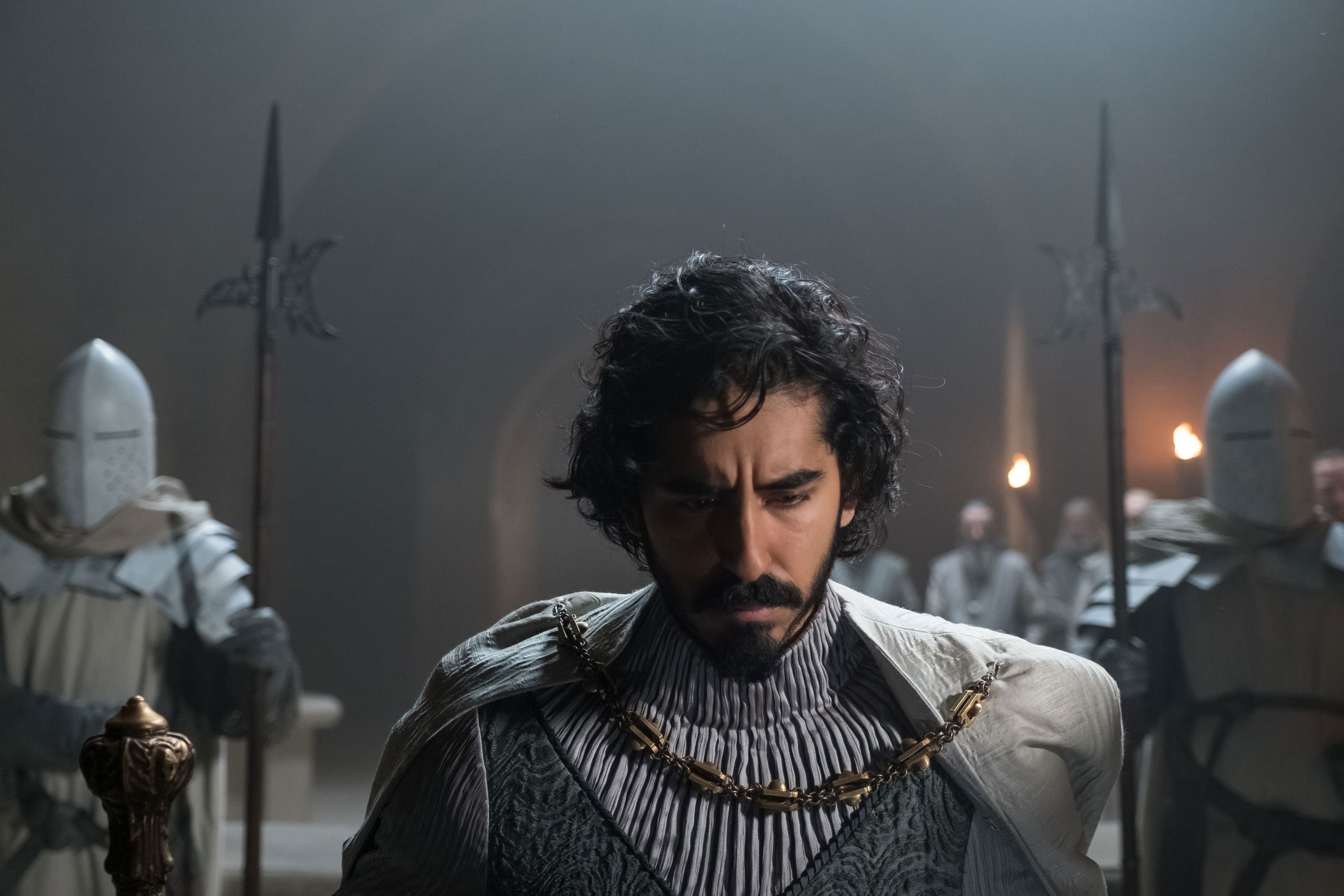 David Lowery’s The Green Knight features a pilgrimage like no other. Adapting the late 14th-century poem, “Sir Gawain and the Green Knight,” the filmmaker’s presentation is not simply another tale of swashbuckling exploits. Rather, it is an uncanny exercise in visual storytelling, raising a series of captivating questions. Lowery explores matters of courage, heroism, rebirth and survival with plenty of eye-popping symbolism. But, this quest for meaningful answers proves tricky, for as sir Gawain delves deeper into his madness, fog enshrouds the path to truth.

Set during the Christmas holidays, The Green Knight regales its viewers with the adventures of Sir Gawain (Dev Patel), the son of Mother (Sarita Choudhury as Morgan le Fay) and nephew to the King (Sean Harris as Arthur). Preoccupied with merriment and his sweetheart, Essel (Alicia Vikander), the protagonist is both eager and reluctant to earn his knighthood, and also initially more inclined to let his destiny find him. However, the hand of fate waits for no man, and it’s during the annual Christmas feast that a mysterious wooden figure makes his move. Basking in a greenish glow, this so called “Green Knight” wagers a “friendly” Christmas game: someone is to strike him once with his axe on the condition that he may return the blow within a year. Seizing the moment, Gawain accepts the knight’s challenge and severs his head with a single slice. So as not to falter, the Green Knight picks up his dismembered head and proclaims he will reciprocate one year hence. As the expiration of 12 months approaches, Gawain proves impassive to his responsibilities. Not accepting this, Arthur urges Gawain to live up to his code of honor and confront the Green Knight. In advance of this foreboding reunion, Gawain must begrudgingly endure several trials and tribulations. These challenges include a run-in with a mischievous scavenger (Barry Keoghan), assisting the spirit of Saint Winifred (Erin Kellyman) and warding off the temptation to idle leisurely with an unnamed Lord (Joel Edgerton) and lustful Lady (Alicia Vikander). Finally, Gawain must exorcise his own inner demons and decide what his destiny shall be. 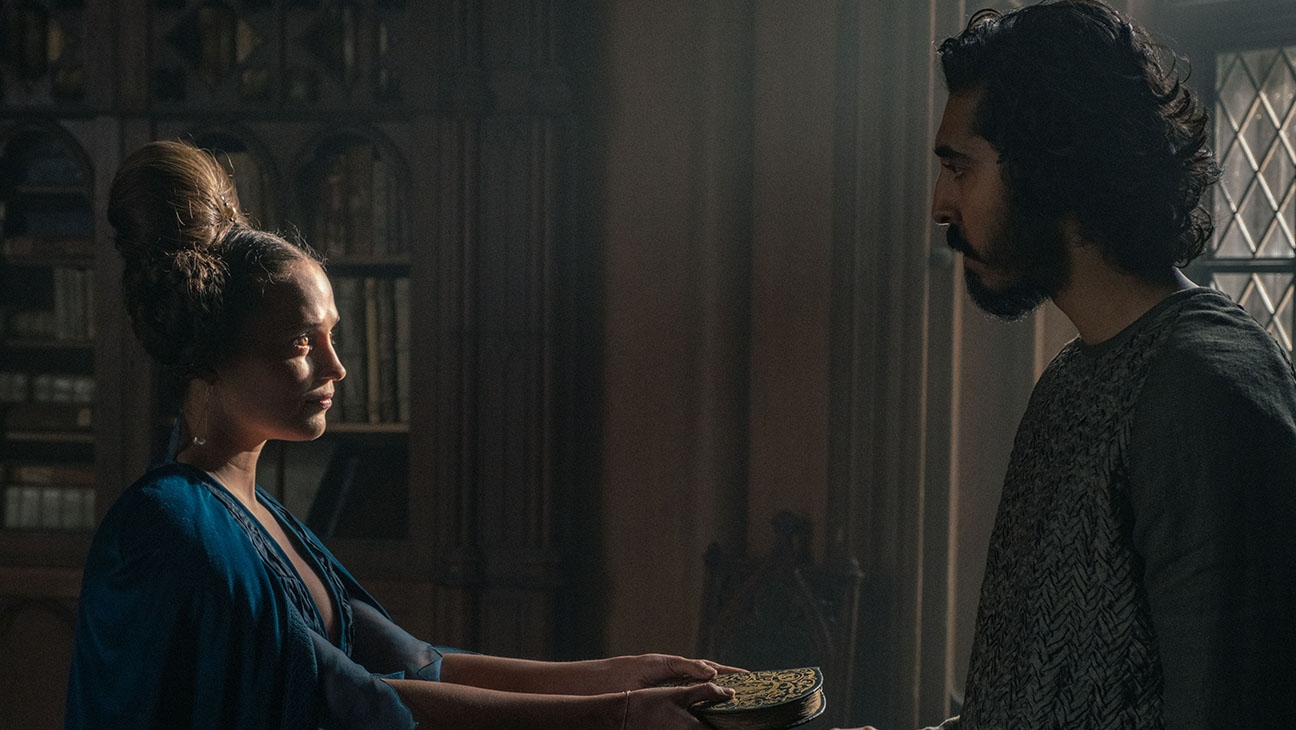 As Sir Gawain, Patel is well suited to play a foolhardy first time hero who is prone to recklessness, vulnerability and inexperience. It’s immediately clear that he is not a charming, debonair knight a la Franco Nero’s Sir Lancelot in Camelot (1967). While Vikander portrays Essel and Lady with vibrant confidence, recognition for the real standout performances goes to Erin Kellyman and Barry Keoghan. Kellyman, as the ghost of St. Winifred, injects eeriness and seriocomedy into her role. The actress’ dry humored nature engages Patel well, yielding entertaining dialogue. Their interactions are among the most enjoyable segments of Lowery’s film. Exhibiting a natural sense of desperation and a frustrated longing for control, Keoghan impressively executes the aggressive actions of Scavenger. As the title character, Ralph Ineson has a surprisingly limited, albeit effective presence. He leaves an unsettling air of mystery in his wake, the vibrations of which can be felt throughout this mythical landscape. Wearing a massive prosthetic costume, Ineson earns his paycheck with a booming voice. He vacillates between a gravelly and maniacal tone, sprinkling in some playfulness so that one can never be sure if the Green Knight’s intentions are that of a torturer or trickster. It’s doubtful that a CGI creation would have been as intimidating and eerily somber as Lowery’s tangible Green Knight.

Natural character progression is put by the wayside during The Green Knight, in favor of metaphors and philosophical exposition. With scarce expository dialogue, Lowery masterfully presents clear visual outlines of each character, through what Stanley Kubrick calls “economy of statement.” The clearest example is the unspoken recognition of the King as the legendary King Arthur. When the King grasps his sword and it brilliantly disperses the sun’s light, identification of King Arthur and Excalibur occurs. Lowery is a craftsman, more so than a dramatist, employing fresco paintings to foreshadow key events, and using foreboding puppet shows and medieval text as chapter markers.

Essential to visual storytelling and character manifestation is outstanding cinematography. Placing Gawain as the focal point of each scene, and blocking his shots with tight precision, cinematographer Andrew Droz Palermo succeeds in setting a visual tone that is unnerving and claustrophobic. In the film’s prologue, a staccato beat resounds and distorted angles prevail, further amplifying Gawain’s fractured state of mind. Madness reigns as Gawain’s later encounters pit him against monolithic giants, with the camera zooming and forever twisting like a corkscrew. The intensity continues to churn as the grinding of gears plays in the background. At no point is there any doubt this is not just a nobleman‘s journey, but rather a psychological introspection revealing complex questions dwelling in the dark regions of Gawain’s mind. 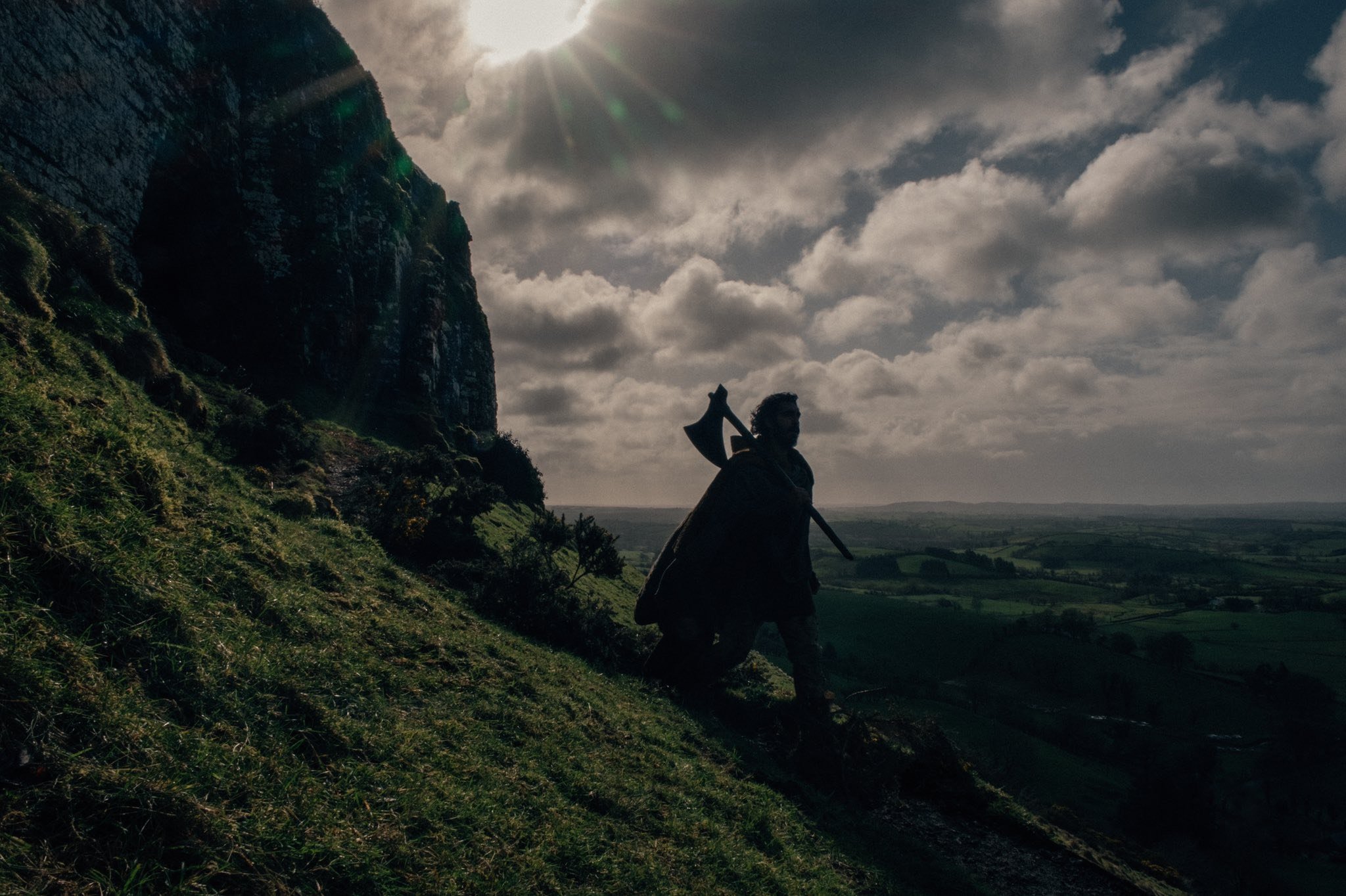 While The Green Knight falls under the fantasy genre, Lowery and Droz Palermo take their lighting cues from film noir. Harsh and natural lighting cuts to the heart of the story. Dim lighting is prevalent in interior venues and the woods. The costumes are largely mundane, with little blotches of color coming from scarves or robes. Lowery and Droz Palermo primarily reserve the use of color for surreal dramatic effect, with neo reds highlighting feelings of danger or passion, and a harsh green manifesting the Green Knight’s unplanned arrival at Camelot.

Droz Palermo exhibits the rare ability to compose shots of such exquisite detail that they could easily be mistaken for illustrative portraits. This talent is splendidly on display in the scenes of the grounds behind St. Winifred’s house. A yellowish haze intercepts full moon beams in the backyard yielding a mise-en-scène characteristic of the cover of old gothic horror novels. Such artistic flare is an essential part of The Green Knight’s richness. 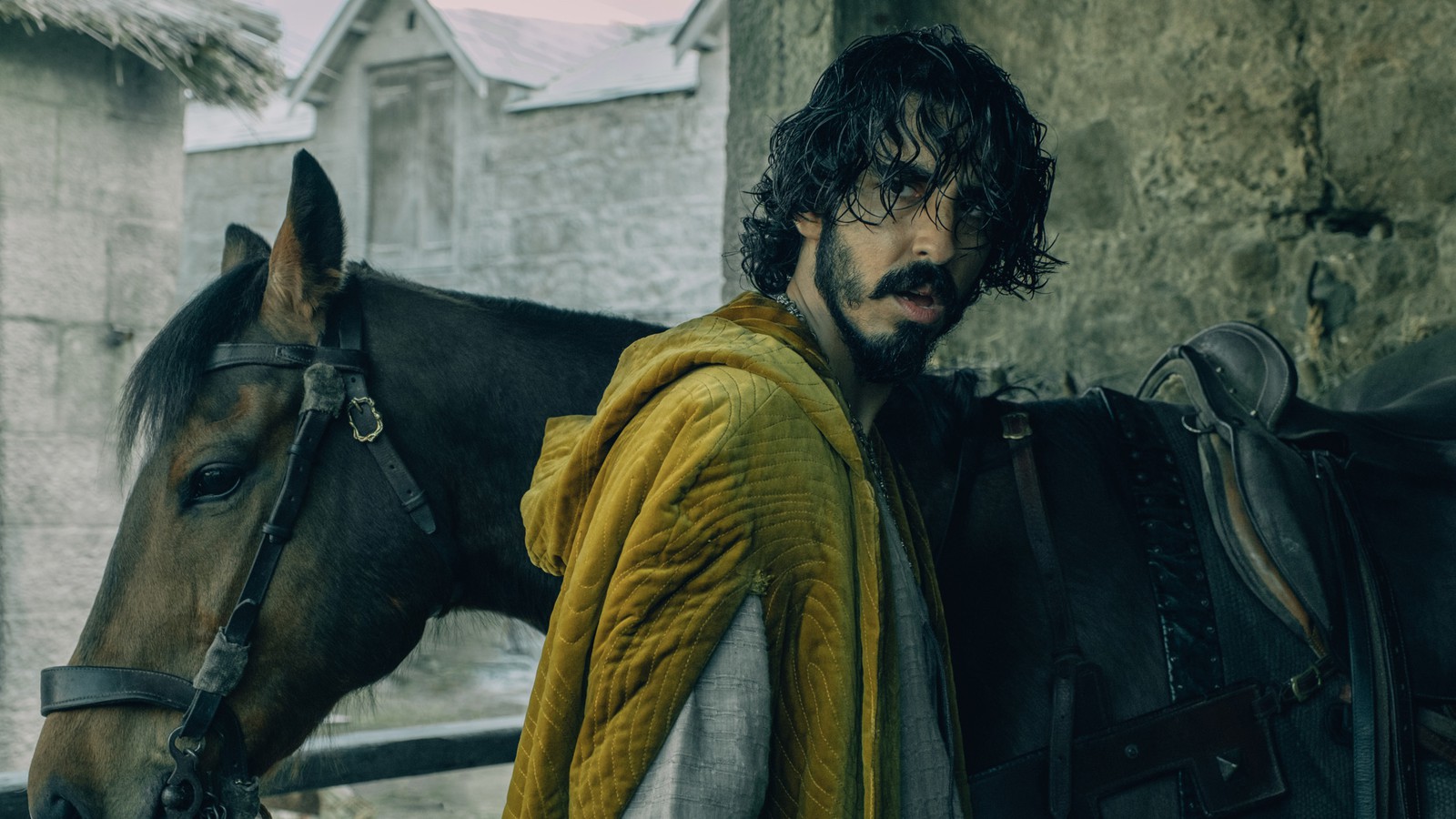 Overall, The Green Knight’s impactful imagery and intensity outweigh its sometimes overly cryptic metaphors, allowing for quality entertainment. Lowery embeds key themes concerning fertility, nature and rebirth to the backdrop and foreground of many scenes. This approach brings contemporary relevance to the 5th century legend. One may question, however, if the big screen is the proper venue for Lowery’s creation. This pensive production may have been more suitable for a streaming series rather than a feature film. However, many of the gorgeous nature scenes benefit from and deserve the big screen. Viewing an intelligent, thought-provoking work of art in the cinema is a welcome change. The ending of The Green Knight may leave some viewers with an unquenched appetite for closure. Perhaps that’s fitting for 2021.