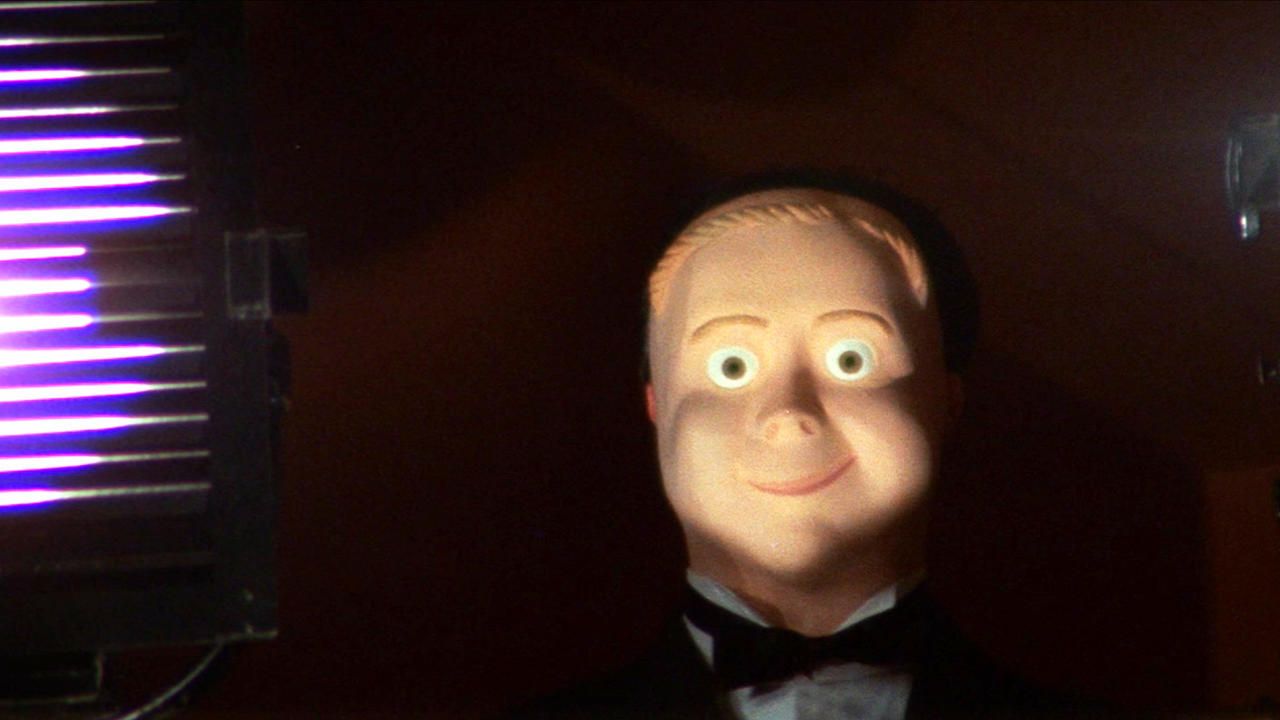 In the climactic moments of Four Flies on Grey Velvet (1971), Dario Argento’s third outing as director, the protagonist, rock and roll drummer Roberto (Michael Brandon), finally comes face to face with the killer who has been anonymously terrorizing him for much of the film’s running time. He looks down at the murderer and says, “Sure didn’t have to look very far, did I?” Four Flies on Grey Velvet arrives at this moment of clarity — for the character, the audience, the genre and the filmmaker himself — through Argento’s codification of giallo themes and stylistic approaches in this, his third attempt at the kind of crime thriller that would, like spaghetti westerns before them, become synonymous with Italian cinema for the next few decades.

Though Argento did not invent the Italian giallo film — that honor is largely due to Mario Bava, who was a great influence over Argento — he is the genre’s most identifiable practitioner. His first film, The Bird with the Crystal Plumage (1970), stars Tony Musante as an American writer living in Rome who witnesses an attempted murder through the floor-to-ceiling front window of an art gallery while he stands helplessly trapped in its locked vestibule. The Hitchcockian nod to Rear Window (1954) — the male hero rendered impotent, the woman in danger, the importance of the act of seeing — all associate these Italian crime thrillers with their generic forebears, both in Italian and American pulp literature and the psychologically-infused cinema of Hitchcock and film noir.

As Argento’s first directorial foray into the giallo film, The Bird with the Crystal Plumage is remarkably self-assured. The attempted murder in the film’s opening sequence is strikingly visual, with the all-white art gallery serving as a contrastive backdrop for the black-clad would be-murderer and the shock of red blood drawn by the victim’s knife wound. Argento’s second film, The Cat o’ Nine Tails (1971) is also a giallo, but not in the same mold as either its predecessor or successor, Four Flies on Grey Velvet.

The titles of Argento’s giallo films, which set something of a precedent for other filmmakers to follow, often refer to a small detail of evidence or a clue that eventually leads the protagonist to the identity of the anonymous, black-gloved murderer. Imagine if Rear Window was called The Woman’s Forgotten Wedding Ring. In The Bird with the Crystal Plumage, the titular bird is a rare Russian fowl with a distinct, shrill call, heard in the background of a recorded phone message left by the killer. In Four Flies on Grey Velvet, the flies in question are an image pulled from the retinas of a murder victim, later revealed on the killer’s necklace.

While it would be easy to dismiss these clues as silly, cheap plot contrivances that undermine narrative credibility, Argento’s giallo films use their focus on these small details to express the core of what giallo movies are about more broadly. These movies often stand on shaky narrative ground, and making sense of some of them can be an exercise in futility. However, Argento and his fellow giallo-mates excel at finding alienating horror in the everyday through their elevation of small, seemingly insignificant aspects of ordinary life. They seek to make the familiar strange and invest the benign with menace.

At the risk of getting too bogged down in story details, the plot of Four Flies on Grey Velvet is such: Roberto, a drummer in an up-and-coming rock and roll band, is walking home from the studio one night when he gets into a confrontation with an old man unknown to him. The fight between them escalates, and Roberto appears to kill the man accidentally, and is photographed by a mysterious, masked figure. The photos show up at Roberto’s house during a party, much to the consternation of his wife, Nina (Mimsy Farmer). Roberto’s guilt nags at him, all the while he tries to avoid the discovery of his crime. A second narrative thread opens up in Four Flies on Grey Velvet when Argento’s camera follows the mysterious figure (whose identity remains a secret) to the house of the old man, who is not really dead. A third opens when Roberto hires a private detective, Arrosio (Jean-Pierre Marielle) to find out who may be blackmailing him. These disparate threads culminate in a scene at Roberto’s house, when the killer’s identity is discovered through the truth about the four flies. 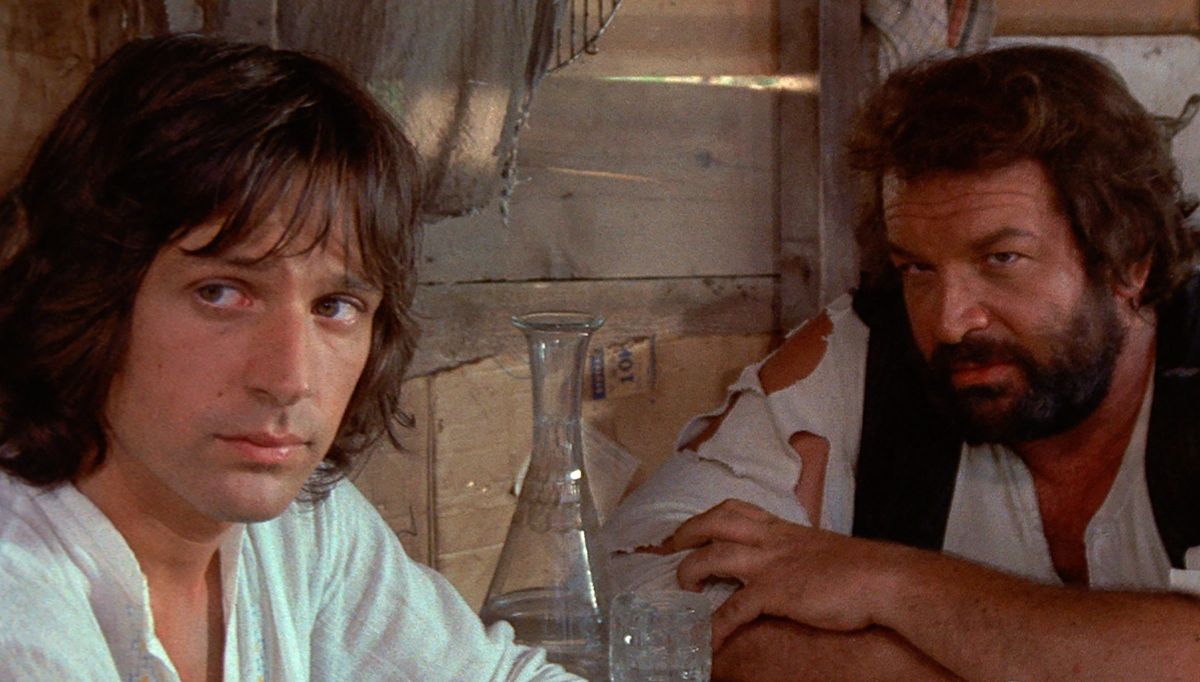 All of this is relatively secondary, of course. The plot details of this, or any giallo, are incidental compared to the films’ concern with their themes and technical experimentation. Four Flies on Grey Velvet’s plot is one thing, but what it is about is another. As Roberto’s paranoia builds, and he begins to suspect that the killer may be someone close to him, the film invites the viewer into his increasingly unstable mind. This progression is accompanied by Roberto’s recurring nightmare, which Argento shows in fragments. In it, a man is executed, first through a short, staccato dagger punch to the base of his skull, followed by the swing of a sword that decapitates him. The camera is always behind the executioner and his victim, in a medium shot. Neither of their identities are revealed. The frame is bright, washed-out in its sun-drenched setting somewhere, presumably in Saudi Arabia — Roberto overhears a party guest early in Four Flies on Grey Velvet talking about executions there. The nightmare gets at Roberto’s deep fear — that as his paranoia grows deeper, he will lose his head, both figuratively and literally.

This fear of loss of mental control permeates the film. Though Roberto is the film’s protagonist, one of the great characteristics of Four Flies on Grey Velvet and numerous other giallo films is their willingness to destabilize traditional notions of subjectivity. This tendency manifests itself most readily in giallo films through their liberal use of subjective camera, where the killer’s hidden identity remains a mystery because all the camera shows is black-gloved hands, wielding a glinting, silver blade. In Four Flies on Grey Velvet, Argento has fun transgressing established boundaries of subjective gaze. In a scene midway through the film, the killer turns on the old man, murdering him to eliminate confederates in the conspiracy against Roberto. Argento’s subjective camera is in the killer’s point of view as a black-gloved hand picks up a blunt object from the table, and brings it down on the back of the old man’s skull. Argento then jumps into the subjectivity of the old man as he looks up from the floor, seeing the blunt instrument crash down on the front of his head. It moves back into the killer’s eyes once more as the old man defiantly spits blood onto the camera lens, and then back into the old man’s point of view as the killer (who remains out of his and the camera’s field of vision) finishes the job, and blood pours down from the top of the frame, completely covering the camera’s eye.

In a scene like this, the camera identifies both with killer and victim, making the audience complicit in the fracturing subjectivity of the characters within the narrative. In this moment, the result is an immersive experience in the brutality of violence, as the camera visualizes both aggression and submission. This is pure Hitchcock — think back to Spellbound (1945), which, in the space of a single shot, climaxes with Dr. Murchison’s (Leo G. Carroll) gun first pointed at Dr. Constance Peterson (Ingrid Bergman) as he threatens to shoot her, and ends with the villain turning the gun towards himself, the camera and the audience before pulling the trigger. In giallo films, though the body is at risk of mutilation and penetration, the mind is also vulnerable to destruction. Roberto, whose entire life as a rock and roll drummer is about keeping time and establishing a rhythm that is easy to follow and predict, the destabilization of routine and order inflicted upon him by the mysterious blackmailer and killer is almost more consequential than any physical harm he could suffer. If he were killed, Roberto would simply lose his life. If he loses his mind, he loses everything. 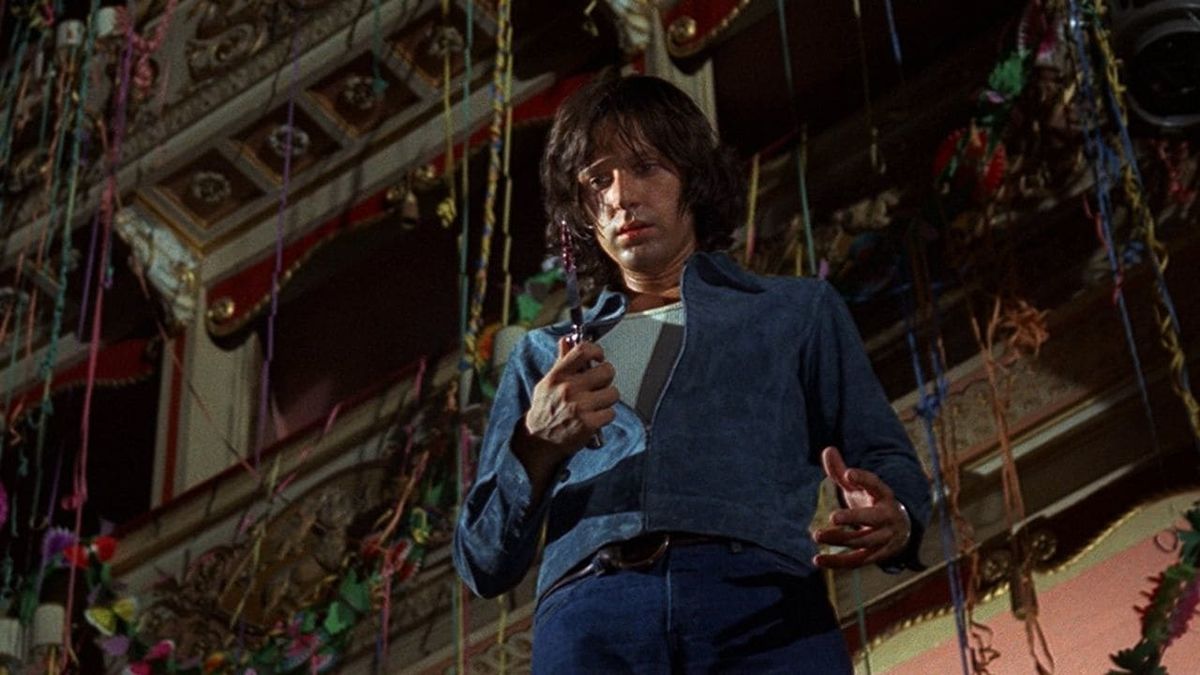 In giallo films, the world surrounding the characters is a reflection of their fracturing subjectivities. Dalia (Francine Racette), Nina’s cousin, who becomes Roberto’s lover after Nina leaves him partway through the film, is stalked through her apartment by the killer — it is her lifeless eyes that see the four flies on grey velvet that ultimately yield the identity of the murderer. Her apartment becomes a dark, nightmarish space where the threat of physical violence lurks around every corner. She hurries up the stairs into the dimly lit upper level of her flat, and the shadows in the stairwell look like sharpened teeth pointing down at her. She hides in an armoire, propping the door open just enough to see into the room; the shaft of light that sneaks in recalls the shimmering knife blade of the black-gloved giallo killer, both in this and in subsequent films in the genre.

Above all, Argento is a visual and aural stylist, and the style that would carry him into his later films deepens here, with flourishes of freewheeling experimentation. As Dalia cautiously goes up the stairs into the apartment, he cuts suddenly to a close-up of Dalia’s ringing phone, with Roberto on the other line. He cuts back to Dalia, but the phone isn’t heard. He smash cuts back to the close-up of the phone twice more, each time jarringly capturing the contrast between the silence of Dalia’s room and the deafening noise of the phone in its own shot. In the space between these shots, Argento’s cutting pattern calls attention to the clash of spaces, each respectively representative of danger and security. After the killer discovers Dalia hiding in the armoire, the gloved hand slashes at her forehead, and she tumbles down the flat’s steps. Instead of a traditional shot at the top or bottom of the staircase, Argento’s camera looks down at Dalia’s flat-back face and shoulders, riding all the way down the stairs, her head bouncing off each one. Visualize The Dude floating down the lane in his Busby Berkeley dream sequence in The Big Lebowski (1998), but instead, it’s Dalia, surfing backwards down a dark stairwell.

Argento would follow up Four Flies on Grey Velvet with more, and better, giallo films. However, the value in revisiting this one is not only its rarity — many of his other films are more well-known and much easier to find — but its illustration of Argento solidifying his own giallo vision. The 1971 movie is a strong example of Argento’s developing visual style, but also his growing skill in using those stylistic techniques to articulate themes (if not an entirely cogent plot or consistent, well-drawn characters). Like his bcset, besieged, beleaguered protagonist Roberto, Argento is trying to solve his own mystery; Four Flies on Grey Velvet is an important clue.

Brian Brems (@BrianBrems) is an Assistant Professor of English and Film at the College of DuPage, a large two-year institution located in the western Chicago suburbs. He has a Master’s Degree from Northern Illinois University in English with a Film & Literature concentration. He has a wife, Genna, and two dogs, Bowie and Iggy.