Revisiting the Legacy and Style of the Gravity-Defying Nicholas Brothers 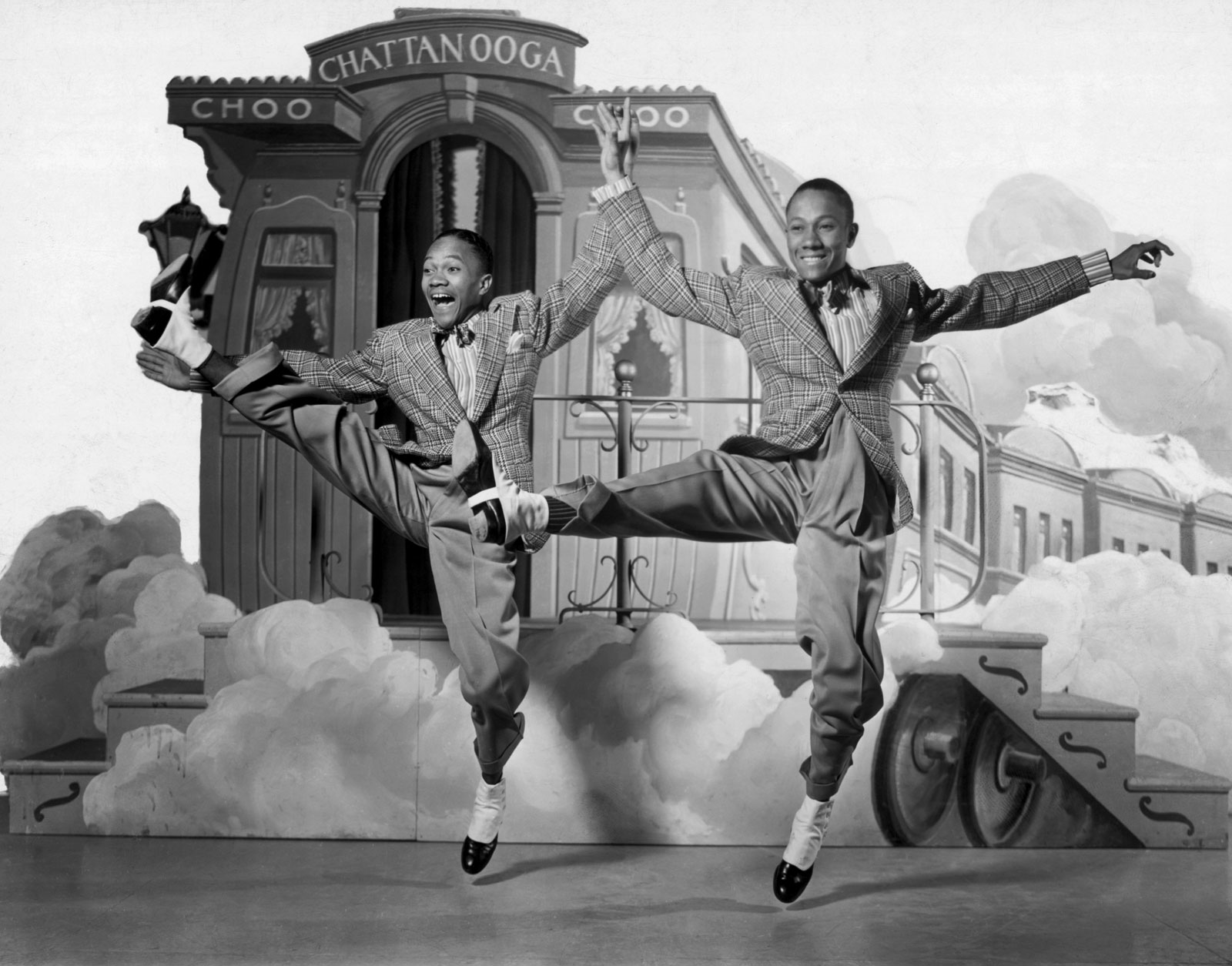 There’s a moment in the timely James Baldwin documentary I Am Not Your Negro that features a clip from the 1957 Doris Day musical The Pajama Game. In it, a group of colorfully-clad white people joyously sing and dance amid rolling green hills. The scene immediately conjures up the words of film scholar Richard Dyer, who argued that the American film musicals of the 1940s and 1950s “typically show us space occupied entirely by white people, dancing wherever they want, singing as loudly or as intimately as they need.” He’s mainly speaking about MGM musicals, exemplified by Singin’ in the Rain (1952), An American in Paris (1951) or The Band Wagon (1953), in which stars like Gene Kelly, Fred Astaire and Cyd Charisse frequently burst into song and dance in a public space. In the way that the nostalgic (and polarizing) La La Land took its cue from such films is a stark reminder that what we consider to be “classical” Hollywood musicals often articulate an exclusively white utopian sensibility.

In the context of Baldwin’s incisive commentary on the systemic racism that pervades America, especially in regards to how domestic cinema has perpetuated narratives of inequality, The Pajama Game’s blatant whiteness made me think of Fayard and Harold Nicholas, who are better known as the “Nicholas Brothers.” As African-American performers during the Hollywood studio system, the real-life siblings were often relegated onscreen to the space of the “specialty act.” In many of their films for 20th Century Fox, they appeared as nightclub performers for a diegetic audience, and did not return beyond those brief moments of spectacle — which could then be cut for Southern audiences. They didn’t get to star in musicals or dance in parks for they, along with so many other non-white performers in 20th century Hollywood, were reduced to stereotypes, cinematically contained and, in the case of many MGM musicals, absent. 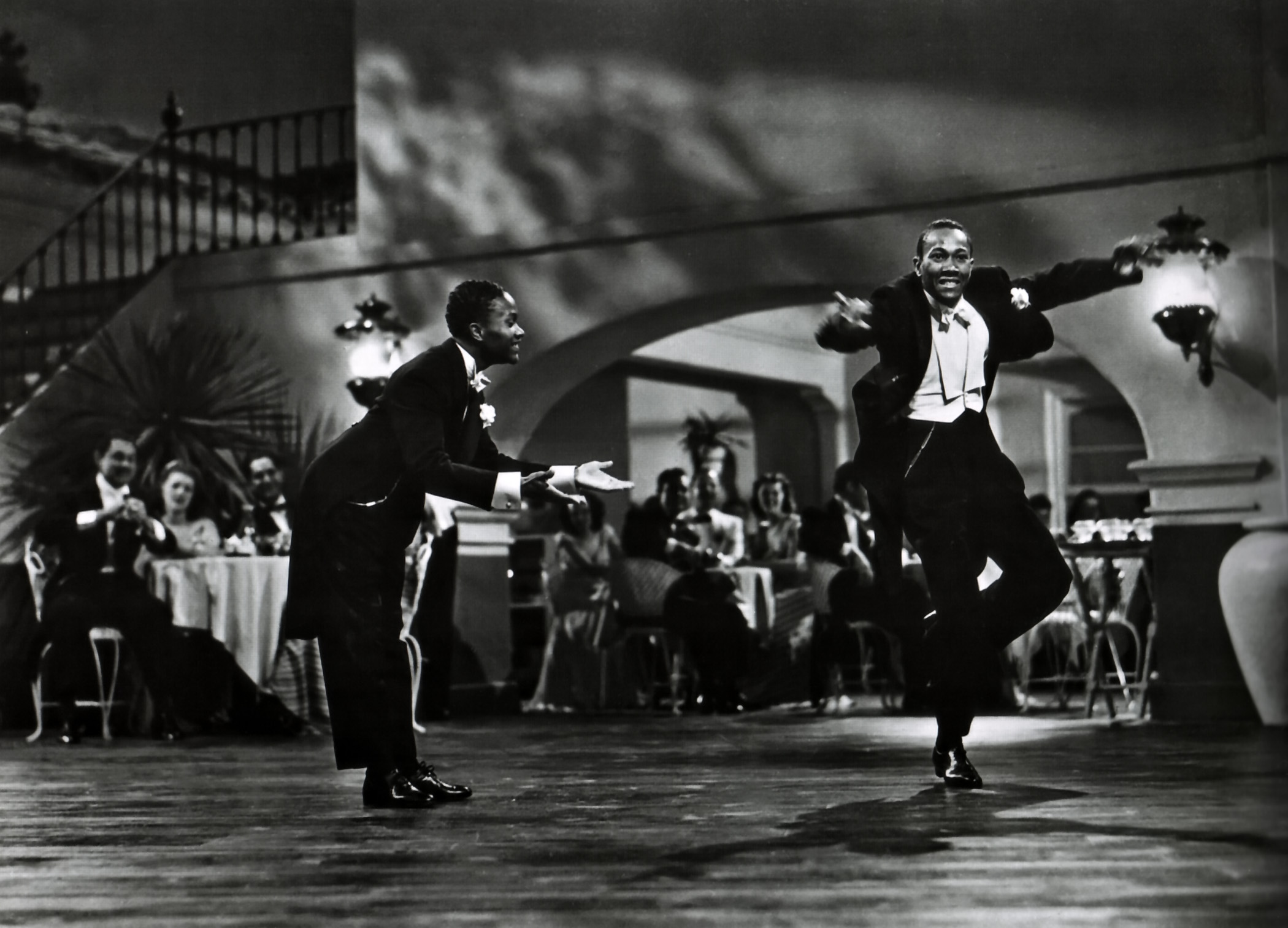 At the same time, however, Fayard (1914-2006) and Harold (1921-2000) were extremely popular. Their tour-de-force routines dazzled audiences both domestically and internationally. Born to musician parents, these self-taught dancers performed on the black vaudeville circuit in 1930s Harlem (and were the youngest dancers ever to appear onstage at the Cotton Club), on Broadway (working with George Balanchine) and around Europe. In the 1940s, they had a contract with Fox and later performed on television. There are reports of times when their dances were met with such enthusiasm that the projectionist had to rewind the film. And yet, while they may have been well-known entertainers with recognizable talent, they were still black in segregated America and could not, for example, enter the Fox commissary.

Given their brief cameos and marginalized position on screen and off, it is not surprising that the Nicholas Brothers exist today as an open secret; a niche pleasure acknowledged by those who loved their dancing, but not by the so-called “canon,” which continually celebrates the more visible work of Kelly and Astaire. While it may not be a surprise, it is a tragedy. Fayard and Harold’s staggering routines and dynamic choreography — a fusion of black vernacular theatrical traditions, jazz, tap, ballet and acrobatics — are a rich and important part of American film musical history and deserve our renewed attention. 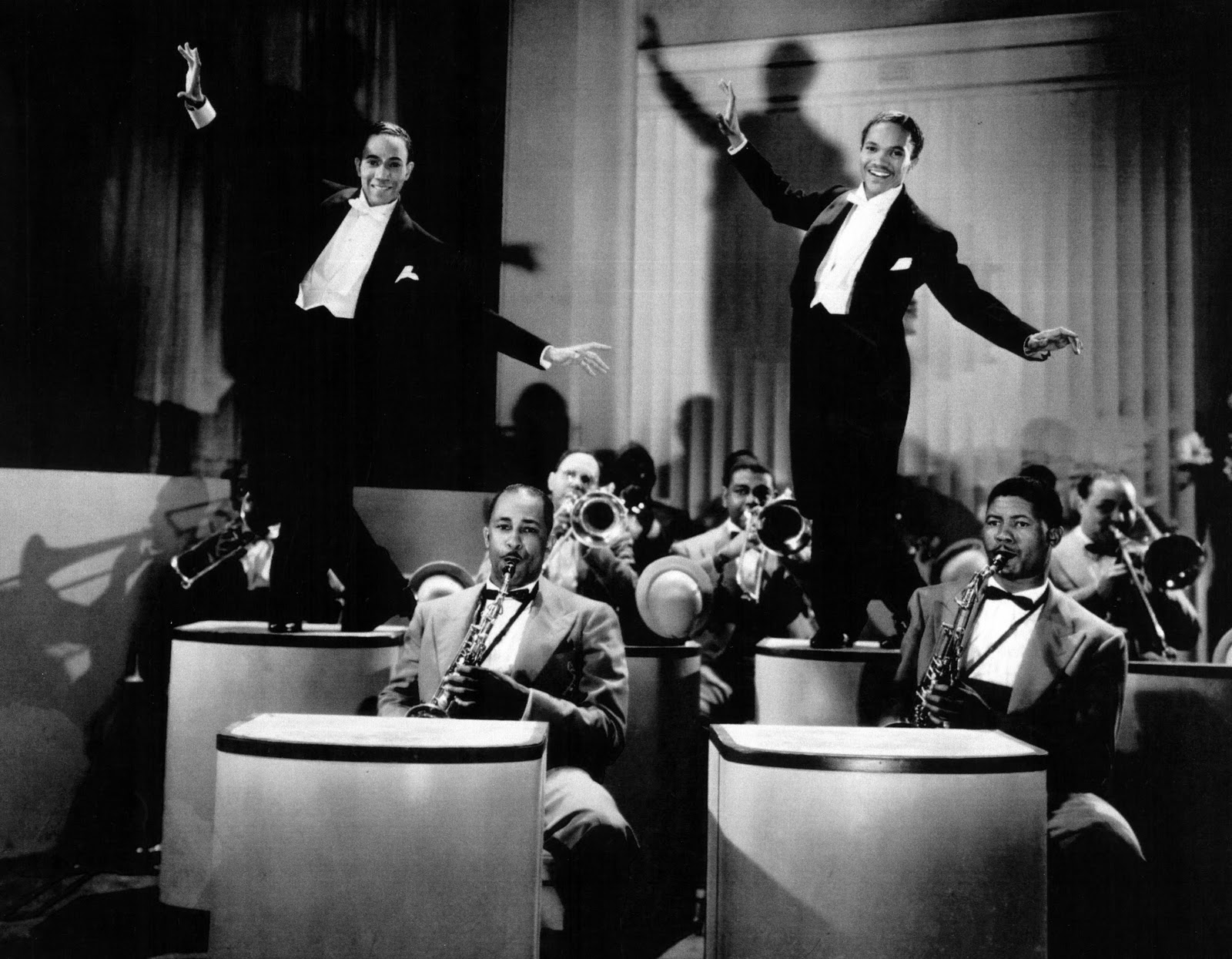 You could classify the Nicholas Brothers’ signature style as a co-existence of many elements; there’s both a looseness and a precision, as well as a mix of the comic and the earnest. They are simultaneously graceful and elegant and forcefully athletic (watch for the ever-loosening hair gel in almost every number). Fayard and Harold appeared in a handful of films for Fox, including Down Argentine Way (1940), Sun Valley Serenade (1941) and the all-black cast movie Stormy Weather (1943). In the dances for these films, they abandon any sense of rigid corporeal boundaries and instead present fluid, flexible and hyperkinetic bodies that almost defy gravity and form. The duo’s choreography — which often directly engages with the limits of their designated performance space — defiantly meets the containment imposed upon them as African-American bodies, both cinematically and socially, with an elastic expansiveness.

Many of the team’s film routines are available on YouTube and are worth seeking out. You can find, for example, their debut in the 1932 Vitaphone short Pie, Pie, Blackbird, as well as their 1948 cameo in The Pirate, where they danced alongside Kelly. The brothers’ most famous routine, “Jumpin’ Jive” from Stormy Weather, is usually the top hit. Astaire reportedly claimed that it was the best dance he had ever seen on film and Gregory Hines called it “Shakespeare.” It is difficult to disagree with them. The number opens with Cab Calloway and his orchestra, but shortly after, the Nicholas Brothers appear (still only in their 20s). Fayard and Harold bring the rhythm of the music alive with every element of their bodies. The number builds via the use of their famous “no-hand” splits (exactly what it sounds like), which are surreal in their seeming impossibility. When the routine ends with the brothers descending the stairs by way of leaps and splits, it’s pure magic. 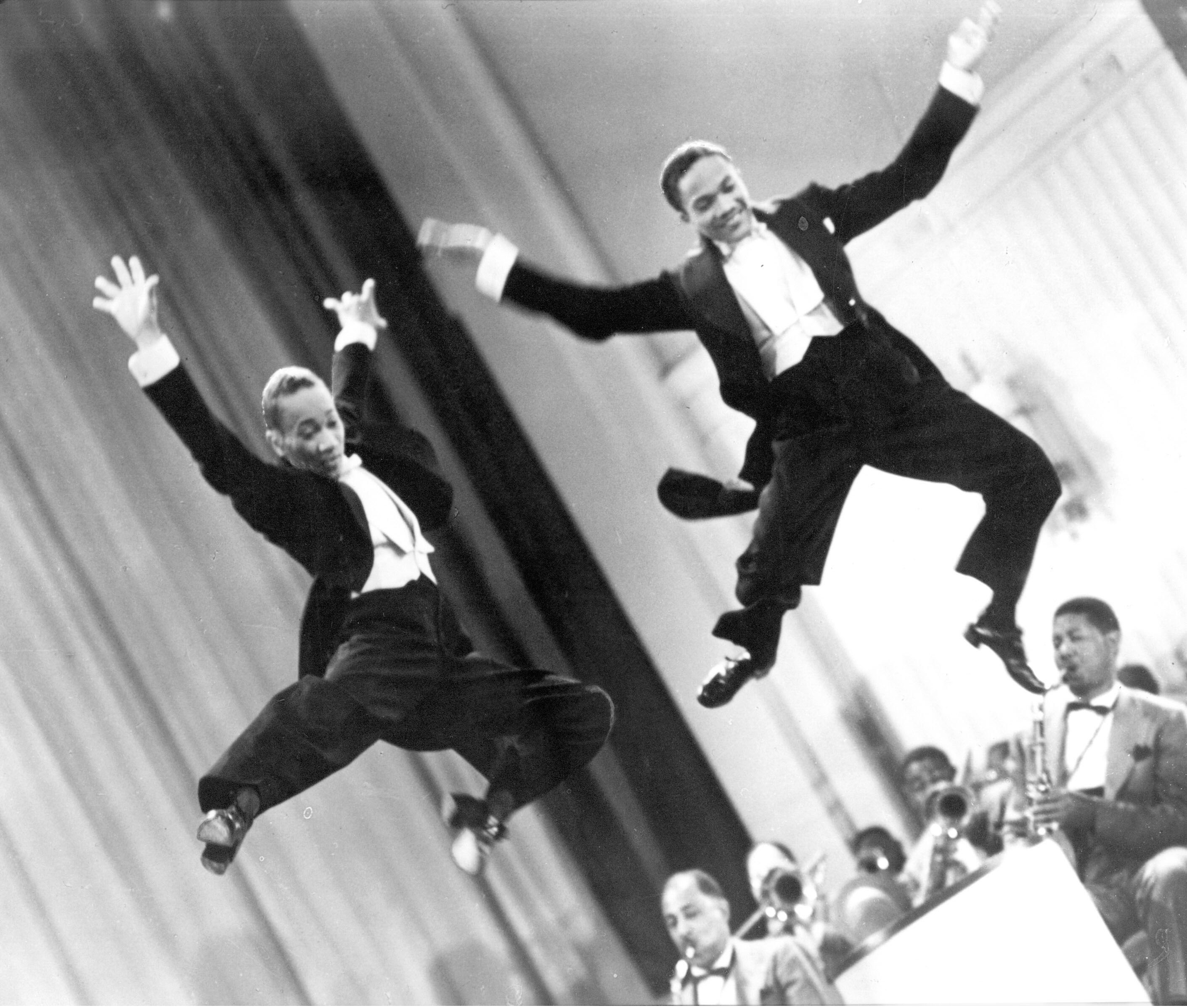 While the Nicholas Brothers are primarily thought of as dancers, they were also skilled singers. This is evident in a routine like “I’ve Got a Gal From Kalamazoo” from the Fox musical Orchestra Wives (1942). The number opens with Fayard and Harold, dressed in matching tuxedos, singing with their usual playful charisma before moving into the dance proper. While the choreography emphasizes the balletic elements of their style, the number ends with a thrilling storm of flips, leaps and splits. What is always striking about a routine like this one is the fact that the duo is completely in tune with each other, while also letting the quirks of their individual singing and dancing styles shine through.

From today’s perspective, watching the Nicholas Brothers is a complicated experience. On the one hand, their brief film appearances are a sobering reminder that the freedom to burst into song and dance beyond the confines of a stage was not always a right but a privilege. Imagine what else they could have done onscreen had they been allowed the same liberties as white performers. On the other hand, it’s never too late to expand the canon and strive to give visibility to those that have been marginalized. At a moment that calls for more inclusivity on all levels, the fact that we still have access to the Nicholas Brothers’ work is important. Not only were they two of the greatest dancers during the heyday of the musical genre, but today they provide the perfect antidote to the Trump-era news cycle — vibrant physical joy.

Kate Saccone (@ks2956) is based in NYC. She’s the Project Manager of the Women Film Pioneers Project at Columbia University.